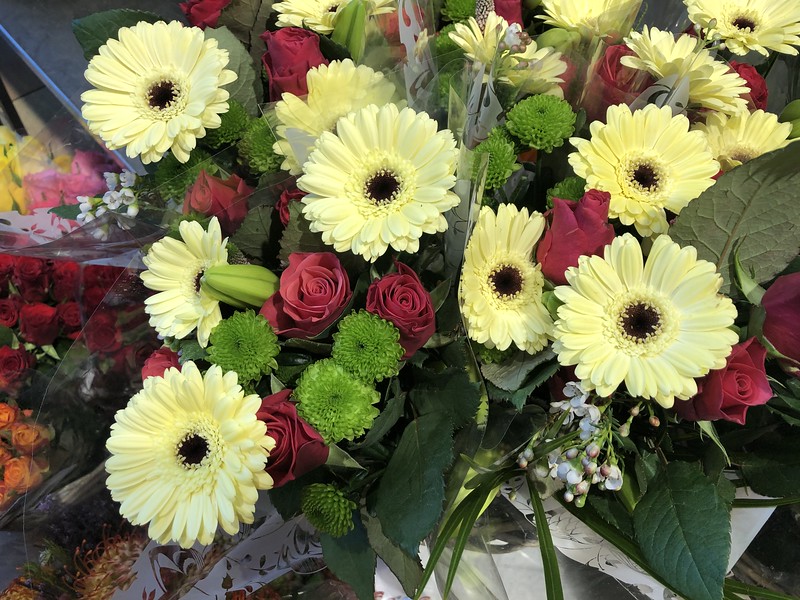 There seems to be a it of everything here. I am not sure what the yellow flowers or green flowers are, could be chrysanthemums, but in between are a few roses.

The local railway splits our village in half. This is not our village station but the one before. On the right hand side behind the bushes is the part of the village where I live, and on the other side of the road and rails, is the top half of our village.

Is there a difference? Not really, although the left side of the village over the road has a backdrop of the Jura mountains.

A photo from this afternoon and a long path ahead. I have often walked/wheeled along the way and one day it might be my last path. It is the entrance to the town cemetery, although the big limousines usually take the path on the other side leading to the chapel. There is more room and enough parking space. Yes, there are paths and paths.

RDP Saturday: The Path Ahead 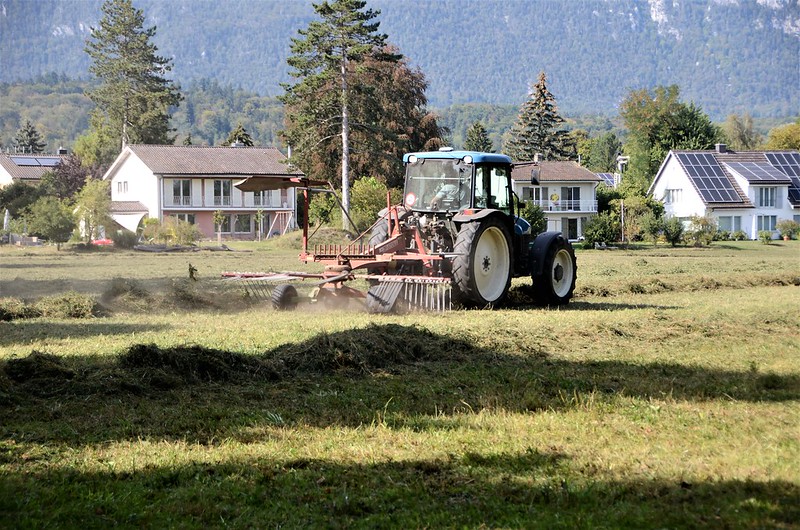 View from a wheelchair when travelling

The weather has not been so good at the moment, but I have been lucky. It rained mostly during the night and morning. I only go on my wheelchair journey in the afternoon, mainly for shopping, perhaps a little sightseeing, and so could avoid the wet weather.  I do not really know how an electric wheelchair would react in wet weather, so I had a look in Internet. It is as I suspected, not very advisable due to its electronic parts.  However, up to now I have had no problem with rain and could avoid it, so life has continued as it should.

This morning when I looked outside it was again a dreary grey sky with a few heavy clouds and suddenly as I am sitting in the kitchen, I saw that the sun had appeared, Naturally I grabbed my camera and took a photo. It was s little short lived and disappeared after ten minutes, but arrived again.  I think the rain might stay away today.

Anyhow I managed to escape into town yesterday afternoon to organise my week-end shopping. There are never large crowds in town, corona or not, but it now looks like a normal afternoon and not a ghost town as it was during the months of lockdown. Our lockdown is now at a minimum and carefully we are approaching normality. The stores still have restricted entrance, although I have never had a problem. I think most people like to do their shopping in the morning. I have thought about it, but it would be too much stress and I think Mr. Swiss does not mind me disappearing in the afternoon for an hour (or two?).

I got my second delivery of goods yesterday that I had ordered from my local store suppliers and now am well stocked up with the bulky and heavy goods.  Luckily No. 1 son was at home and helped me to put it into my storage room in the cellar. Actually it is my laundry room, but has plenty of free space, even with a deep freezer and washing machine. It is slowly looking like a corner shop.

Thank goodness for computers. I have discovered that I can start a new order on the computer and add to it now and again. When I am ready I can close it and officially order which makes it a lot easier than making lists. I have enough lists in my life at the moment.

As I was wheeling through town on my way to the store I noticed the pigeons were quite busy looking for food. There was a lady sitting on a bench nearby eating a sandwich and they were waiting for the bread crumbs. Today no shopping to do, but I must go into town to the cash machine. I just wish they would make them a little lower. It can be quite complicated from a wheelchair. Otherwise I am freed from shopping now until Monday afternoon and that is not bad when I think what I have managed with my new carless life.

And now to carry on as usual. I noticed my climbing roses in the garden are no longer climbing and due to the weight of the rain on them are slowly becoming ground cover. I have already organised support, just a matter of doing it.

Have a good week-end, take care. I leave you with a house row from the outside edge of our town.