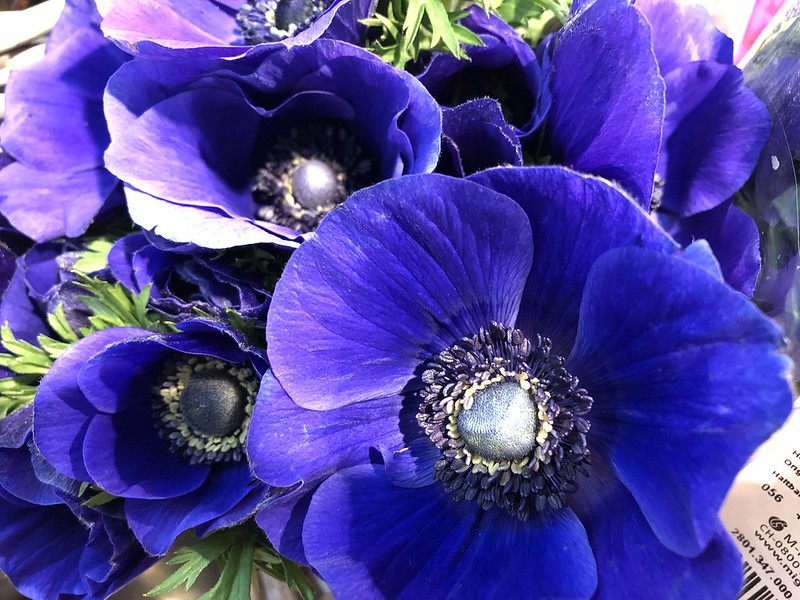 Do they give them vitamins to make them grow so big?

I was on a wheelie through town this afternoon on my way home from the store and then I realised something. If you plant a crane in the middle of a barock town, when streets were planned when cranes were not even a thought in Leonardo Da Vinci’s head, it makes everything else look smaller.

It has a diminutive effect and our town is no longer a town. I suppose it becomes a townling

I was in town this afternoon. Actually I did my shopping in the store just on the edge of town and after giving up my two bags to be brought home I usually wheel through town. Shopping is done, no more duties and just take my time to enjoy the hustle and bustle of the people.

I then looked up, probably searching for a subject for a quick shot with my mobile phone camera and saw him. Was he watching me or just looking out of the window. You just cannot trust anyone today. I am sure he was a spy. 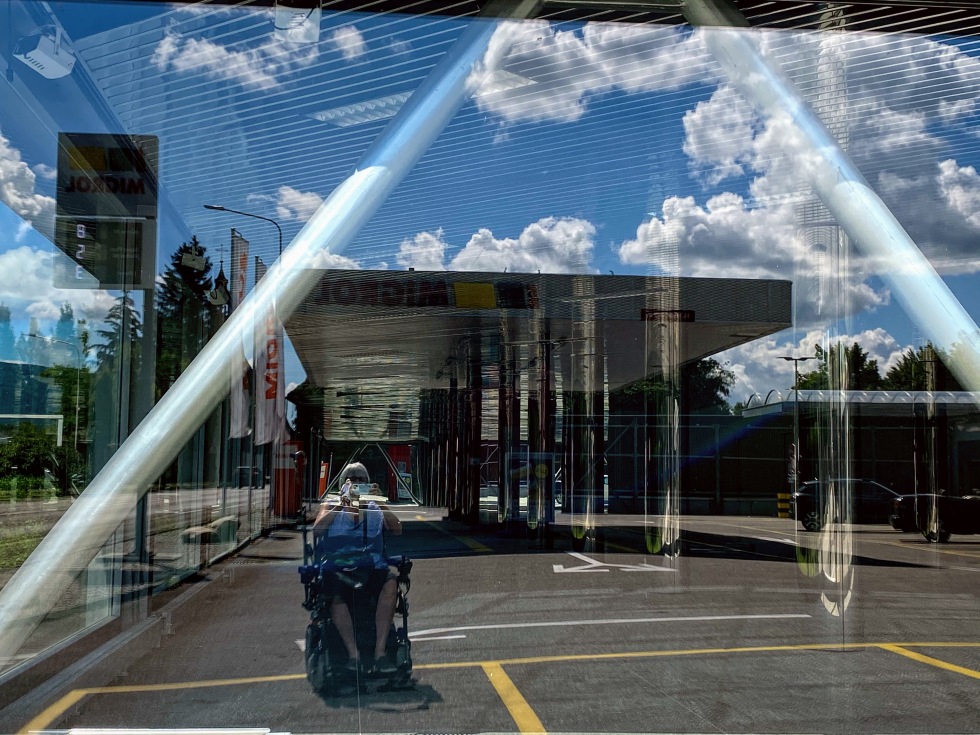 There is an empty room next to the store where I do the shopping. It is probably still waiting for someone to move in, perhaps another store. Anyhow I did a small experiment when I left the store and took a photo, which looks very unusual. As it is all glass and polished surfaces you see the mirror reflection of the parking lot with me in my wheelchair and the sky. in the background. You can also see the supporting steel pillars in the empty room and part of the road at the side. All very complicated and highly unusual. 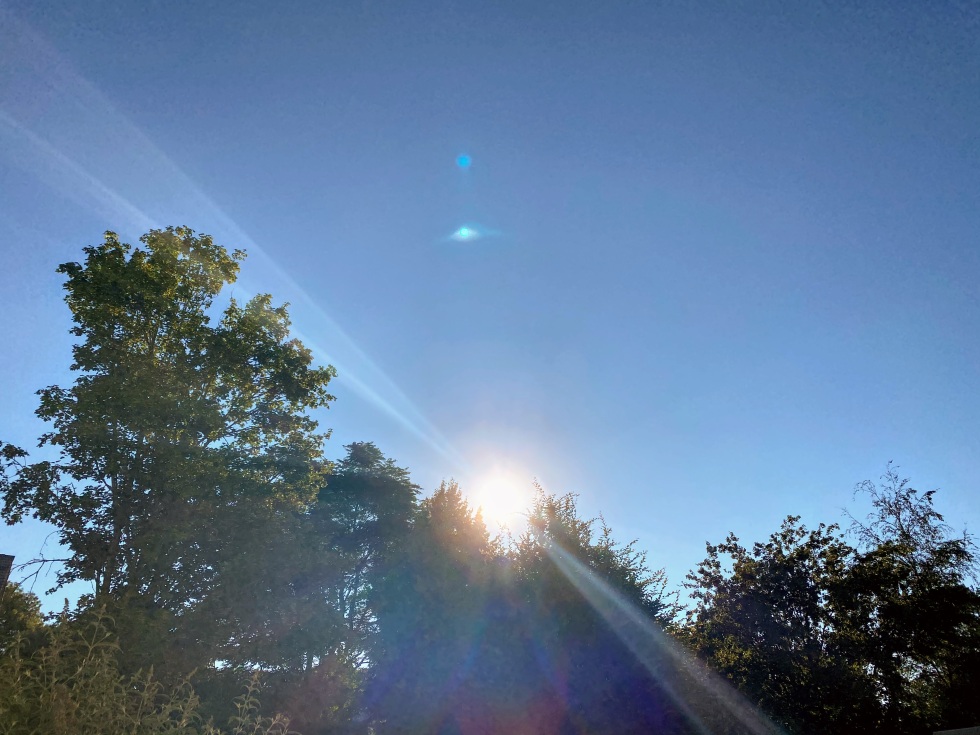 As usual my first picture of the day. Some might have missed me yesterday, but one thing led to another and I never got round to writing anything. There are days in the life of a blogger that are not as they should be and yesterday was one of them. It was a cleaning lady day which means that I am always later with my blog. It was also the day when I got my new card for my post account. That was no problem and everything was OK, but ….. my machine that reads the card for entrance to the account told me it needed a new battery. I did not even know it had a battery. After loosening the screw I found it had two round batteries, the sort you never have at home as they are something a little different. I had no intention of going anywhere near a battery store yesterday so I sent No. 1 son on the quest, but he only goes into town in the afternoon.

In the meanwhile I wanted to upload an app on my telephone and it would not accept my password which I had not changed, and never changed. Again a misunderstanding with Apple and I managed to solve this hurdle in the afternoon with connections to my Mac computer and a new password. In the meanwhile Apple had blocked my account on the iphone.  I find cautions are very good, but they can really get a little bothersome, very bothersome, often. My batteries arrived via No. 1 son and then I really had to catch up on a few payments and other organisatorial stuff. Eventually it was evening meal time and after eating I really had no power left to write my blogs.

I also have a problem with my one and only cat. Tabby who is now 18 years old and an elderly lady. She sleeps most of the time. She has kidney problems and takes medicine daily  and has special food, but she has stopped eating for almost a week, although she still drinks. I contacted my vet and we both decided that Tabby’s time is approaching. I could take her to the vet to have her kidneys washed, but we both agreed that it would just be postponing the inevitable. An agreement was reached that when I felt it was Tabby’s time the vet would call past and send her to the eternal corn chambers for a life of mice catching.  Tabby has no pain, and just sleeps so I will leave her to her own thing as I do not want to bother her too much. I will probably be closing her blog in the next week some time. 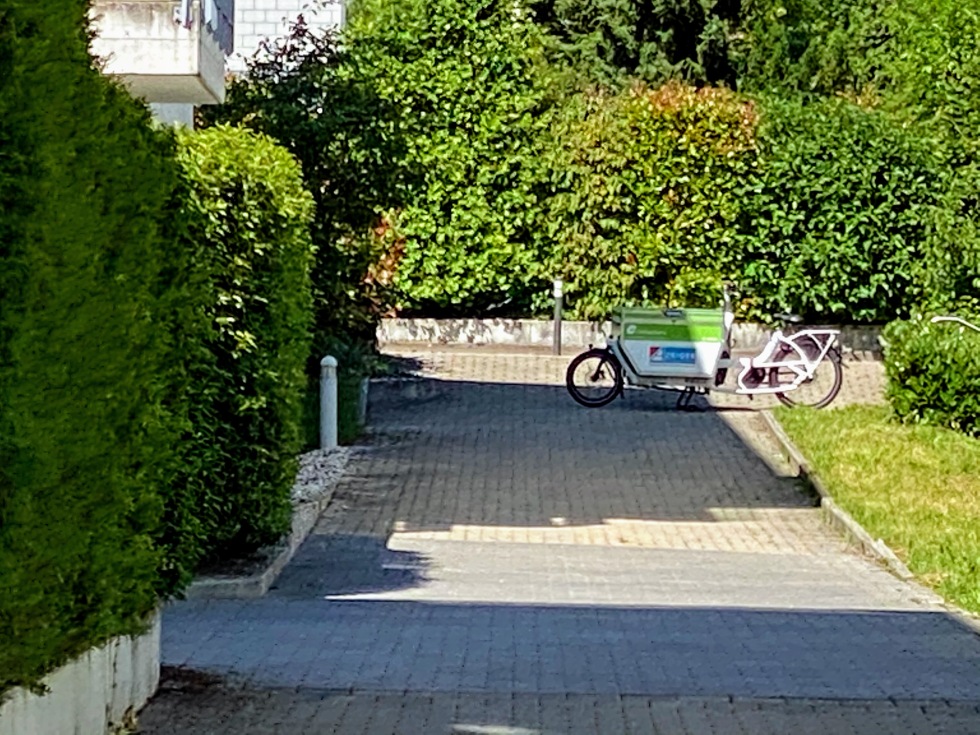 Otherwise life goes on as usual. My last shopping trip was Monday. I just went to the local store for a few things, although my few things are often more than a few things. Anyhow I had two bags full which I had given to the collector guys to take home for me. As I was wheeling on home in my chair I had to move to the side of the path to let him pass me. We greeted and I laughed and said he was probably on his way to me and he said he was. As I turned the corner I saw that he had parked his bike with attachment for the shopping on the path whilst bringing the bags, so now you can see how it is done with his bike.  They are such friendly young men. 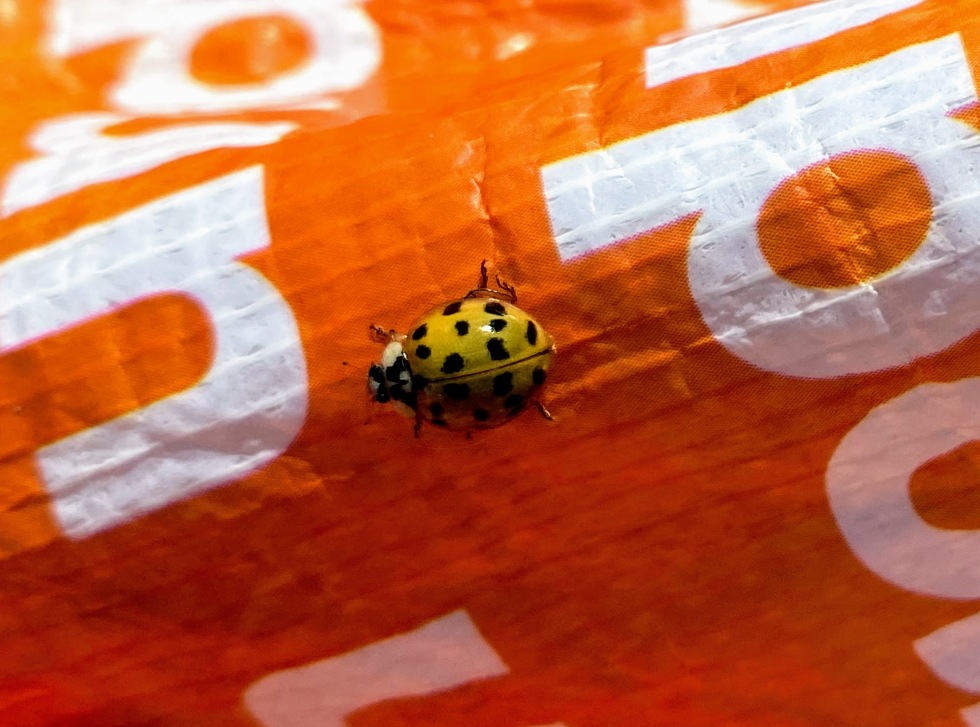 Insect life is also getting interesting and this little one settled on my shopping bag on the way to the store. I think he was just enjoying the ride. Looks like a ladybird, but the colours are more hippy like. Perhaps it is the new fashion for bugs. 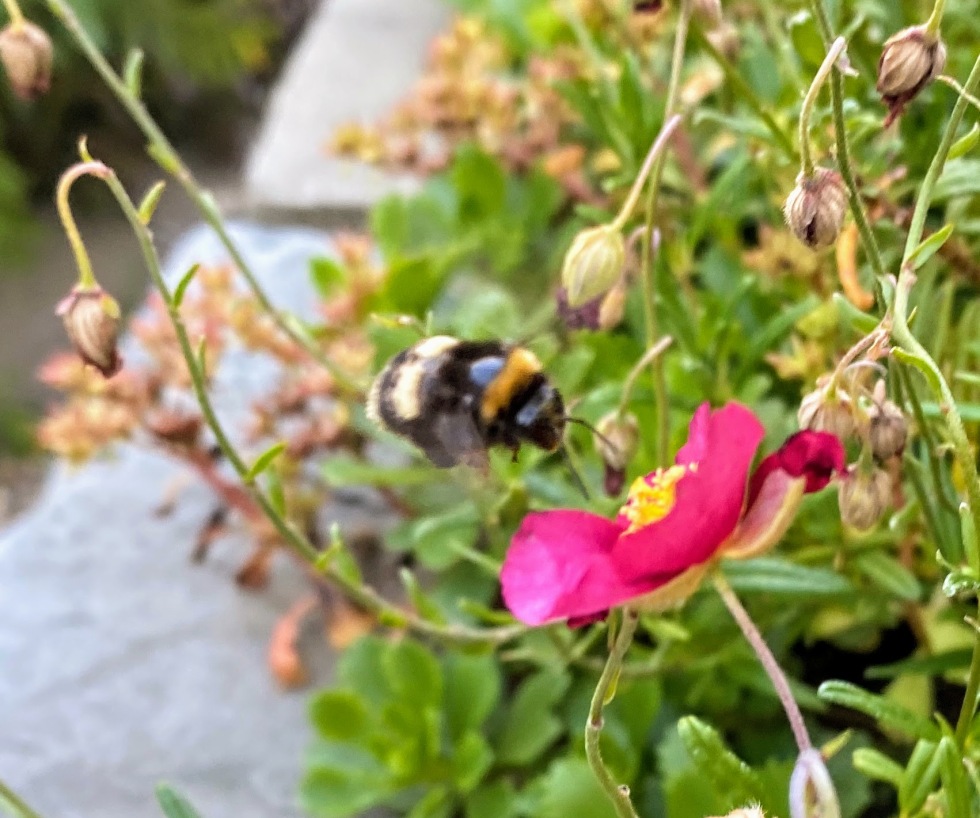 The bees are also getting quite busy in the garden and now the big boys and girls have arrived to reap the benefits of the pollen.

And now I should move on, although I am not in a hurry to go anywhere. This afternoon is the big escape when I am on my way to town for food hunting. Have a good day everyone, may the sun shine where you are, although those over the pond are probably in the darkness of the night.

The montbretia are now flowering in the neighbour’s garden. 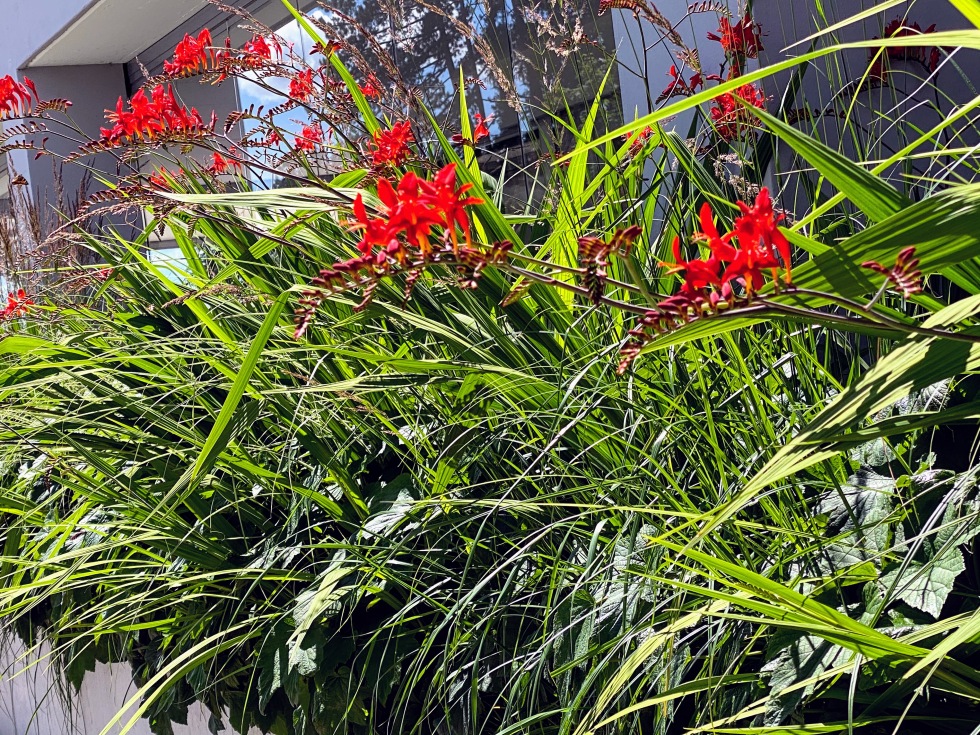