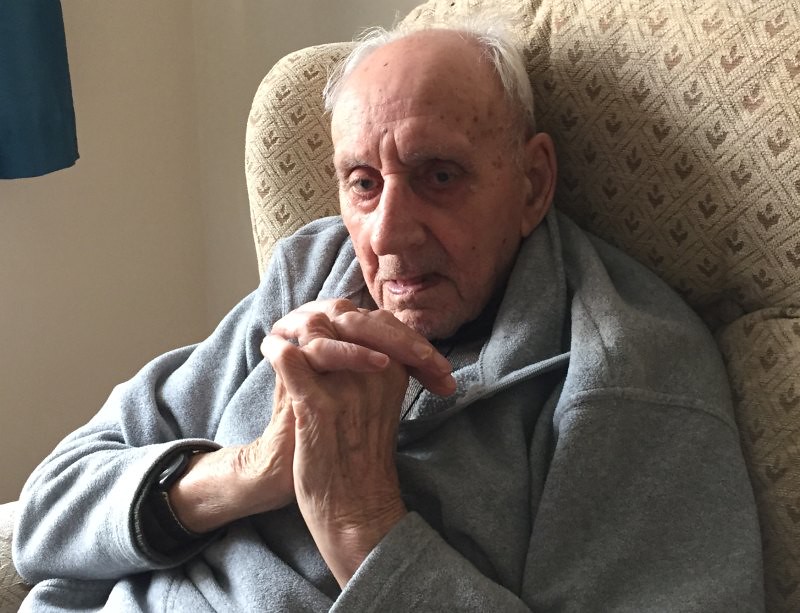 Dad, 100 years old, now another 8 months more, born 24.09.1915. It seems he was in a thoughtful mood on this photo. It was an exciting day: a telegramme from the queen, congratulations from all in the care home where he lived and the man of the day. Dad was never really a monarchist, he did not mind the queen, but he had his doubts. However, on that day, he was a fan. He looked at the card every five minutes, probably  beause he still could not believe it. Now and again he said “100 years old”, to remind himself.  Dad was not a statesman, a famous politician, but he was my dad. Served for five years in the second world war because he had to, one of those that the government told “do yout duty” and he did. Always paid his taxes, although money was not always in abundance. Enjoyed a dance at a party, liked a little bet on the horses, but never too much. We had many discussions, not always the same opinion. He never had a bank account, did not want one and the word cheque book was a no go. He was a man of paying everything by cash. He refused to have a micro wave, preferred his oven, until the time came when it was the only solution for him to warm his meals. Afterwards he loved his microwave, no problem, but that was dad. He never really believed anything unless he saw it with his own eyes, on the other hand he seemed to believe most things that the newspaper wrote. My dad sunk in thought, 100 year thoughts – who knows.