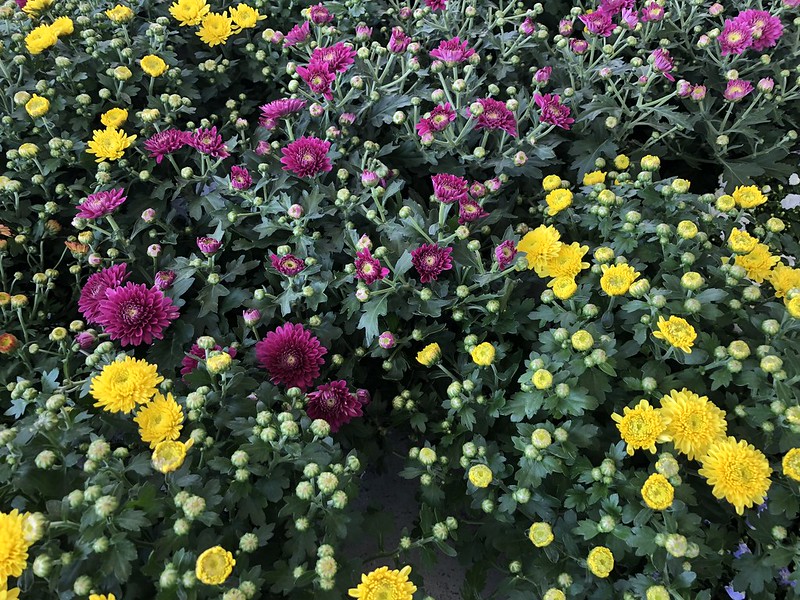 I was looking for a collective noun for chrysanthemum, but found none. So let’s call it a plethora, or a gaggle, or just a family. 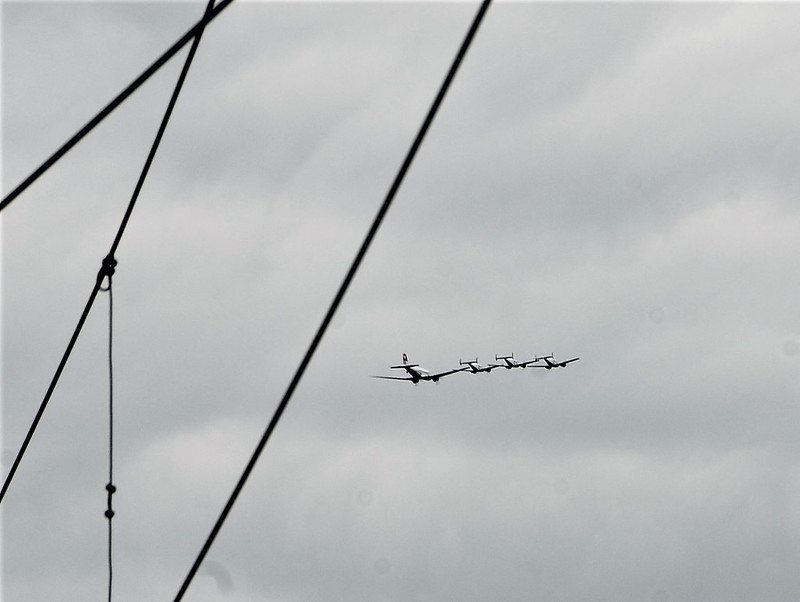 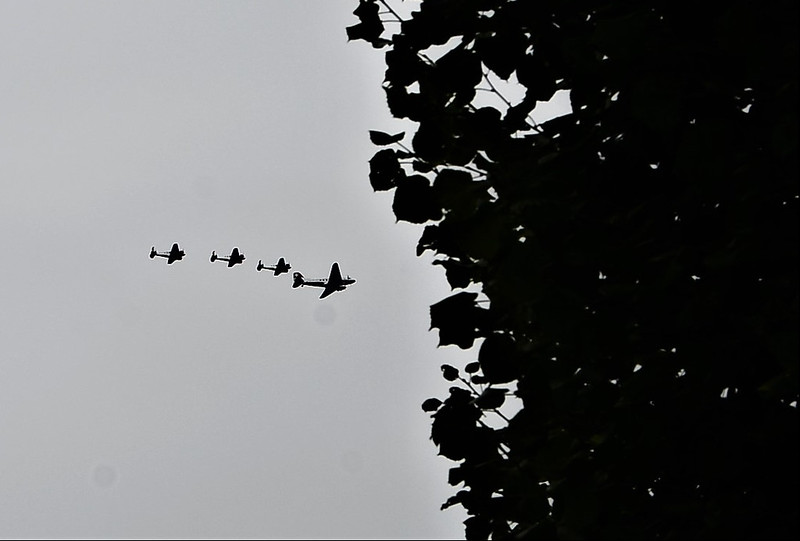 A Photo a Week Challenge: Getting your ducks in a row 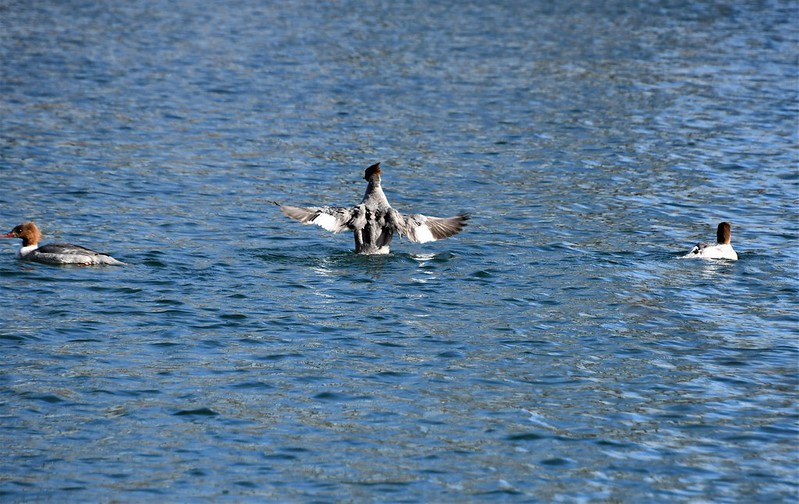 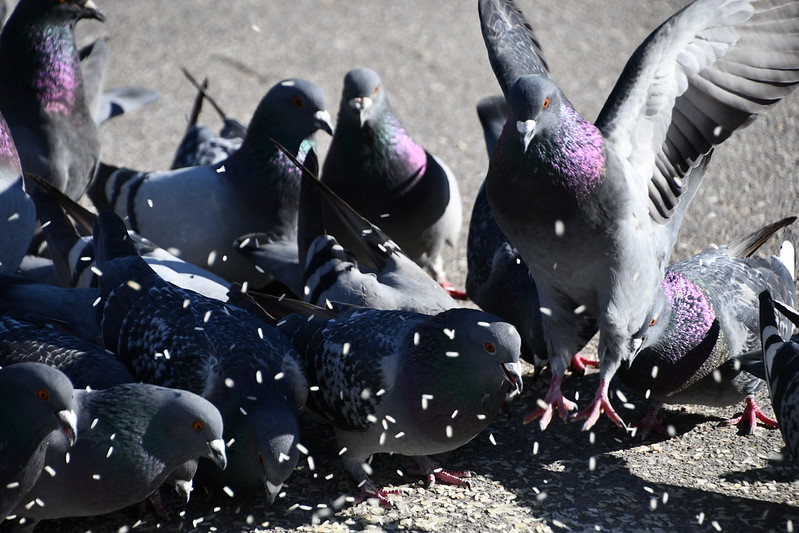 It was raining birdseed and the pigeons were ready to pounce. 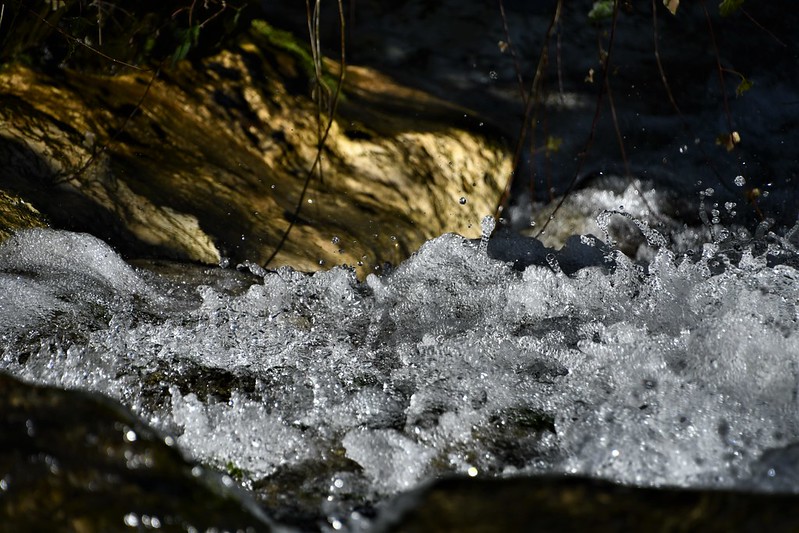 Rushing water in a stream 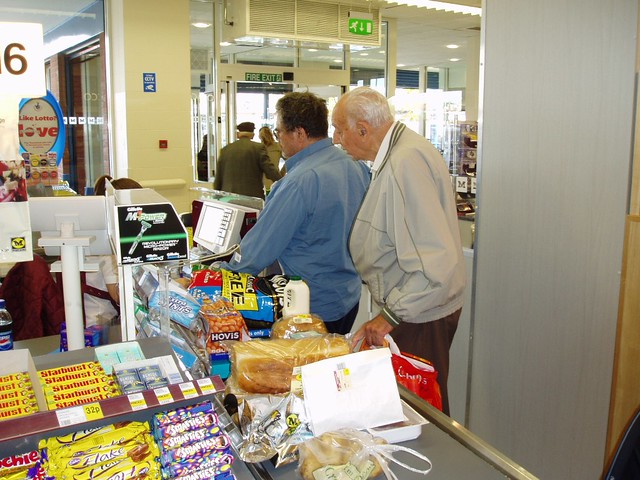 The grey haired man in the queue is my dad in his supermarket. He was then 90 years old, still living in his own little council house and I would pay a visit once a year which is when I took the photo. Dad was very serious about shopping. He would look at the bargains and if it was a special offer he would make the most of it. He would save every coupon in the newspaper or those on leaflets and when he had enough would mail them and his rewards was perhaps a free jar of coffee (which is never really liked) or perhaps a bar of chocolate – the free offers of the day. I was amused to see how he would carefully organise it all at home and now and again check to see if he could exchange them. Since then dad has moved onto the happy hunting grounds of the eternal supermarkets but I am sure he is still collecting.

I was amused by his collection fever, but who am I to laugh. There must be something in the DNA somewhere. I am now a golden oldie, not so old and golden as dad was then, but since I now deal with the shopping on my own without Mr. Swiss as he can no longer move so well. I have a new hobby. Our supermarket chain gives points for the amount of money you pay at the cash desk. This goes further, and you might have a 2x coupon, meaning double points. Today they gave 4x in honour of Spring. Then you can get certain items with 40x points. The coupons are given in the supermarket, but who needs coupons, I do it all online with my iPad.

This is paying off. Since I have begun to study the system I have scored double as many points as usual. There is of course a system. I must be careful not to activate too many of these 2x points on my iPad, otherwise they are all used and I have nothing left. You only get the 2x points if you pay 100 francs or more at the cash desk, so do not activate everything. Always leave a reserve somewhere.

It is a real thrill to buy something where 40x points are available, that really puts a jump into your coupon value. My dad would be proud of me and I am having fun. Now and again I check to see how my profits are. Because I activated the 4x points today it means that I still have an extra 2x to use next week. Today Mr. Swiss gave me the task to buy cleaning liquid for his electric razor, no problem. He told me here are three units in a box. However, the guy in the store said if I wanted the three unit box or the 5 unit. I asked the price difference. It seems there was a special offer and one unit was free. Mr. Swiss was very happy with my bargain when I got home. Would he have done this if he had bought them. Of course not, he is a man and just wanted the product.

This is my new hobby. I cannot wait until tomorrow morning to see the result on my iPad of today’s supermarket transactions. Up to now I have resisted the temptation to buy something just because there are 40x points available. I really do not want to be addicted. My name is Mrs. Angloswiss and I am a coupon addict. Perhaps there is a coupon addict anonymous to treat this. 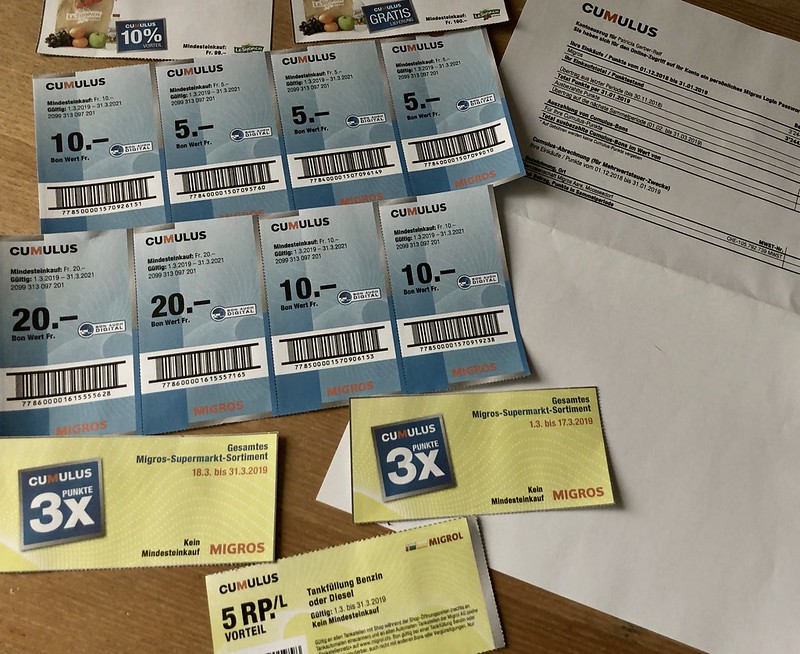 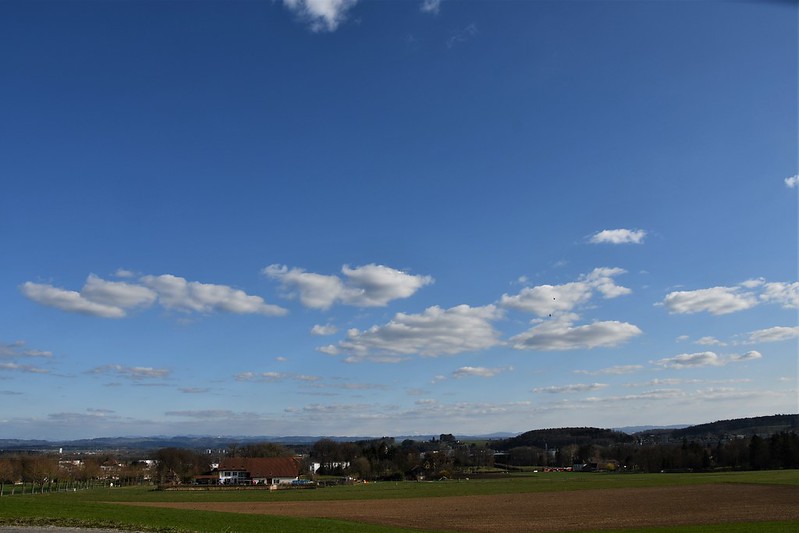 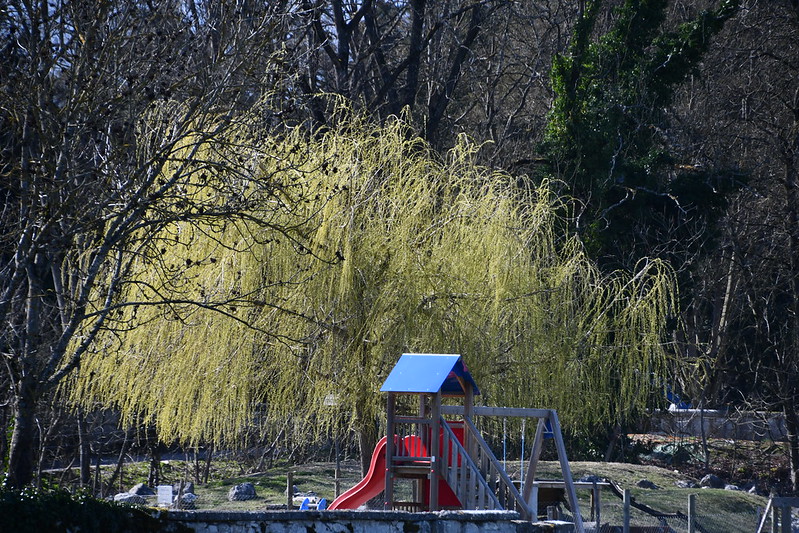 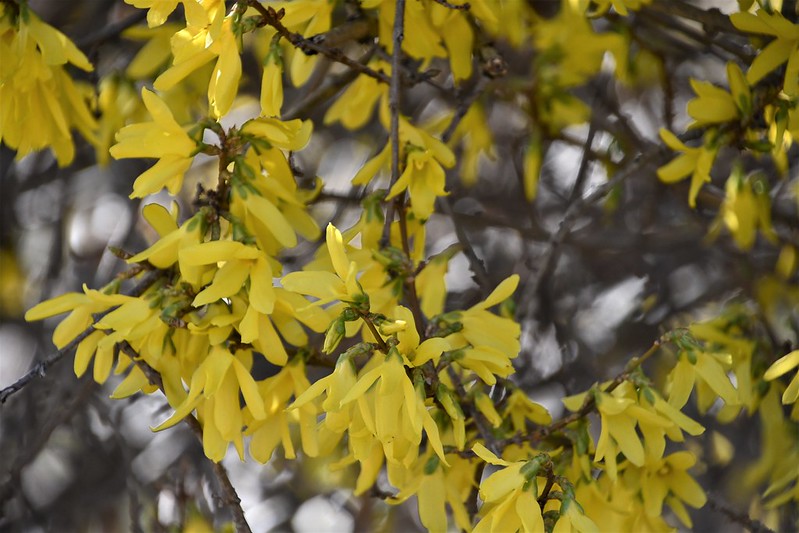 In this case I would say pictures speak louder than words. 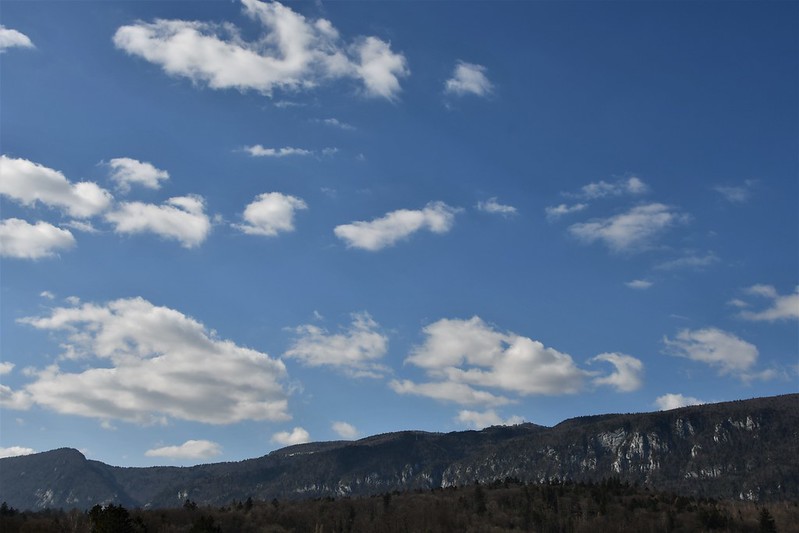 And so I decided to take a wheelie yesterday afternoon, but just in the surrounding area, Along the road, through the cemetery and onto the castle and its farm. Just the normal ride in a wheelchair, but it is Spring, wonderful weather, and I really did not feel like a visit to town –  too much action, I needed peace and quiet.

My first view is always the Jura mountains in my back yard. They are looking particularly good at the moment with a few cumulus clouds as a decoration hovering above.  At least I think they are cumulus. I never tire of this range of peaks with its vegetation. 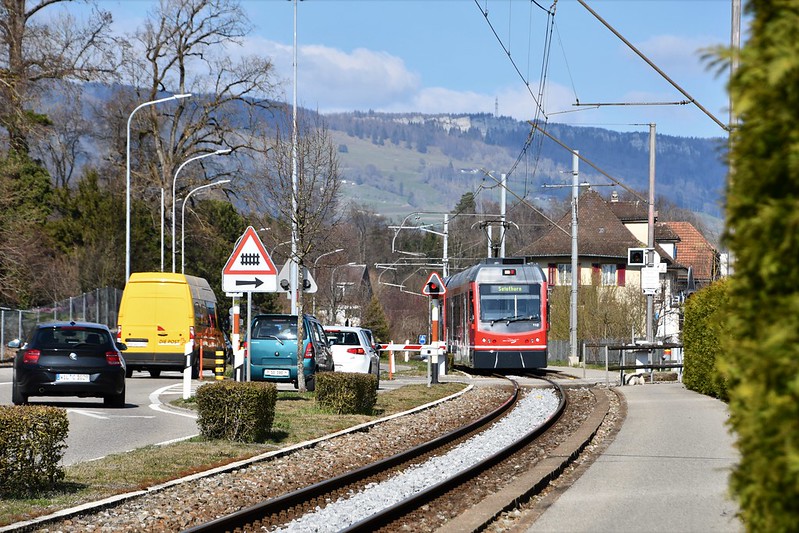 I then wheel along the path on the right at the side of the local railway tracks and even the train appeared for me for a photo. Mr. Swiss often asks if it is not a little dangerous on that path, but there is plenty of room, even if a bike wants to cross my path in the opposite direction. He might wait for me to pass or perhaps I pull over. It is not really necessary, we have enough space, but just being cautious and of course a friendly thank you and greeting to enjoy the meeting. 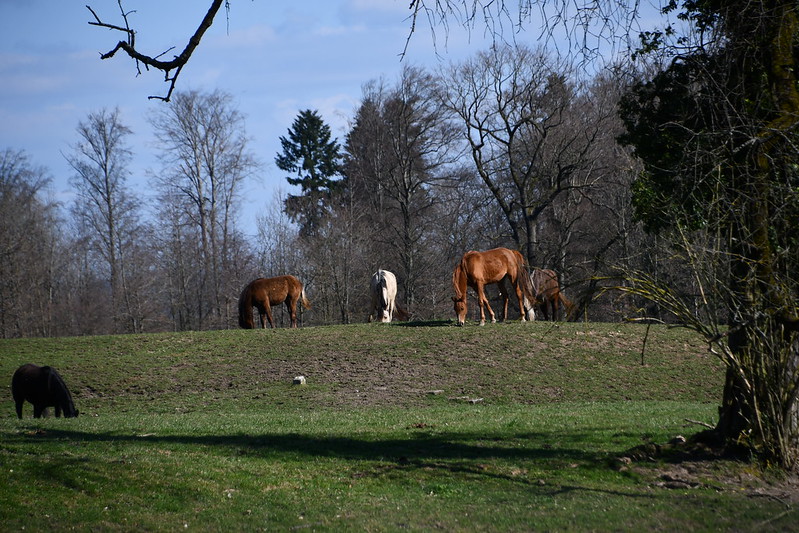 The next view is the farm behind the fence to the railway lines. They have horses that are usually grazing. Now and again there is a new arrival, a foal, although it seems they are now grown.

I eventually arrived towards the castle and noticed a big bird flying overhead. Thanks to my new camera and lens I can now capture the birds in the air. 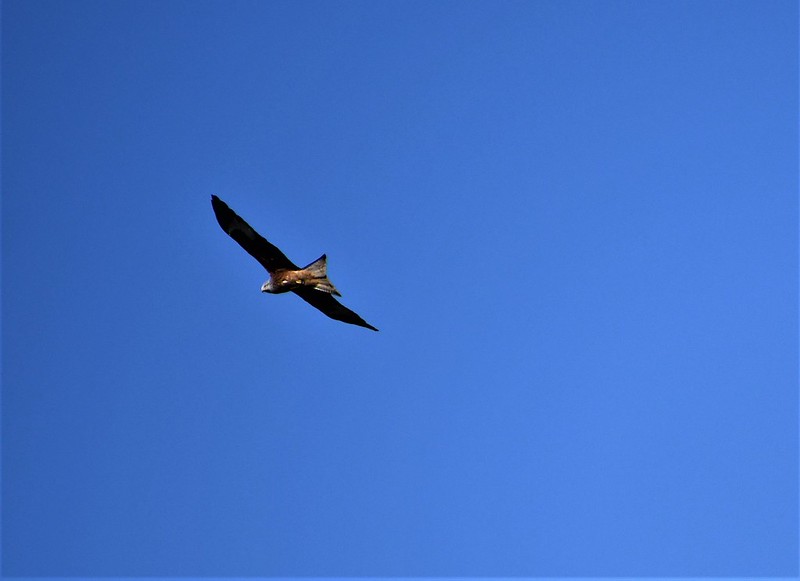 So what was this big bird? Question to Mr. Swiss and being a one time country boy growing up in the area he immediately identified it as a red kite, known as a “milan” in our area, because of the forked tail. If it was a straight tail it would have been a buzzard apparently. It was fascinating to watch how this bird weaved its way above. Life can be so great sometimes. 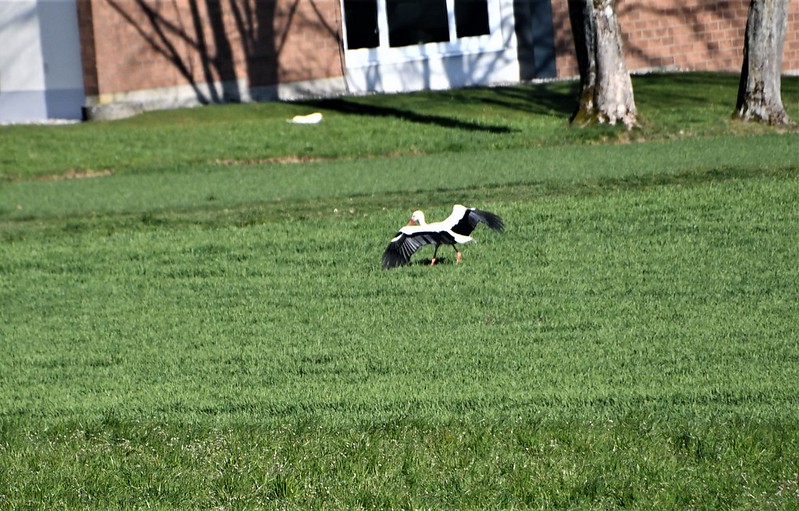 The next big event was seeing a huge white bird overhead that landed on the famers field. I suspected it was a stork and my photos proved it. We have a colony near us and they now and again nest on high places. I suspect this one was from the nest on the tower next to the high school. I often see her sitting there probably egg hatching.

The bird show was over and I was wheeling on my way near the castle when I saw a friend of ours. She often takes a walk around the castle in summer and we had not seen each other all Winter, so had a few things to catch up on. We had a nice lengthy conversation and I had to break off as I told Mr. Swiss I would not be gone long, and did not want to worry him. My friend is actually an acquaintance of Mr. Swiss but we get on so well. As I moved on to the final stretch, my telephone rang, but I told Mr. Swiss I was now on the home stretch. 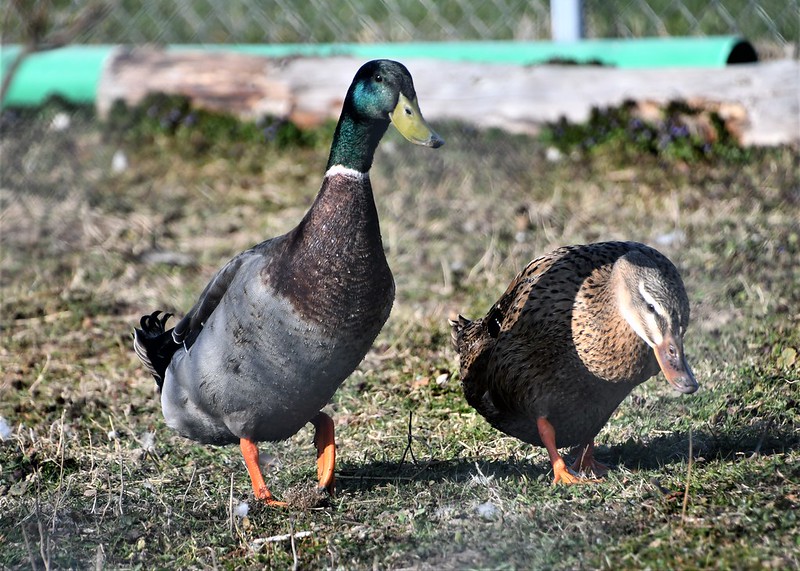 Of course I looked in on the ducks before leaving. I saw no chickens and I fear that it is again time to replace them with egg layers. Even chickens have their days I suppose: sad but true. They are probably now laying eggs in the happy hunting egg grounds.

And that was that. I had filled up the camera again with a few photos. This afternoon it is week-end shopping time and I will be let loose in the store. A least I have variety in my life. Riding wheelchair or car according to my destination. No. 1 son will be at one of those open air rock concerts Saturday evening, so one less mouth to feed and a romantic twosome for the evening meal.

I have no exciting plans for the week-end. Perhaps a trip to town or just watching my garden grow, and that is interesting at the moment. 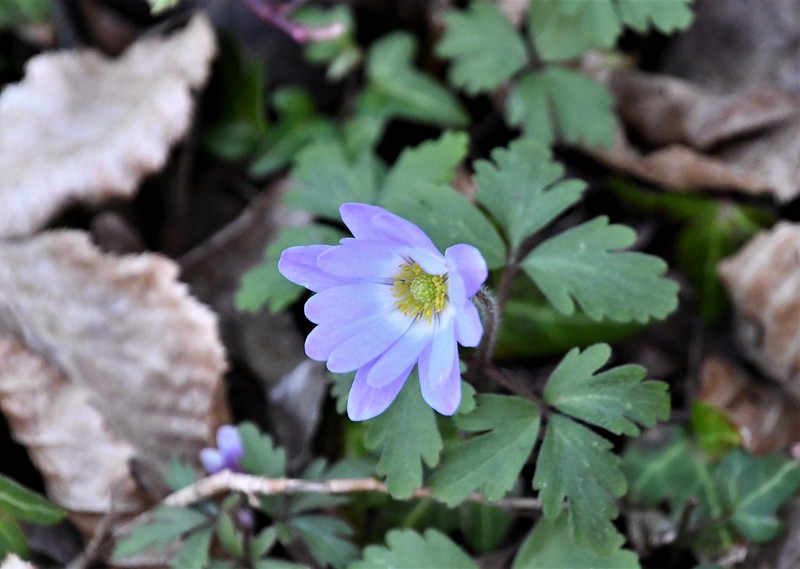 I really do not know what this flower is, but they arrive in my garden every year in Spring in patches. Perhaps they are wild, I just call them blue daisies. And now I wish you all a good week-end, enjoy and I hope your Spring weather (or Autumn for downunder) is behaving as mine is.