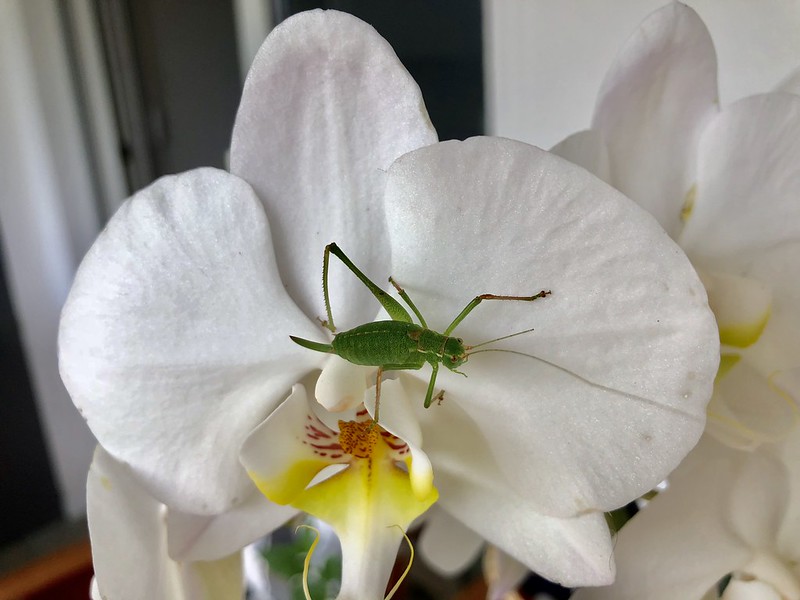 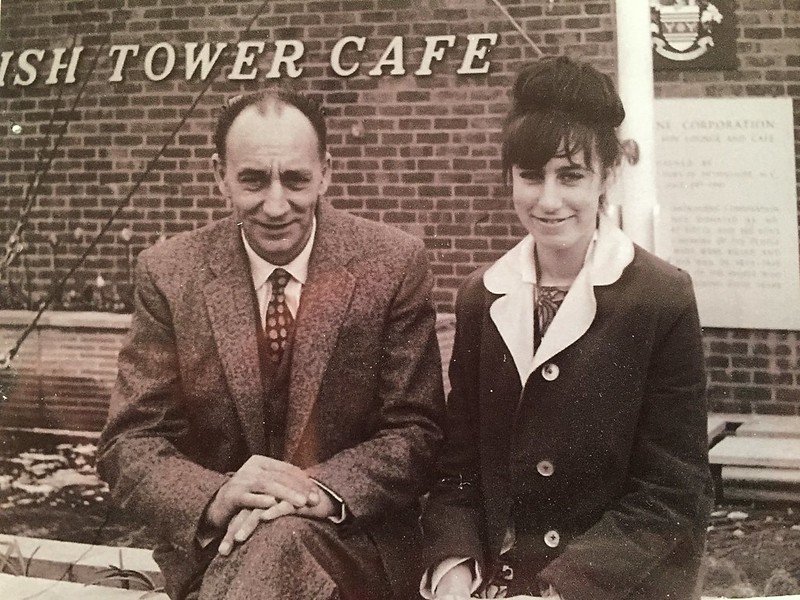 It must have been around 1962, dad being 47 and me his teenage daughter of about 14 years. We were on a visit to the english coast, Eastbourne, where dad’s elderly sister was in a home.  Of course you dressed for the occasion. I was at the age where I was making make-up discoveries concerning lipstick and eye shadow and I was actually wearing a dress – no blue jeans here. I seem to have the Amy Winehouse look. Dad? of course he had his tie on, in those days you wore a tie if you wanted to look decent. Dad even had a suit on, so it must have been a special day, although it was the way to do it in the sixties.

I remember when dad wore his first jeans. No, they were not blue, he called them his silvers, as they were a light shade of grey and of course no crease in the trousers, something completely different for dad. He only wore them on holiday. They were not the working class London style, but we were dressed for the occasion.

Rock and roll had taken over the music scene and the Beatles were probably still in short trousers at school.

Somehow I miss those days. Today I would not be seen dead in those clothes and even dad no longer wore a tie in his progressing years, although I know if there would have been a special occasion, unfortunately only burials at his age, the tie would have been brought out of retirement, a mark of respect.

I would like to be a teenager again, wearing my stiletto heels and tight skirts, which were uncomfortable, but necessary to keep up with the style.

Today sneakers, trousers and a nice comfortable wide top does it just as well and honestly speaking more comfortable. Perhaps it is just my age speaking. 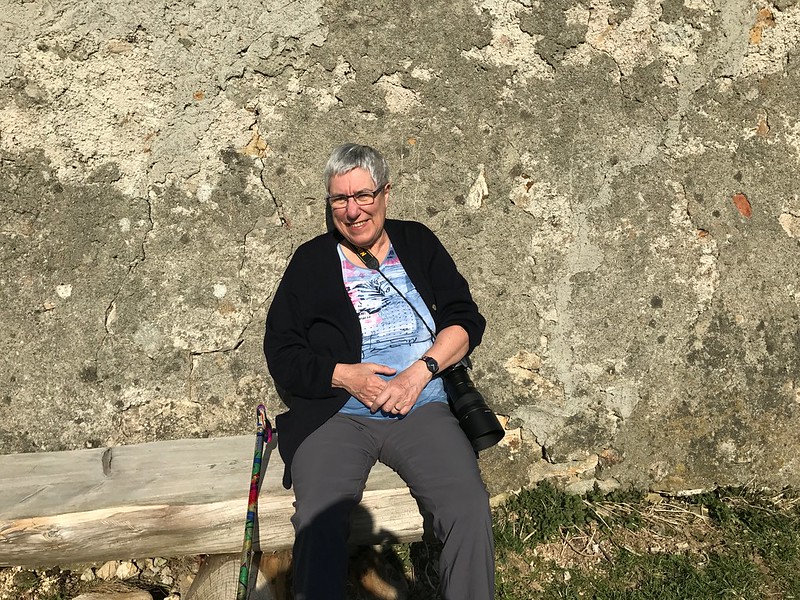 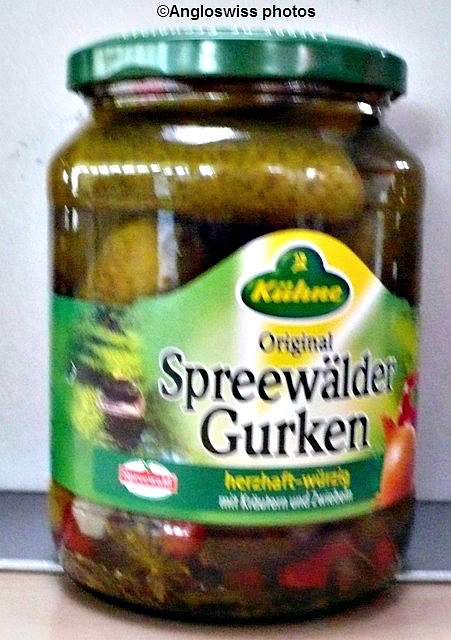 Here they are, my all time favourite pickles: the Spreewälder Gurken. Never heard of them? The good news has not yet spread across the pond or reached other countries in  the world? Only we privileged Europeans can taste their benefits?

There was once a film  concerning the re-unification of West and East Germany Goodbye Lenin telling of a mother that is dedicated to the socialist cause and falls into a coma shortly before the 1989 revolution. When she is revived eight months later, her son attempts to protect her from fatal shock by concealing the fall of the Berlin Wall and the collapse of communism. That is the basic story, but you can read it yourself in the link and I would highly recommend the film which is also available in the english language. One of the articles the mother wanted was her favourite pickles, the Spreewald cucumbers, a speciality of the area known as Spreewald, which is a forest area with many streams.  The son found an old glass, bought normal pickled cucumbers and filled them in an empty glass attaching the label from the old glass showing that they were original Spreewald  pickled cucumbers.

It was a good film, I watched it a few times, but what was so special about the Spreewald cucumbers, so I decided to find out.

I was working at the time in the export department of a Swiss company and newly liberated East Germany were now our customers and we had visitors. I was dealing with them and spoke about the Spreewald cucumbers. Of course they told me they were the best and on their next visit they would bring me a glass. A month later I had my Spreewald pickled cucumbers from ex East Germany as they were still being manufactured. The girls in my department were also interested, so we were all sampling these special cucumbers in the office. It became a custom that every time we had a visit from our representatives in the area, I was presented with a glass of Spreewald pickled cucumbers. These are memories you never forget.

So lets have a listen to Arlo Guthrie and his Motorcycle song, concerning a pickle now and again. 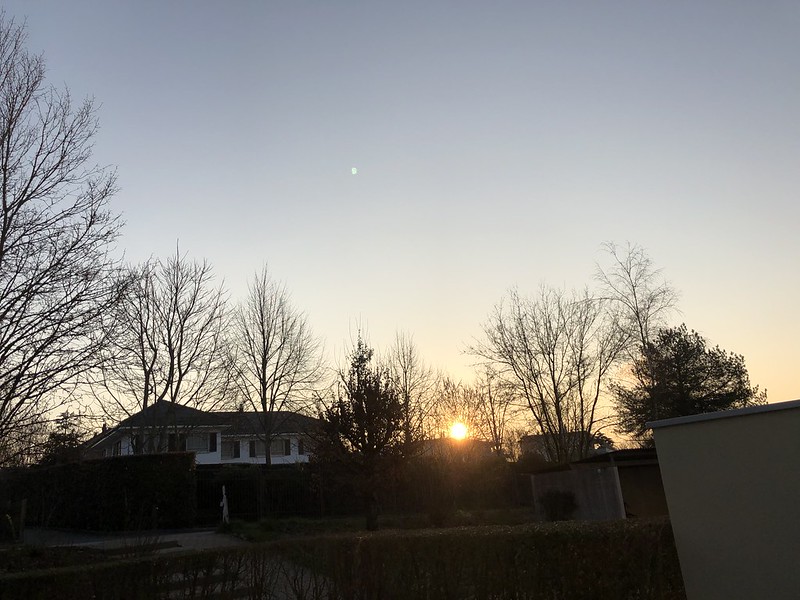 Before you all begin thinking that I stopped hugging the bed an hour earlier, it was just the daylight saving time that played the trick on me. Yes, for the first time for a long while I arose with the sun. Of course my digital appliances all told me that I was rising the same time as usual, but when I arrived in the living room the clock was showing an hour earlier. The time thief had returned and stole my hour again. However, I was compensated by the rising sun, so what cold go possibly wrong. 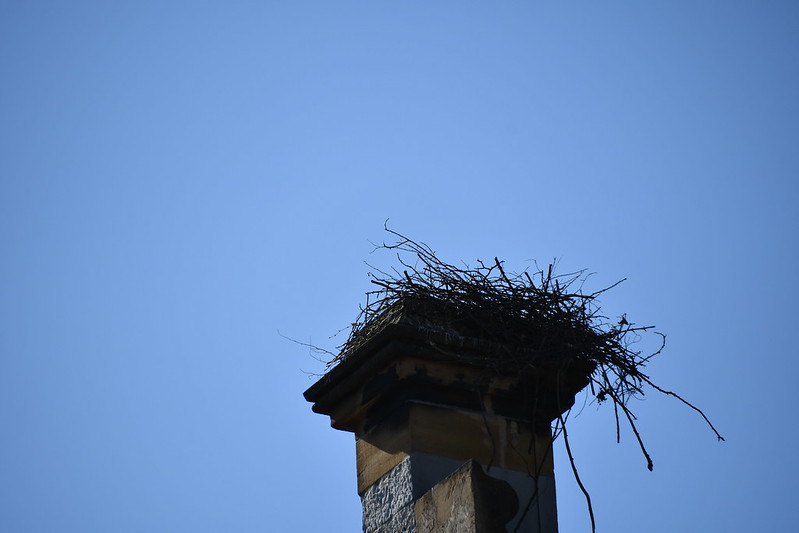 I went for a wheelie in my chair into town. One of my aims was to find the stork nest built on the chimney stack of our concert hall. I found the nest but the storks were on a flight somewhere. The authorities are not very pleased with this new creation in town, – It seems that a completed stork nest could weight a ton (metric of course). We have a stork colony in a village near us on the river, Altreu. It has been there many years founded by a teacher at the local high school. There are nesting places, about 40, available for storks, but it seems this year is a stork year and they are all now occupied with the exception of two. They had already arrived in February to claim their places. 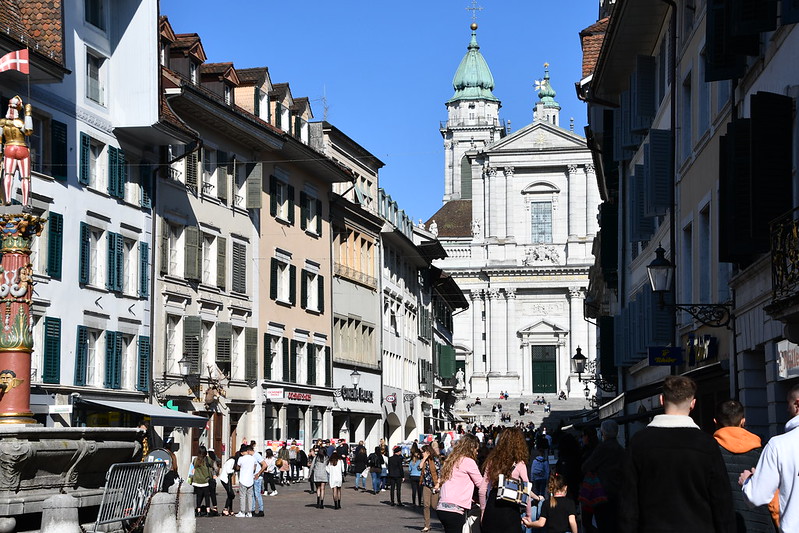 The sunny and warm weather had drawn the locals into town, and I could hear the noise of people talking as I entered. Amazing what good weather can do, acting as a magnet. The adventurous were already wearing their short sleeves and the new spring clothes were giving a show. There were even a couple of adventurous men in shorts and as I wheeled plast a house on the way from my village I saw a man working in his garden with a bare top body. Yes, Spring is here. No I did not take a photo of the man, he was not really my type. 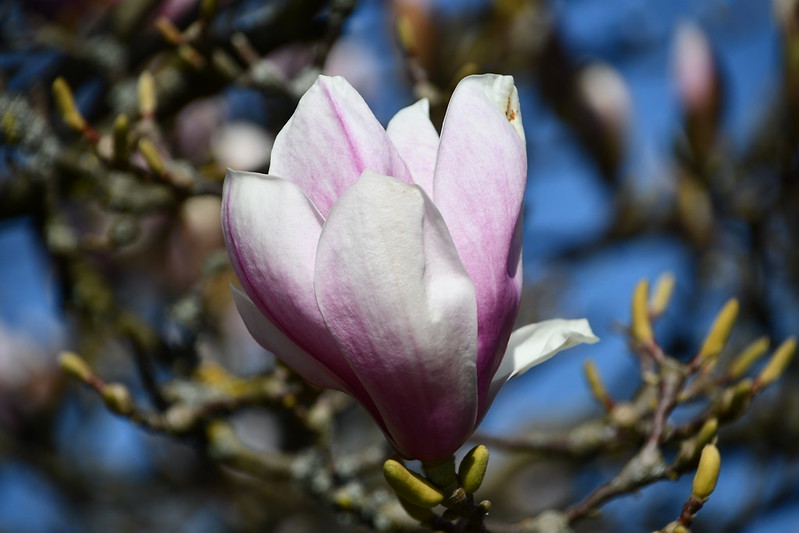 I naturally took a wheelie to the museum park to see what the magnolias were doing. They are almost there, and the buds are now opening. Next week the magnolia show should be complete. It is action time for nature. 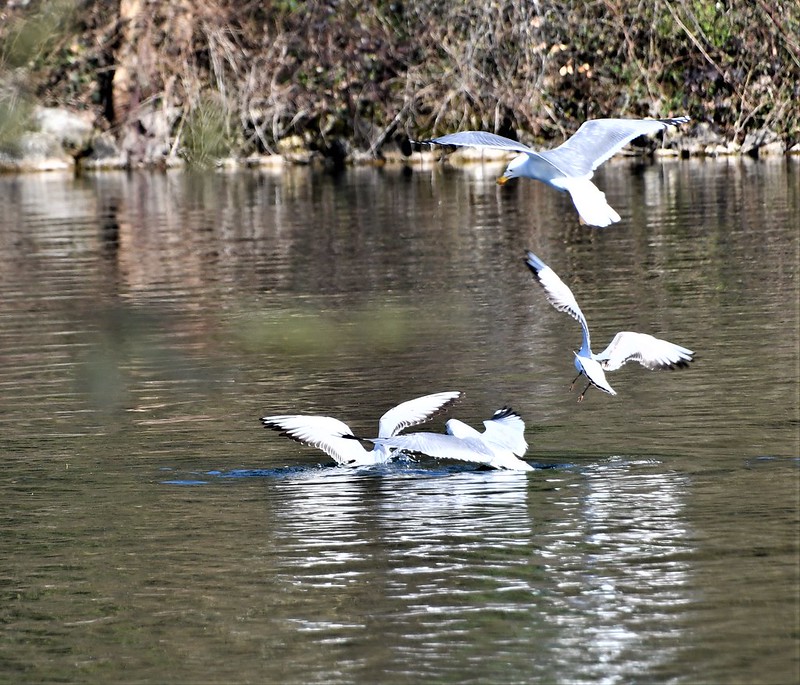 As I wheeled along the river on the way hom the ducks were also having a flight show. There were probably having a wing training session to pass the time whilst the eggs are hatching. They will have enough stress once the babies arrive with searching for worms and other such baby food for the offspring.

It was a fun afternoon and getting into the fresh spring air was a good tonic for me. The older I get the more sentimental I seem to become with spring stuff in the air. Growing up in London the only birds I saw were pigeons and sparrows and now I have a whole aviary at my disposal. We had ducks in the local parks and even trees, but it is not the same when you see it all developing on its own outside. Today I will probably be at home, but observing how my plants are growing in the garden. 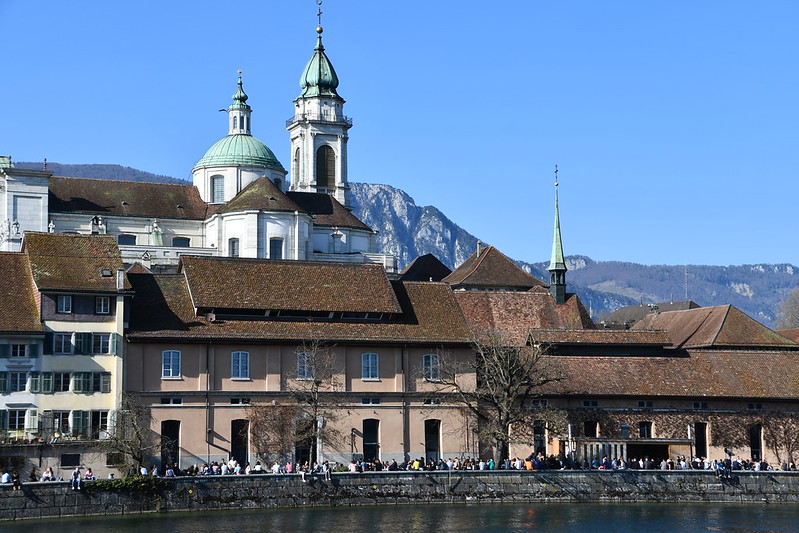 I leave you with a view over the town of Solothurn. The building along the river used to be a slaughter house, but is no longer used and is now a restaurant, hence the many people sitting outside. Behind you can see our cathedral of St. Urs (our patron saint) and the spire of the Jesuit church. As a background you see the Jura mountains.  Yes I know my town.

Have a good Sunday everyone, sleep well, and make the most of it. I will see you later. 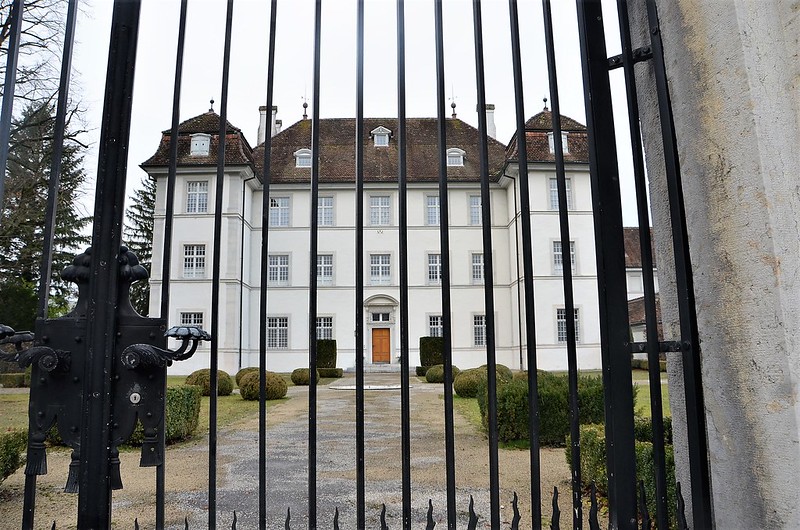 Living in the roman catholic part of Switzerland n Solothurn we have a road with various official buildings. The bishop of Basel has his seat here, and otherwise there is the college for training catholic priests. This you can see behind the gate on the photo. I wheel past in my chair every time I go into town, but the gates are never open, so I only have photos with the vertical bars.