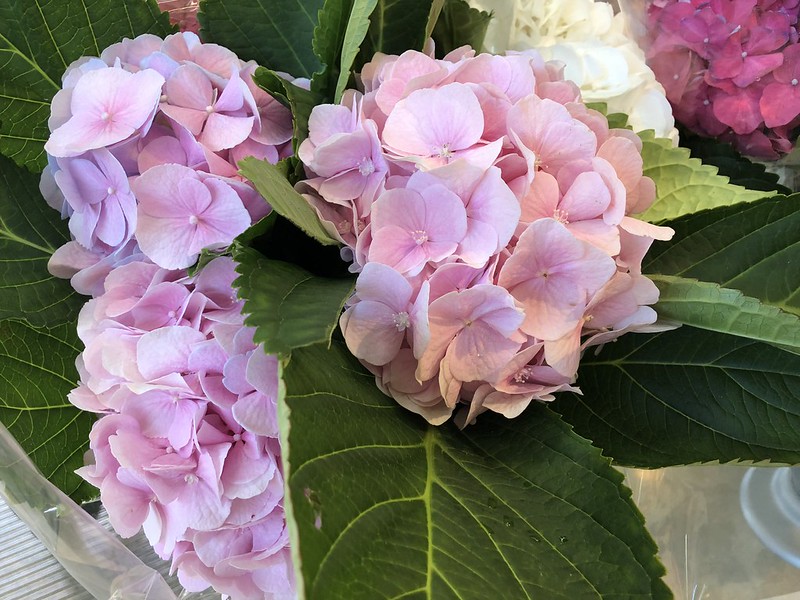 This hydrangea seemed to be having a problem with the leaves. 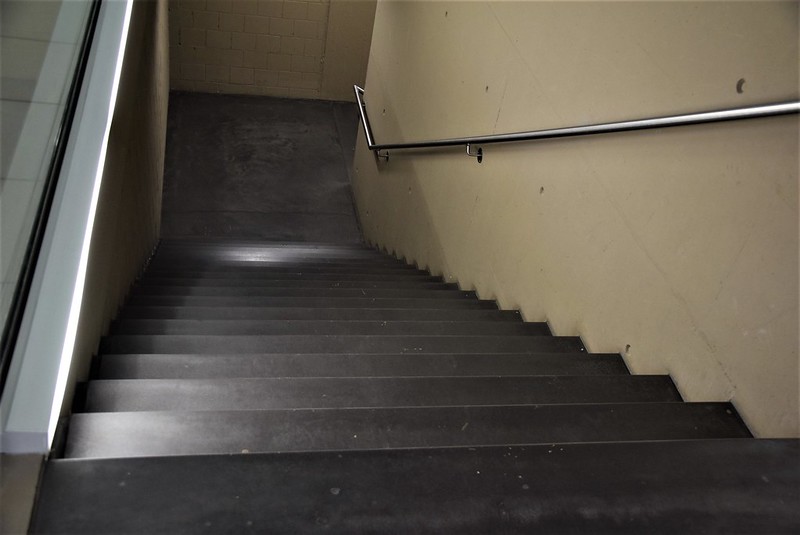 There are places where I hesitate
I could stumble and might fall
Of course I could try the descent
And hold onto the wall
My mind is working overtime
Perhaps there is a lift
Or even an escalator
would help my weight to shift
The golden oldie problems
have become a further stage
The years go past, hesitation
is now a part of age

This afternoon it was again a journey to the Swiss Supermarket in the Mall. For some time they have had various tables available for the kids to draw and paint. Lately I heard some quite jazzy music playing in the area so took a closer look. Two employees of the supermarket (right and left at the front) were dancing in time to the music and they were quite good with their co-ordination. There were two kids standing in front and copying their actions. I am not sure if they had a flair, but I found it a good idea to keep the kids busy whilst the parents are concentrating on the shopping.

I decided to take a photo and the young lady on the left at the front seemed to be in charge and asked if I would like to participate with the dancing. Actually, if it had been 10-15 years earlier, I would have joined in – why not. Dancing with a stick in your hand and belonging to the ministry of funny walks is not so ideal today, so I politely said no and told the young lady she was a few years too late with her invitation.

My only flairs today are managing to survive the day without having an accident on the way. They call it survival I believe.

A few wispy clouds which have already disappeared since I took the photo about half an hour ago. It is again promising to be a continuation of our heat wave summer. Our government authorities are giving out warnings constantly, grade 3 or 4 etc. In the earlier days you just had to bear with it and hope for a cooling wind, even a storm. Today it is organised. The weather has to succumb to our organisation. The Brits even do it with colours I noticed. You get a green, yellow or red warning. Whatever the danger is at least you have a colour or a number to tell you about it. I am sure it is only to fit with a computer programme. There is nothing today that happens without it appearing somewhere online. Feelings are now inferior, the computer tells you what you are getting and the dangers. It never even used to be dangerous, just something to put up with. Perhaps I am old fashioned and not going with the times, being a golden oldie.

One thing I do know that I stay at home and go nowhere voluntarily in this heat.

Although yesterday afternoon I had to bring Mr. Swiss to the doc for a routine check. As it is not so far, just in the next town, I drop him off and drive home. He calls me when he is finished. It is in the more modern part of town and the streets and even roads were empty with just one of two people. The heat is getting to everyone at the moment.

Yesterday I was surrounded by noise from outside. Our wild meadow was mowed down and now everything is laying flat on the ground. Gone is the variety of various wild flowers. Their seeds have formed, settled in the ground for the next year and the remains will be dried in the sun today and afterwards gathered for the animal hay supply during the winter.

I discovered this wild one growing in my garden this morning on my inspection tour, so I had a look in my plant identification app, although I must admit it does not always identify the plant as it should. However, it told me it was a wild jasmine which did not impress me so much.

I notice that the insects also search for refuge from the heat now and again in my apartment. Yesteday a spider was taking a stroll around the bedroom floor, not such a big one, but big enough to be seen and it had quite a fleshy body and legs. Mr. Swiss says let them live, so I did. Five minutes later I went to see what it was doing, and it was squashed flat on the floor. So much for letting them live, Mr. Swiss did not see it and trod on it, just collateral damage I suppose. The flies have also returned to wherever they go in Winter. I imagine a space ship carrying them off to their world during the Winter and returning them for their long summer break to the earth.

And now to continue with the daily tasks. Even golden oldies have their duties. Look after yourselves and stay well. See you around later.