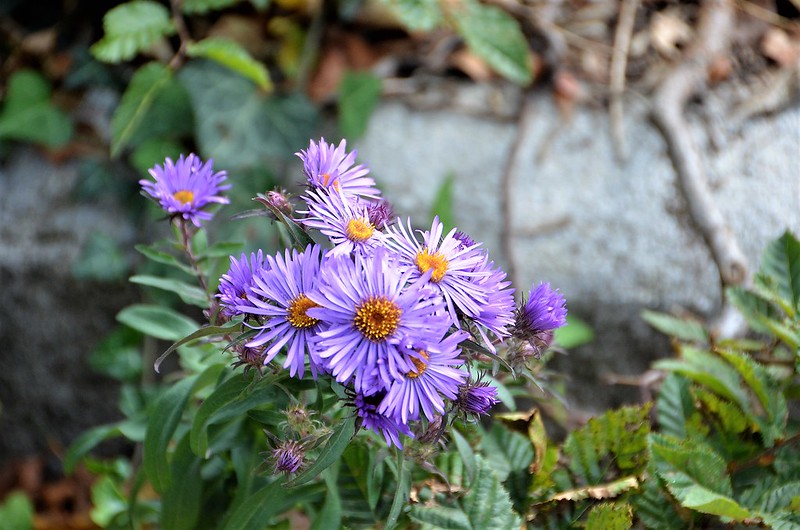 Not something for the summer days, but a reminder that even in Autumn we have flowers.

Here it is, my Swiss nectarine tart. Nothing special. I baked it this morning just after breakfast. Usually we make them with apples or apricots, any fruit really, but not so much nectarines and now I know why. Nectarines have a large stone in the middle something like a peach and the flesh of the fruit does not like to leave the stone on its own, so I had to carve it away. It was also quite juicy dripping everywhere, but I did it.

Gratis? I had to buy the nectarines and the pastry, but otherwise the work was a labour of love. Mr. Swiss enjoyed it, my son enjoyed it and even I enjoyed it. The enjoyment is gratis. 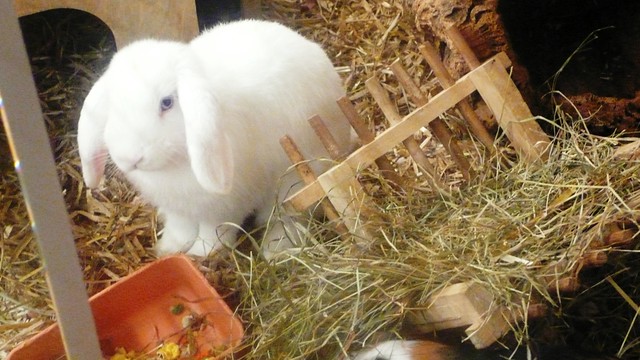 We have wild rabbits where I live, but because they are wild you very rarely see them. I think they spend most of the time underground. The rabbit in the photo was in the local animal store, but I decided that was the best place for him.

I once had a rabbit, but that got a little complicated. My kids wanted a rabbit and someone I knew had a dwarf rabbit and passed it on to me. My kids were delighted, and  we had a cage for it. I felt sorry for this little rabbit all alone in its cage so I decided to let it out for a walk in the apartment. This was a mistake. The rabbit was happy, it was hopping all over the place.

Do you realise what a rabbit has for a recycling system: little round balls, something like ball bearings, and because they are small they appear like the product of a machine gun. I was finding them everywhere. Admittedly they were hard, not soft and messy (unless you happened to tread on one by mistake), but they were everywhere. Its recycling production was something for the Guiness Book of Records. And of course the kids were not interested in following Brer Rabbit to sweep them togetether. Who said miniature rabbit, there was nothing small about its digestive system.

And then I got lucky. I was attending an evening course for sewing and I got into a conversation about pets. One of the ladies said she would love a pet rabbit. A week later my wonderful reproductive recycling rabbit machine was on its way to a new owner and our carpet was no longer covered with little brown pellets.

So warning! Think twice before you decided to have a sweet little bunny rabbit as a pet. They do not have trays like cats and you cannot go for walkies with them like dogs. They just drop it everywhere, about 1-200 little balls daily. At least that is what it seemed to me.

We have 11 fountains in our town of Solothurn in Switzerland (in Solothurn there is 11 of eveything, the town number), all mainly in the same colourful style and they are kept in order with renewing the colours. I was on a wheelie in my chair yesterday through town and took a photo of the St. George fountain, the guy that killed the dragon, from a different angle. He kept his foot on the dragon to make sure it did not escape.

No, this is not a photo of this morning’s clouds. This morning it is grey, but no clouds, just dismal. This is from yesterday afternoon where a storm was on its way, although the afternoon stayed dry. During the afternoon I got a report on my phone that the storm had now reached Bern with large hailstones and torrential rainfalls, although they always tend to overdo it a little. However, Bern is just over 40 kilometers from where we live, and so anything could be.

It arrived in the evening in our area: first with high winds and so I was out in the garden supporting my tall plants (especially the hollyhocks) with metal tomato poles. Something I had intended to do for some time. I also put the chairs on the porch out of harms way and a few potted plants and I was ready.  We got no hailstones, a few claps of thunder and lightening, but no big deal. However the winds were very strong, but my garden survived very well. Probably the soaking of the rain did it good.

Luckily I managed to get away in the afternoon for a wheelie into town. I was on a photo quest for a few of those shops that were closing due to almost no profits with online shopping.

This used to be a thriving toy shop and I remember my visits around Christmas for the kids toys when they were younger. The shop had been in the hands of a family for years. It was then taken over by another shopholder family, still selling toys, but also prams and other baby requirements. At the time of carnival they also sold the costumes and always had a figure dressed in a carnival costume outside. This has now been closed down and I have no idea what will happen.

The shop encased in a wooden cover was one of the town’s oldest chemists shops and drug store (by coincidence with our family name, but no relation). It was a household name here. This closed about a year ago as the owners of the building doubled the rents and is now being redesigned for something new.

And this was a thriving clothes deparment store, belonging to a chain throughout Switzerland. The owner closed them all and this branch was taken over by an Italian clothing store chain. Only for a few months as they realised that there were no profits to be made. It is now empty and closed since almost a year and will also be something else eventually.

It is sad to see stores belonging to families in the third generation already, being closed. I said to Mr. Swiss yesterday that in 10 years we will no longer recognise our market town of Solothurn (if we are still here with my than 83 years and Mr.Swiss 90 years).

And so I wheeled on in my chair and discovered yet a new street musician. I wheeled past him when he was getting prepared for his entertainment fixing the bells on his ankles.

He then produced his instrument, I think it is a sort of shalmei, and began to play stamping his feet with the bells in the rhythm. He gathered a few spectators and even collected money in his hat on the side. The music was OK, but a bit nerve killing with time.

I decided to wheel on home along the river bank after taking a shot of the river in town with our landhouse on the right and including our restaurant mile in the background in front of our Wengi bridge.

I wheeled on home alonge the path next to the river bank which was now looking quite lush with the rain we have had lately. I had a meal to cook for the evening (chilli) and my photos to upload, as well as writing a couple of blogs. Mr. Swiss was off to bed around ten and it was me and my computer uploading and describing photos and emptying the dishwasher, as well as hanging up the washing. Anyhow it all keeps me out of mishief.

I have had my breakfast, written my piece of the morning and also baked up a platted bread, so what could possibly go wrong. I now want to bake a nectarine tart and deal with the usual household chores. A woman’s work is never done, but you never get bored.

My botanist colleague, Tony in sunny California,  told me that this plant is also known as a gaura lindheimer of which I have group growing in the garden. They are mainly pinkish red, but this morning I discovered I have a white one. I leave you with its photo and wish everyone a very good day.