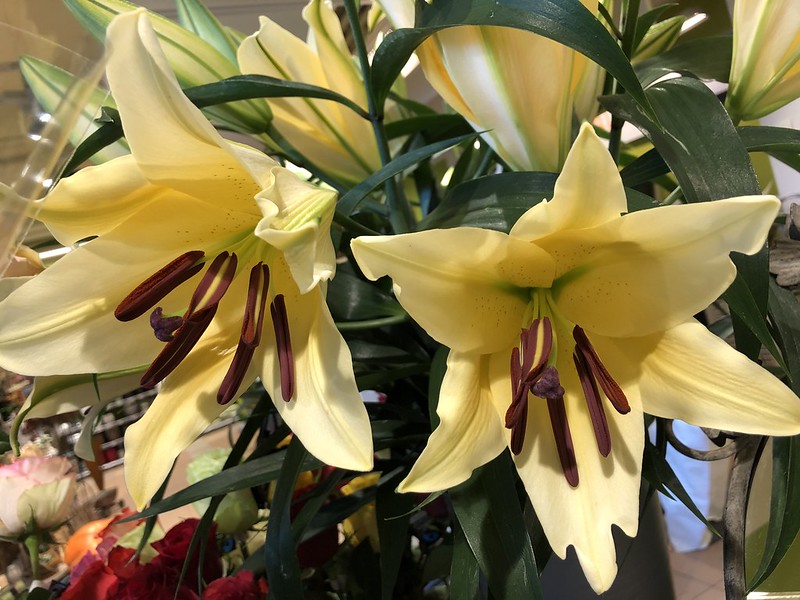 A lily never fails to surprise when it opens the petals.

I was going for a wheelie in my chair, as usual with my camera and then I saw this crow. It was only when I uploaded the photos that I realised what it was doing.

It was a hard job. Those nuts have such hard cases.

But after a long delay, he finally worked out how to do it and was left with the empty shell.

I don’t know how he did it, but the proof is that there is no nut to be seen because he must have eaten it and that crows are very clever.

I have many roses in my garden. Some are temporary, bought in the store in a pot and afterwards planted in the garden and others are permanent, but this is my climbing rose. I do not know what possessed me to get this rose about 15 years ago. I did not really have the room for it and I also did not know that they are competitors for Jack’s beanstalk. However, it has been in this corner since it arrive and I usually try to support it next to the hedge.

Unfortunately the hedge must be trimmed now and again. The gardener arrives, trims the hedge and my climbing rose afterwards collapses. I watched the trails of rose stalks laying on the ground due to their weight and yesterday decided the time was ready to do something about it.

However, I underestimated the attack of the thorns on the stalk(s). They were big and pointed and were determined to leave many scratches and scars on my fingers, hands and even arms. They were not even thorns, but some sort of weapon determined to mutilate my body. The first precaution was to put on my garden gloves. These are thick, with leather similar fingers, so what could possibly happen. A lot happens when you are trying to weave the long grown stems around the supporting poles with gloves on. You just do not get the right feeling. The poles were resisting and so was my climbing rose. With the help of a few profanities uttered and doing my best not to break the stems I succeeded more or less. The ground was covered with rose petals, but I managed to remove most of them.

There must be a clever saying about this, but I have not found it. Perhaps “never trust a rose, they are out to get you”.

Looks like a good start to the day. I would have been here half an hour earlier, but my neighbour was also outside in the garden and a conversation developed. Even in our little corner there is always something interesting happening. It seems that the finance manager of our local government has lost his job with one of his assistants. I was in the local newspaper. I only read the obituaries, so did not see the news. No reason has been given, so we are all wondering what happened. My neighbour and her husband are also golden oldies, so we seem to have the same problems: doctors, health and mobility are the main themes and, of course, new arrivals on the estate, or in the village. Oh, what a small world we live in.

I went for a sort wheelie in my chair yesterday afternoon: the weather was good and I was getting a little cabin fever. It was a catholic holiday in our Kanton for corpus christi so I was not surprised to see that our town was again only populated by people sitting in boulevard cafés and even some of those were closed. The entrance to the town is through  an arch, the Basel gate, and the first thing you see is the side of the massive building of our St. Urs Cathedral on the left. Further down is the Jesuit church also on the left. For such a small town, Solothurn, we have enough churches.

I had a quick wheelie on the periphery of the town and noticed that there was no action to be seen. I decided to wheel on home, along the river. We have a brooding swan with five eggs in the nest and I was curious to see if anything new had developed. She was still sitting on them waiting for the big hatching moment, so nothing new. I read somewhere that it takes about 45 days for the eggs to reveal their contents. I am looking forward to perhaps capturing some photos of the cygnets.

Even the ducks seem to be having a relaxing day, sitting on a stone watching the river flow past.

And then I saw some action at the side of the river. I decided to attempt a photo, although it really had to be quick, but managed to get a shot of a dragon fly (or something similar) as it hovered over the water. the quality of the insect is not so good and I have more details of the river and its contents. It is a wonderful time of the year.

Although I heard some rumbles in the distance from behind the Jura and the sky was darkening. I hoped that the storm did not break before I arrived home. However, the storm stayed where it was and the rain remained absent.

It was a pleasant evening and I was busy uploading my photos. In summer I always sit outside as long as it is light enough, until about 9.30 pm. Mr. Swiss would usually watch the TV, but even this has become a thing of the past. There are now some evenings when we do not even bother to switch it on.

Today is yet again day of the week-end shopping and the list is made. No. 1 son has decided to go to Zürich for the day tomorrow, so it will be just a golden oldie pair at home. I try to organise interesting meals, but also do my best to cut down the work spent on cooking.

And now to make up for lost talking time with the neighbour and get some daily work dealt with. Have a good Friday and hope you all have a good week-end. I leave you with a photo of a so-called evening primrose. They are flowering everywhere at the moment. I suppose they are a wild flower, but I like them very much. As soon as they have seeds I will collect a few to plant them in my garden.