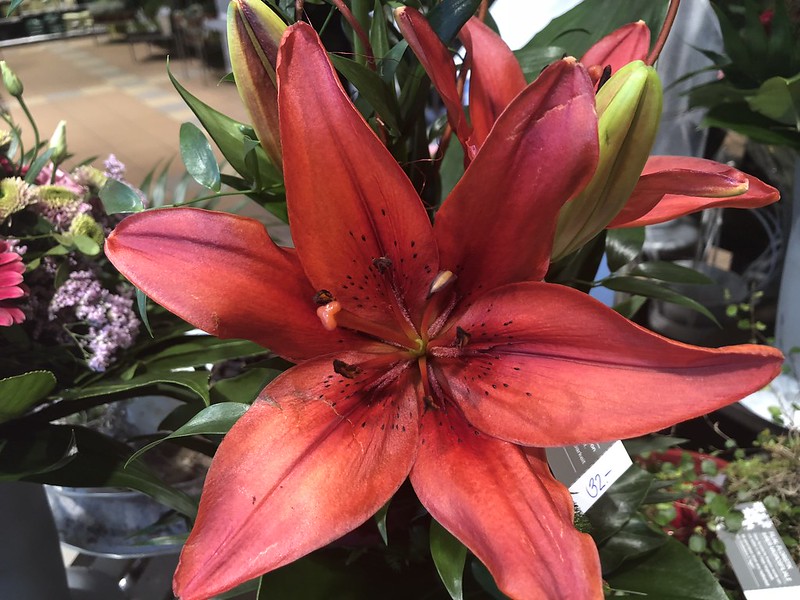 A red lily, not a colour I often see for this type of flower. 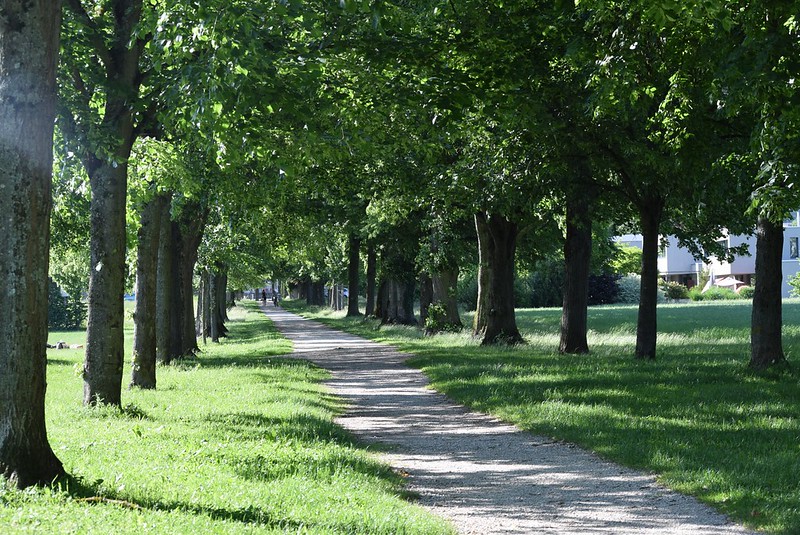 A path into town from the river 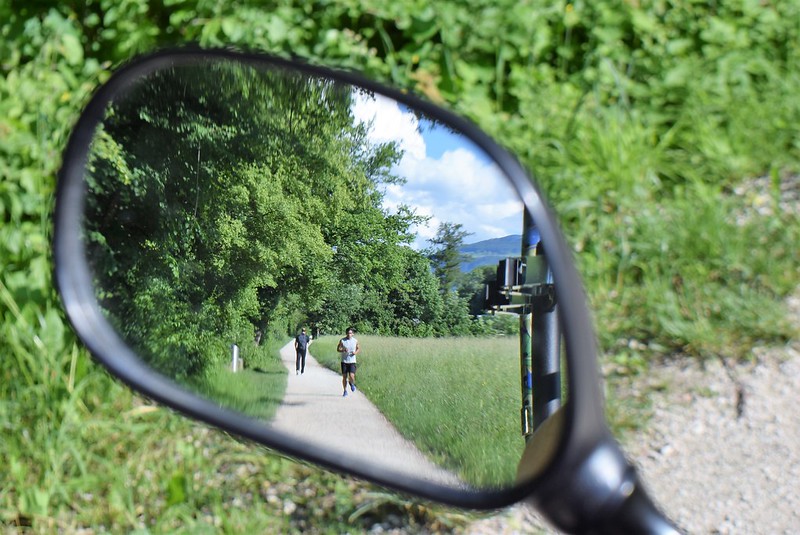 A look in the rear window of my wheelchair as I was speeding along. 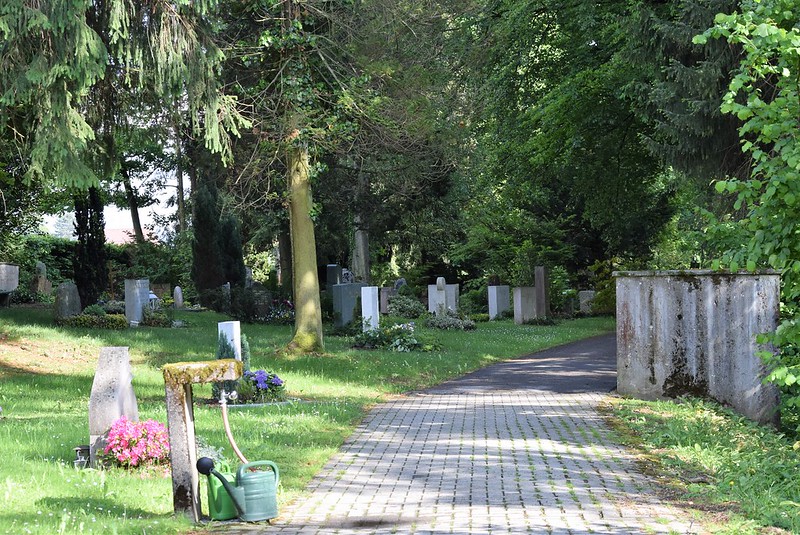 Driving along in my wheelchair in the local cemetery 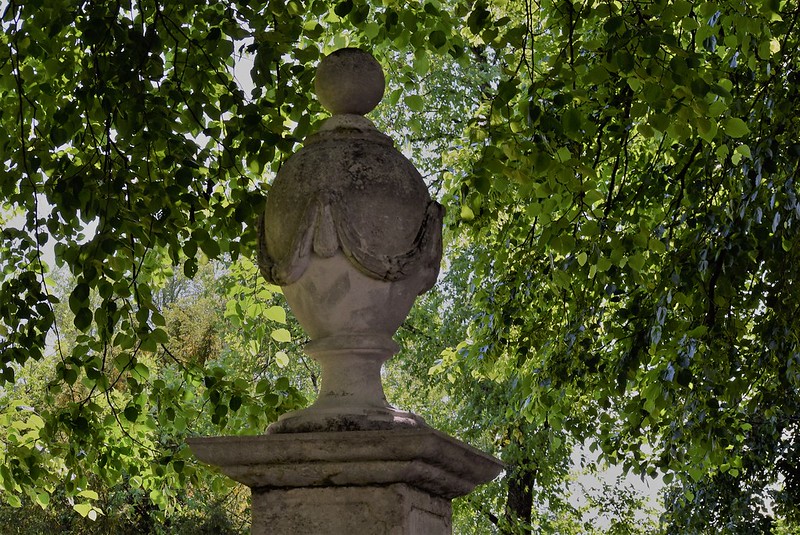 I was surprised at the daily prompt word today, although I should make the most of it, because they are killing the daily prompt. It will be pushed into a dark corner of a cyber world and  believe me you do not want to go there.

The only archaic stuff that exists today is on the cemeteries of this world. A lonely pillar with a crumbling relict, perhaps a figure gathering moss and going green at the edges. I had an update last week on my Windows computer and now I have a new button at the bottom with “Taskansicht”. My computer speaks only german, but it means something like Task view I suppose. I do not need this and will not use it I like things to remain as they are where everything works.

Back to the WordPress misery. From 31st May things will not work that I like. There will be no daily prompt although the daily post will remain. A lot of things will go, because according to WordPress they are now not necessary. We must move on, although this is more stagnation for me then moving on.

It must be something to do with the money. In my archaic brain anything that turns your world upside down is for financial reasons. The daily prompt with its random words, picked by random by their automatic hardware or whatever, is costing too much. So throw it out, much easier, and already money saved. And then we have the weekly photo challenge. Who needs that, once a week many followers of WordPress proudly show their photo to suit the theme, we are wasting time.

Of course we can now make entries in Longreads (if you want to spend a few hours on your computer writing something) and perhaps you might be one of the lucky ones that gets an entry posted in “Discover” (which I am not). Basically I think we are here to speak to each other, to post daily and have fun and meet online. Fun is not a word that exists in the financial vocabulary of WordPress so forget it.

We have become archaic, our contributions are not longer needed. I have not seen the reason why. WordPress did say “The decision no longer to publish on The Daily Post wasn’t an easy one” so why do it. I have not read one single remark from anyone that finds this a good idea. But who are we to say anything. Those of us that pay their $100 annually are the fools. Even roses die. 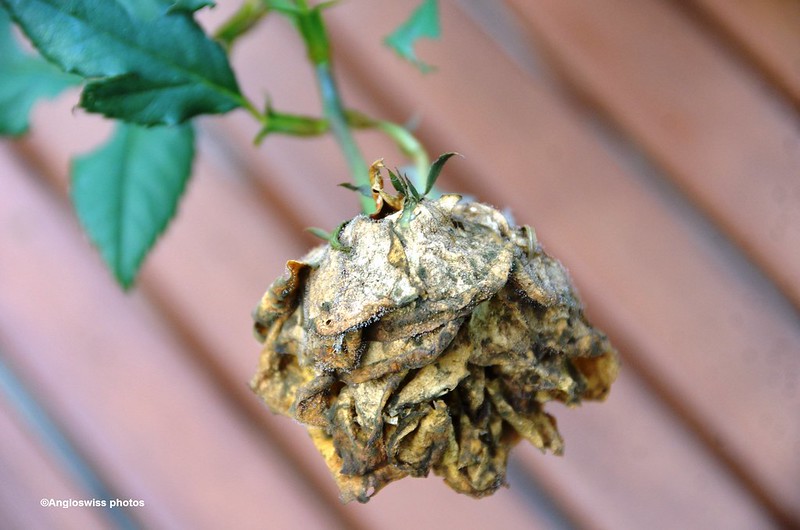 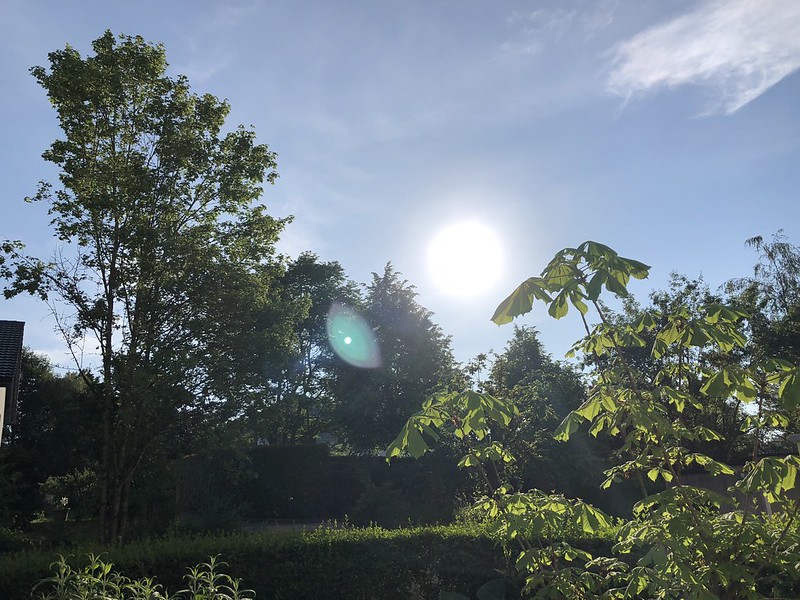 This morning I was still sort of hugging the bed and it was time to rise and shine. Mr. Swiss exposed the windows by opening the blinds and I thought he switched the lights on. The bedroom was flooded by sunshine. I decided to take a photo in memory of the morning. The big ball in the sky is the sun. Luckile I could look at the screen on my phone camera, otherwise I would have been blinded. It looks like a good day today weatherwise. 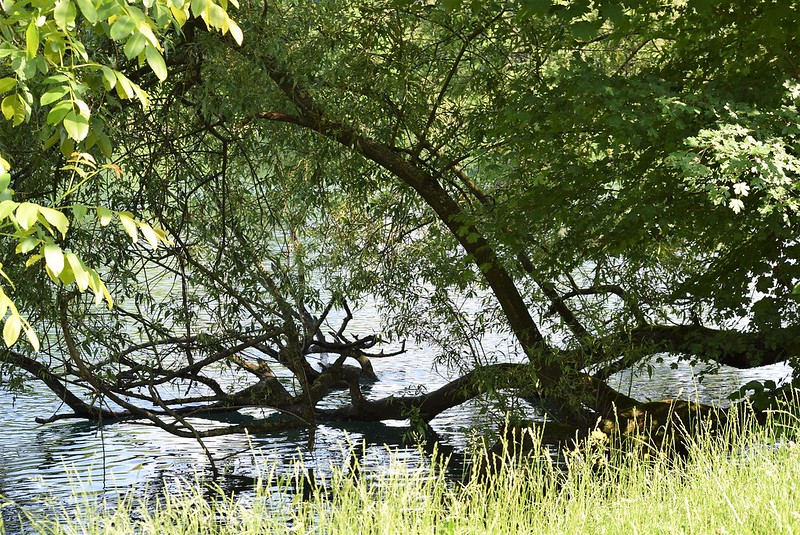 The weather showed promise yesterday afternoon with sunny skies. I had a problem with an electric toothbrush after lunch as my Philips sonic seemed to have given up. I did a complete cleaning session on the brush and it seems that it can get blocked by toothpast remainders on the connections. Eventually it was working again, meaning that I was half an hour later for my lunchtime sleep and awoke half an hour later. No problem, golden oldies do not have to do anything. I was thinking of a wheelie in my chair but postponed it and wrote my daily blogs. It was still only 4.30 in the afternoon, and Mr. Swiss said I still had 90 minutes until tea time, so I decided to take a ride along the river. 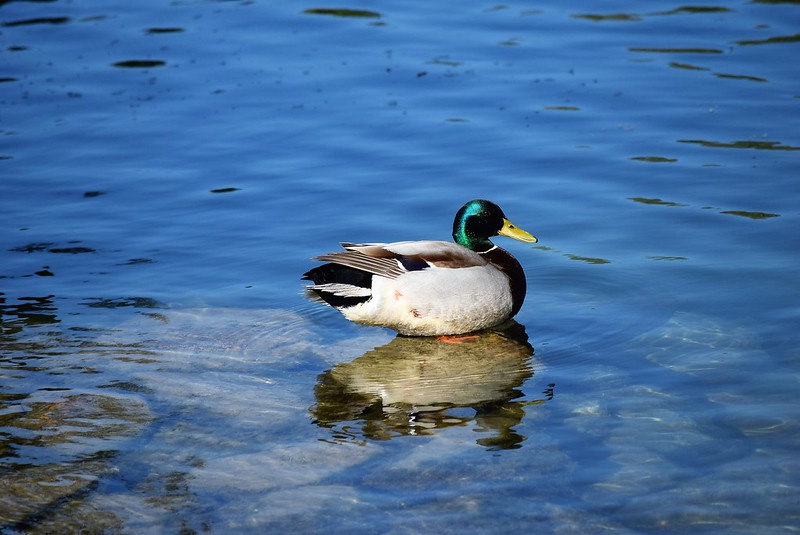 This mallard duck seemed to be waiting for a photo. It was sitting on a stone in the shallows of the edge of the river, still and not moving. I though it was one of those wooden imitation ducks, but noticed it had real feathers. It was probably just have a bath in the sun or recovering from a long swim. As it was the male of the species, perhaps he decided to escape from the hungry babies in the nest and left the wife to the work. It was still sitting there when I wheeled on. 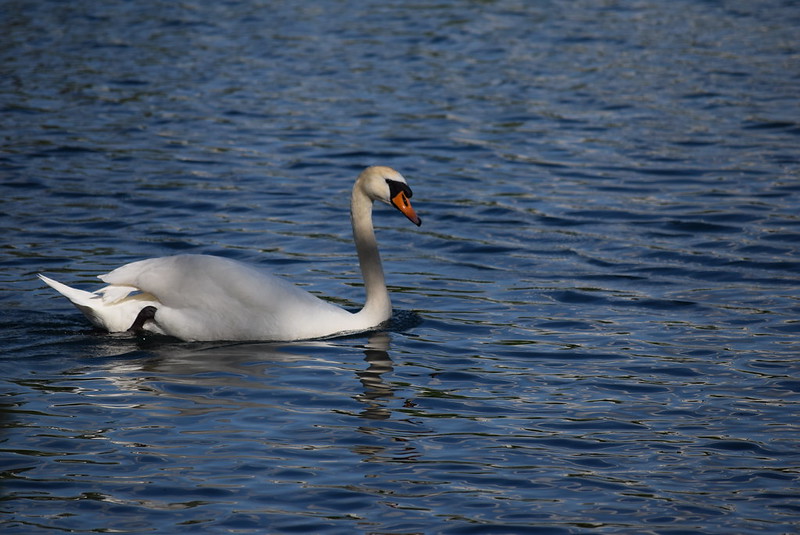 I also managed to get my usual swan photo. There are always a few swimming around on the River Aare. They mostly remain on the opposite bank, but now and again I get lucky and one swims past. 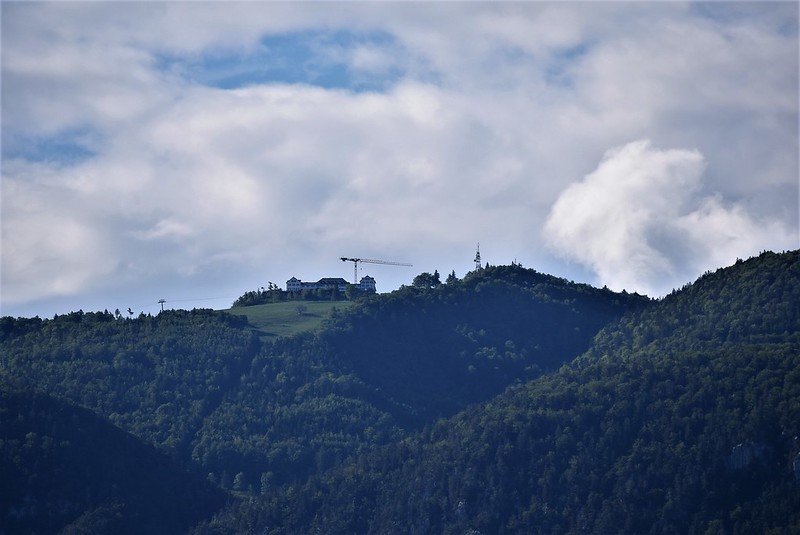 I also managed a photo of our house mountain, the Weissenstein with the restaurant on the top. At the moment they are building some additions, hence the crane. Apparently it was quite an operation to get the various parts of the crane to the top of the 1200 meter high mountain and piece it together, but the Swiss can do anything, especially if it has something to do with high places.

I wheeled my way almost into town, looked at my time on the telephone (who needs a watch?) and decided it was time to make a turn and wheel back home.

I was now a happy wheeler, as I had been out, seen places and things and taken a few photos. During the week there are not so many travelers along the river. As the offices closed for the day the joggers arrived in their Nike and Addidas etc. running shoes. I have now noticed that I am getting a wheelchair sun tan slowly and my arms are getting a good colour. Sometimes I can even feel the sun burning on the back of my neck. I am becoming the John Wayne of the wheelies.

I spent the evening catching up on a couple of blogs on the computer and uploading photos. Afterwards there was a shopping list to prepare. Today I am lunching outwards. Our village organise a monthly lunch for the golden oldies so I have to get a move on as I have a shopping trip to complete.  Mr. Swiss has been a couple of times when I was still working. Today it is in the local castle and we decided to go, so I have no time to spare with the vacuum cleaner tour.  I am sure it will be a real rip roaring event with the senior citizens.

Will tell you all about it when and if I return. See you later, enjoy the day. I will leave you with one of my cloud impressions from yesterday’s walk. 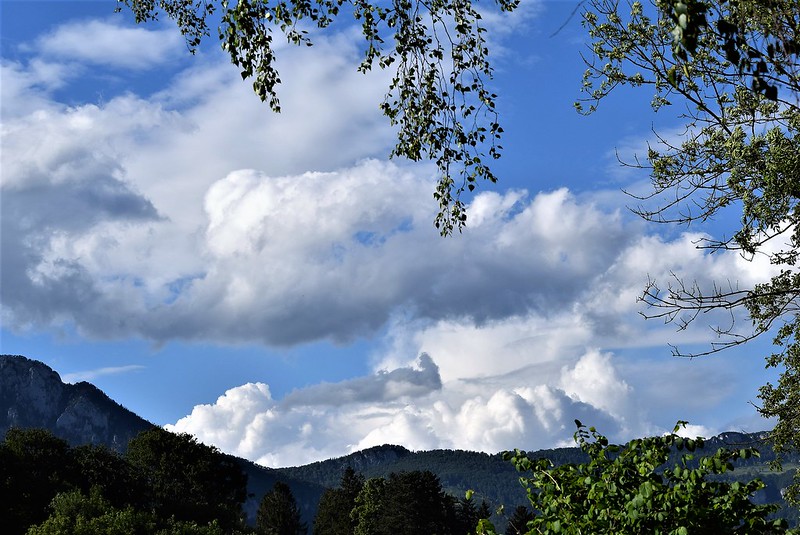