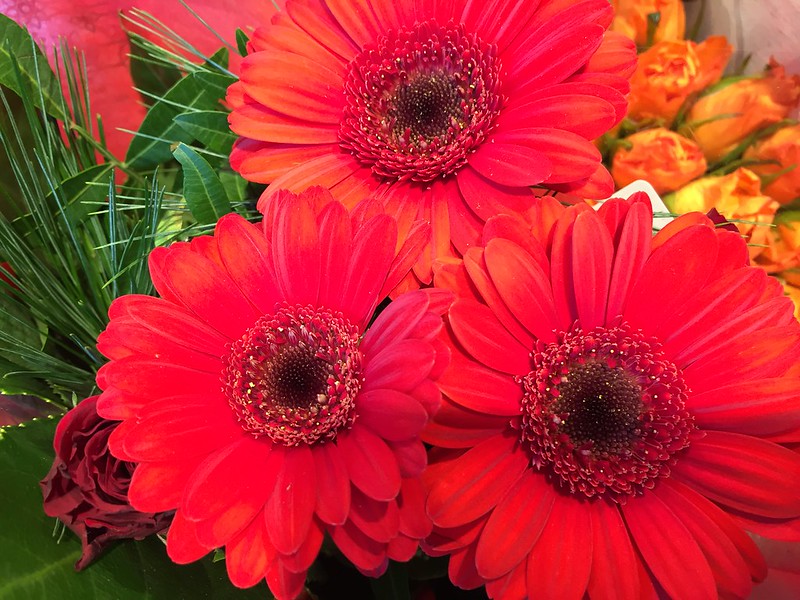 Here it is, Gerbera in red 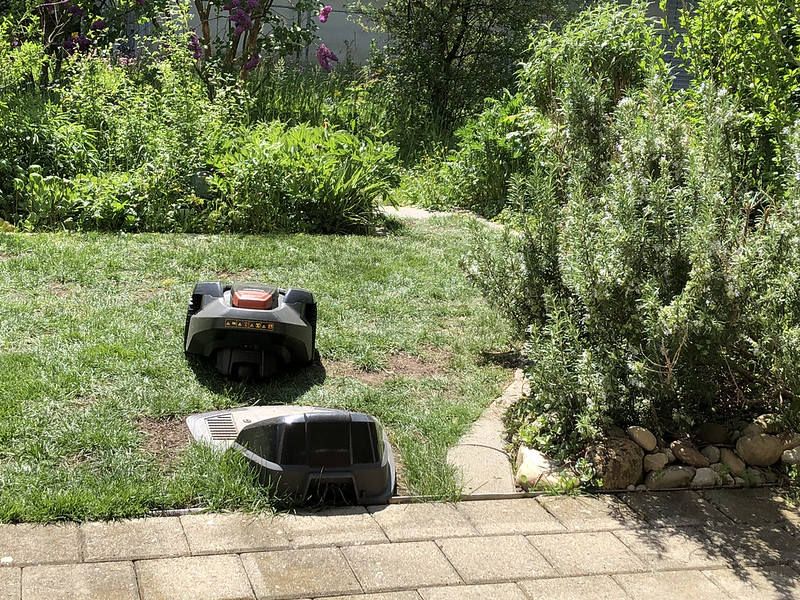 And brave little Mowy is entering the docking station after flaunting his talents on our lawn. Look at the lawn. It is now a lawn with grass. Last year at this time the builders crushed the grass stalks with their heavy boots. They scattered screws and nails onto the surface and pounded iron supports onto the grass, but nature has won, with the help of Mowy of course. Mowy was released from his Winter refinements in the cellar a month ago, and after a few problems, caused by ignorant human owners with switches and computer programmes, Mowy returned to his normal daily rhythm cutting the grass for half an hour from 2.30-3.00 p.m. He had his own system of weaving his way, we must not forget he is a robot and does not heed to human rules and regulations. He mows where he wants to mow.

And the grass cuttings? No problem says Mowy, if he could talk. The shredded grass falls back onto the ground and supplies fertiliser for the lawn. Mowy does not waste time or snippings, he knows what to do. 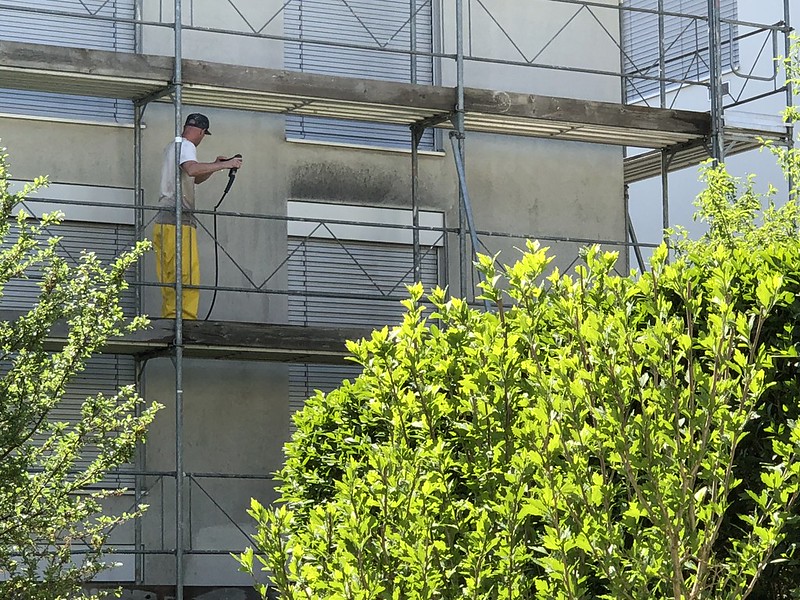 At the same time, a builder is flaunting his talents with a high pressure cleaning apparatus, spraying water on the surface of the building opposite. He is also cleaning their blinds at the same time. This building was completed 2 years after we moved in and now it is being renovated, but gently. They will not have the insulation ripped away and replaced as we suffered, but just the walls cleaned of dust and dirt. The weather is ideal for this work, warm friendly sun and a light breeze. You see the black stains on the wall to the right of the builder. An hour later, they are no longer there, washed away by a jet of water.

First of all Mowy purring his way across the lawn and the crescendo of the water pressure on the walls by a builder. Afterwards peace will reign again 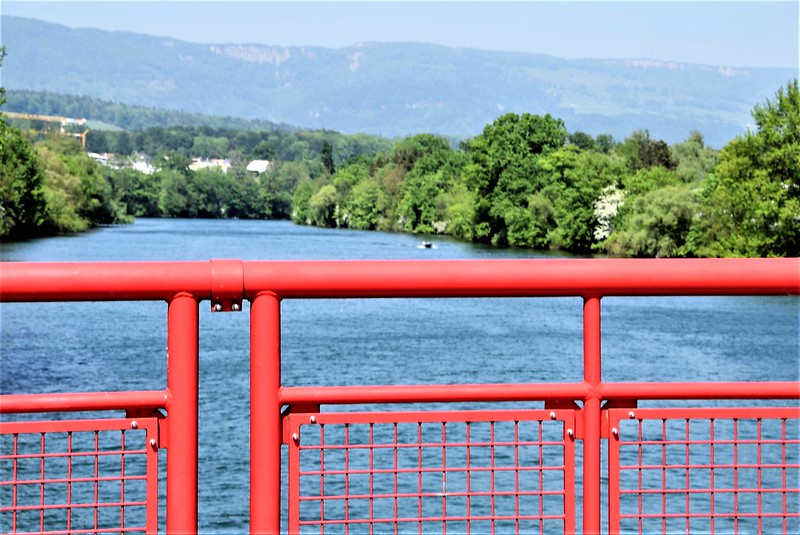 Yesterday I crossed the river (in wheelchair) to get to the other side, and for no other reason, although I was thinking of new material for the camera. It was another warm day and I noticed that even in a wheelchair you can pick up a summer tan on the arms. I wheeled along the river bank and reached our first bridge towards the town. I remember the bridge being  built and it connects the high schools to the various villages on the other side of the river, mainly for the students. If you look at the photo, you see the white buildings straight ahead which is where I live in the village of Feldbrunnen. The mountains are the Jura which stretch from East Switzerland down to Geneva in the West. We are somewhere in the middle towards North. 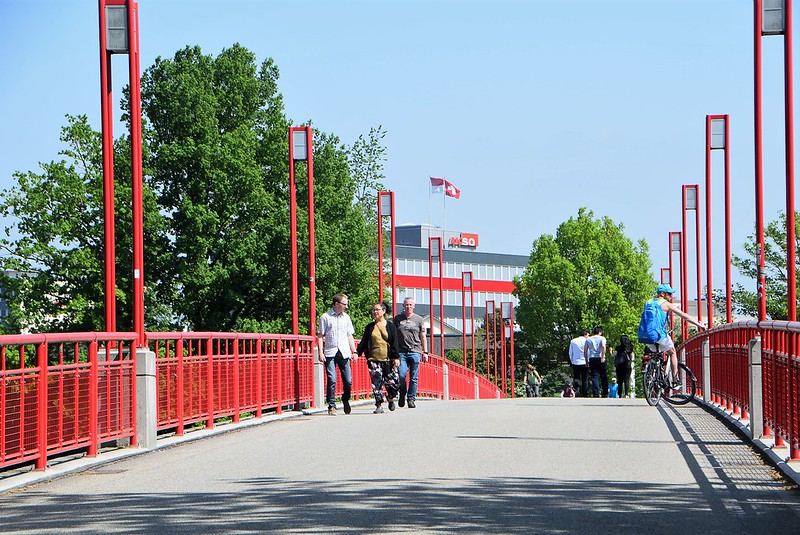 This week-end were bike days in Solothurn. It happens once a year and someone had the great idea a few years ago. Mr. Swiss was slightly annoyed when he returned from the Saturday shopping expedition, as there were bikers everywhere occupying too much space. If you can ride a bike I am sure it must be fun, but I cannot, have never been able to, and Mrs. Swiss finds biking on the roads has become dangerous for golden oldies.

When I took my wheelie yesterday, there were still remains of bikers pedalling their way along the river, through the woods and generally causing obstructions. Some even had bikes which resembled a mini car, with metal covers. The ones where you almost lay parallel to the road. The groups were the worst. They always had a boss that organised everyone, but to their own ideas. Normal pedestrians were in the way. 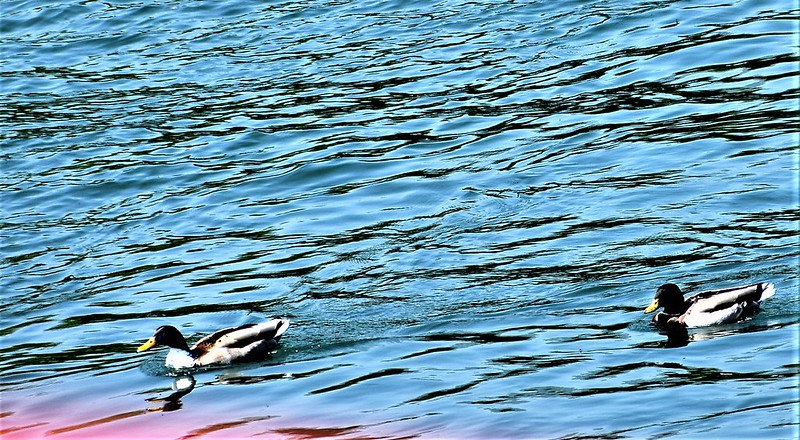 I decided to pay more attention to duck life on the river, although even these had become scarce – too many bikes probably.

I decided to return home, but did enjoy getting into the fresh air again with the wind in my hair (on the bridge) and the sun, I spent the next hour uploading photos and blogging around. I made myself a sandwich which I ate on the porch and realised life has its good side. Now is the time for the pleasant evenings when you have nothing more to do and can sit outside as long as there is enough light and read a book on the porch. At the moment 9.00 in the evening is the time where it gets to dark, but as the summer progresses daylight will last until 9.45 pm.

Today is again a working day, at least for those that work. Of course I work, but housework was never really judged as an occupation: just a pasttime for a purpose in the life of a housewife.  My housework is now therapy, as I can do it again. This morning I will again be on my travels, but in the supermarket. This afternoon is again physio therapy at home for half an hour, although it seems that everyone is happy with my progress and running out of experimental ideas of what to do with my body action.

Make the most of the beginning of the week, see you around. I will leave you with a photo of a pigeon cleaning its claws on the local bridge. 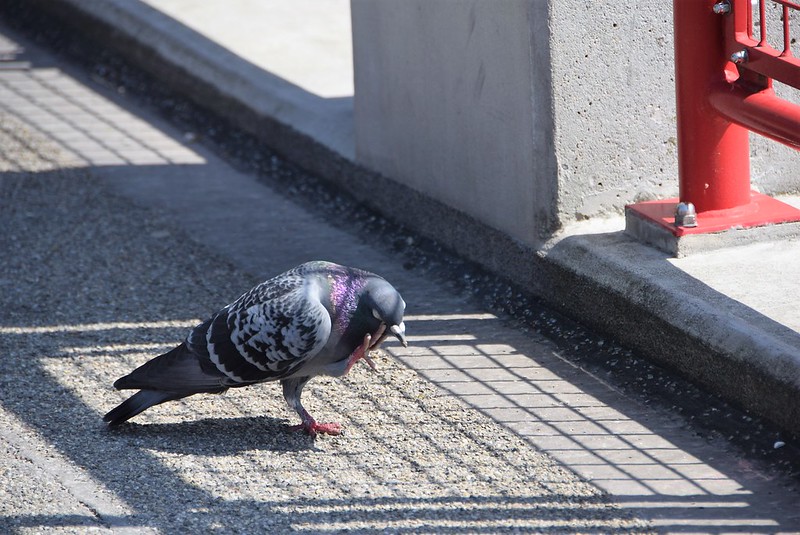