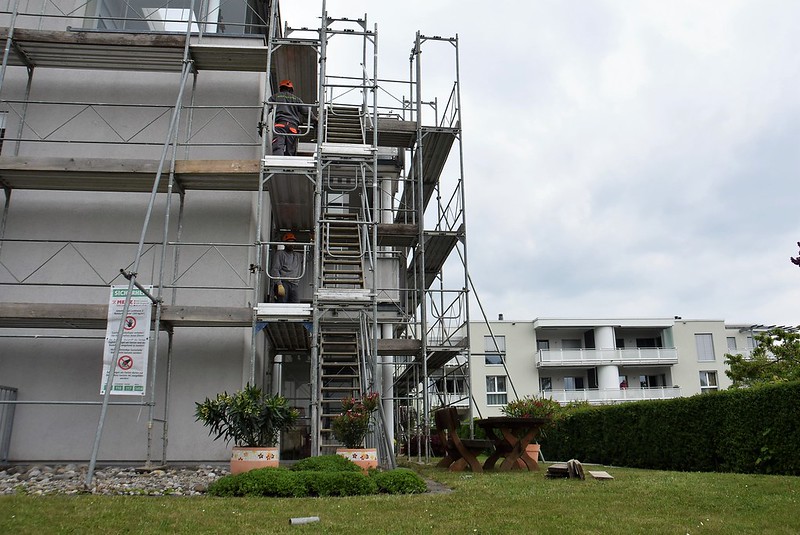 Yes, they are building again, but this time further along the road, thank goodness 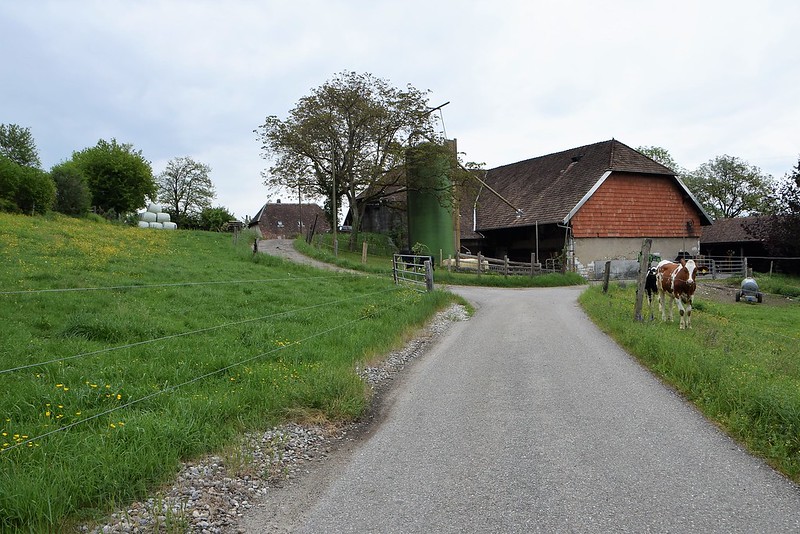 Paths in my village, always have a cow somewhere in Summer 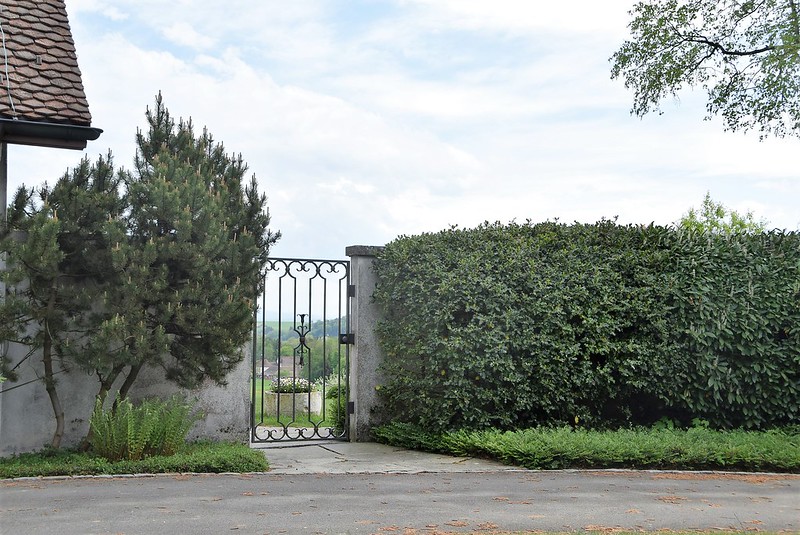 A peep through the garden gate 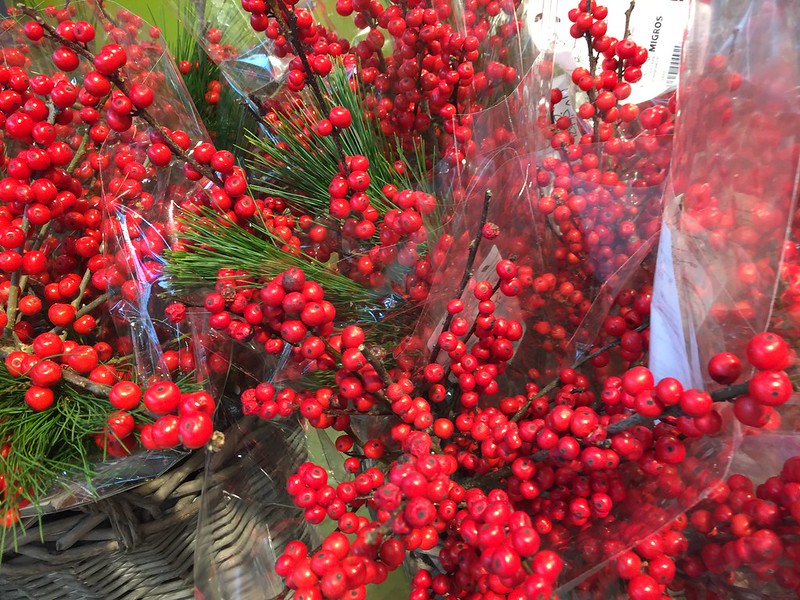 I have no idea what sort of berries, but they are very bright berries. 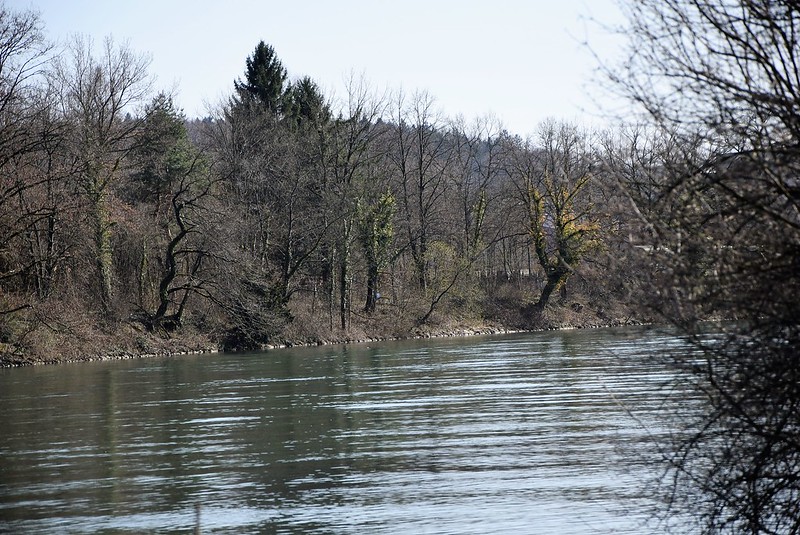 The tide is in on our local river: sometimes the water is high usually when the snow starts to melt in the high regions, otherwise is remains. We do not have a tidal river, we do not have a sea in Switzerland, just rivers and lakes.

At the moment the tide is lapping at the edges in my apartment. Since breaking a leg in January, I have been overcoming milestones to return to my normal state of action. Of course, things will never be as they were, my MS also plays a part in that, but I try to do it again even though I feel a bit wobbly. OK, I need a stick for support and grip on any piece of furniture that can support me, but there was the last bastion to be surmounted, the windows on the West side.  Last week I cleaned all the bedroom windows on the East side which was no big deal. Of course it was difficult holding on and keeping my balance, but I did it. Now there was the last bridge to cross, the big windows in the living room and the kitchen. 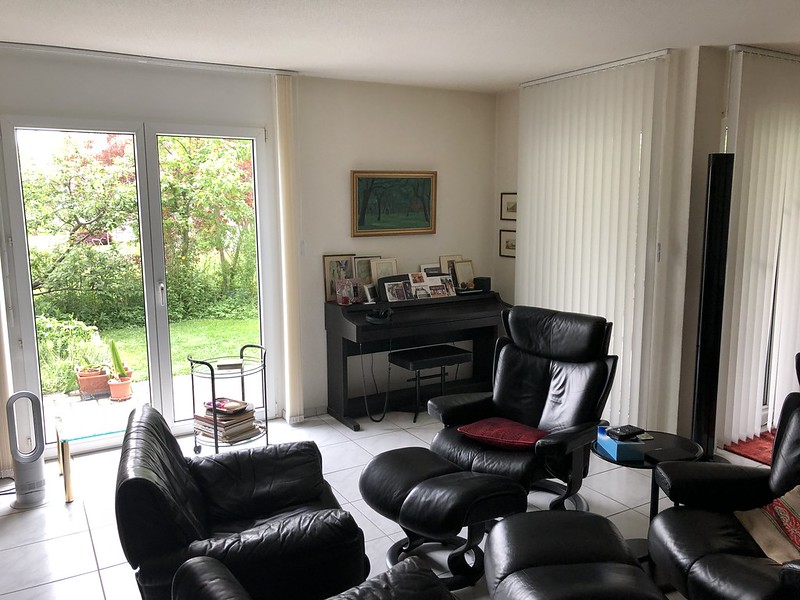 They were not even looking so bad because they are below the balcony on the next floor and protected from the rain. Only the window on the left was more exposed but I am a window person. I have a good operational system and if you do the work regularly it takes me about 40 minutes of my time to do it. However, the last window in this room was cleaned four months ago. I gathered my courage and strength together, armed myself with a cane and with wobbly knees I begun to clean. When I clean windows, I also clean the frames just to keep it all under control. My logistic is very easy: clean them regularly, like one side of the apartment one week, and the other the next week, and then they do not really need a battle, just a good wipe over, but now? 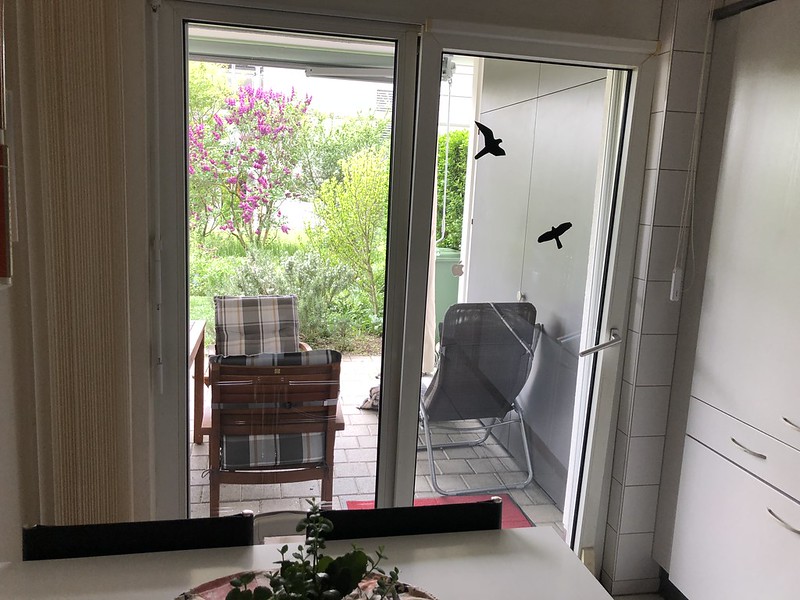 The first windows I attacked were the kitchen windows. I moved onto the living room and eventually I did it. The last cleaning bastion, the last obstacles in my new life with a broken leg that is now repaired, were conquered.

The tide had returned and I could admire my achievement. Mrs. Angloswiss is back again, or is there something I still have to do? I  could perhaps …… “doesn’t come into the question” did I hear Mr. Swiss who was relieved that I completed my task with no injuries. He is now replacing the furniture that I had to move away from the windows. 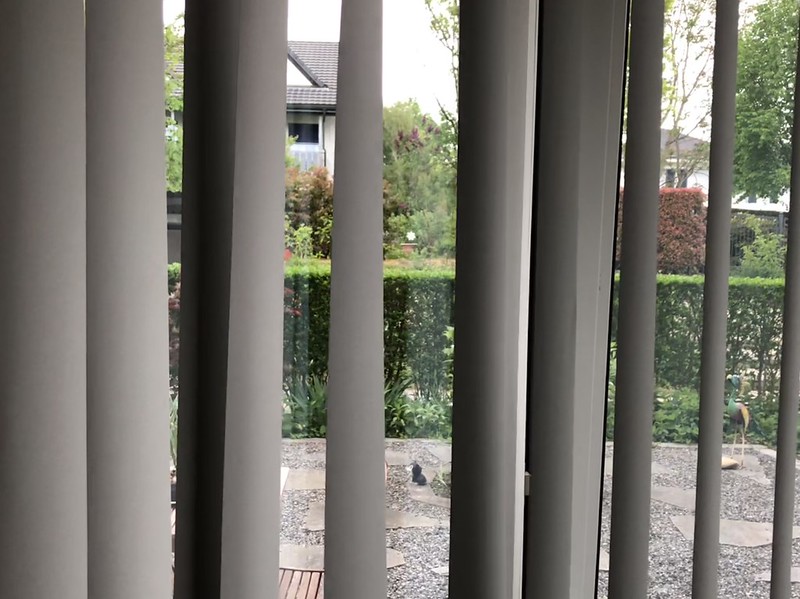 Another cooler morning with no clouds above, although it is not raining. I spent too much time hugging my bed this morning and then I got a cramp in my left leg, the one I  broke. Actually it had nothing to do with my injury, but I did a strange movment in bed. The problem is that I can no longer jump out of bed and operate pressure on the leg or a massage to stop it feeling as if it were in a vice. I was moaning with “ow” but no-one heard me – I could have collapsed or who knows. I eventually managed to stand, with support from my walker and feeling slowly returned. I decided I still had half an hour and went back to bed, so is the life of a golden oldie.

Eventually my bird song online alarm sounded and it was time to visit a certain place that we all visit first thing in the morning. It was occupied and the second place (we have two of them) is out of bounds to me, because the seat is too low and I have problems standing again afterwards. When I was in action I approached the window which was still covered with our curtain stripes. I reflected to last year when the builders had moved in. We had never bothered with curtains, but our metal blinds were being removed and so we had to organise some sort of window cover fast. We decided the strips were the best solution and I am glad we did it.

We now have new blinds, but only use them at night. Now we have these strips that we can move to hide the sun, or open for a view outside. 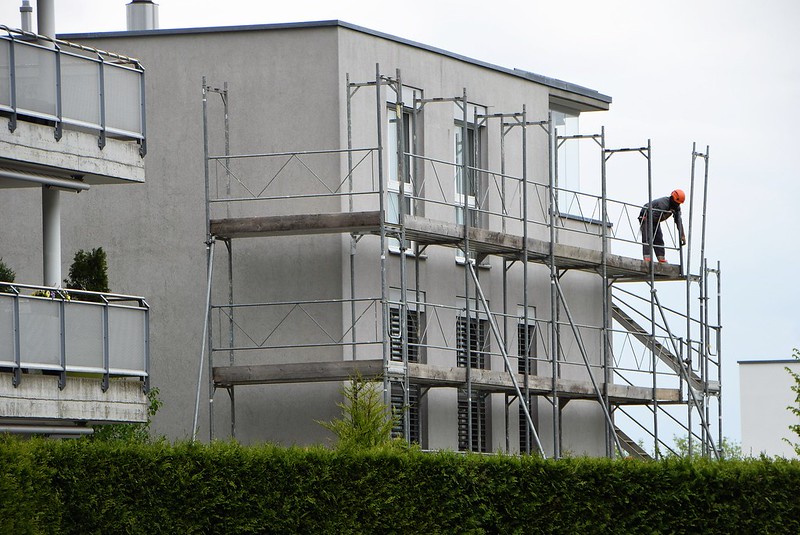 It is now the turn of the others in the building opposite to suffer through the summer that never was, although it will not be such a long job as ours was, as they also replaced our insulation, although I still do not understand why.

Yesterday we had a little mix-up with doctor appointments. I organised a visit to my neurologist, had to call back to change the appointment for a day earlier and everything was fine. When Mr. Swiss entered it into his appointment calendar he realised that on the same day, almost the same time, he also had an appointment at his doctor. On top of this mixup the cleaning lady would also be coming. Eventually he could shift his meeting to the afternoon and my morning appointment remained. Even golden oldies have a busy life. 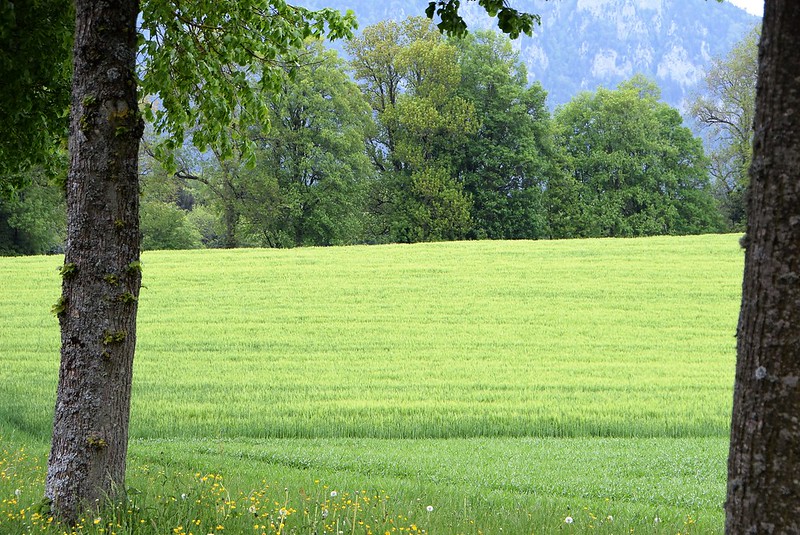 Yesterday was not a day that locked me away from home so I stayed indoors and looked after my computer. There was yet another IOS update on my various iPads and telephone to cure various problems. I did not have any problems actually, but I suppose the engineers have to have a purpose in their lives.

And today is the day of week-end shopping. The plan has been made and we are almost ready to go, with just a few cleaning up operations in the apartment to be dealt with. I am sure you are all looking forward to the week-end ahead so make the most of it. 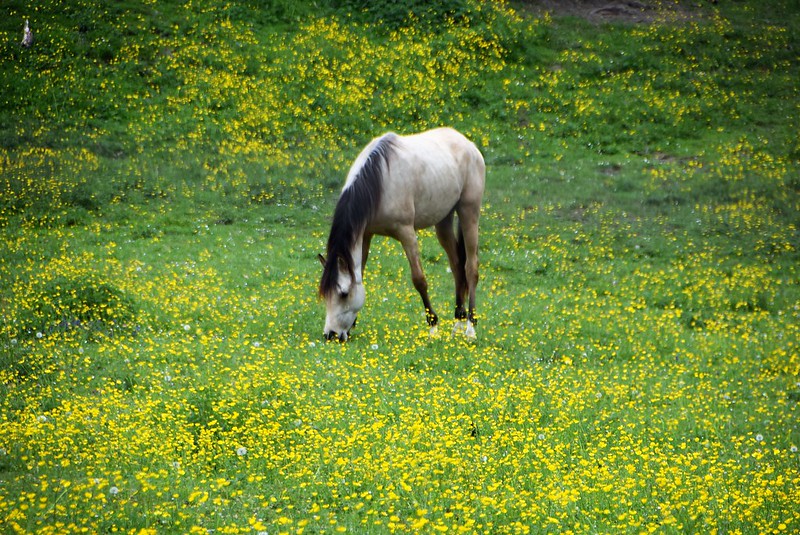