Even just a plain old geranium has its beauty.

They called him Happy because he looked so happy: a nice red nose, to match the pompoms on his shoes. When Janet saw him she knew she just had to have him. He looked so alone outside the shop trapped in his cage.

“Please mum, I must have him”

And so mum gave in and bought the clown in the cage, just for peace of mind. Janet could be very annoying when she wanted something and did not get it. When Janet’s mum saw the price, she decided it was not so bad. So cheap and even with the cage. That night the house was still until they heard the faint sound of a drum, although as Happy was in Janet’s room no-one really paid attention. Janet was thrilled, a clown that even played his drum for her.

It was only when it got just a little louder each evening that it began to notice and even the neighbours began to complain.

And now Happy lives outside in the garden and no longer plays his drum.

Some clowns are just not suitable for the indoor life. 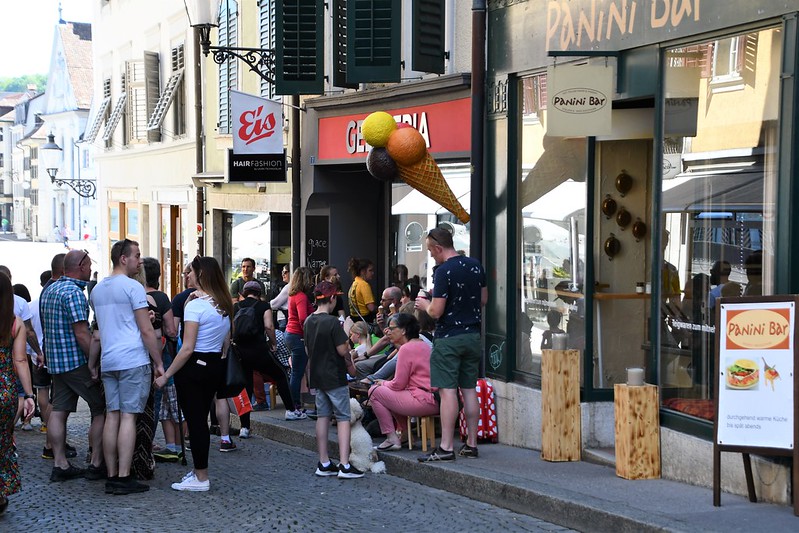 Are they having a sale? Is it a special offer for something at half price? People are queuing and there is no more room in the store, so the queue spills onto the street, even into the road. There are even seats supplied for those that cannot stand whilst waiting.

It is our one and only gelateria in town, the place where they sell a complete assortment of various ice cream flavours and it is good ice cream, so they say. Unfortunately I just watch the others eating the ice cream, enjoying the delights from the cones and savouring ever lick. Lacktose intolerance is not very pleasant. I think I enjoyed my last ice cream at least 15 years ago.

One of those unique photos of Mr. Swiss. It might even get a Pulitzer prize for spontaneous photography, although I am not quite sure.  He really doesn’t look very happy. On the other hand, portrait photography is always unique.

All the real action happens in the distance at our place. On a good day, from a high place, usually the local castle, you might be lucky and get a view of the alps, which was the case this week. They are further away than you think, about 2 hours by motorway, not counting the ups and downs over the hills until you get there. 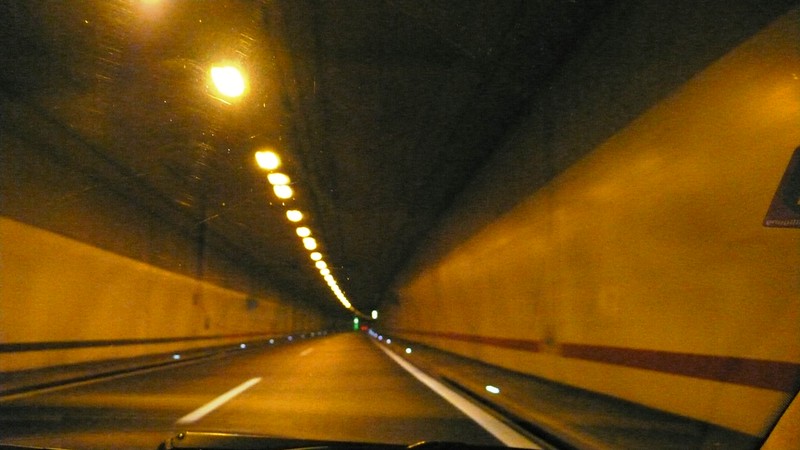 Or often you can just take a tunnel which go below the hills and mountains.

Looks like another pleasant Summer day today. I do not have any plans. The stores are shut, so no shopping. The cupboards have food and I just might go for a wheelie this afternoon. My wheelchair is uploaded with electricity and it will last for the next two days. Actually I am now running out of places to visit. I suppose I could take a train somewhere, even a bus, but my wheelchair is not so versatile and it would have to be my walker, and then I am not so versatile. It seemed strange yesterday that I really did not have to buy anything in a store. I am now so well organised with home deliveries and a deep freezer that I have almost everything and Saturday shopping is slowly a thing of the past. I even had enough at home to cover until Monday lunchtime.

And so yesterday afternoon I decided to just go where my nose took me, which eventually ended up in town, but not too long. As I left my home the first thing I see are our local lavender plants, so decided they also deserve a photo, they are doing well this year. And then I saw some movement. A hawk moth was busy organising its lunch amongst the flowers. I decided now or never and clicked away with the camera hoping to get an action photo. Success, it hovered long enough for two or three good shots (although I must have taken at least ten). I find them fascinating creatures as they spend most of their life hovering around.

Another meeting was with this bee that had discovered a thistle. The spikes did not seem to bother it.

I took the back way into town hoping that the storks would be around, but at the moment they seem to be having flying practice somewhere, probably in training for the big journey to warmer parts when Autumn arrives.

I managed to capture this pair, still perched in their nest on the chimney of our local concert hall. It seems the higher the better.

As I was on the other edge of town I made my way to the central part, meaning a very bumpy ride through some small alleys, but was rewarded with a good view of our clock tower with all the trimmings peeping through.

I then decided it was time to make my way home. I had a chicken to cook for the evening meal and a few photos to upload.  Afterwards it was a TV evening, although nothing special. Mr. Swiss disappeared off to bed and I was left with a TV all to myself. Some days ago the TV guy was here as we found the TV we had was not functioning as well as it could, although I had no problem and so he left a substitute. This time he programmed all the British programmes from BBC1 to 4 and the two ITV programmes. ITV is quite useful sometimes. They have advertisements and you can always deal with something else whilst they are on. I do not record TV programmes because I do not see the logic. I rarely have time to watch a complete programme. There might be a washing machine to fill and wash to hang up, or a dishwasher to empty and recording programmes means finding time to watch them. Anyhow yesterday I noticed that “From Russia with Love” was on one of the programmes so I decided to watch it (for about the 20th time). I had not seen it for a few years and had a nostalgic evening with a very young Sean Connery as James Bond. I did not watch it until the end, otherwise it would have been past midnight. I also realised that most of the actors were now dead or retired which was a little depressing. Sean Connery is still going strong however, but no more the young dynamic secret agent. He now seems to play father figures.

So let us move one with one of my photos of the Jura mountains taken from the local road on the way to town with its seasonal sunflowers. Admittedly it looks like all the others, but the clouds are different at least.

Wishing all a good Sunday and may the virus hairy peas also be celebrating a Sunday rest today.