I saw this tiny wild plant growing in a bed. It was not one of those ornate planned flowerbeds, just a bed of flowers that their seeds found. I was really short of a flower today and decided this would be my choice of the day.

The adventure then begun to find out what it actually was. I had a look in my plant identifier and it told me Linaria vulgaris. I found this was not a name to make us all happy and then I found the people’s description. It is commonly known as butter and eggs. I found this a really good description with the yellow enclosure of petals and the central yellow dot. I think this has become my plant of the month.

The afternoon began quite well. Mr. Swiss decided to come with me into town. His new sun glasses were ready at the optician. I lead the way in my electric wheelchair and he was following (as always) in his scooter. He has now had the scooter for a few weeks, but is still in the tentative stages. I remember when I first got my wheelchair, I achieved my goals slowly, no good rushing into things. Now I am a full professional and speed around everywhere, leaving them all behind me.

So Mr. Swiss and I reached town. I was overjoyed, it was market day, a  feast for my camera, wonderful weather and lots of action. Mr. Swiss? not so much and the last words I heard from him somewhere in the distance when he saw what was happening was “Market Day, No, I am not going into town”. I had no choice and in any case I was having fun, so I continued through town to the store. I had no idea where Mr. Swiss had gone.

Eventually we communicated by telephone and he said he made a detour in town to avoid the crowds, eventually found a parking space for his scooter and walked the rest with his stick. The main thing was he got his glasses.

He is still at the tentative stage with his new transport, but I am sure he will gather confidence as he progresses. 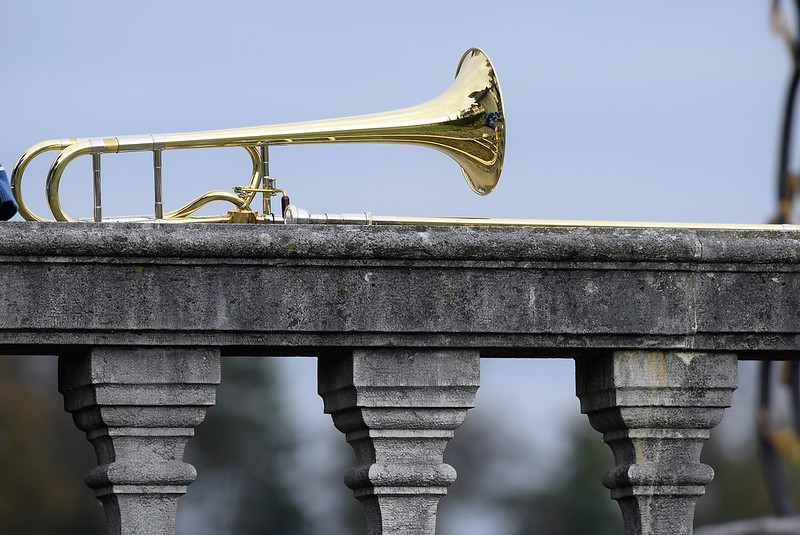 A strange object to be seen on a resting place at our local castle. A trombone and no-one to play it.

I was taking a walk up to the castle and in the grounds there was a concert from a local brass band. Unfortunately I was too late for the performance and the musicians were already packing away their instruments. I hope that the trombone player did not forget his.

Flowers is such a wide term, there are thousands, millions, and at the moment they are all jostling for a place in the landscape, so I decided on a glimpse of what is happening at the moment in my garden with some coreopsis and gaura.

What a nice bright morning it looks with some fluffy clouds floating around. I am now sitting outside making the most of it with my breakfast and a cup of tea. I did not go very far yesterday, actually I stayed at home. I was not feeling so good, had a bout of cystitis hovering around. I used to be a constant sufferer, but since my big operation it left me in peace and only attacked once in a blue moon and yesterday was one of those blue moon days. Luckily I always have an emergency ration of medicine at home from my doctor as it is most painful and bothersome when you have to wait until Monday to see the doc, which was my case this time. At least I had a painless night and slowly things are again normalising.

So this morning not so many prize suspicious photos, but just from my garden. My apple tree is progressing and it looks like the harvest will be quite good this year. Of course the apples are not quite ready, but when September arrives they will certainly begin to show their colours.

So what do you do on a Sunday afternoon at home? I spent a little longer with my after lunch sleep and then moved on to the computer. I really had a sort of lazy day, but had no energy for anything else. I even got around to reading a book I begun about a month or more ago.  It is about Guy Burgess, the British spy who knew everyone according to the book cover. It comes from the days when there were a few British MI6  agents that deflected to Russia and took all their secrets with them: Burgess, Maclean, Kim Philby and even George Blake, who is now a very old man still living his chosen life somewhere in a dacha near Moscow. It was an interesting time in a way. Mostly they were university students that got a little infected with communism before the 2nd world war. They graduated and mostly had government jobs with connections to secret information. They  passed on their information to the Russian secret service until they made their dramatic escapes to mother Russia, where they stayed for the rest of their lives.

I spent the evening with the British TV and after doing some channel jogging discovered that there was an episode of Maigret, the french police detective invented by the author Georges Simenon. I remember watching a series in the days of my English life with Rupert Davis as Maigret. This was naturally a new series and Mr. Swiss was watching it with me and said that Maigret seems to have a strong resemblance to Mr. Bean, one of the British comedians. I googled the programme and discovered, yes, Maigret was being played by Rowan Atkinson, Mr. Bean. Of course he is now a little older, but did the job quite well.

And that was my boring, uneventful day. Today is Monday, the beginning of the week and I am hoping for a little more excitement. At least I will be visiting the shops and Mr. Swiss got news yesterday that his new sun glasses are ready to pick up, so he will be on his way this morning with his scooter to town. I have already planned my shopping list.

And now I have to remove todays meat for lunch from the freezer, otherwise we will have to carve it with an axe. Have a good begin to the week and may it be a good, safe and above all healthy one.