Whoever designed this years flowerbeds in town were really having a vision in red. 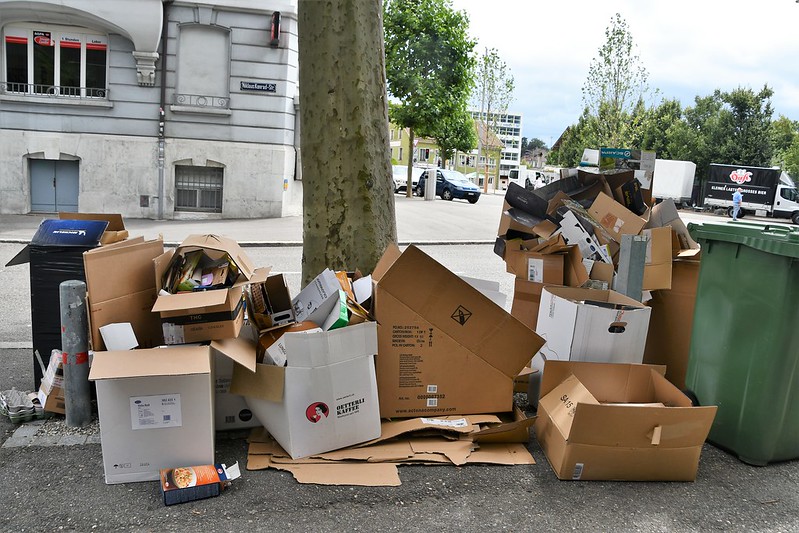 Neat and tidy Switzerland, where everything has its place also has its dumping grounds. However, it really does not matter. According to official instructions all unwanted cardboard boxes should be placed on the edge of the pavement for collection on a certain day. I happened to be walking past with my camera on that day.

This is one lazty duck. She made her nest in exactly the same place as last year, on the landing stage next to our police boat (we only have one in our town). Actually it was the reason I found it, although I really did not expect that a year later a duck would again build its nest in the same place.

Some ducks are just too lazy to find somewhere new. I will be keeping an eye on her for when the ducklings arrive.

I am missing the sun. Last seen about two days ago, and trying to show itself now and again with no great success. Although the rain has made no progress for the past day, it is still lurking and this morning, whilst I was still hugging the bed, it decided to refresh my garden, which is not so bad. At least I do not have to do the job myself.

In spite of the negative side of the weather I did venture into the unknown yesterday. Mr. Swiss had to visit his doc in another part of town, what would be our suburb, although our town is so small, it is more a different direction. In London if you travelled South, you went over the water according to my mum, which was the other side of the Thames.

Here you just walk over our footbridge to the other side which is the suburb. At the moment they have dressed up the entrance to the “suburb” with an artistic effort for our so-called Zarte Exhibition, which is a play on the word “Art”. These strange objects are cropping up everywhere, but no-one really knows what they are and who put them there.

When you eventually arrive on the other side of the River Aare you notice that something is happening on the main square. It is also the home of our cheese days where the cows are presented to choose the best mooer. However this year no cows, as they do not understand the meaning of social distancing, and we are the ones that make use of their milk. A small group have decided this square should be dressed up with various potted shrubs and naturally a small restaurant to go with it. The work began yesterday and today it should be completed. Naturally I will pay a visit, but no rush. It will be there for the remainder of the summer and I have other things to do at the moment.

In the meanwhile you can visit this restaurant opposite the square. I am not sure which part of the world its food ideas are to be found but as their main speciality seem to be kebab I assume it originates in one of the Balkan countries.  At the moment it does not seem to have many customers.

I deposited Mr. Swiss at the doc where he could park his scooter outside and made my way homewards.

This time I crossed the river by our newer footbridge which is beneath the road bridge It is our newest bridge over the river. I remember it being built. It was added at the side of the old bridge and during the construction the old bridge was slowly being removed as the new bridge was added to it. Quite a good feat of engineering. I have some photos somewhere of the building progress.

And now I should make some progress in my apartment with a few chores.  Today I have a shopping expedition, but will probably only visit the store along the road to where I live. Due to my logistics and careful planning, the week-end food is mostly already sitting in the deep freeze or refrigerator.

Before I go, here is a photo of our so called Landhaus on the banks of the river Aare. This is not in the suburbial part of the town, but the main part on the other side.

Have a good day everyone.