I have been watching my tansy growing for the past month and at last the flowers have arrived. Nothing really special, but a useful plant for the ground. 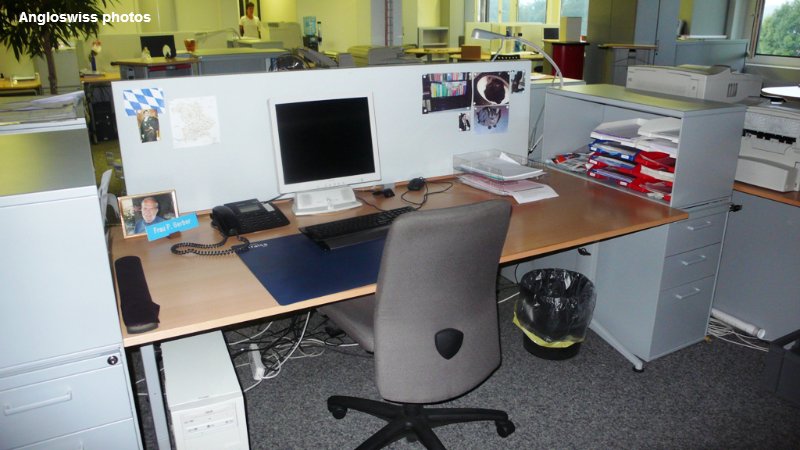 Equivocating became a hobby of mine, I was quite good at it. This photo of my desk when I was a working woman really takes me back to the days when life was mainly making documents for shipping goods all over the world.

Being the only Brit in the company with an english mother tongue, my main countries were english speaking, amongst others Asia and the middle East. Whether it was China or perhaps even Pakistan it was Letter of Credit business where you had to complete documents exactly according to the words written in the Letter of Credit and that was not always easy.

However, my boss would keep an eye on it all, meaning he left it up to me to do the right thing. He would often ask whether I had solved this or that problem, and so my answer was always I am working on it. That seemed to make him happy, although on my side of the desk it was really more luck than judgement.  I noticed that “working on it” gave him a secure feeling.

I would add I never had a Letter of Credit that  failed. We always got the money somehow.

We do like something sweet in the afternoon. Mr. Swiss was saying how much he misses the lemon cakes that I used to get in the large supermarket when I still had a car. Our local store does not have them usually, but I saw in my online information that there is a special offer this week for lemon cakes, a bit different to the ones I used to buy, but even better: layers of  cake with cream in between and all topped up with a yellow lemon syrup and even a little piece of chocolate on the top.

So I went on my quest this afternoon and yes, they were there. Unfortunately I had other samples of food to buy. Being in a wheelchair it can get a bit complicated so I load one bag and deposit it near the cash desk and then I begin to fill the second bag. It is all a matter of logistics eventually. When I get to the cash till I have to move two bags onto the desk. Generally no problem, but in the effort of lifting and organisation the box containing the two cakes tipped over and the photo is the product. My lemon cakes became two cake dollops.

I managed to reconstruct one of them for Mr. Swiss and I have eaten mine in the meanwhile. I do not think Mr. Swiss minds so much, he was sitting in the dentists chair for more than an hour this afternoon having a tooth reconstructed. He said he will eat it later. Perhaps I should liquify it for him, although dollops are quite soft to bite.

These birds were looking for a shady spot.

A mixture of good clouds and the sun rising over the local trees, what could be better to welcome my day. The beginning of a new week, and I hope it will be a good one. At the moment I am a little restricted in my movements, waiting for a new battery for my wheelchair. The one I have is functioning OK as long as I stay on my usual flat stretches, but I do not trust it completely when it has to climb a little higher. Yesterday I chanced a trip to the local castle and it worked OK, but I noticed a little decline in power as I reached the castle and it was only a gradual climb. As I returned towards home it was downhill and everything back to normal. Changing the battery is a matter of half an hour and the guy will do it for me at home, but last week it seems they had no suitable batteries, and so I have be told this week. I hope it will be soon. Just visiting the local supermarket for shopping is OK, but I do like to go to town now and again.

So it is just local views from the top of the hill towards the villages South of ours. You can see the chicken pen at the front of the picture and our village church at the left of it. Otherwise it was really a lazy Sunday with no great excitement. Mr. Swiss accompanied me on my wheelie in his scooter which is really good. At last he can get out a little more.

I also took a short cut through the cemetery, but there was not very much action there.

The only movement was a flock of birds that decided to give a fly past.

Otherwise my evening entertainment was one of those adventure films, Raiders of the Lost tomb, based on one of those Lara Croft computer games, but with real humans playing the roles. I must admit I quite enjoyed watching it, although it was not exactly the height of intelligence: lots of treacherous paths in the tomb and eventually the discovering of a dead queen coffin. Lara Croft escaped at the last moment and I found she would have been a good candidate for the Olympic Games in sprint the way she raced through the tomb at the end being followed by one catastrophe after the other. The only injury she seemed to have was on her arm that was constantly in a small bandage, but I have no idea what it was. I ask myself why I bother with such films.

And now for some action of the day whilst my other half sits in a chair and studies his iPad. I also study my iPhone, but only to add to my shopping list which reminds me I still have to write one. The excitement of daily life is planning what to buy and eat.

I now should move on. For some strange reason I decided that I should clean my oven today. I keep meaning to do it, but somehow forget. I do like to see through the glass door what is cooking without avoiding the trial of  marks of previous cooked dishes.

Have a good day everyone and hope you have a good week ahead.