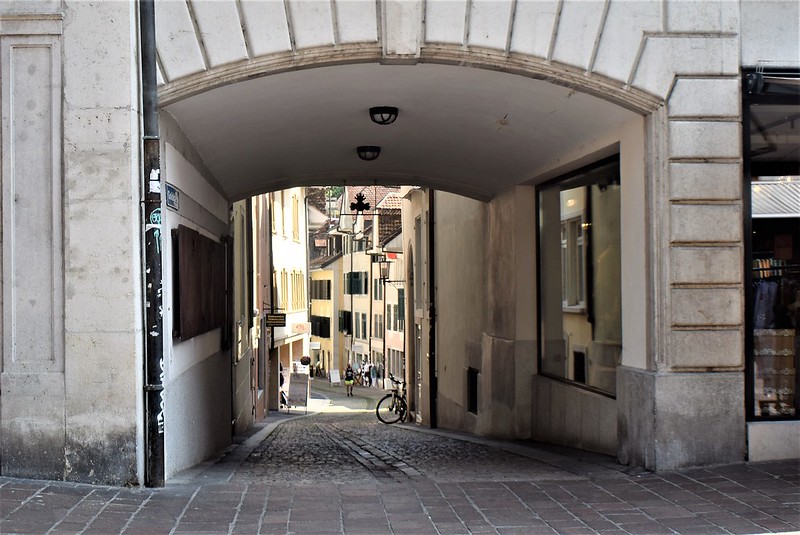 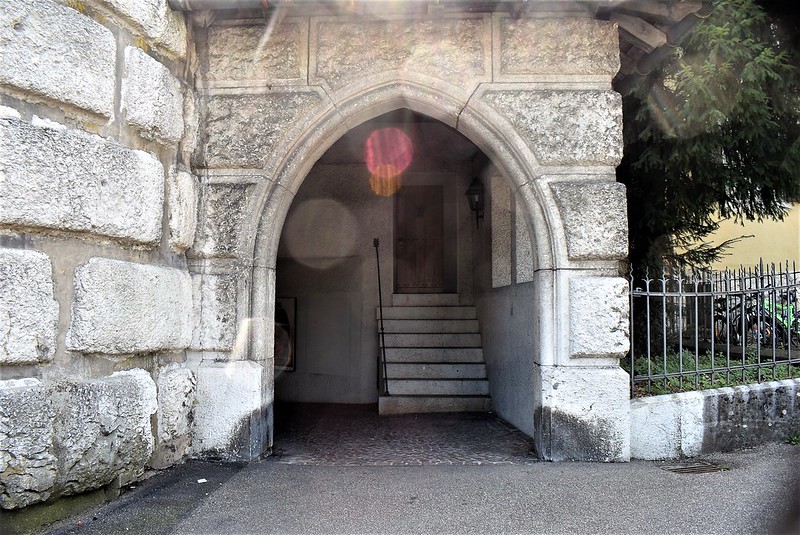 Through one of the old entrances to the town of Solothurn, Switzerland, the Basel Gate. It is also the way I might take with my wheelchair: quite bumpy but we had the sidewalks and roads repaved in the old town with cobbles. 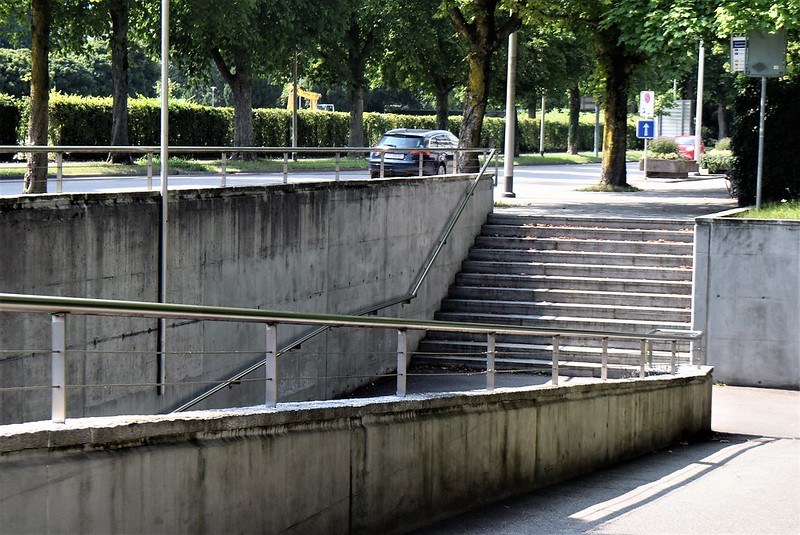 And for me down the ramp and up again at the other side of the main road: the safest way to cross the road to get to the other side. 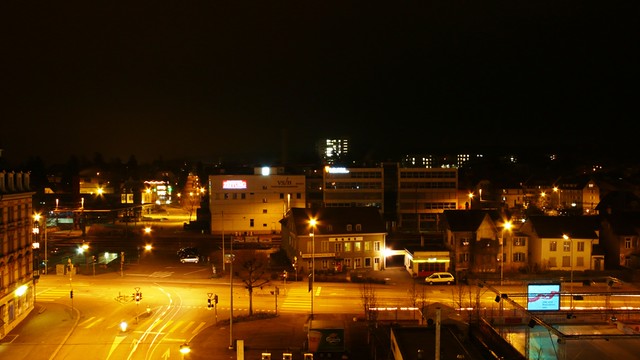 A view by night across Solothurn south, Switzerland, taken from a balcony. 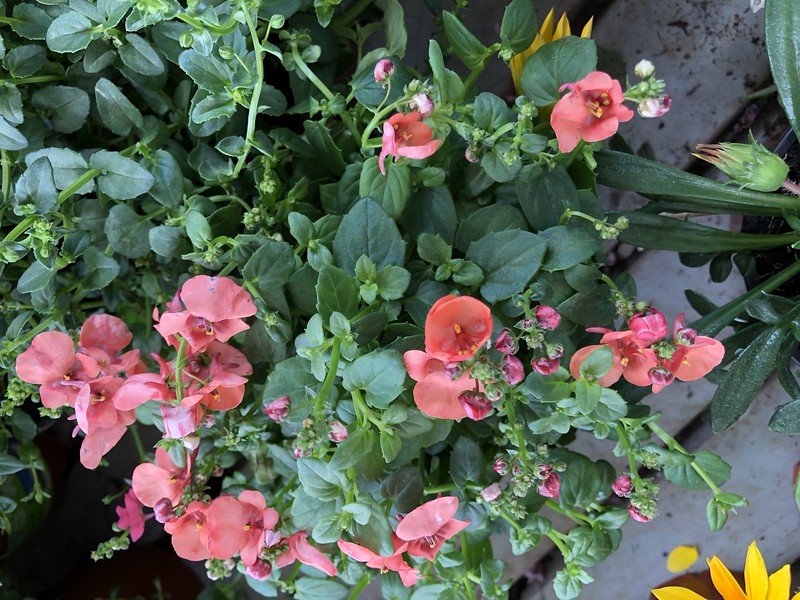 To be quite honest I had no idea what this was, but now have an app PlantSnap, recommended by an online colleague which helps me to identify my flowers. There were a few choices, one being Crown of thorns, but the begonia version seems to be more likely. 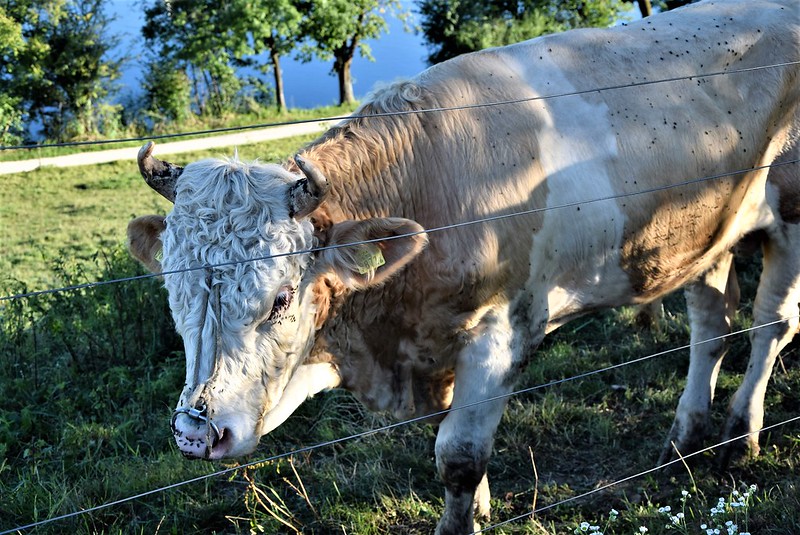 Let’s got for a walk and visit the cows
said my husband to me, I was in the mood for some prows
So we wandered uphill, the cows were in a troop
I took out my camera and was beginning to shoot
Suddenly my husband arose with a pull
He said I am not staying here, there is also a bull
I thought all cows had horns, and were easy to detect
My husband knew better, from bulls he had respect
I was still taking photos when my man disappeared down the hill
He said keep away from the bull, he might intend to kill
And I thought he looked so sweet with his nice pointy horns
My husband was sure they were a crown of thorns
When we departed the bull looked so sad
no-one likes a bull, he is a cow’s dad
I waved to him carefully, it was the thing to do
He followed my waves and started to moo
Then he stamped his hooves and charged in a blast
And then we began to run,  to getaway fast. 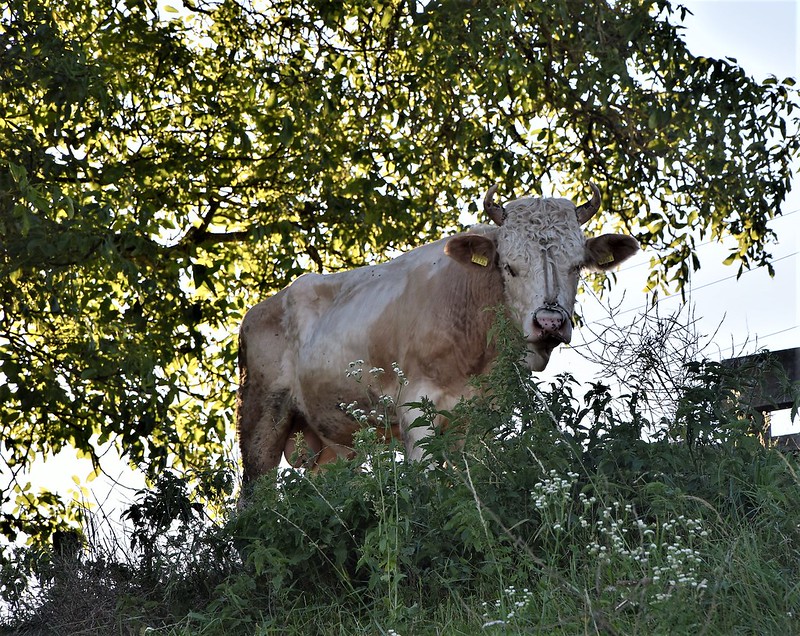 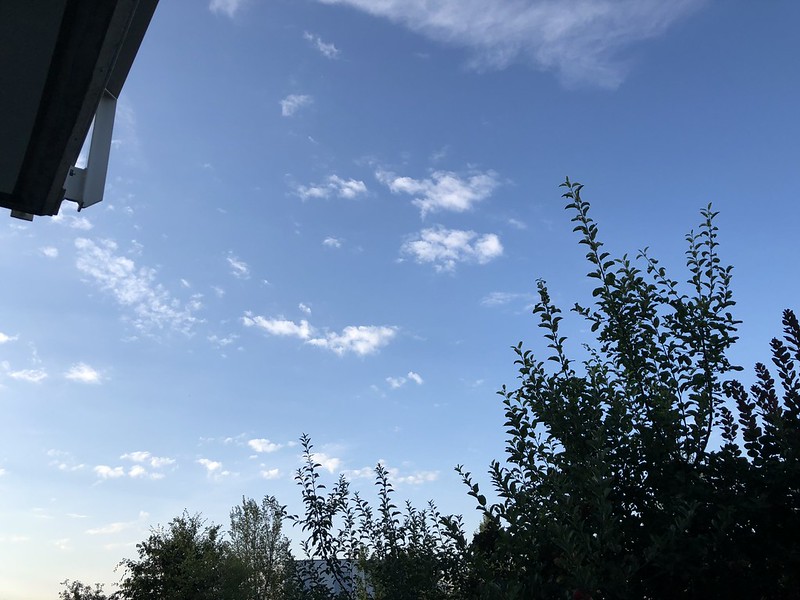 I was surprised to see a few cloud remnants floating above this morning. The sun was shining again and it looks like another heat day. Yesterday it got so hot in the afternoon that I decided again a wheelie in my chair. It is not fun going out for a tour with the sun beating down. I though we would have an end to this constant intensive summer weather, but it is continuing. I used to like the summer days, but I was then younger. Now I prefer to sit outside in the shade.

I was wondering what to say this morning as life is not so exciting at the moment, although as I was sitting here this morning I had had a highlight. 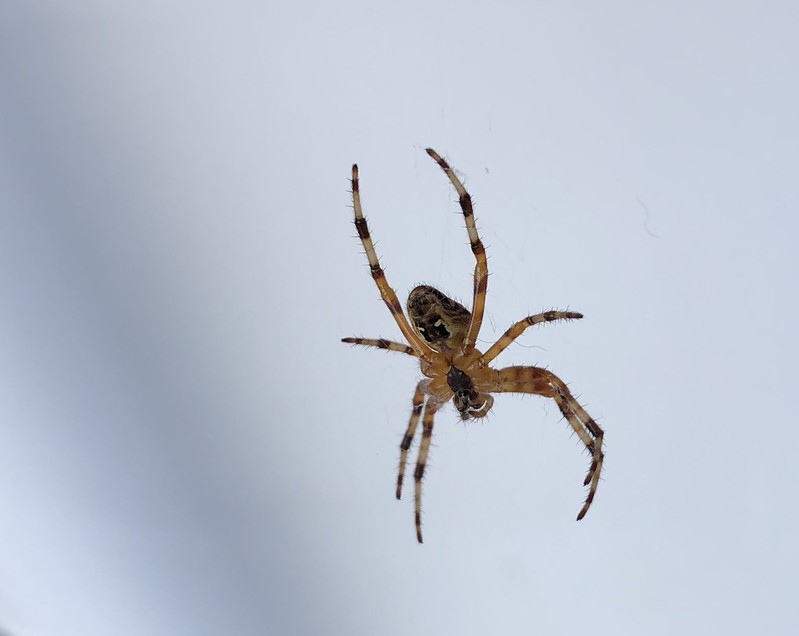 There he/she was hanging in front of me suspended from our sun umbrella. We have had a resident spider for some time hovering above on the porch, but this is a new one. It is not very often that they hover in a place where I can easily take a photo. I even managed to get the hairs on the legs and then I had a second surprise. 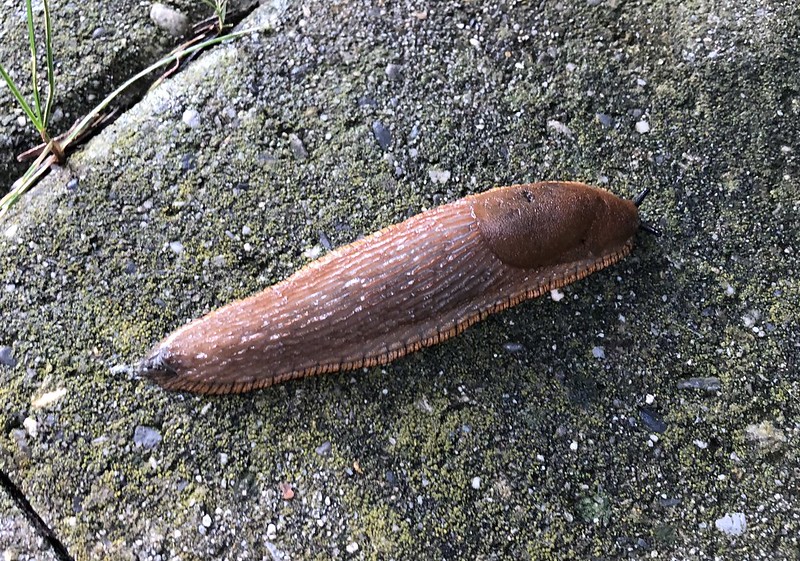 “Look at that” said Mr. Swiss who was drinking his coffee and munching a fruit bar next to me on the porch. He pointed to this slug and that was a big one on the edge of the garden. He is now slowly making his way back to my stone pile. I think he/she/neutral gender, must be one of the last survivors. The others are hiding deep in the earth away from the sun, but this one was probably the look out, advancing to tell the others how it was in the outside world.  It was mega big for a slug.

That seems to be the excitement for the day. Today we are off on a shopping safari to gather goods for the week-end. No. 1 son has already said he will be off to Zürich on Saturday so another day with a romantic lunch for two. We have composed our week-end shopping list which is getting less exotic at the summer week-ends. Food is now really a question of existence for us and no longer a surprise creation. I used to make pizza myself, but have now given up and we buy the frozen ones. It is quicker, less work and we eat them. For Saturday lunch we have even settled for a hamburger. They have nice spicy ones with chilli in the local supermarket. 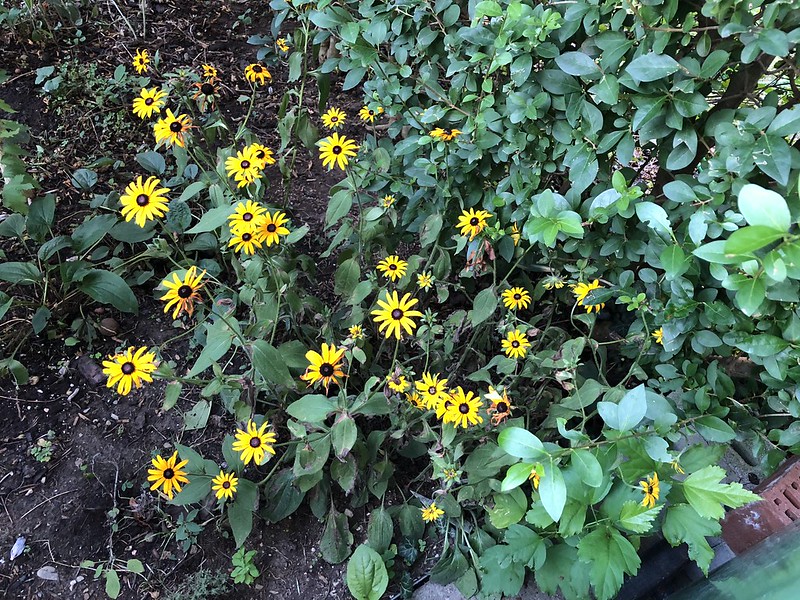 Even my black eyed Susans are coming up smaller this year. I think they have given up due to the hot weather and last year they were attacked by the builders we had who placed one of the wooden plants on the bed where they grow although they survived.

That is all I have to say today. Perhaps I might go on a wheelie this afternoon, the weather prophets did mention there might be rain on the way for the evening, so it might cool down and Mr. Slug will be happy.  I have been sorting my cameras in the meanwhile and have now put my Nikon 7000 back in action with its lens. It is a good camera, but over the last few years I used the Nikon 3000 more as it is lighter weight. I have now realised that wheeling around in a chair means that weight is no problem and I must say the quality of the photos on the bigger camera is better. I have also sorted out my lens, which are also heavier, but they are the little things in a golden oldie life that make it fun, at least in my life.

I hope you are having a good day, take it easy and make the most of it. 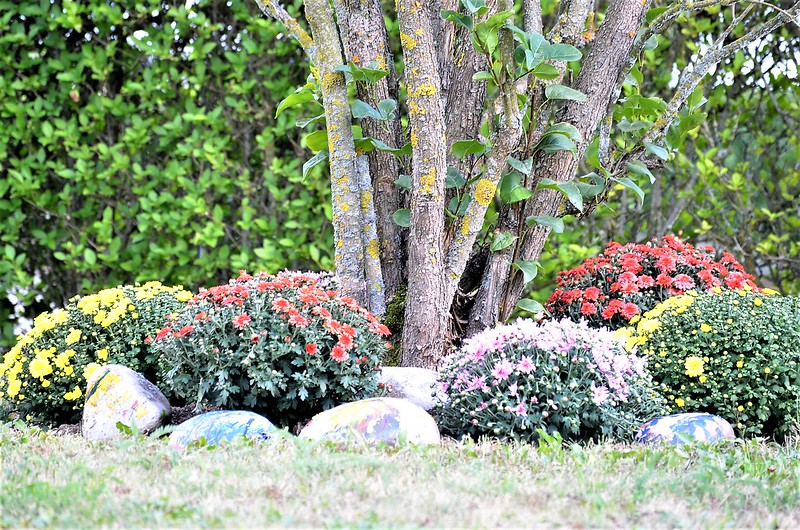 Something from the neighbour’s garden.