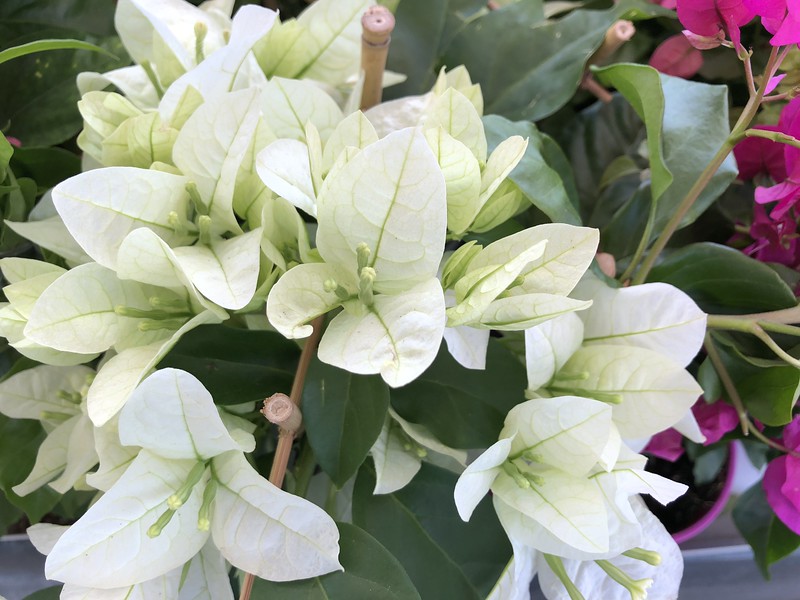 I must admit I did not know they also arrived in white, but I suppose everything can do white, even the various flowers. 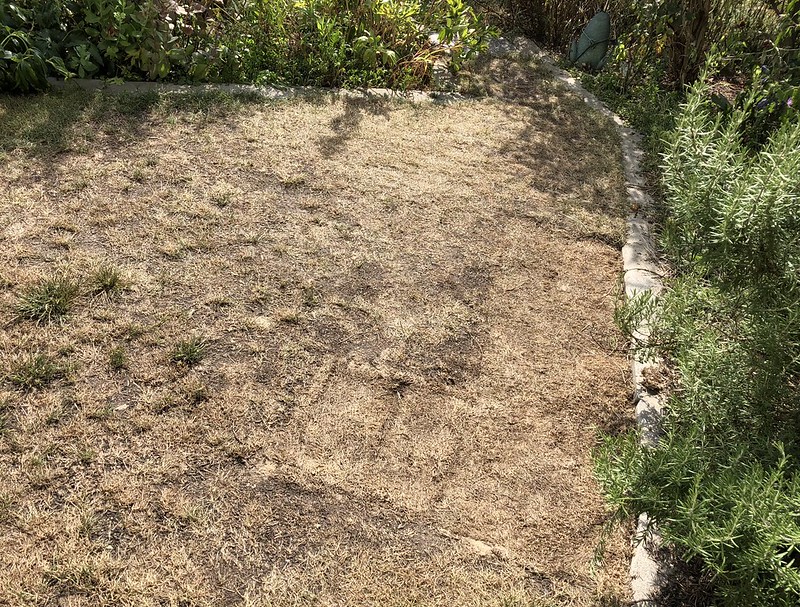 A community is a group of people living in the same place or having a particular characteristic in common. Ok, everyone, I live in a community. We all have burnt earth in the garden, those that still have a garden.  Once there were green fields kissed by the sun, but as the song says, they are now parched by the sun. This is my garden in our little village in Switzerland. It is a community and when you arrive fresh in the village it is a good thing to ask what can I do for my village and not what can my village do for me. Your want to fit in and meet people.

There were so many orgaisations that we could join, and I decided on the first aid group. 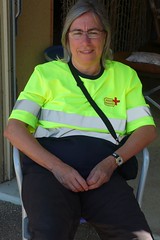 We would met once a month in the village and at week-ends might attend sports meetings to help with the injured footballers. Now that was fun, helping those strong legs to heal with applications of various creams. OK, they did it theirselves being the real men and did not need a woman to do it.  I never got the chance to apply mouth to mouth resuscitation, but if it was that bad we would have called for the professionals at the hospital. I enjoyed attending the evening beat groups sessions, rocking along with the rest and helping the fans to recover from their exertions on the dance floor. The photo is me waiting for the next patient. It was taken a few years ago, before I became  a golden oldie. Today I would be in need of help myself . Yes we villagers stick together and nothing goes unnoticed: births, deaths, marriages, divorces, you name it we all know it and often lengthy discussions will incur. Don’t you just love community life? We have a neighbour that ….no, none of our business. You just have to love a little bit of gossip now and again.

Now the talk of the village is what to do with our brown lawns which are no longer lawns and have become a product of the long hot summer with no rain. Now and again we hear a clap of thunder in the distance. Even the astronauts in the space station circulating above the earth find that everything in Europe is now brown instead of green. So what shall we do about it, is the earth gradually turning into a dying planet? Europe is showing the first signs, parched earth everywhere.

Today we made a decision to have our lawn removed and newly formed. We did it once before with the front garden and have decided to have something similar done in the back garden.. 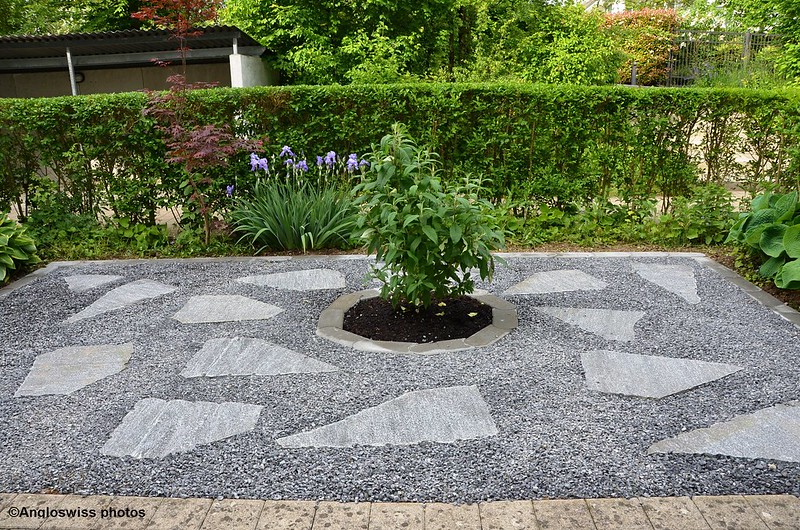 We have lost our patience. We will still have our green border with the herbs, roses and bushes and the apple trees will also remain, but no more lawn. Our parched moon scenery will be a thing of the past and the cockchafer grubs with their root munching sessions will hopefully disappear forever. 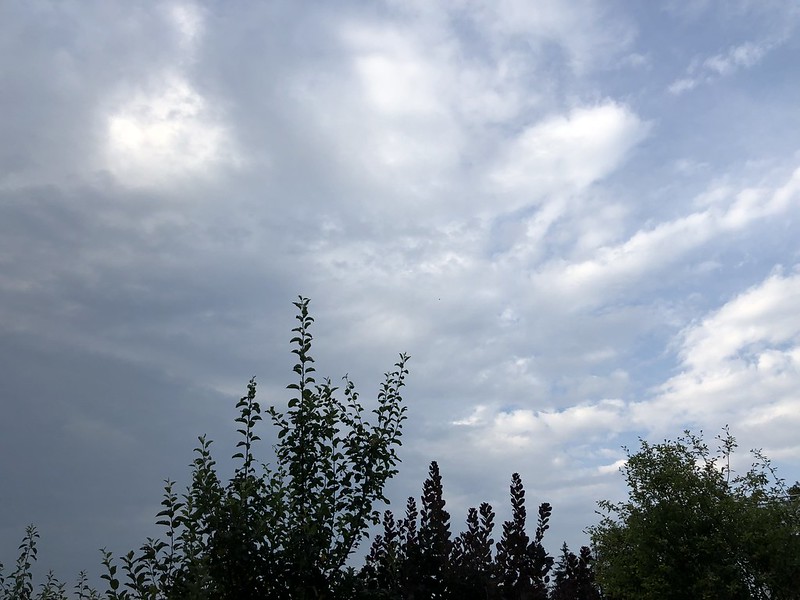 Isn’t it wonderful? No hot sun beating down, the air is fresh and moving and I am stitting outside on the porch enjoying it with my computer. I am now using my Mac more as it is really a lightweight computer, I can carry it everywhere and do not need to attach it with the cable to the electricity It has enough power for a few hours. And it seems that the heatwave is now at the end of the tunnel. Good summer weather is OK. It began with a great show of flowers. At the end of the two months of tropical weather we now all have brown lawns where it used to be green and crops shrivelling in the fields. 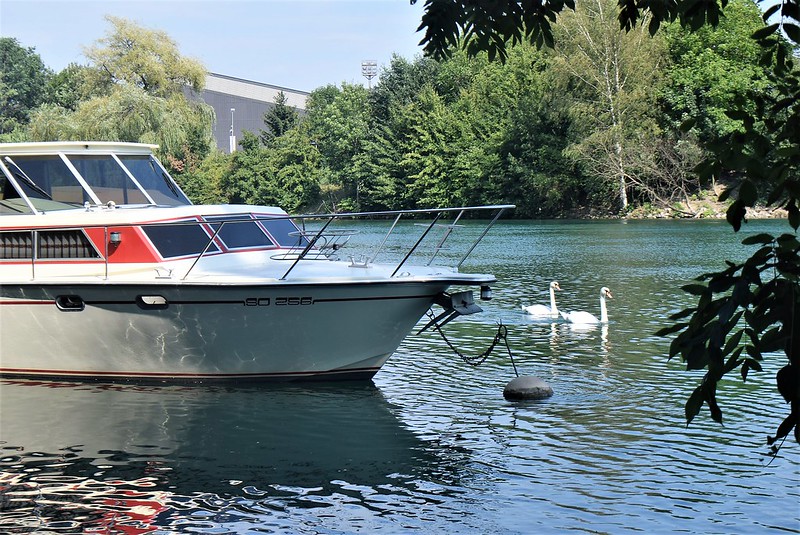 At least we have a river running through it and now and again a couple of swans show up, although through the heat wave the humans have also discovered the river as being a place to cool down.

And now for part two of my circus adventure. Yesterday was another hot day but it was the only chance I had to get into town whilst the circus is staying. Tomorrow they are on the way to the next town. I arrived at the smaller ticket office and noticed it was equipped with a slope to get in and out of the zoo. I waited until it was empty and drove up. I asked the ticket lady if it was OK to go ahead with the wheelchair. She said no problem, and when I gave her the entrance money she said she would make it half price for me and kept an eye on my manipulations until I got into the zoo part. 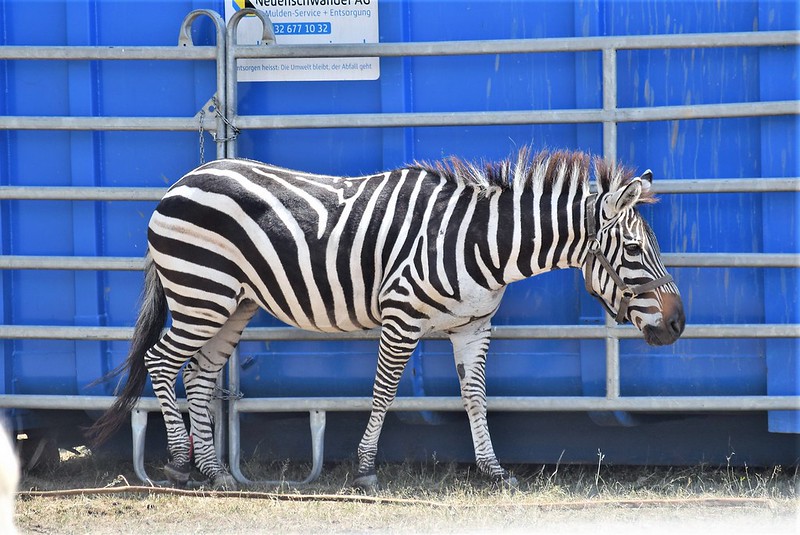 This was my camera’s first meting with a zebra. They are such photographic animals with their design. There were a few of them walking around, the hot weather did not seem to bother them so much. They seemed to get on quite well with the dromedary camels and shared the same space. 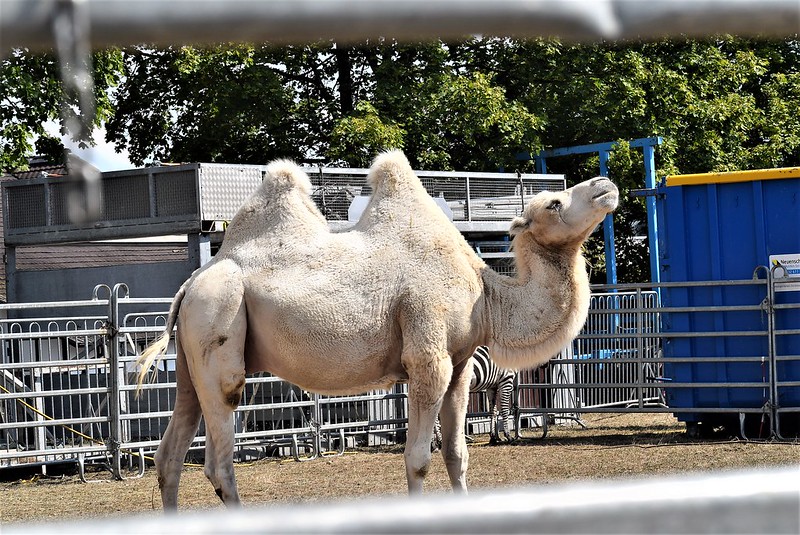 There was not such a great variety of animals to be seen. I think the circus has cut down on the elefants and big cats. I just read that the circus Knie decided no longer to have elefants in their circus show. They still have them in their headquarters in Zürich, but only for breeding purposes and for the public. They will no longer be performing in front of the public. They said it has nothing to do with public protests, but an internal decision.

The main animal in this circus seem to be the horses. 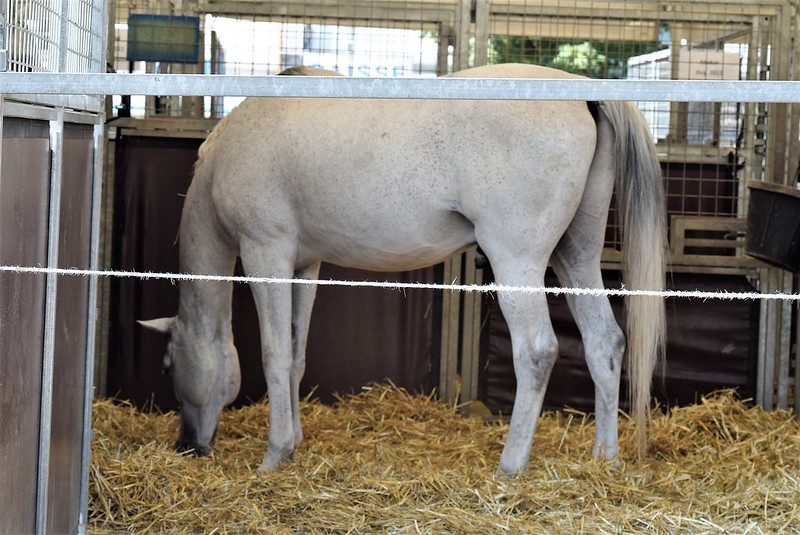 They had many in the zoo, each in its own individual box with its own food parcel. It has always been a speciality of this circus and they are not the sort of horse you might see in the local stables.

There were also some goats, but difficult for a photo as they preferred to stay in the shade. Of course there was the usual pony rides for the kids. 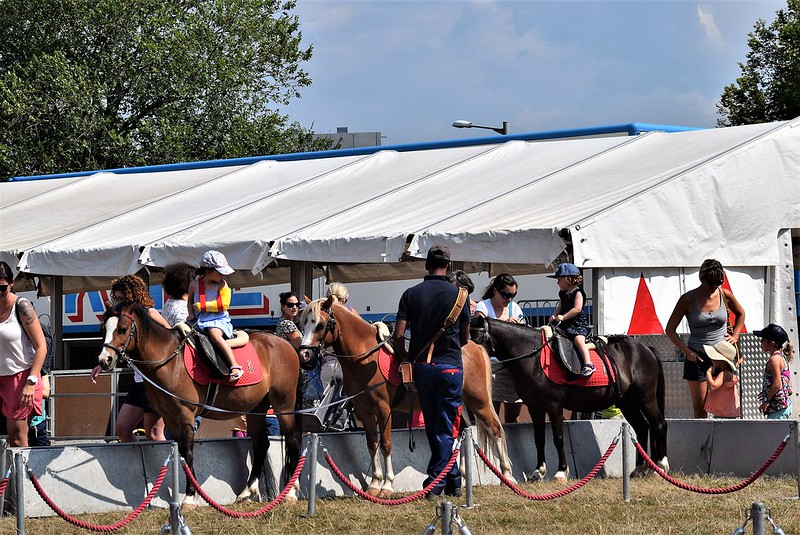 It reminded me of my younger days when I would be at the seaside with mum and dad for the holidays and I also had my experience on pony rides.

I did not stay too long, but long enough to get some photo material. It was a hot day. As I approached the exit and again had to roll up the ramp to leave, a very nice gentleman appeared and gave me a helpful push as it was a little at the limit of the wheelchair. When I left there was another golden oldie waiting with her wheelchair but it was mechanical and she had her own pusher with her.  Of course we exchanged a few words, and she said it was not so difficult after all. I again realised how you see the world with different eyes when in a wheelchair.

As I looked back, I was sure the camels gathered together for a farewell. 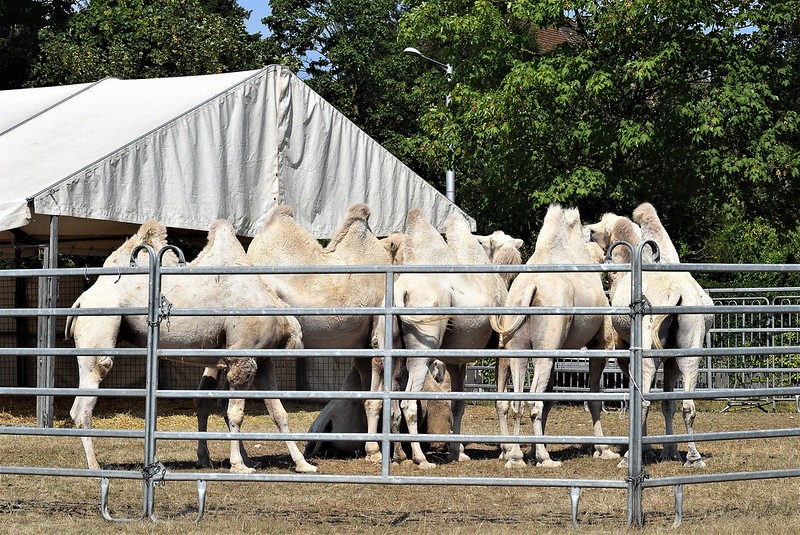