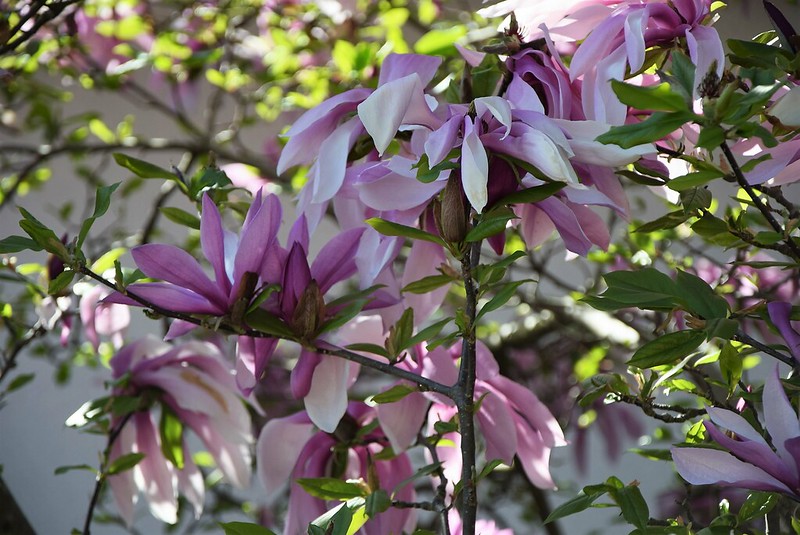 According to my app for plant identification, this is a Lily Magnolia. It grows in a garden near where I live and flowers in Spring when all good magnolias flower, so I suppose it must be one. It is not such a tall tree, and the flowers are sort of long petalled and floppy, very effectual. 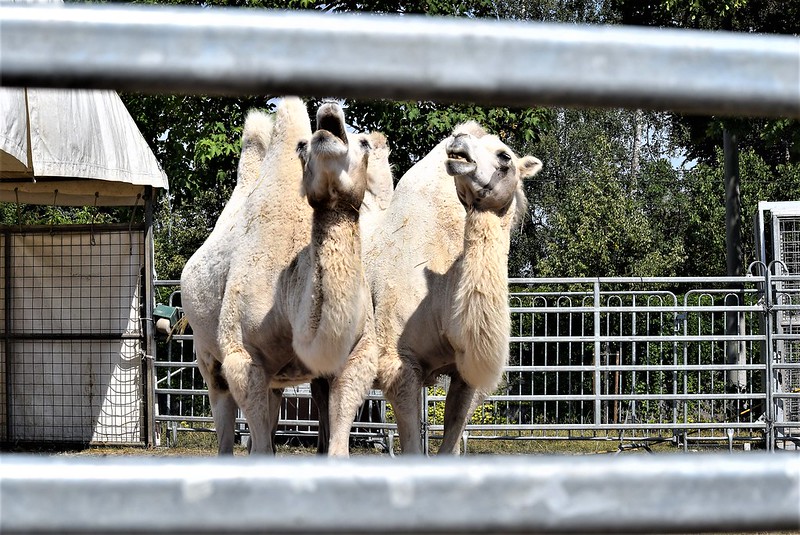 These two had probably had enough of circus life and wanted to be back in the desert. I think they were expressing their feelings with this look, or perhaps they were just being camel.

A Photo a Week: Attitude 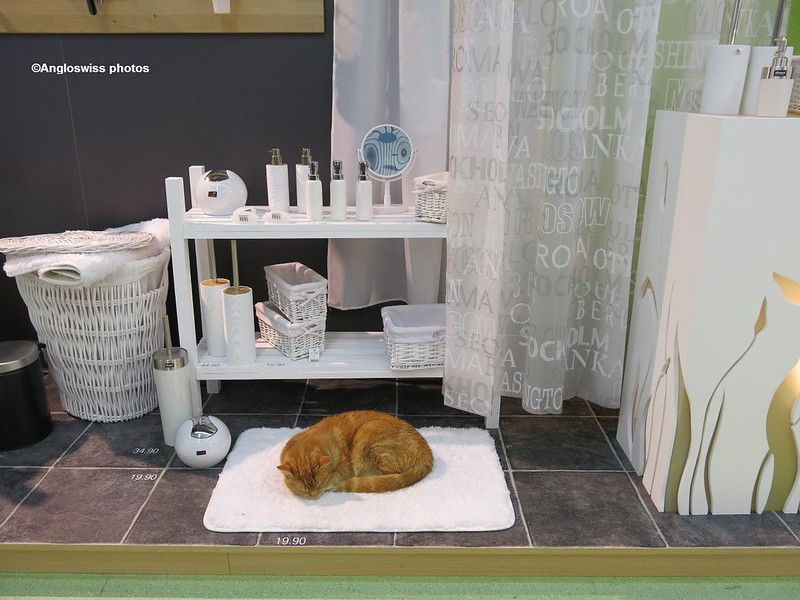 I always go to the same supermarket during the week, about 3-4 times. It is one of the big supermarkets perhaps a mini mall, as there are also other shops. One day we noticed there was often a cat walking through the supermarket. It would be found in the restuarant at the entrance and naturally was spoilt by the customers. That is typical cat, they know where the food is.

This cat was also on the parking lot having a walk around and I was worried that it could be involved in an accident. It never was. The supermarket was its home, but never in the food department which was on the upper floor. The assistants told me that was a no go with animals, but there was always a restaurant. Not that it was worried about stairs.To get to the bath fittings department it had to go down in the basement, but no problem. The bathroom department had the most comfortable place to sleep on the exhibition goods.

One day this cat, and its brother/sister (yes, there were two) got into the local newspaper. They had a home and were fed by their humans and well looked after, but this home was in a house bordering on the supermarket and cats being cats they soon discovered where the best places were. 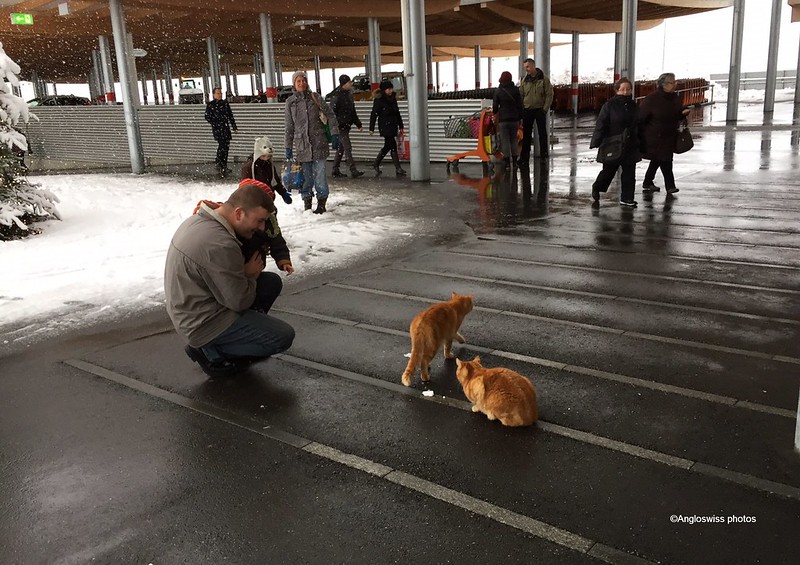 And here are both of them on outside the supermarket. One day they disappeared and it also got a mention in the newspaper that they now had a new home in another part of Switzerland, so the days of plenty in the supermarket were over. I think the regular customers all missed their presence. 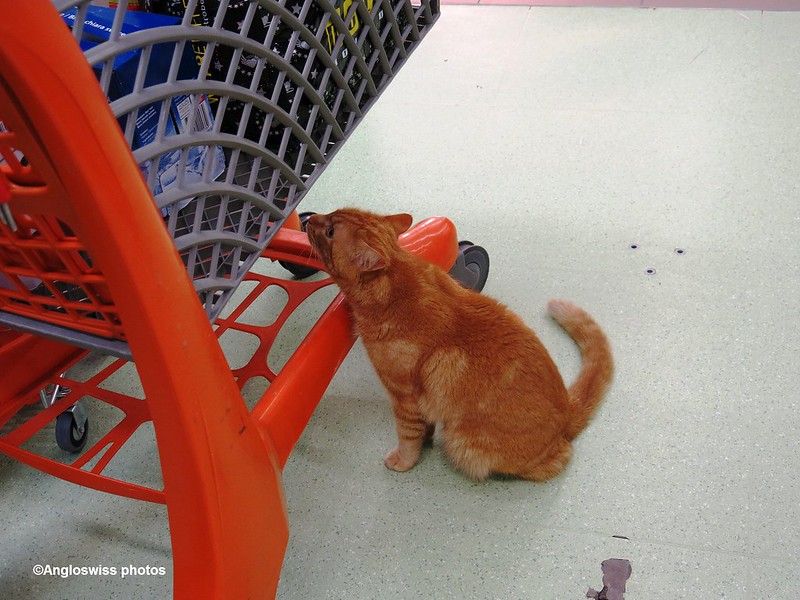 Just a few words on cats, but strictly from my point of view. I am no expert, but have had cats since many years. I also have a son, he is autistic. For me cats are autistic. They have no feeling for the abstract, only what they see is there.  If they are hungry they will eat, thirsty they will drink. And if they want to sit on your lap they will, perhaps they do not want to. They prefer to do their own thing when sleeping. If they want to go out they persist until the door is open, but it can be that the cat decided not to go anywhere.

My cat is now resting outside in the shade of a tree. Yesterday she did the same thing, although she changed the tree and place at least three times in an hour. Now and again you have kittens, but very rarely do you know who the father is, or fathers, according to the mother’s mood. Our Tabby was in a litter of four cats, and neither resembled the other. Romance and such feelings does not play a big part in the life of the domestic cat. 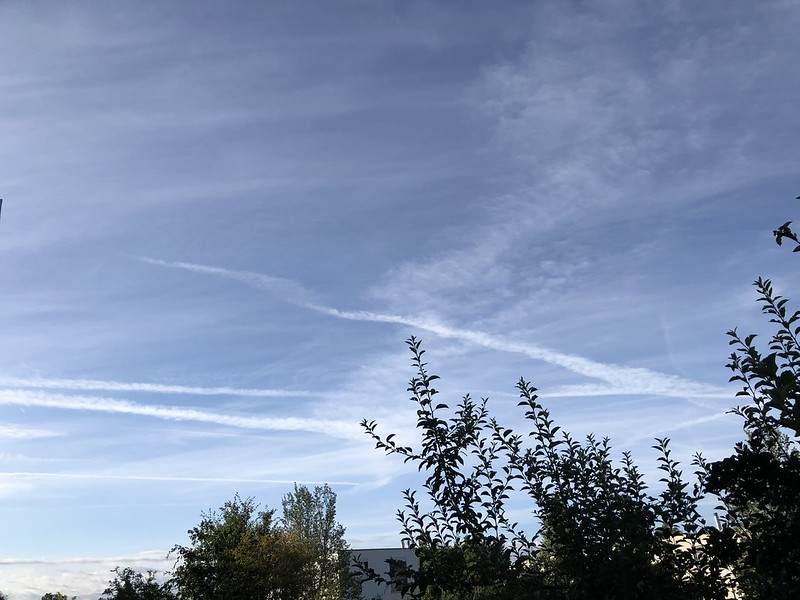 And it looks like another good weather day today. Not to hot, just right. Since I changed my modus operandi to using my Apple computer in the morning I now make myself comfortable on the porch to make the most of the remaining summer days and perhaps some Autumn mornings. In the distance I can hear a few cars moving along the road and some sort of dove calling.

I decided to take a wheelie in my chair yesterday afternoon to town. I had been homebound long enough due to the heat we were subjected to and now I can breathe again.The circus has left, but there is still a mini circus around, the one with the hog. 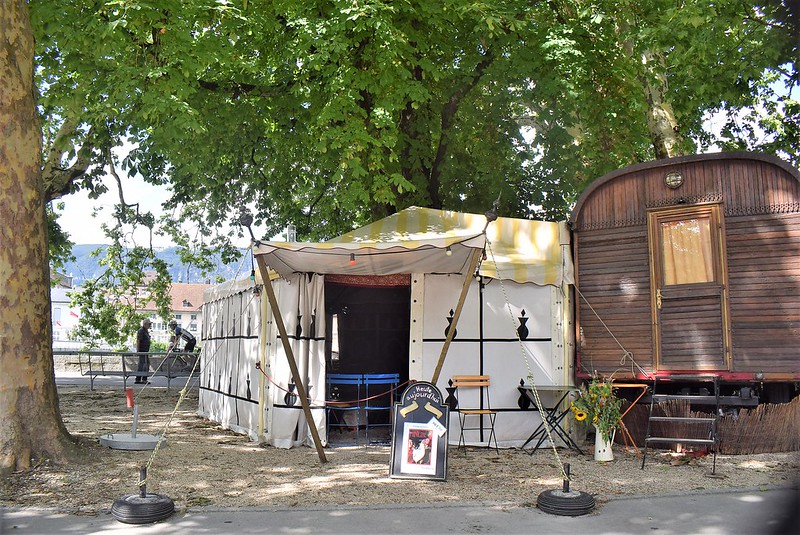 I showed his photo a couple of days ago in one of my good morning blogs. Now I realised what it is all about. It seems it is a smaller nostalgic circus with wooden caravans and a small tent with one show per day, They seem to have more “domestic” animals and now they have a sign warning not to feed the animals, they can get aggressive.  The hog has a long pointed tooth or tusk that you can see protruding from the mounth and I certainly would not want to get too near. 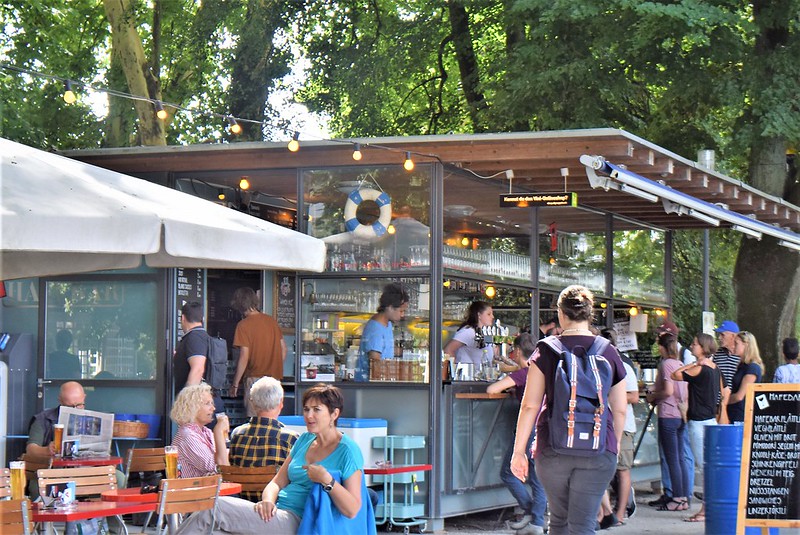 I also wheeled past our well-known “Hafenbar” on the River Bank in town. This arrived a few years ago thanks to the enterprising idea of some locals in our town of Solothurn and has become a great success. It is only in the warmer months of the year and in Winter it disappears, but is very popular, although last week it got too popular. The owner had a rude awakening in the morning when he was called by the police with the news that someone had broken into the bar during the early morning hours.

The had smashed a window, and took the time to drink a bottle of gin and vodka and eat some snacks. They also took a few bottles with them. The main damage was that they had stolen the iPad used by the owner to programme the music they had in the bar. They took no money as there was none there. That is put away safely when the bar closes. It was a cowardly act and shows again how thoughtless some can be. The bar people already had to warn people of pickpockets when they take a drink there The bar has become quite an instution. 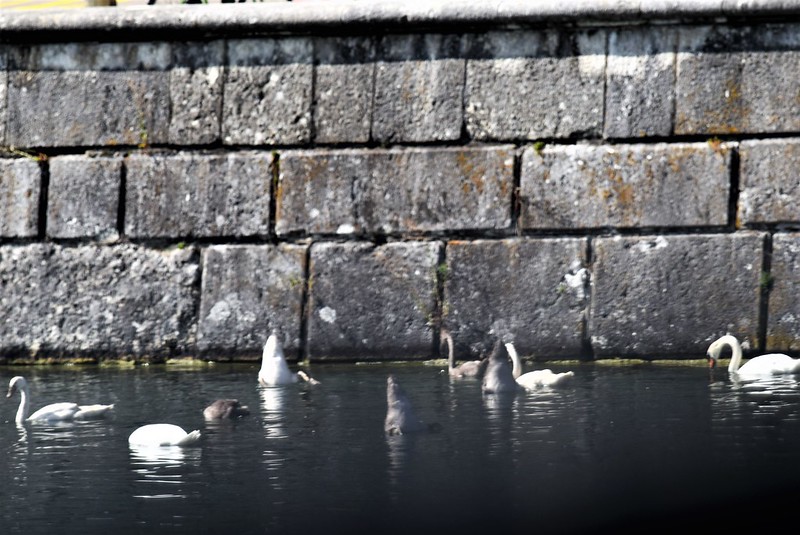 As I wheeled along I notice quite a congregation on the other side of the river. A swan family were swimming on the edge of the river. The parents and their 7 cygnets, which are no longer cygnets, born this year in Spring. I got the best shots from the foot bridge over the river Aare. Today there was an article in the daily newspaper about the swan family with a photo. They have become quite an attraction to the local population and tourists. The youngsters still have some brown feathers, athough two of them are white. They are vegetarian and mostly dip into the river to eat the plants growing near the surface. You are not allowed to feed them however, which could do more harm than good apparently.  They were quite an amusing mixture floating and dipping. A real picture of swan family life. Every year we have a swan family somewhere on the river.

It was now time to wheel back home, although I was enjoying my trip. We had already got the week-end food supplies from the supermarket in the morning and No. 1 son was in Zürich for the day. Today who knows what will happen, but I will be on my way again this afternoon, with the camera of course.

Enjoy the week-end and may the weather be with you and the fun. If it is raining that also has its good side. We spent a month without and my lawn was not very happy. I will leave you with yet another view of our local town of Solothurn and the River Aare which runs though it. The clouds also put on a show for me yesterday afternoon. 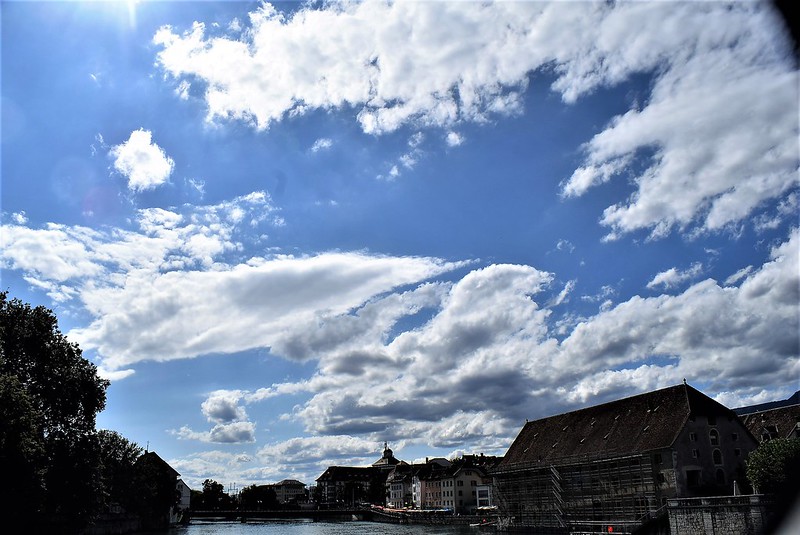