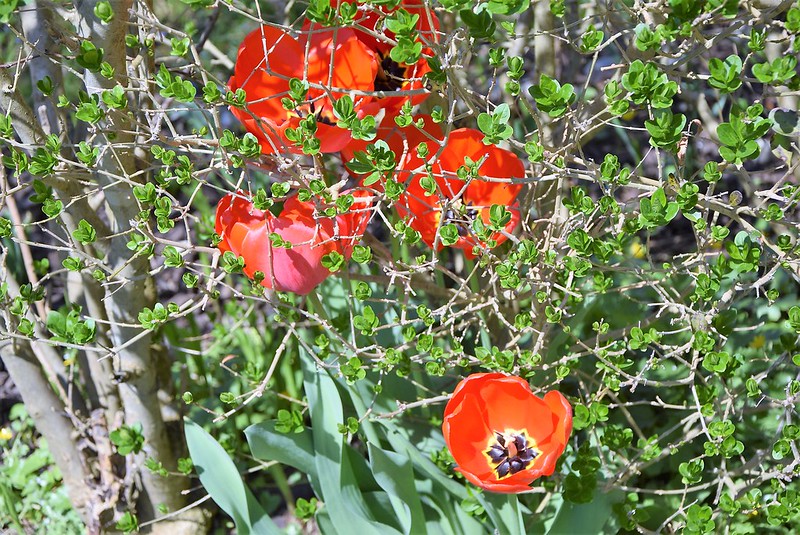 A return to tulips trying to hide 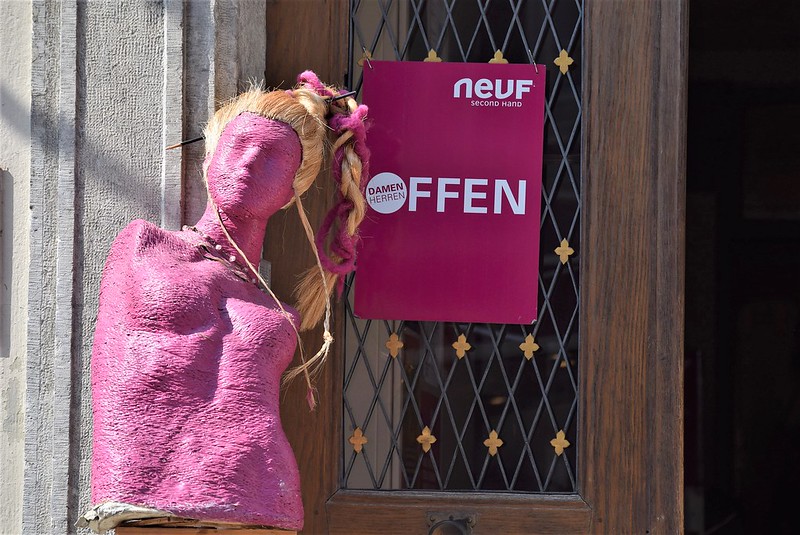 Let’s play a game, but which one should it be?
I used to play with dolls, my friend was a teddy bear
I dressed them and combed their hair and even gave them a wash
And then the games were finished, I had a new playground
It was called school, but my friends were real.  of flesh and blood
We would chase each other in the playground to see who could be caught
And the boys, did you ever play “kiss-chase”? But you did not catch them all
and sometimes you did not want to
School days were over and the earnest side of life began
It was still a game, but you were the prize
You had to find the right answers and solutions and you were paid for it
This was a great game, but only if you could solve the problems
It was no longer a “kiss-chase” but a rat race
There was also another game, more than just a kiss-chase
And if you won you could take the trophy home with you, or the trophy took you home
Play got a new meaning, it was no longer just a game
In your childhood days the washing, cooking and dressing was just a doll’s game
Now you were the doll and the fun became the earnest of life
You might even have your own living dolls, who were playing with their dolls
But you now had to dress your dolls and feed them and wash them, no longer a game to play, but reality
Your real dolls went to school, went to work, found their partner dolls
And you were now finished with playing games, you watched the others as they played
Perhaps one day you became the doll and were combed and washed and dressed 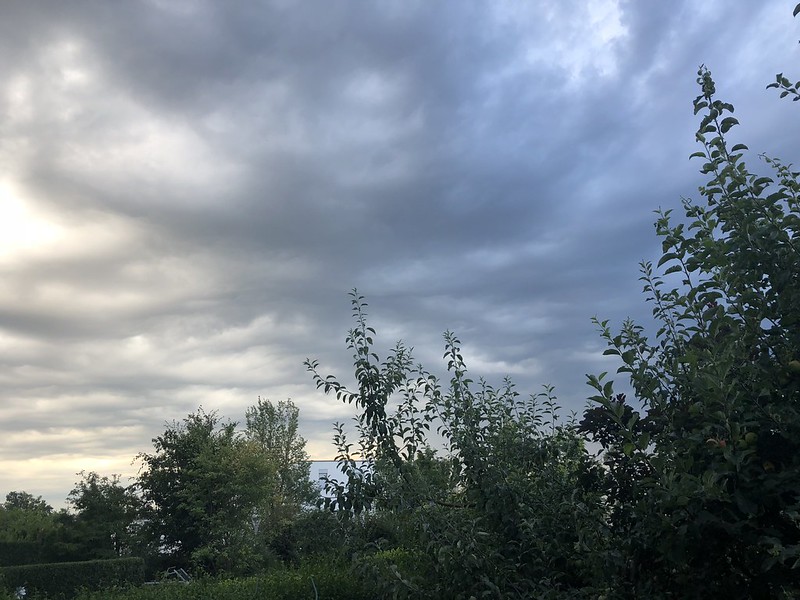 Today we have stormy skies and I hear a very distant rumble. Does this mean a break in our hot airless weather. I do not think so, but every little cooling breeze is welcome. It is now raining, just a few drops, an apology for a shower. I hope I am back in the old routine with no unexpected accident, my ear is now thread free, although it looks a little different to the other ear. 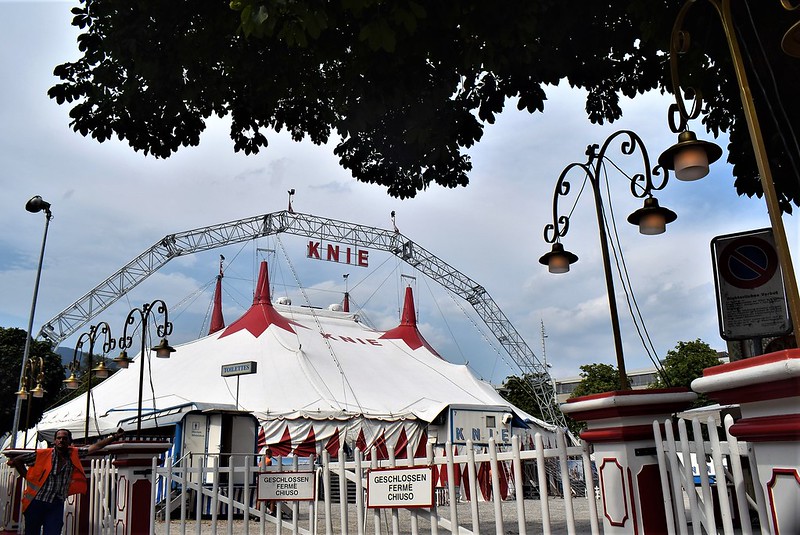 An now the circus is in town. I am not really a circus fan, but those that enjoy clowns and all the trimmings, why not. I noticed on our journey to the supermarket yesterday moring that the reserved area was being prepared and the tent was being constructed. Just a quick explanation. Circus Knie is an established family circus for many years in Switzerland, now in the third or fourth generation and it continues from father to son, now daughters, and the family is well known here. They have their Winter quarters on a land tongue on the Lake of Zürich and otherwise during the Spring to Autumn they tour the towns of Switzerland.

I decided this would be a photographic oppotunity and made my way into town yesterday afternoon. When they arrive they take over. The tent and the zoo with their various animals are in one place and the caravans belonging to the artists and workers also need quite a lot of space. 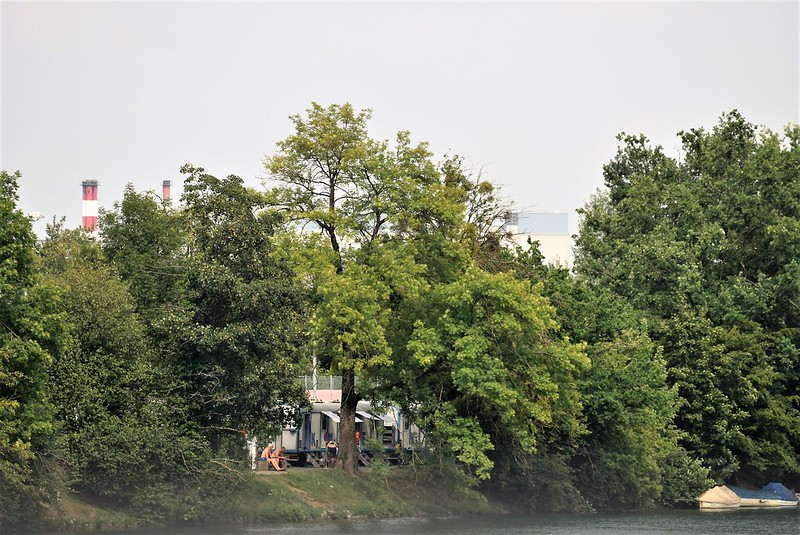 They have been given a large space on the banks of the river Aare for the people emloyed by the cicus. They recruit the workers from villages in Morocco. That is also a tradition and the same families in the villages are employed during the summer months. This gives welcome work to the poorer areas of Morocco and the men a secure job. As I wheeled back in my wheelchair I notice the police had cordoned off my usual path, but I continued all the same although it was a narrow path along the river. 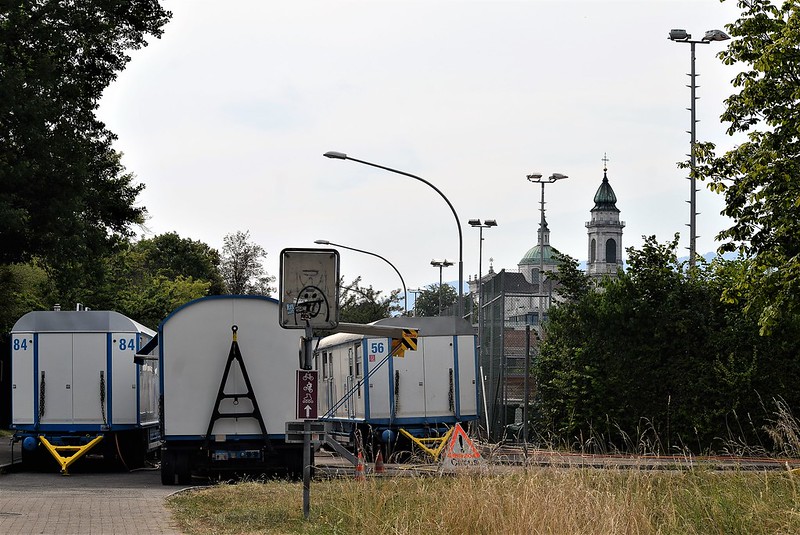 It was a mixture of closely packed caravans with the background of our town of Solothurn complete with cathedral. I really intended to take some photos of the animals, but as the circus had only just arrived the zoo was still closed. That is a separate part and you have to pay an admission fee to get up real close. I gladly pay for the privilege and will probably go again this afternoon to try my luck. 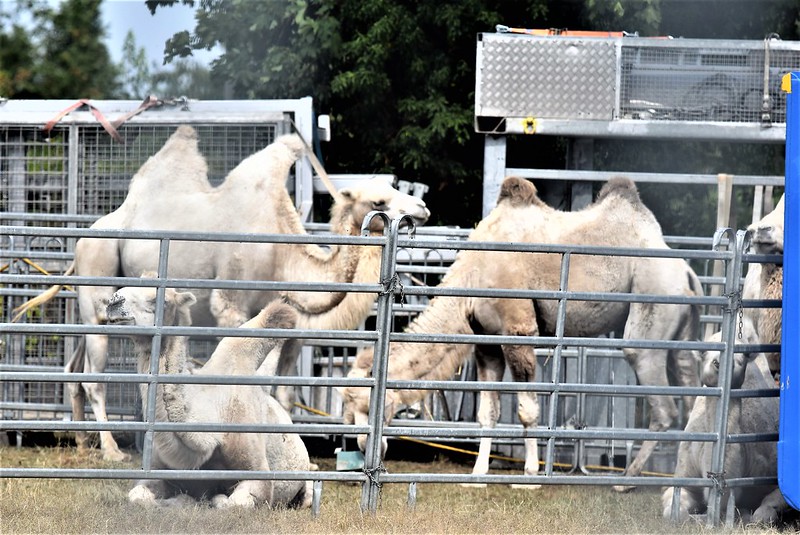 I caught a glimpse of these dromedaries with my zoom lens. It is not very often you see real camels in our little market town. 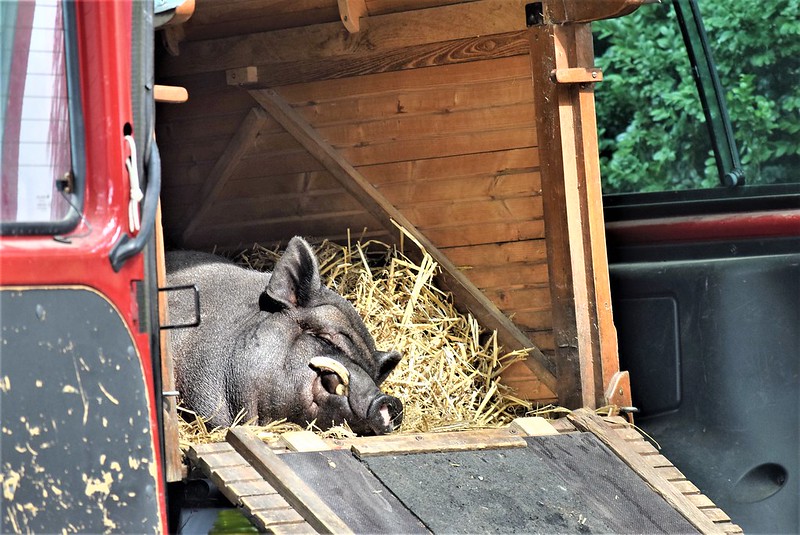 As I later wheeled on my way home I notice a few other animals were relaxing in their cars that had been converted to a stable. Mr. Swiss tells me this is a hog, a male pig, and you can see his long tooth. I am no expert, but it is really fun to take a photo of something you do not see every day. I saw no elefants, lions or tigers yesterday, but they have perhaps not yet arrived. They do have them in Circus Knie as I remember once that an elefant escaped in the town of Zürich. I am hoping to see more today.

My cleaning lady is now busy and I should follow her example instead of sitting at the computer. Mr. Swiss just made a surprise return visit as he had forgotten his purse and had no money for the shopping. Oh, the problems of us golden oldies.

See you later, after cleaning a few windows and cooking lunch. Keep safe and may the weather be with you. I will leave you with a curious circus circus llama. 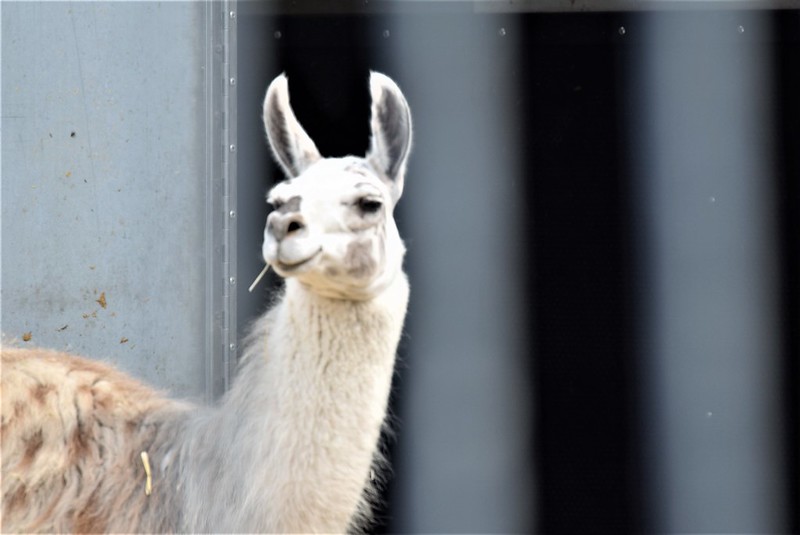