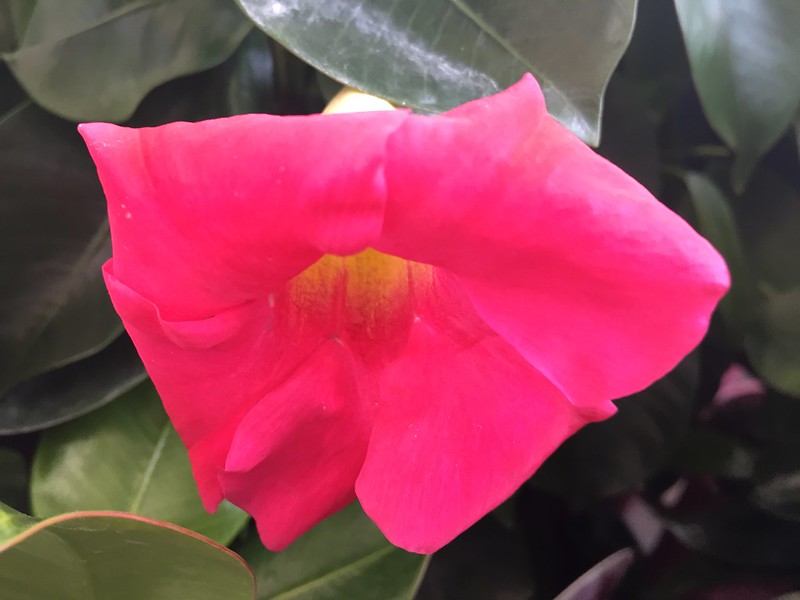 Something completely different. They are selling them in the store at the moment and they are a climbing plant in various colours according to what I have seen. 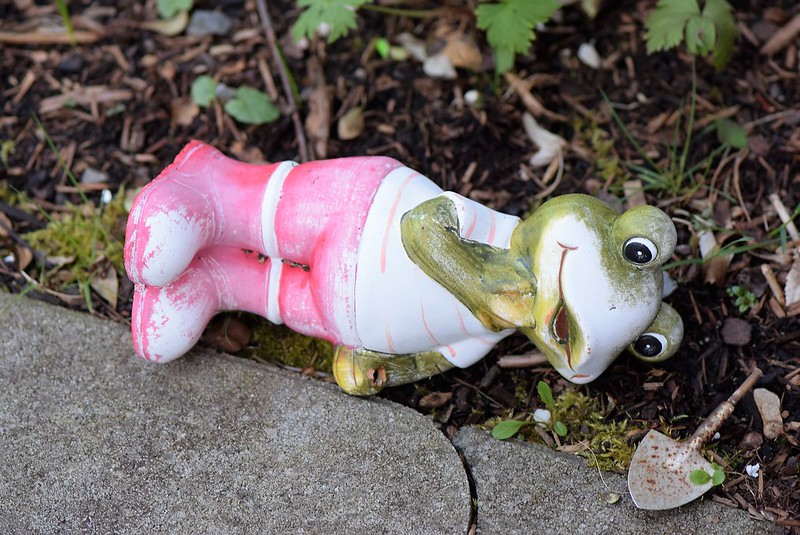 Death of a Frog, attacked with a shovel, he had no chance of survival. 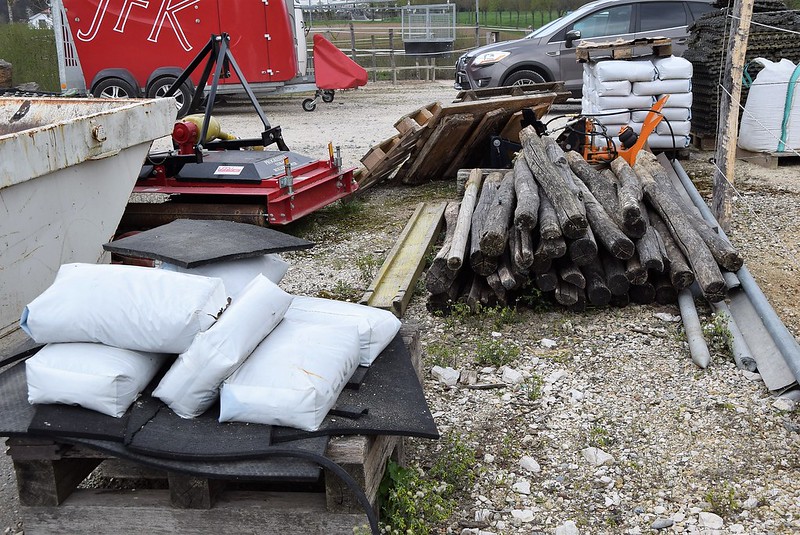 What did JFK have to do with this collection? 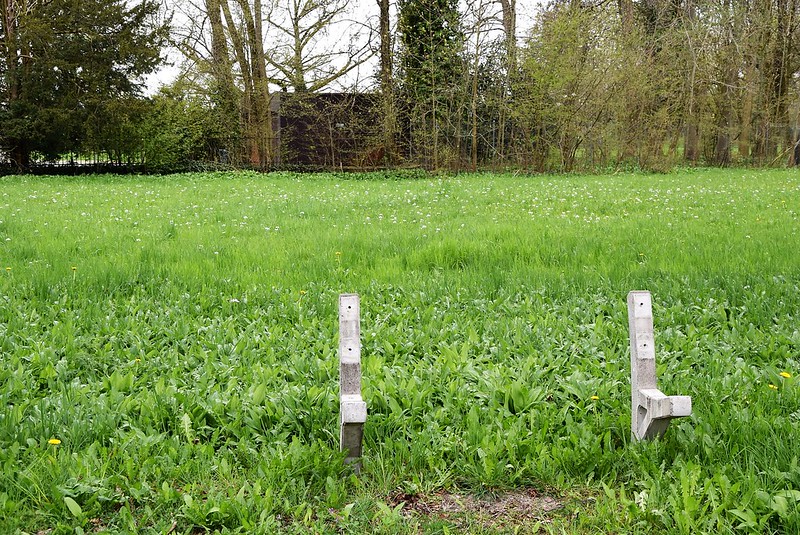 The police are alarmed, someone stole the bench. 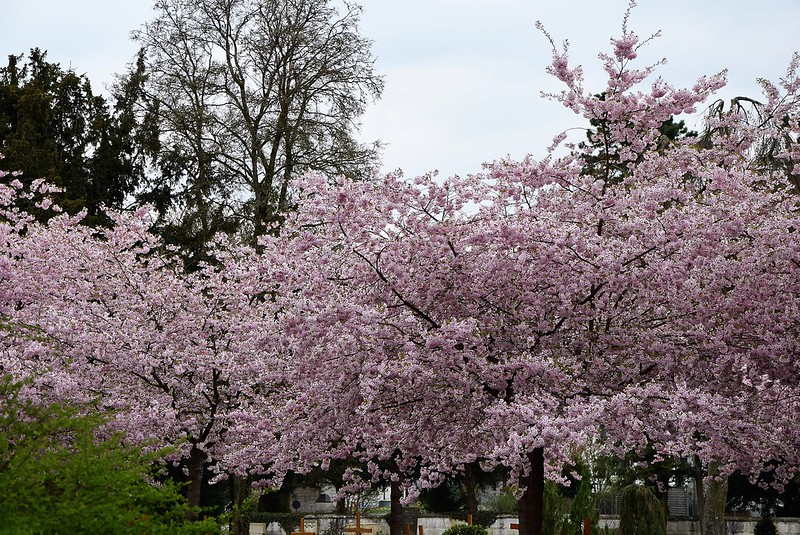 Not exactly an orchid, but I have never seen so many Japanese Cherry tress flowering together. I was in Switzerland at the local cemetery today, but it could have been Tokyo as for all I knew with these trees. It was really breathtaking. 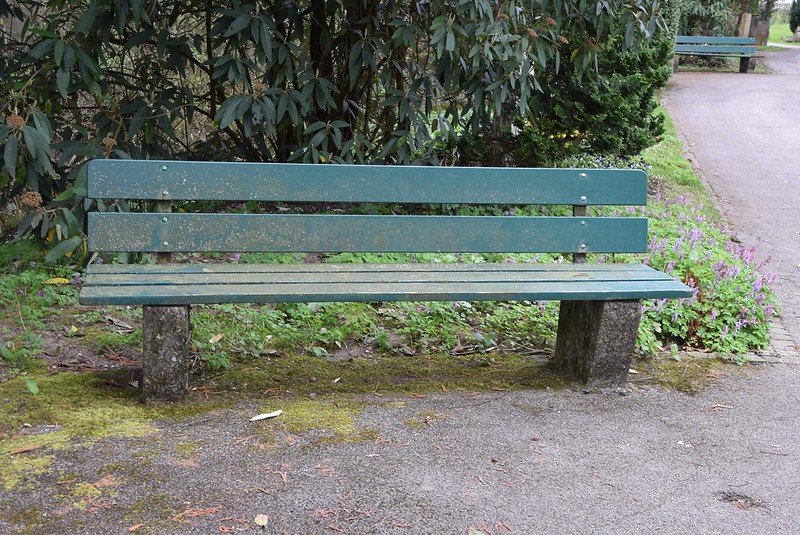 How is that for a  bench, found at the local cemetery? It seems to be gathering some moss and perhaps needs a wash, but I sat on it all the same for a pause in the cemetery tourism.

Pause has become the story of my life. I manage a walk, with a cane, but half an hour is the limit so my walks take place in strategic places where benches can be found. In the meanwhile I know the position of every bench in my village. This afternoon I decided to take a walk with a pause in mind, taking photos of the benches on the way. The cemetery is made for people like me that like to sit now and again, and enjoy the view with a camera. It is full of benches. 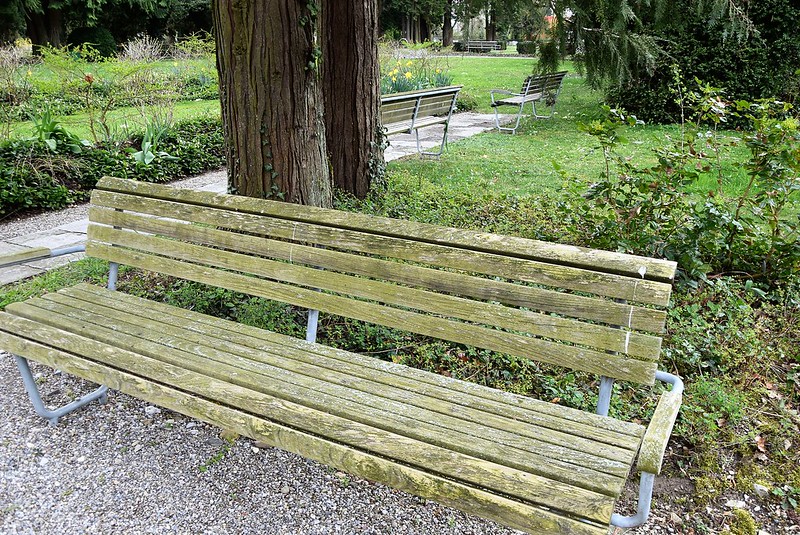 Now just look at this, three benches all together and another one in the distance, a real bench festival.  It was Sunday afternoon and I really expected a crowd at the cemetery, but I was on my own. There were a few people taking walks, but no-one really visiting those that are no longer there. I was glad otherwise there might have been a queue waiting to make a pause on a bench. The benches are not always so comfortable. 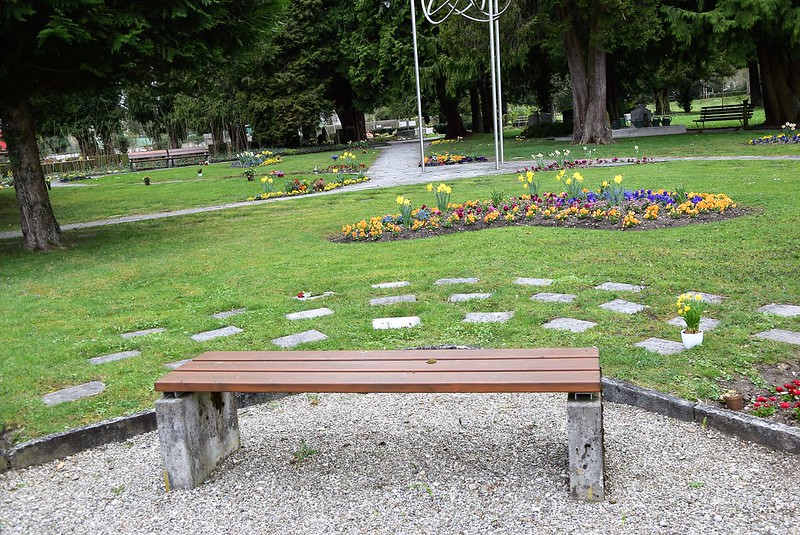 This one is not my sort of bench. There is no support for the back. Just imagine you are feeling tired, take a pause on the bench and lean back. There you have the catastrophe, your fall backwards off the bench. They probably ran out of money at the cemetery when this bench was organised. On the other hand, perhaps they did not want to spoil the view of the flowerbed in the background. The stones you can see are those used for cremations. A jar of ashes does not take up so much room and does not need a complete king sized grave. 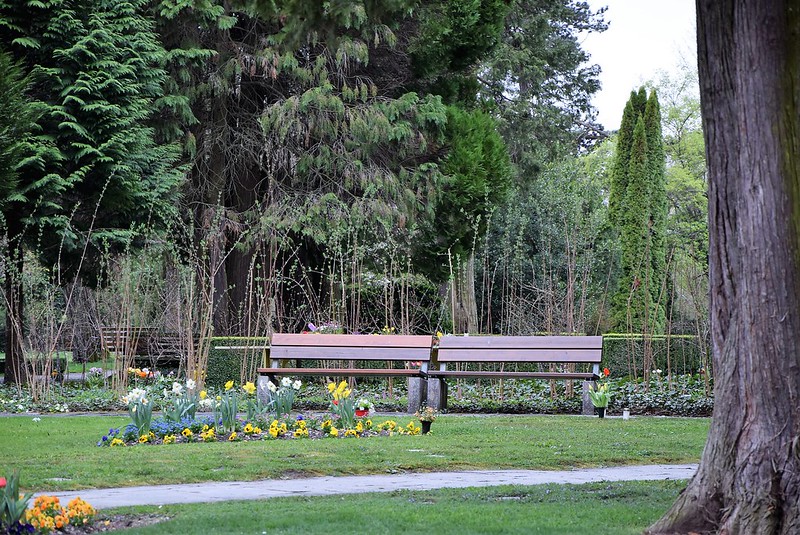 These would win the bench competition for me. You can relax, even lay horizontally for a sleep if you are tired, and have a flowerbed to admire into the bargain. Here again you can see stones fitted into the lawn for those that had the cremations.

I depend on these benches for a rest on my walks. Just 5-10 minutes and I am recovered enough to carry on futher. The cemetery is not far from where I live but I have to walk back home at the side of the main road. Even there I can take a pause. The local railway runs at the side of the road and there is a sheltered station near the exit to the cemetery complete with seating. Today I was a little out of luck, as there were people waiting for the next train, but I managed to squeeze myself onto the remaining free place on the bench. I arrived home with a camera full of photos and a little worn out. However, sitting at the computer is also very relaxing to write my blog.

And here is a view from a bench I was sitting on before returning home. 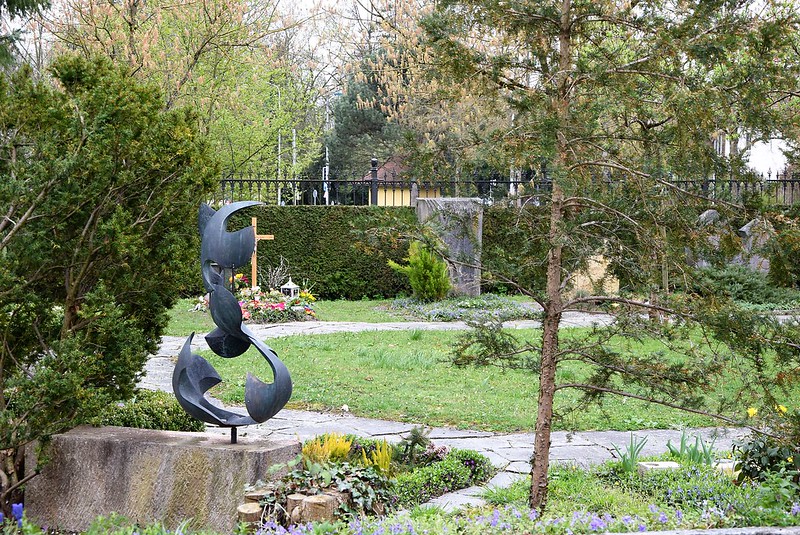 Daily Prompt: A Pause in Time is the story of my life 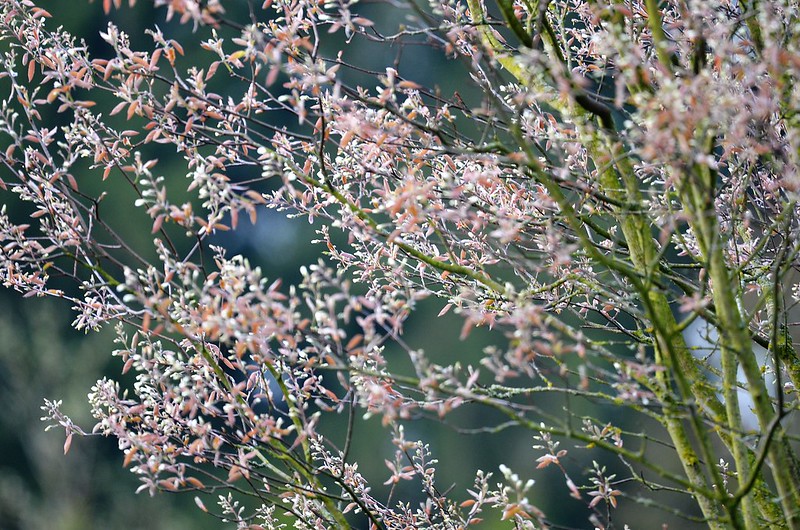 =”
I did not go anywhere yesterday, so just took a few photos from the garden. It is wonderful to see the bushes producing their shoots and flowers at the moment. This is a so-called amalanchier with the latin name, but the english name has many alternatives. I actually only knew the german name “Felsenbirne” which direct translated would be “rock pear”, but you can see yourself if you follow the link.

We also have a hawthorn opposite our garden which is now flowering. 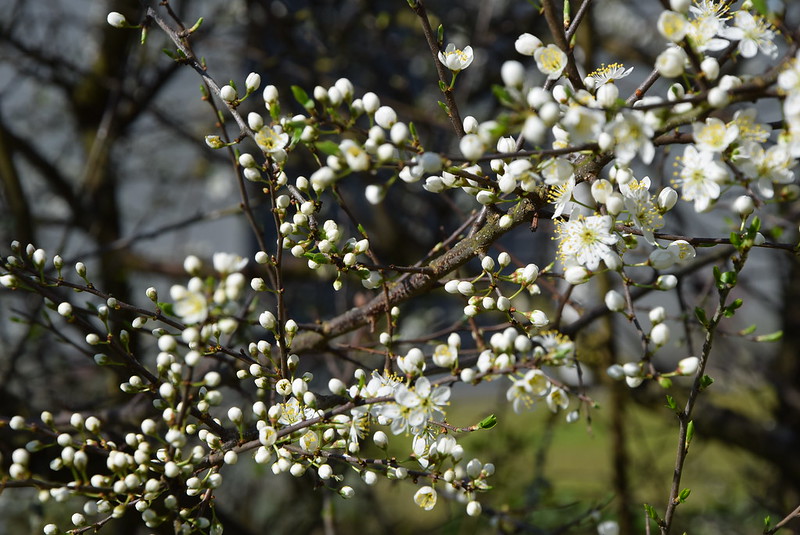 I have a memory of the hawthorn from a couple of years ago when the estate gardeners were commissioned to prune down the  bushes. Pruning for me is thinning out, but the gardeners were more an execution commando, and before he chopped it completely down to less than half size I was out with guns blazing to ask what he thought he was doing and reminded him that the bushes between our block and the next were not just bushes but a protection of our private sphere. They got the message and stopped. I also wared them not to touch the wild pear, as that would once day grow to 4-5 meters which would be ideal. Since then I have not seen a gardener touch the trees in between.

I have my own gardener for my little piece of land, as Mr. Swiss and I are now golden oldies and cannot bend as well as we could. I have very nice gardeners, they know what I want, and listen to what I say and I am not treated as a complete gardening idiot. Based on various discussions with gardeners, I have discovered that plants and growing things are just a means of work and they do not have feelings. If it is wilting, pull it out and replace it is their philosophy. Mine is nurture it, look after it, keep an eye on it and suddently it may recover. Gardeners would rather give it the last death push to the compost heap. Next week the gardeners will arrive to remove our hedges for the construction work. That does not bother me, who needs hedges. You have to have them cut and trimmed and looked after. As far as I am concerned they can burn my hedges. It is not the hedges  but what is growing in front of the hedges and I am sure it will not bother them to demolish my tulips, which have been growing in the same place for many years. 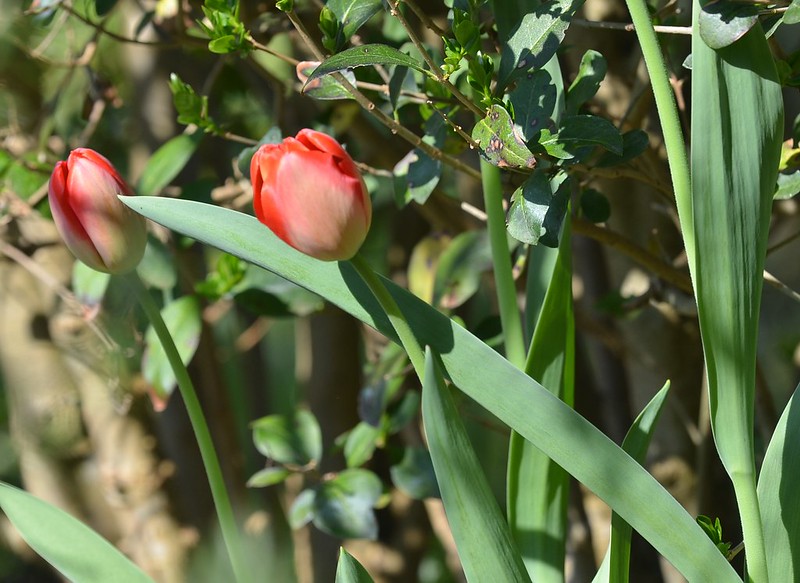 They are Darwin tulips and now in bud. I dare not to think how they will be harmed by a thoughtless gardener who finds you can always replace them. Of course you can, but you cannot replace the ten years they have spent in the ground blossoming regularly every year.

And now for a peaceful, relaxing Sunday I hope. I plan on a camera walk this afternoon, but am not sure where. I might take a trip to the cemetery and see if there is any action, although generally cemeteries are not such action places, more for a quiet relaxing rest on a bench.

And now to the work: a little bit of tidying, some cooking and in between the delight of discovering the ironing board, but no problem, I have everything under control.

Have a nice Sunday everyone, enjoy the day. 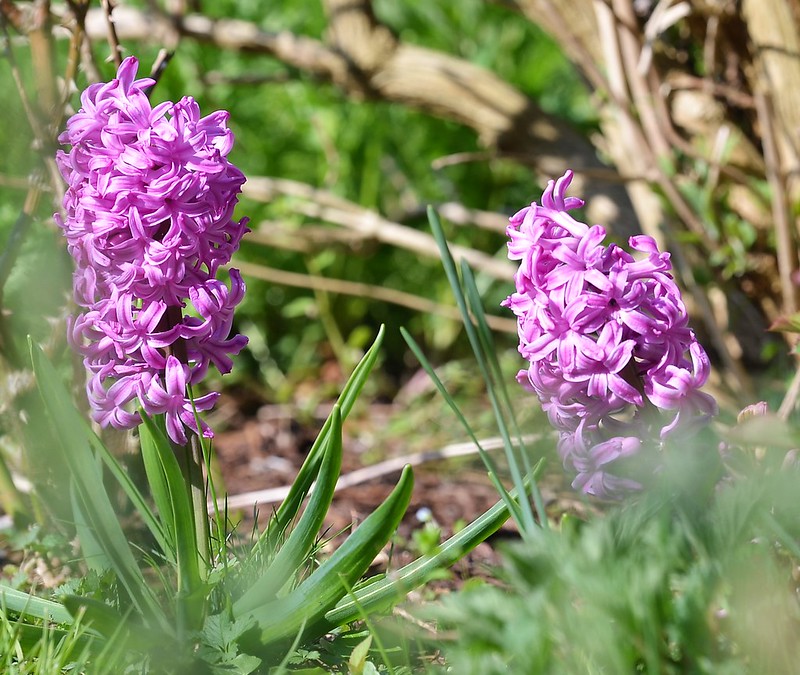