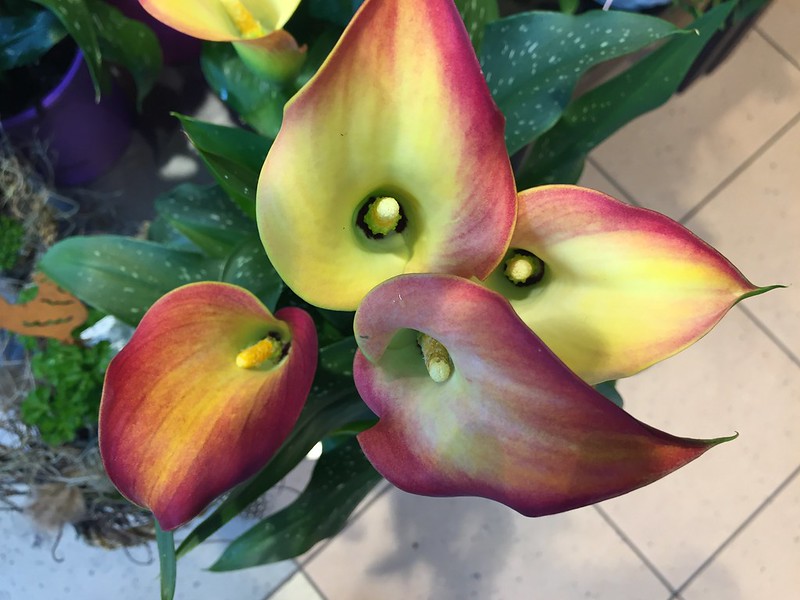 And another colourful one 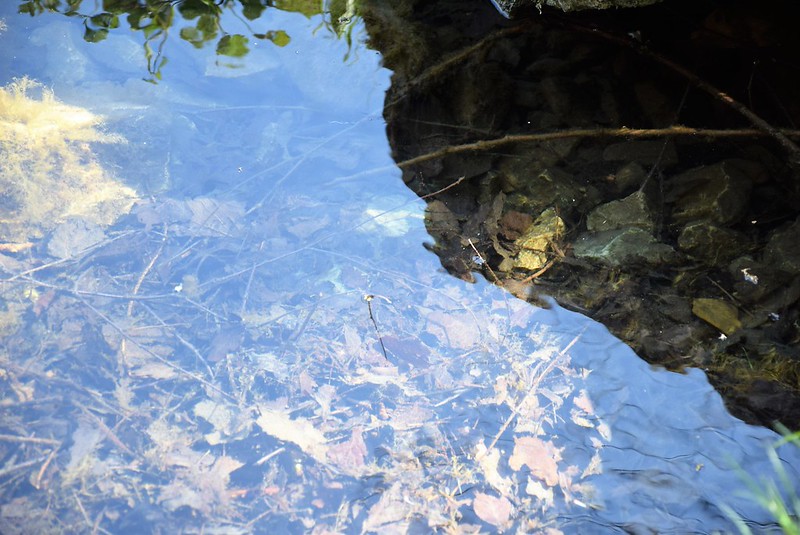 The fallen Autumn leaves in the side stream of the River. 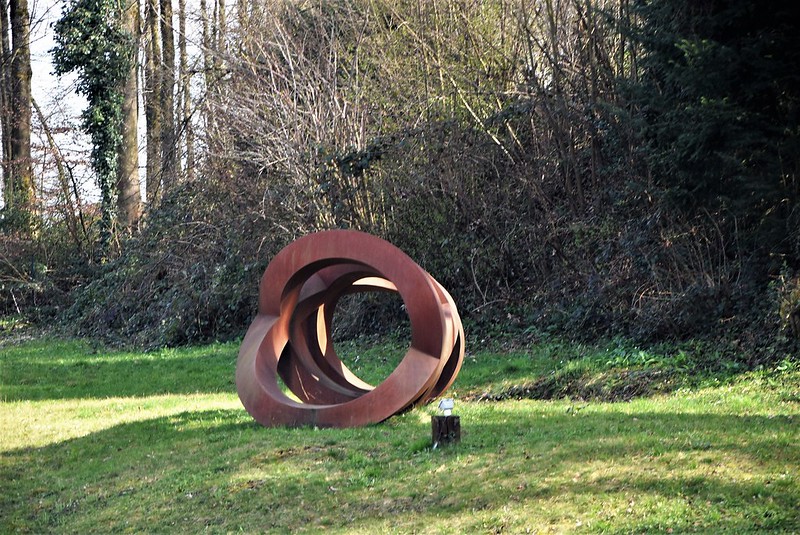 Seen in an industrial area. 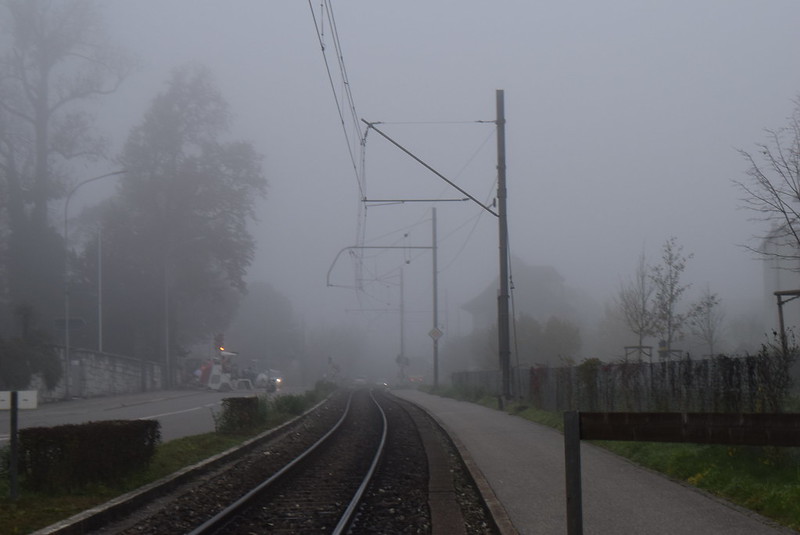 Autumn mist over the local railway 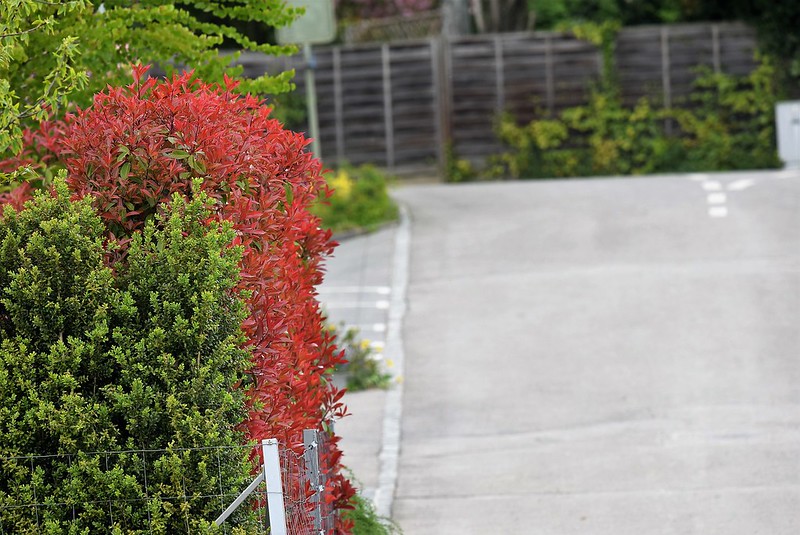 Yesterday on my walk I saw this bush peeping through a hedge and so I took a photo. I asked myself why take a photo – nothing special, but it was special. Today it is special for me because it is my maroon of the day, well almost, perhaps not quite, but yes, it suits. 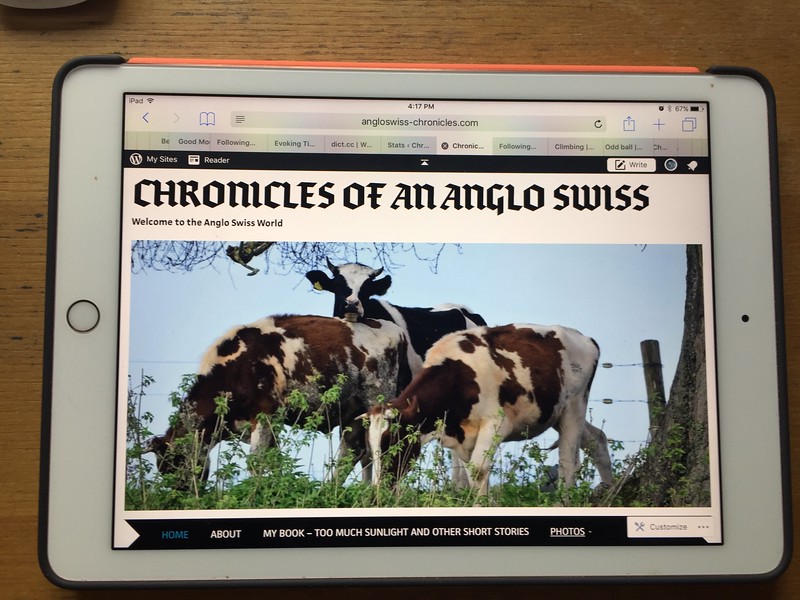 This is my iPad. I love my iPad because it means I do not have to sit at a table or desk permanenty when I want to do something quickly on the computer. OK, my Apple computer is also very useful as I do not need permanent electricity. It tanks up enough for 10 hours usage without a cable attached to the mains. The Microsoft only lives for an hour, perhaps 2, when it tells me “hunger, give me electric food”, meaning it stays where it is until I need it. I can sit in  chair with my Apple computer, but even better my iPad rests in my hands and is he is not heavy, he is my online brother.

Today I had a problem, a big problem. As said this iPad is my means of communication when I wake up in the morning and remain in bed, also after my golden oldie lunchtime sleep. “Let’s see what has been happening in the online world while I was sleeping” and I also have the oppotunity to acknowledge various likes and comments, what could be better.

Today, in my oblivious waking time of midday golden oldie sleep, I took my iPad in my hands and did something that I should not have done, and I still do not know what I did. Suddenly my screen was divided into two pictures. On the lefthand side my WordPress site an on the righthand side my Blogger site, which I only use for a Photo challenge once a week (a remainder of my Multiply days). I would add this is my new iPad, the one with the highest capacity for uploading apps (256 GB) and it is perfect for my needs.

No problem, I am a geek, a computer person, there must be instructions somewhere to cure this split screen and I found them. There were many instructions, mainly  because of others that had been confronted by this new development. You know we are always getting updates to improve everything or not. It seems one of these updates was to allow a split screen, so that you can observe two different web sites at the same time on your iPad. I would add, this is only possible in landscape modus (don’t ask, I had also never heard of it before – it just means for those not knowing, holding the iPad horizontally instead of vertically).

To continue – what do you do. You visit Internet for the solution. Again many roads lead to Cyberland and after a frustrating half an hour I still did not have the  answer. Mr. Swiss to the rescue and after a further half an hour we were in the same situation. We discovered that you can switch this new application off in the settings in the mutitasking section, but when you have the split screen it remains until you get rid of it. But where there is a Mr. Swiss there is a way, and after further examination I heard the words “Eureka” – not quite, becaue he cannot speak Greek, but I am sure the various profanities he uttered helped. He found the answer. You have to give your iPad screen  a swipe. I also saw this myself in the instructions, but I proably did not swipe in the right way. Him, being a male of the species, swiped in the right way (3 or 4 swipes he said) and the second screen disappeared. My iPad is now working again. To avoid this oblique situation re-occurring (did you see it, I used the word because it is the daily prompt) I have now switched this new update off in the settings of my iPad and it will never, ever, happen again.

Mr. Swiss did ask why I had so many apps open on my iPad – another small difference of opinion? Who needs  a split screen in any case. I have only one brain in one piece, it does not split. 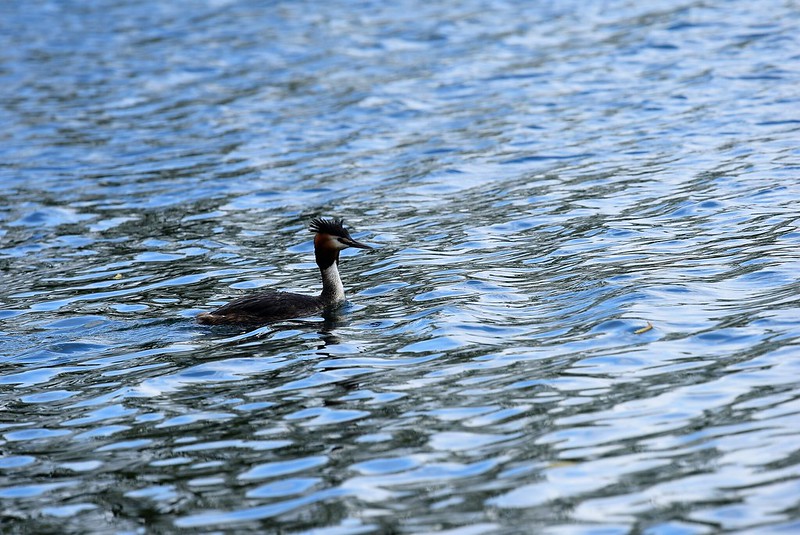 First of all: question of the day. Can anyone out there tell me what sort of duck this is. I was sitting on my favourite bench next to the river yesterday waiting for something to happen for my camera. It was not a warm day, although I was dressed warmly enough. I had the zoom lens on the camera, ready for anything. The swans always congregate on the opposite side of the river, but there were no swans, not even a mallard duck. They were probably all nesting somewhere. It is that time of the year.

And then I saw this one. He was approaching and I was ready for the photo(s). He then took a dive in the river and appeared about a minute later. He repeated this process until he had reached my bench level, so I took my photos – about 10 of them. I had never seen a duck like this before with the mohican hair cut, Probably nothing special, but it was for me.

There were very few people taking walks along the river yesterday, more cyclists and joggers, but I did not mind. I had wrote a short blog and was thinking about it and then decided to go. I had not been out with the camera for a few days, and decided it was time. I was seeping into a sort of Easter lethargy, and just laying around at home. 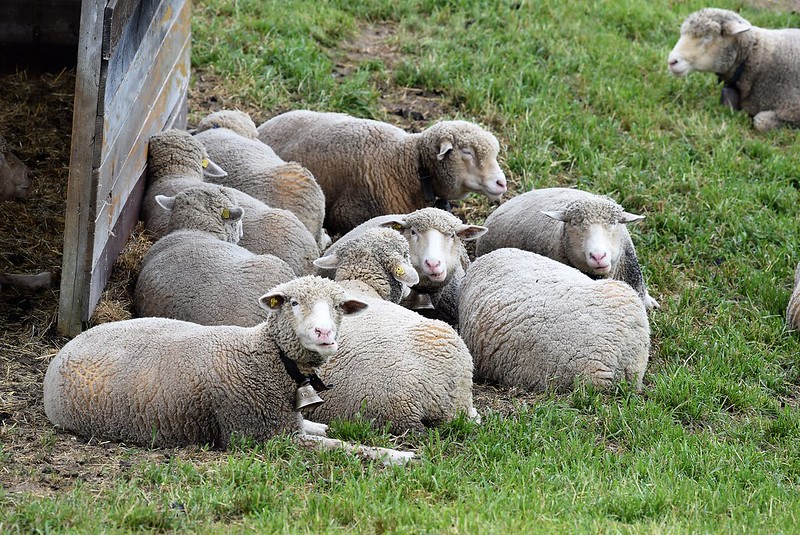 I mounted the steps to the top of the river bank and looked to see if there were any sheep around. The last time I saw them they were all cuddled together in their shed. This time they had advanced to the outside, but were still cuddled together. I suppose when their coats have been removed they feel the cold more and like to keep together for warmth. The chief sheep, the one with the bell around its neck, looked up as I stood there with the camera and some of the others joined in. They realised I had the zoom lens, so did not have to get nearer. They were the lucky sheep, the ones that did not have to play easter lamb. I think the farmer only has them as a hobby. Switzerland is not really sheep country, although there are a few herds roaming in the mountains I believe. 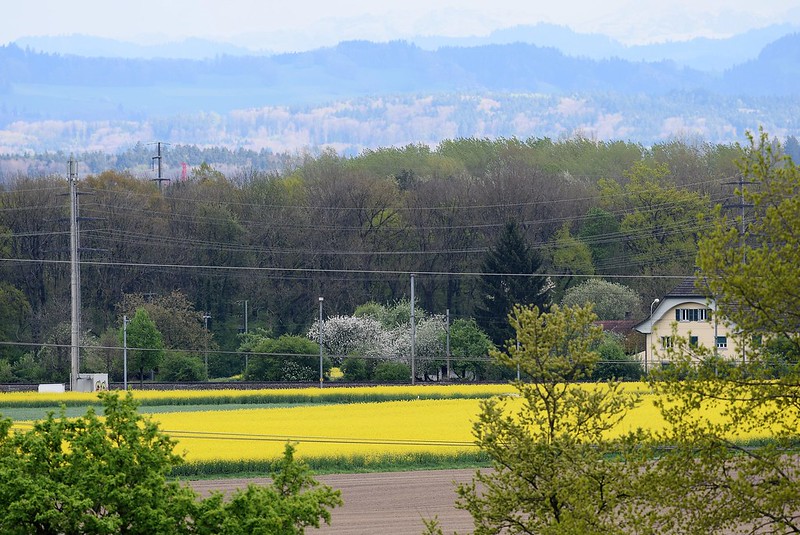 When I reached the top of the bank, after climbing the 69 steps, I took a rest on the bench at the top. Yes, I know where all my benches are. This photo was a view to the other side of the river and I noticed that already the rapeseed was flowering. Spring hits you quickly. It all starts with a forsythia bush and suddenly you have crops.

I decided it was time to wind my way home and to be quite honest my dinner of boiled bacon was playing up on me. When I arrived home I was not feeling so good, but after taking tablets, three of them within 4 hours, things calmed down. I decided to leave an evening meal not wanting to confuse my digestive system more. Everything eventually settled down and I must say I had a good nights rest.

My photo programme, Flickr, was also playing up again yesterday, but after consulting the forum site, I realised it was playing up all over the world with the complaints that people could not upload their photos and constantly getting “time out” reports. It is not the first time this has happened and I really thing they should get their act together at last, as I really wanted these photos online. In the meanwhile I saved them all on my two external disks. This morning I had a quick look and saw that everything was functioning normally again, so quickly uploaded the photos on the Flickr site and my computer.

This morning the bulders were programmed for their arrival, but are not yet here. I am not sorry. It is full of suspense, something like waiting for Godot, so we hope they arrive eventually.

Mr. Swiss has to see his doc this morning and there are one or two things to get in the supermarket. I will be almost back to normal with my programme. See you around later when I am more awake and ready to go. At least the sun is shining.