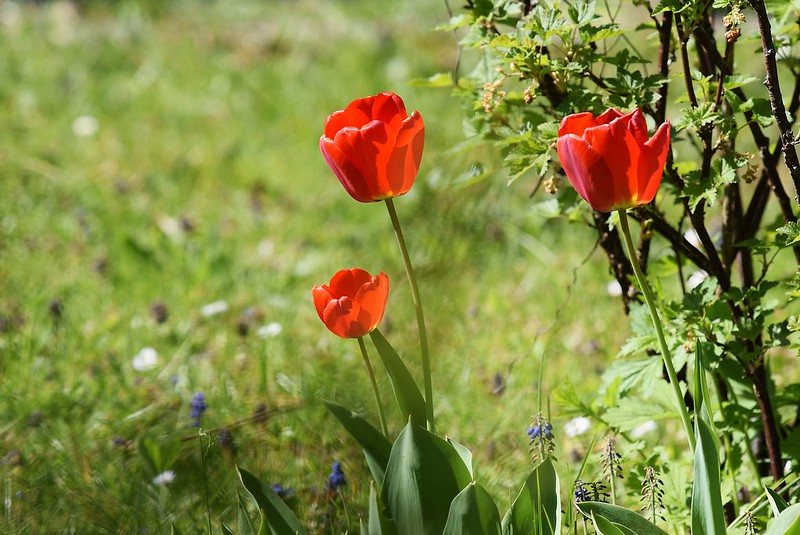 Seen in a garden on a walk 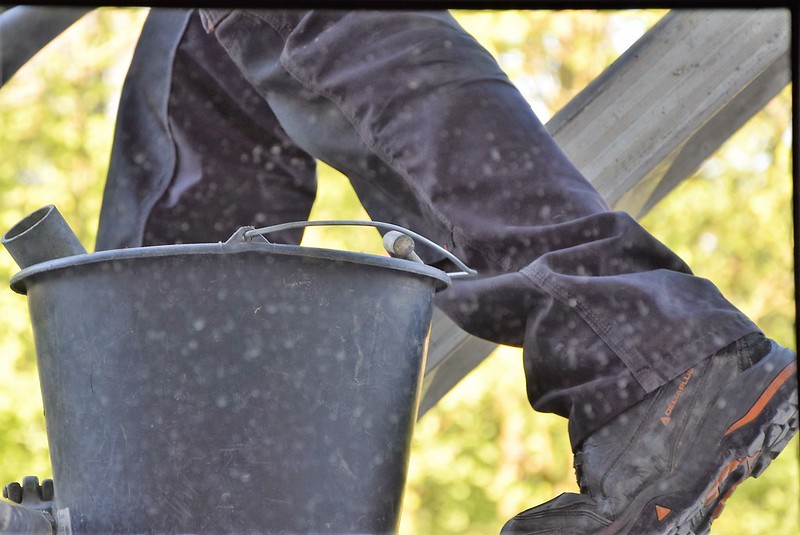 I am getting odd balls everywhere at the moment. When the building where you live on the ground floor is being renovated, there are all sorts of strange things happening for the camera. Here the worker was taking a step on a platform in front of the window where I was blogging. I could not resist. 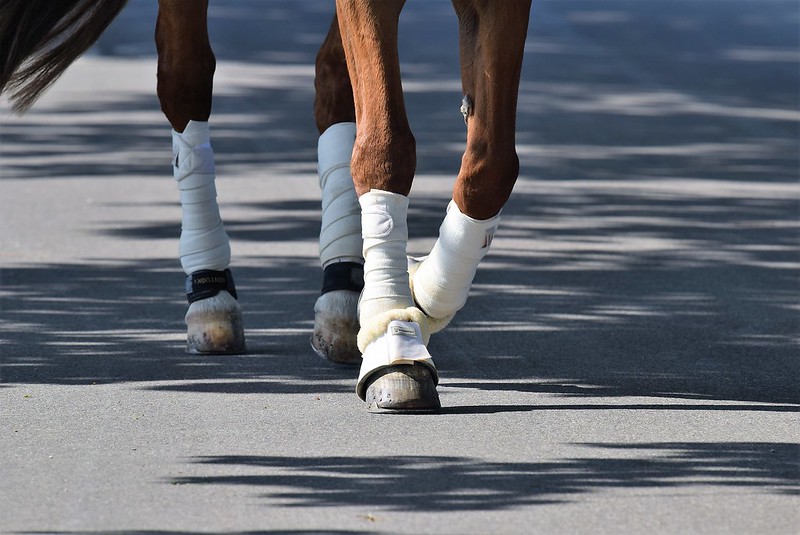 A horse passed me on my walk today and so I had the opportunity to take a few closeups. I thought horses only wore metal shoes, and did not realise they also have socks and stockings. 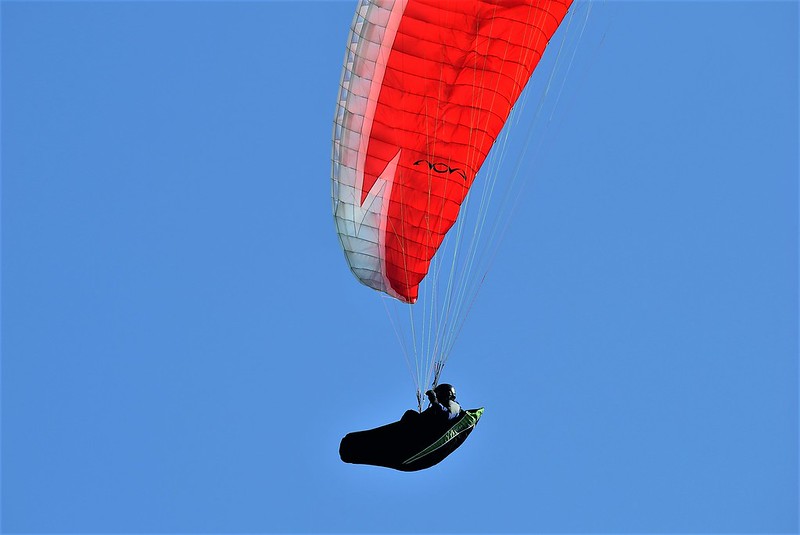 Everything seemed to be odd balling today, especially when this guy landed in front of where I was sitting from the nearby mountain top. He was quite cool, took his gear off, packed it nicely in his rucksack and began the walk home. 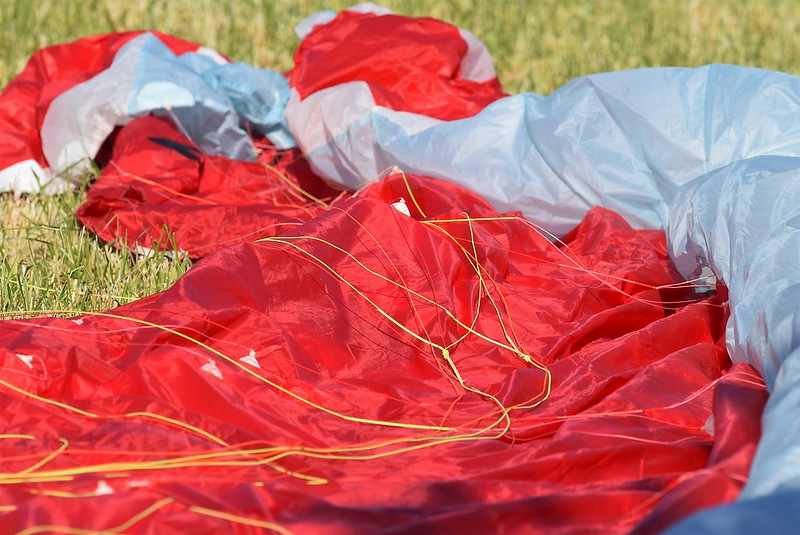 This afternoon I took a walk to the local castle. When I arrived at the top of the hill I had a rest on a bench to take some photos. What happened next was a surprise. A paraglider appeared in the sky with his parachute. He had probably arrived from the Jura mountains behind the castle. He landed on the meadow in front of where I was sitting and so I made the most of it with my camera. He laid out the parachute on the ground and began to fold it. My luck was in, the parachute was scarlet, at least I think it is scarlet, anyhow it is my sort of scarlet. 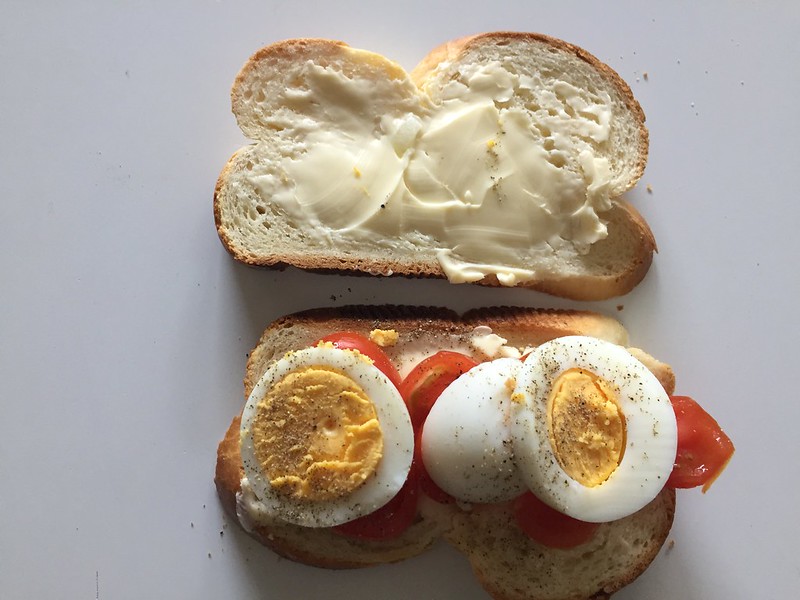 At the moment I am avidly eating my cheese and tomato sandwich, garnished with pepper. It is Sunday evening, we have eaten our way through the week-end meals and now it is time to relax and choose what you fancy –  Sunday evening is “choisi de frigidaire” (refrigerator choice). Do your own thing, eat what you find and fancy. I will probably follow this up with a cheese sandwich (I have some Italian asiago cheese in the fridge).

But avid comes and goes. I used to knit, my kids were walking around in pullovers designed by me: every evening I would sit in front of the TV with my knitting needles and watch how an arm, or a front part of a pullover would grow. I would also knit socks for the kids. I loved knitting socks. It was so rewarding and it was the done thing in Switzerland to knit socks for the kids. Even Mr. Swiss like knitted socks for at home. He would not wear them in public.

As time passed on I was no longer an enthusiastic knitter, I had a computer and there were all sorts of things to get avid about connected to the computer. Suddenly everyone was discovering their family trees. The mormons had been doing it for years, but now the software had arrived. I joined Ancestry.com, I got myself software for bulding a nice tree, and the rest was all in internet. After a couple of years I had discovered 990 relatives, dead and alive, but realised I was now at the end of the research. Now and again a skeleton fell out of the woodwork, but they were becoming rare appearances, and so I was losing my enthusiasm.

In the meanwhile I had at last fulfilled one of my ambitions to learn the russian language. I enrolled in the local evening classes and it was fun. I got the hang of the cyrillic alphabet, could write it and read it and we were a small group of russian language students meeting regularly for our weekly lesson. I stayed for about 12 years. The regular students were becoming less and so I also decided to stop. I can still speak russian and understand it, but not perfectly. Now and again I stick my nose into a Russian language book and even found an online site to practice, but it needs time.

In the meanwhile Mr. Swiss gave me a hand-me-down digital camera. He had got a new one. Where he would perhaps take a couple of photos now and again, I was taking photos daily of everything everywhere. This was the new thing to get avid about. After a couple of years I bought my own better digi camera and then I discovered DSLR cameras. I again visited the local evening classes for a photography course, with the result that I soon had my own DSLR Nikon camera and actually discovered that photography was fun. I am still avid about it and never really go anywhere without a camera: even shopping trips are more interesting when you take photos.

I seem to be a very avid person and I will not even begin to talk about the computer, without which life would be boring. It is much more interesting than knitting socks. I also devour books, I love my Kindle. Upload the book, read it, and upload the next one. Oh life can be so wonderful when you always have something to do with your spare time, although the spare time seems to be getting less and less with so much avid activity. 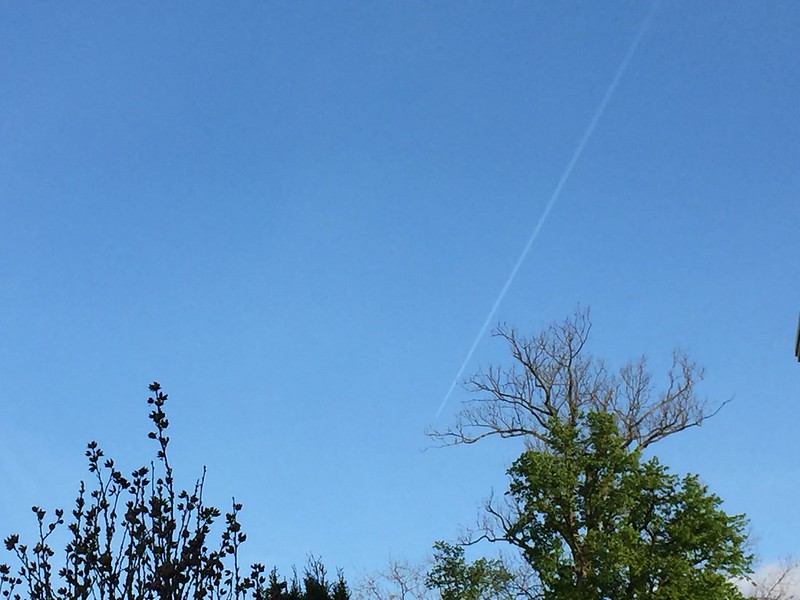 It’s Sunday and all is well with the world – almost. We had our marches yesterday in the name of science (good thing) and earth day (also a good thing, but will it change anything?). Switzerland also had a science march in Geneva, no big deal, but a few decided to march. I marched at home and gave my orchids their weekly dose of water, as well as venturing into the garden to see how things were developing. I have been somewhat cut off from my plant development over the past two weeks due to scaffolding building outside and not even being sure how to get into my garden. However, it is now Sunday, there are no workman and I have decided that this week-end there will be no photos of scaffolding, screws or metal bits and pieces.

We have blue skies, as can be seen from the photo. although it was a dangrous undertaking to get the shot, tripping over steel plates in the garden from the workers,  to find a safe spot. This afternoon I will take a walk on the wild side to see how the cows, ducks and chickens are keeping. I even caught a plane on my photo winging its way from Zürich Airport towards France, perhaps it was only a local trip Zürich-Geneva.

I awoke somewhat bleary eyed this morning around 5.30, reached out for my mobile phone next to the bed and checked the time and then something happened. I somehow got a white square on the middle of the screen, but could not read it as I did not have my glasses on. I just pressed the button and suddenly all my apps were shivering and shaking, meaning one of them was ready to go. I pressed further and everything was OK, but somewhere on the way I cancelled one of the apps and this all at the crack of dawn. I decided to sleep on and make a check when I was really awake and back in the real world. After an examination the main apps were still there, and I finally came to the conclusion that I had deleted the weather app, which I never really used in any case. I replaced it, but checked on Mr. Swiss phone afterwards to make sure there were no strategic apps missing.

The next catastrophe was not far away. I  stopped hugging the bed and moved to the kitchen, it was now 08.15 and I had my glasses on. My first work of the morning is to make my cup of tea and prepare my bread and jam slices (in between switching on the computer). Catastrophe! There were two meager remainders of bread loaves, both approaching the dry, hard, “do you really want to eat me” stage. I thought about it, but remembered that one arrived on last Thursday and the other was a thawed remainder of a frozen emergency bread from the beginning of the week. This was Sunday morning, I deserved more. But wait there was a remainder of the Friday bread, but this was one of those super fresh breads which become dehydrated after a day, and there was only a short remainder.

I was now in dire straits. First of all an iPhone problem and now no bread. However, I discovered a remainder of toast bread. Bread for toasting never really dies, although it can go green with age. This was not yet green and still ready for toasting, and my breakfast was saved.  I have decided the day can only get better.

In the meanwhile I heard a local ambulance passing through sounding its horn, so someone somewhere is also not having a good Sunday.

I will now move on to a restful relaxing Sunday and wish you all the same. 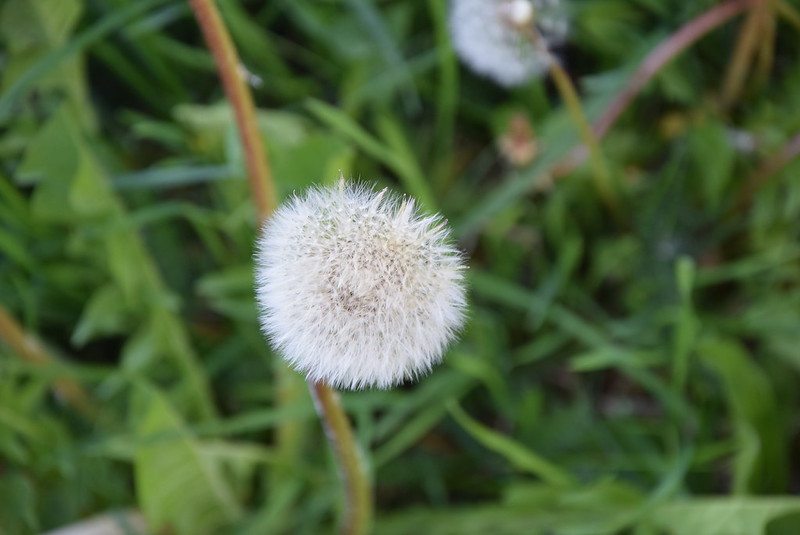