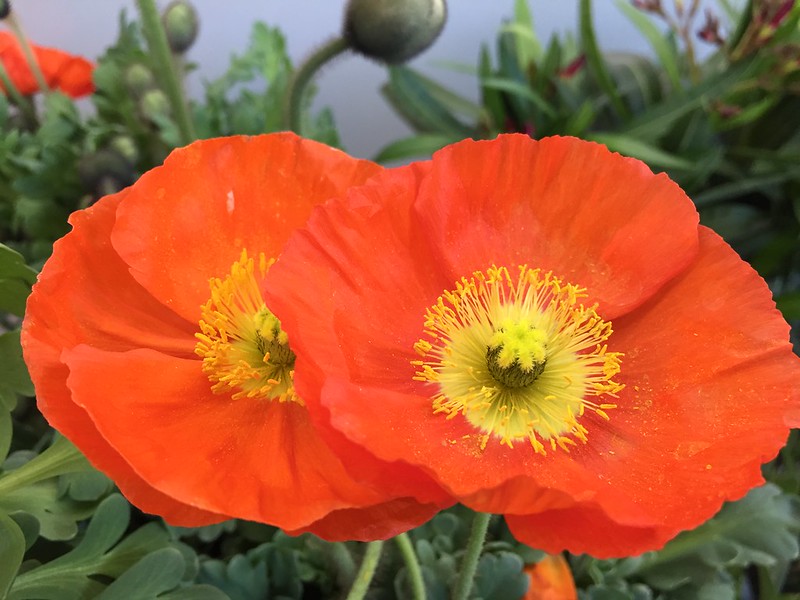 I do not smoke, otherwise I might have been tempted – seen in the store. 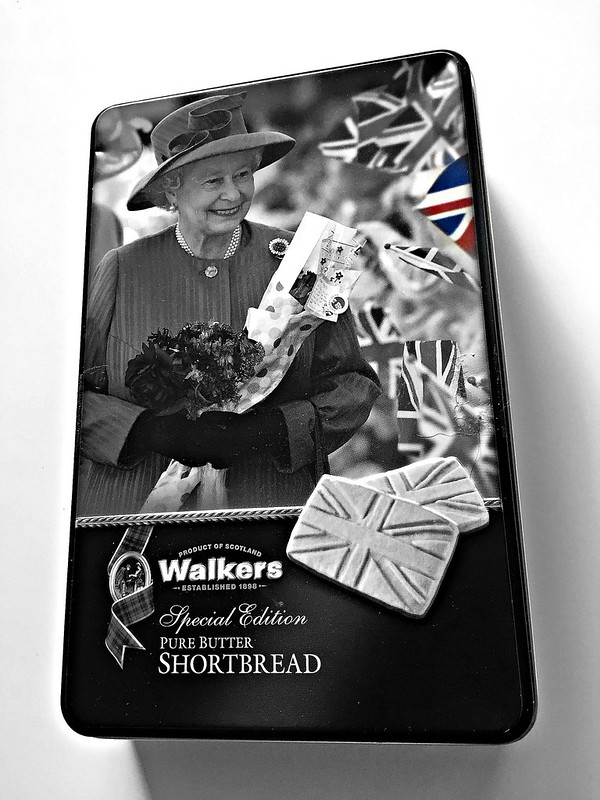 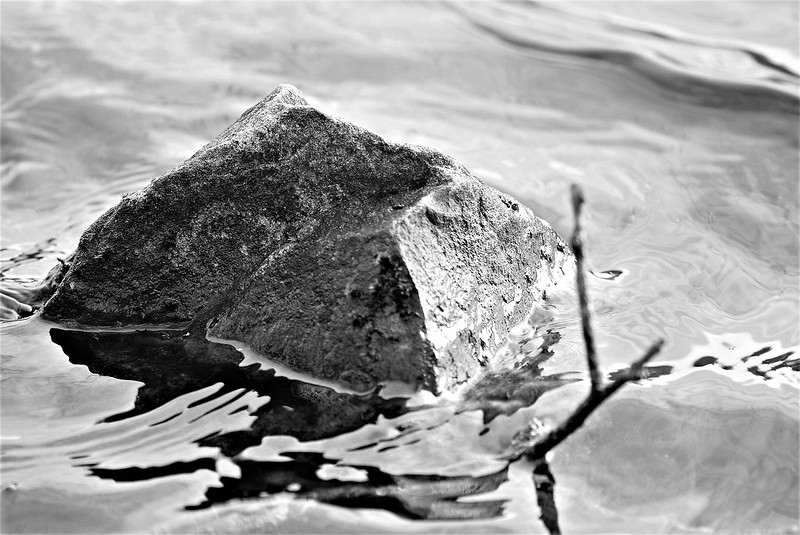 A rock in the local River Aar 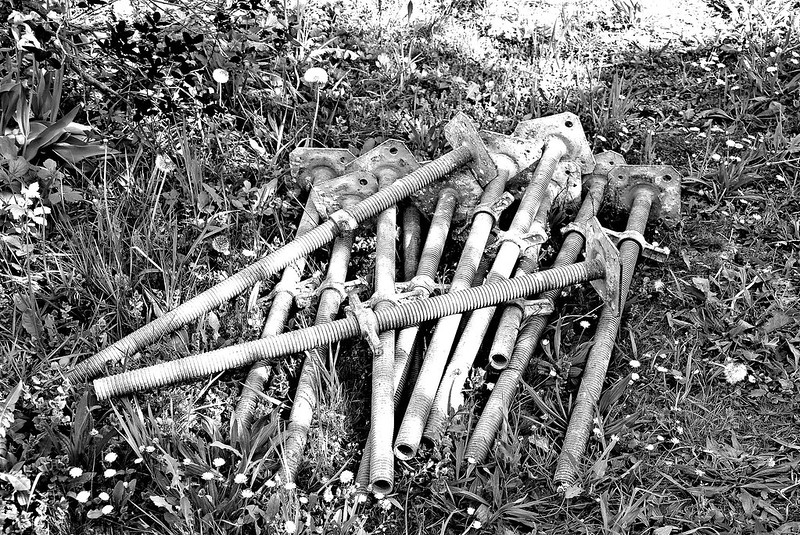 Metal rods in the grass 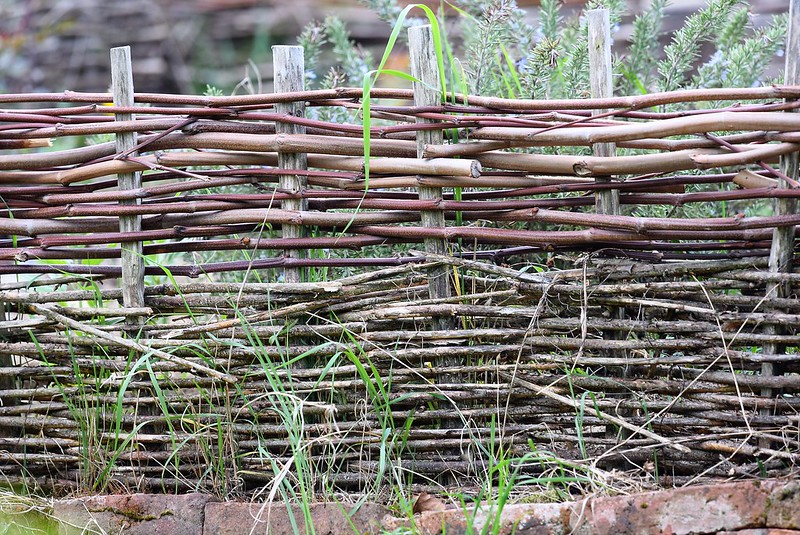 I love the way peopl use their imagination to build a nice fence, an architectural masterpiece. 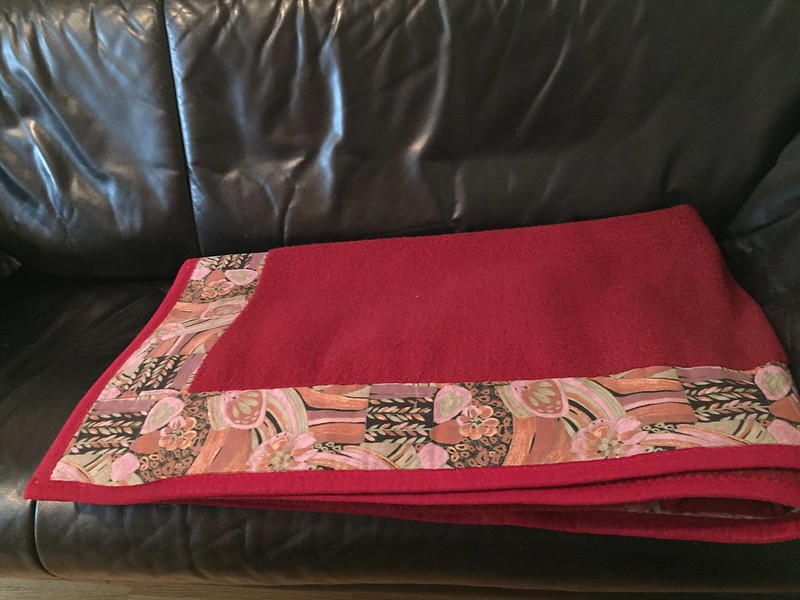 I think this is the only usable blanket we possess, but who needs a blanket today? We have central heating, warm clothes to wear, and the bedding operations have been simplified over the years. The duvet has taken over on the bed. A fitted sheet cuddling the matress with elastic edges, and a nice thick eiderdown, now known as duvet, with a cover that you can change, everything nicely hygenic.

Memories of my childhood days return when I think of a blanket. Every bed had its blanket, it was the way things were done in the olden days. Making beds were a major operation, especially if you were fussy about how your bed was made and mum and dad were very fussy. First of all there was the bottom sheet, and then the top sheet. The next layer was the blanket. I really do not know where mum got her blankets. They seemed to be family heirlooms handed down over generations and some were showing signs of becoming threadbare. However, this was no problem, as mum and dad seemed to have a stash of blankets, in all colours and qualities. I think the quality was not so important, important was the fact that they did not cost so much.

Blankets were put on the bed to make sure you were warm, and so I had at least two blankets. When everything was piled on the bed it was tucked in on all sides. To top the creation you had an eiderdown. I doubt if the feathers came from an eider duck, probably an assortment of bird life throughout England, mainly perhaps mallard duck, or even pigeon – who knows. These eiderdowns had a permanent fixed colourful colour cover and were not washable. The only part of the old style bedding that was washable were the sheets, everything else remained clean I suppose. We never really thought of things like that in the past.

However, the duvet eventually arrived from our scandinavian neighbours and everything was much easier and I suppose more hygenic. We even call it “northern sleeping” translated from the German language. Blankets have become extinct on our beds. Since I have been living in Switzerland I had the simple duvet solution to the bedding. My mum and dad would come on a visit now and again and seemed a bit lost with the duvet, but they managed.

When my dad moved into his extra care home, he had his own small appartment and I remember his bed always looking so perfect: everything neatly tucked in and he still had his blanket at the age of 100. Of course his carer was making his bed for him as he got older, but he told me she made it perfectly. He told me, even in his older years, that his bed must be made perfectly. No creases in the sheets, and of course a blanket. I asked him if a duvet would perhaps be easier. “Oh no” he said “it is not the same” and so it was. His bedroom was a perfect example of tidy and neat. We East End families may not have had the funds for everything expensive, but the bed had to be made perfectly.

But we have one blanket, you never know when a blanket might be useful.

Daily Prompt: Only one blanket

Things never happen as you expect them to, at least not yesterday morning. I was prepared for a solo journey to the supermarket in the car, to prove that I can do it. We had new curtains fitted this week and we all forgot Tabby, our feline. Her cat flap was no longer accessible because everyone forgot to shorten the two stripes that were hanging over her entrance. The guy that did it was full of apologies and organised his assistant guy to come and do the necessary. We are so please we found this place, as they really attend to everything. We did not know when No. 2 guy would be arriving, so Mr. Swiss called and they said in the afternoon.

This made a change of plans, as we were expecting him in the morning. In this case we could go on our shopping trip together – how wonderful. My driving instructor was again sitting in the passenger seat next to me telling me everything I could do better when driving. Either you ignore him or pay attention. I usually choose ignore. However, his words of wisdom are attended to and I notice when I drive solo that certain advice stays with me. I attend to my speed limits, as I do tend to drive a little on the fast side now and again. Funny, when he is not with me, I am very good at keeping the limit. He finds my steering lacks an exact touch, I do not, but perhaps one of the symptoms of a golden oldie with MS that I really do not notice. In any case we survive and are still talking to each other at the end of the drive.

At the end of the shopping safari I always take a few minutes in the flower store for a few flower photos of the day, whilst he relaxes. 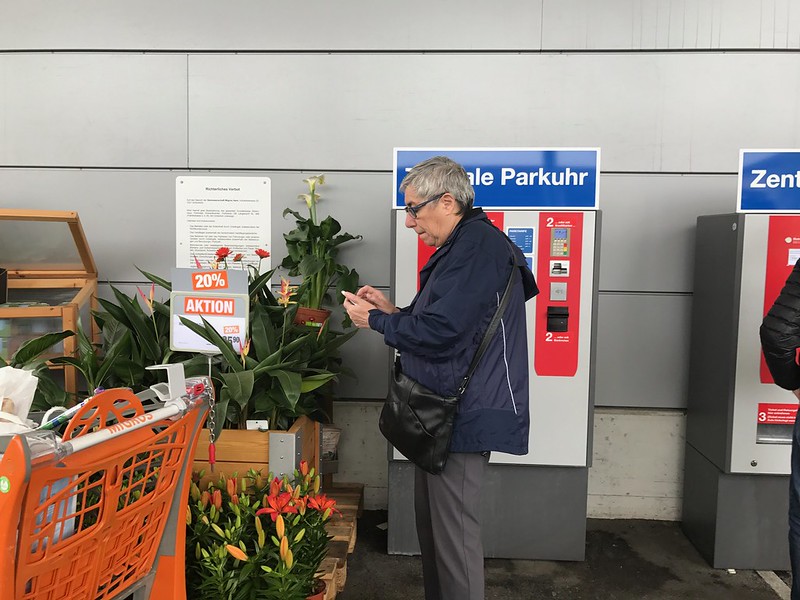 As you can see Mr. Swiss was being attentive to what Mrs. Angloswiss was doing and took a few photos of her taking a few photos of the newest arrivals in the plant world. So now you see me in action with my mobile phone camera. It was raining, hence the rain jacket.

And now back to Tabby, who was patiently waiting for her new escape tunnel to the outside world. The guy arrived and fixed it for her in a few minutes – no problem. 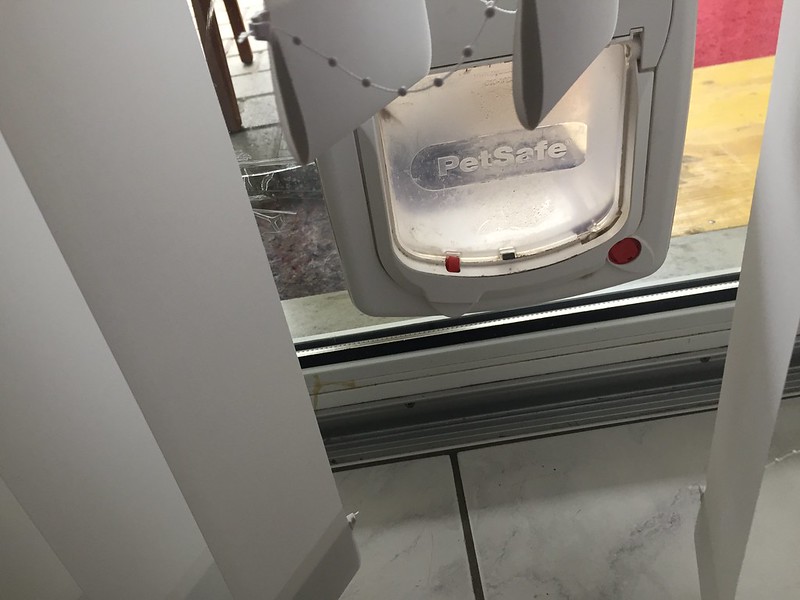 All he had to do was shorten two stripes. The great test was yesterday evening when Tabby was relaxing outside and decided to come in. She always makes a bit of a fuss when entering, the exit is never a problem. Mr. Swiss and I were sitting in the living room and heard the usual clap, clap, crash bang and she had passed the test and was inside with no problems. She is a clever cat with 15 years cat flap experience.

I am not sure what today will bring. This morning I have a few mud splashed windows to clean, just three, from the mess made by our new moat/ditch that the builders have constructed. This week they did not turn up, but today they have returned, but not our usual builder. However building scaffolding is the same everywhre. Mr. Swiss thought they were not working because of the rain, but I have never seen empty building sites because of rain. They are equipped with steel helmets and sturdy leather boots, so what could possibly go wrong.

I was thinking if Mr. Swiss makes a journey to town this afternoon, I might accompany him, although he has not made up his mind to go places and do things. However the day is always full of surprises.

See you around some time later.