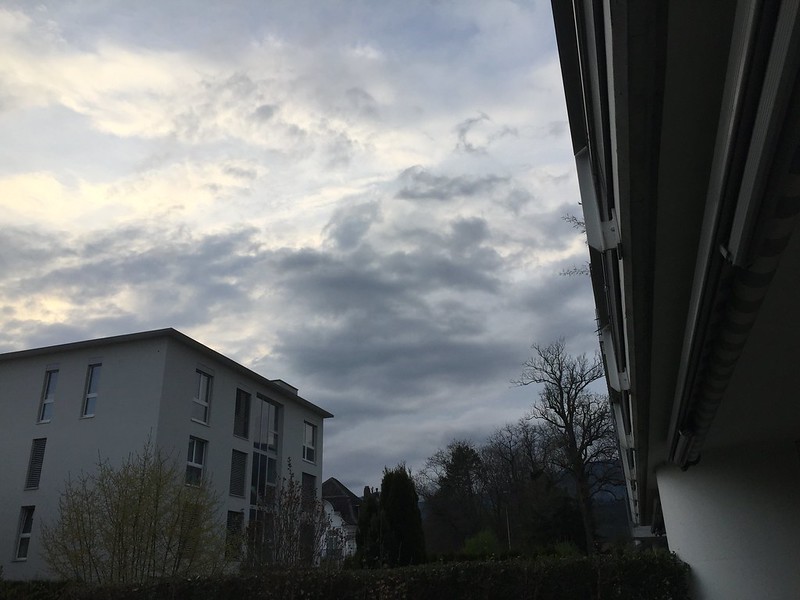 It makes a change to show an evening sky on my prompt, as I am usually on the computer at breakfast with the morning sunrise. As you can see it is a dull evening, might even rain later. I realised today what a person of habit I have become. A daily prompt that arrives five hours later. I was worried. Had someone decided to ban blogging in a certain country, was this a new dream that a certain leader of a nation had, or was it just an April Fool’s day joke? I know there are certain countries where blogging is not looked upon as something favourable. It could cause a political upheaval and it has been known that people have been thrown into prison for blogging. It seems I live a daily risky life. Perhaps we are lucky in Switzerland. We can blog in four different languages and if you are lucky, the others will not understand it.

I always have a memory of my mum on 1st April. It was 1st April, 1957 when  a BBC programme showed the spaghetti harvest on the trees in southern Switzerland which I also watched. At that time spaghetti arrived in tins in England, together with the tomato sauce, and so of course mum was watching intently, her remark being “look at that, I never realised that spaghetti grew on trees” which was not unusual for a normal working class mum in England. She was convinced at that moment that it was harvested and afterwards canned. In 1957 no brit cooked their own spaghetti. Pasta was an unknown foodstuff amongst those of british origin. There were a few Italian immigrants who were probably astonished at the spaghetti tree, because they knew it was not possible. There is even still a link in Wikipedia Spaghetti Tree Hoax

That this was an April Fool joke no-one realised and it was quite a subject of conversation about the spaghetti trees. Of course today with the EU and countries growing closer, it would not be possible to bring such a joke.

I almost got caught today when I told Mr. Swiss that Trump was thinking of resigning. I mean it was not so impossible. Apparently he was tired of the job and found others could do it better. I believed all this rubbish until Mr. Swiss reminded me it was 1st April. It was only later in the day that I saw the reports that this was one big 1st April joke – what a shame.

And now it is time to go. Writing prompts at the beginning of the evening is really not my thing. It is time to think about switching off the computer and doing something more worthwhile like reading a book, or eating the apple tart that Mr. Swiss made today. 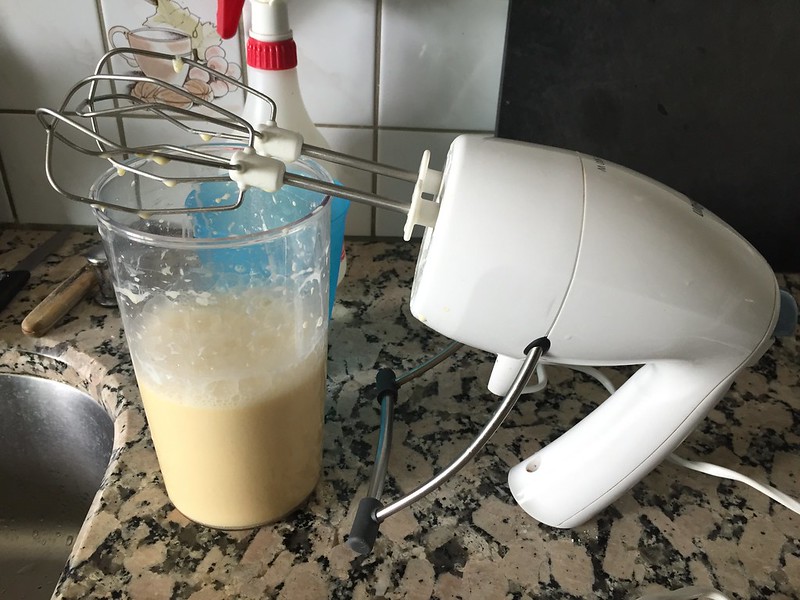 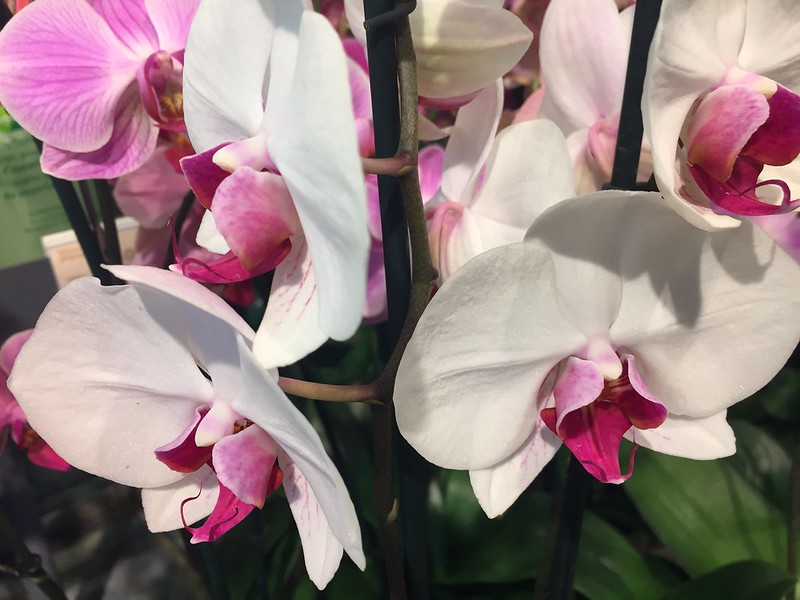 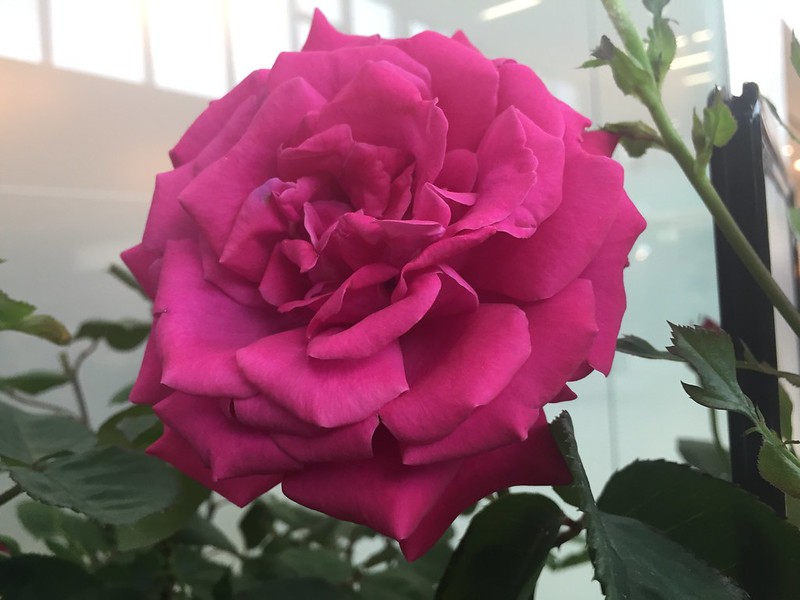 I think this rose has the razzle dazzle. 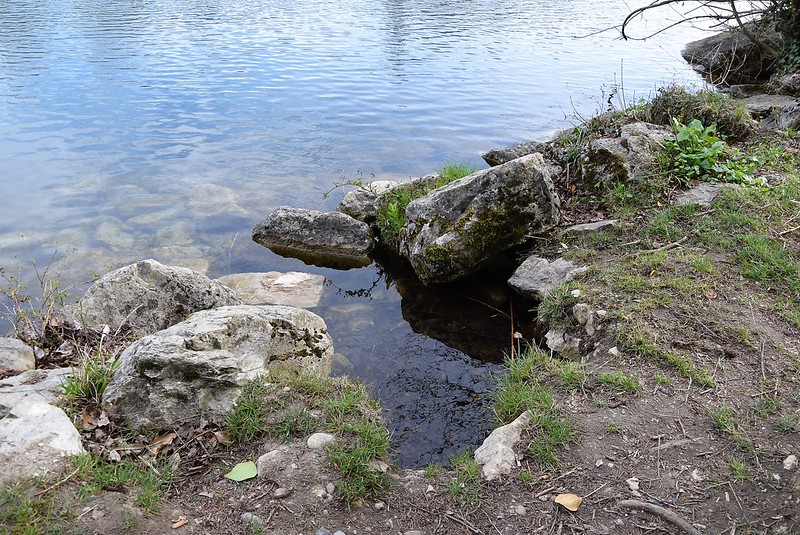 I took a walk along the River Aar yesterday afternoon. The weather was warm and pleasant and there were not many joggers, cyclists or other interruptions. I have noticed that Friday afternoons are good for a quiet meander. It is a working day for some and the housewives are busy shopping and doing what they do on Friday afternoons. It was just me and the dog owners, and that was fun.

There was one guy with his dog that had taken him for a swim. He threw a tennis ball into the river, and doggy jumped after it. After he had retrieved it, he kept the ball in his mouth until it was thrown again. This was fun for a few photos. I especially liked this one. 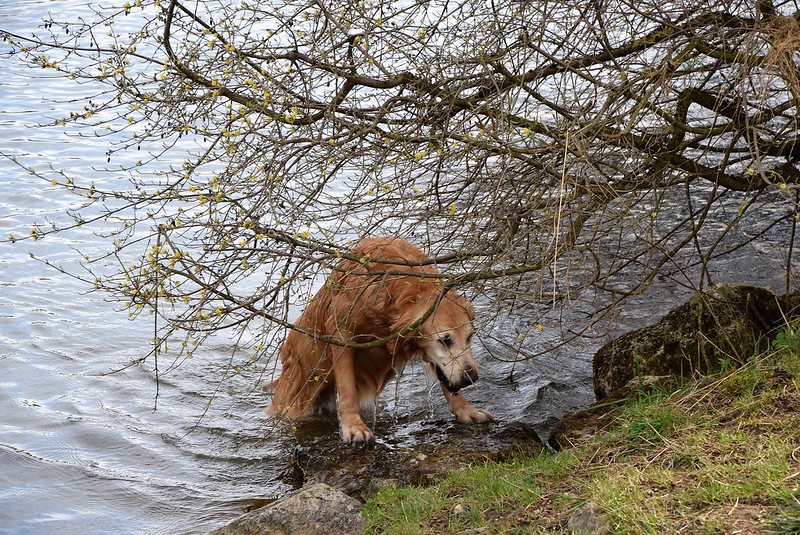 It looks like with its last remains of energy it manage to climb back onto the river bank. Afterwards it had a good shake, spraying everything with the residue of water in its fur, and came back for more.

I walked on further and met yet another dog owner. This time it was a big black and white dog. I got into conversation with the guy with the dog. He saw I was taking photos and said it was a great day for a walk, but the farmer was now spoiling it with the smell of the fertiliser spreading. To the right of the river bank, the local farmer was busy spraying the fields. I told him it did not bother me so much, as I grew up in the smell of London traffic and agricultural smells belong to the country. Of course that was an opportunity to have a discussion about London. As most Swiss, he also did his London year as a student, as did Mr. Swiss. He was astonished that I found my own way to Switzerland and not because of Mr. Swiss. Mr. Swiss arrived on the scene as a supplement when I was already living and working in Switzerland.

I decided that a photo of the farmer muck spreading was also something interesting. The farmer even stopped the tractor as I was taking photos, and I was sure it was for me to take a few perfect images – who knows. 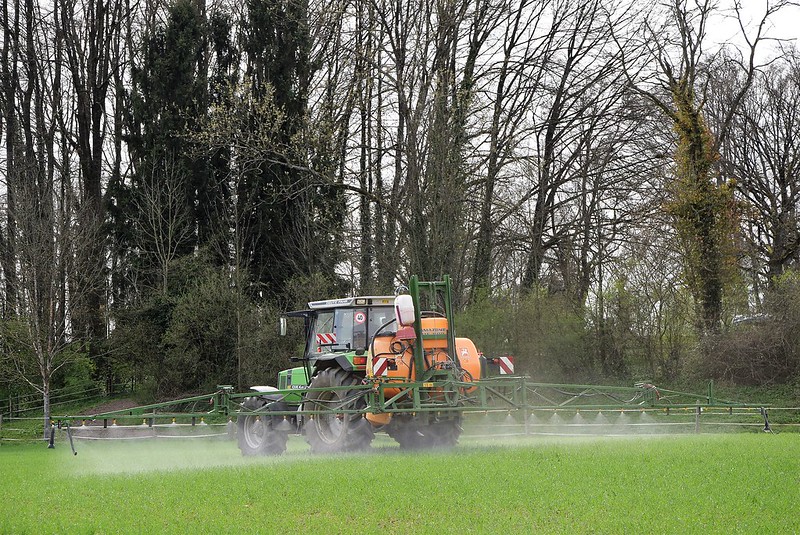 After all this walking and talking and taking photos I took a seat on the river bank to recover from the exertions of my walk.

Later in the evening we had a pleasant suprise. No. 2 son called to ask how dad was (he is suffering from shingles at the moment, which is not very pleasant) and to inform us that at last my son had his sort of big break (at least it was for us being the parents). He works for a ministry of the Swiss government in the media section, and our bilingual TV station were bringing a small entry about how our news bulletins are prepared with the subtitles for the TV as Switzerland has two main languages: french and german.

They needed an interview for their article and my son was available to do it. OK, it was only a few minutes, but it came twice, once in French and afterwards in German (Swiss German). Mr. Swiss found the TV station and recorded it naturally in both versions. Son No. 2 speaks perfect French (although he said a couple of small mistakes slipped in – which I did not notice) and of course the Swiss German version was fine. It was lovely to see my No. 2 son on the TV, perhaps a star is born, who knows 🙂 They showed him walking out of his building where he works, and then he stopped to give the interview. I was so proud of him. He has given a few interviews for various special political news reports, and was once invited to the studio with others as the audience in a political debate, but never as the “star”.

Today we are taking it easy. We made sure there would be no extras to buy in the supermarket today, and we are staying at home. The weather looks good and the flowers and trees are now preparing for the big show, so I will probably be on a camera walk in the garden, before the builders arrive on Monday and destroy the Summer for us.

I will be back later. In the meanwhile the appartment will be cleaned, I will be showered and lunch will have been prepared and eaten. What a stress! Yes, being a golden oldie is a full time job. One of the reasons why I take an after lunch sleep, to recover from the exertions of the housework.

Enjoy your Saturday wherever you are and do not forget, there is always a Sunday to follow up.