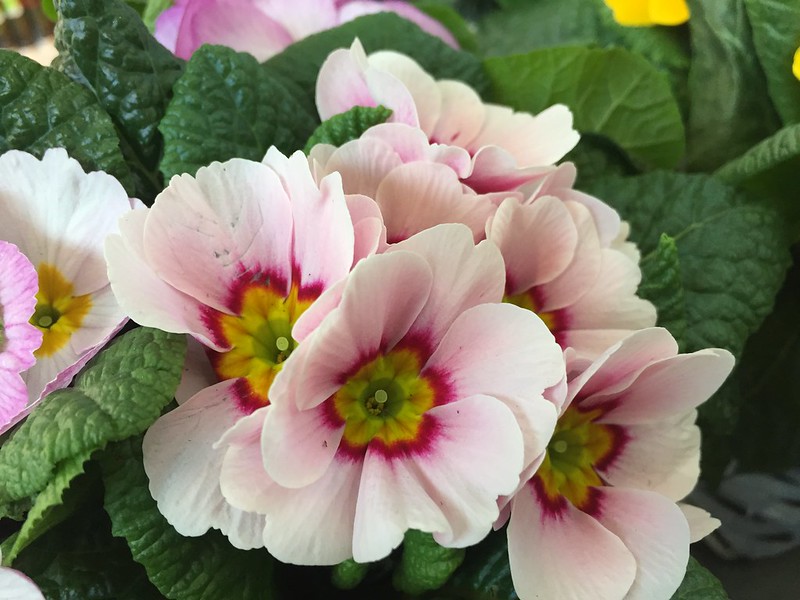 And yet another wonderful primrose in beautiful colours. 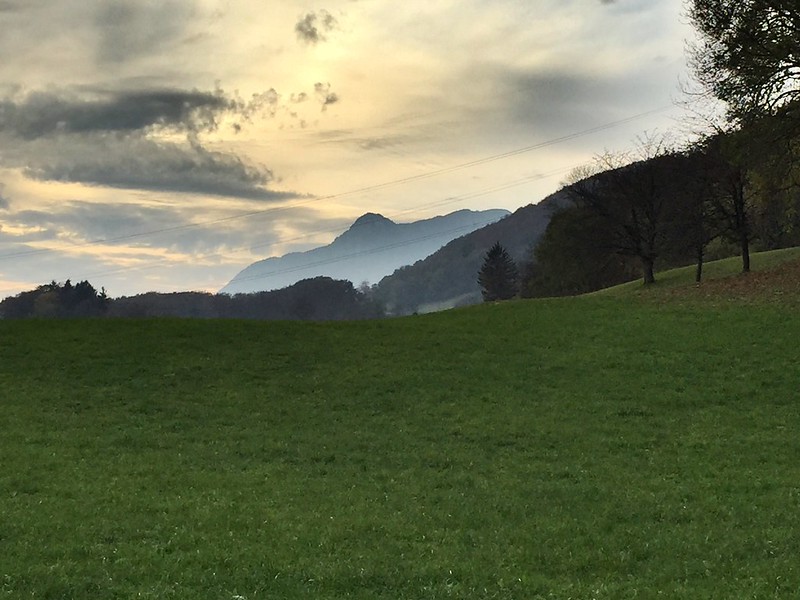 Just part of Switzerland on the outskirts of a village with a view on a mountain. You find these places everywhere in Switzerland. You can take a walk on a path, and see no-one for a few hours. Switzerland has enough space it seems. When the population of a country is no more than eight million, there is room for everyone: even a few thousand cows have their own pastures.

At the end of 2016 there were 478 inhabitants living in the village. Now there may be less, probably not more.There is a bus service, but no trains. We paid a visit and parked the car. The road was a one track road leading into the village and everything seemed to go uphill or downhill. 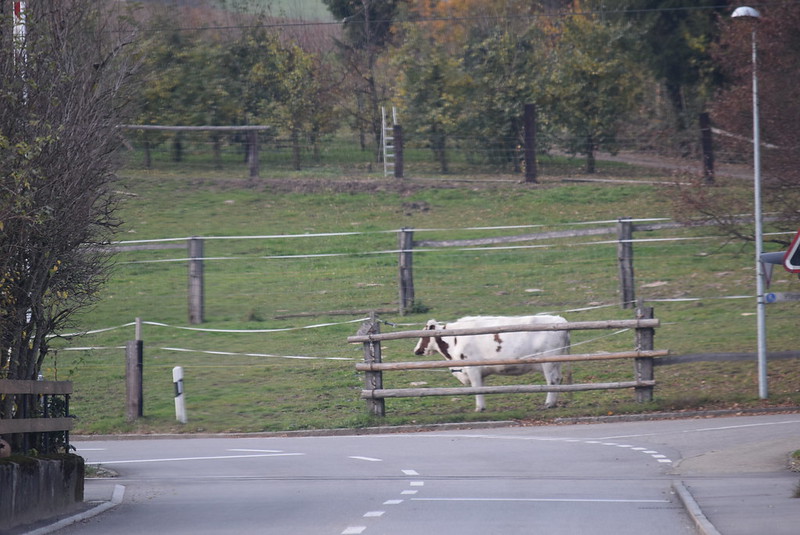 There was a lonely cow in a field on the way to the village. We were the probably the event of the day for the cow when we drove past.

I have golden rod in my garden. It arrives regularly every year, and is a home for all sorts of insects. 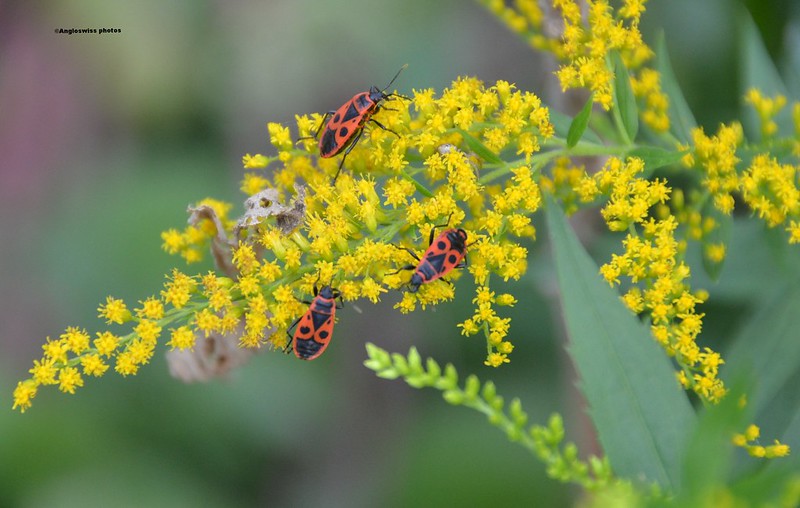 Fire bugs love to hold their meetings on the golden rod. It is also a plant that sows itself freely if the seeds find a comfortable place. 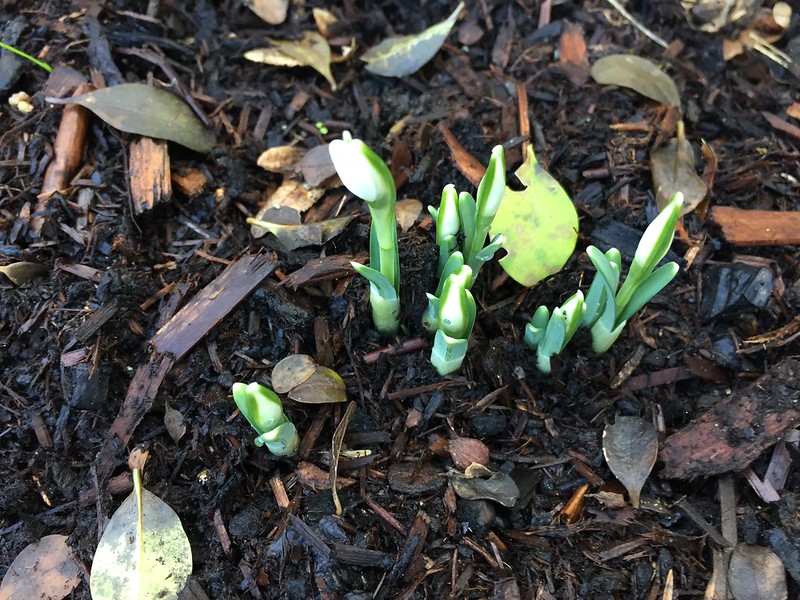 I have just been overwhelmed. After a golden oldie midday sleep I arose, pulled myself together and let the cat out, who was waiting to enjoy the warmer weather. I decided to accompany her into the garden, and then I saw my overwhelming experience. The first snowdrops are showing their heads. The garden has been covered by a snow layer for the past weeks and there was nothing to be seen except for footprints in the snow and a few birds that decided to see if there was anything for lunch. Now the first snowdrops have arrived, so it looks like Spring is on its way, although it still has a long way to go.

It was then I saw next surprise, clinging to the wall. When you find things clinging to walls, take a photo, you never know what it might be. 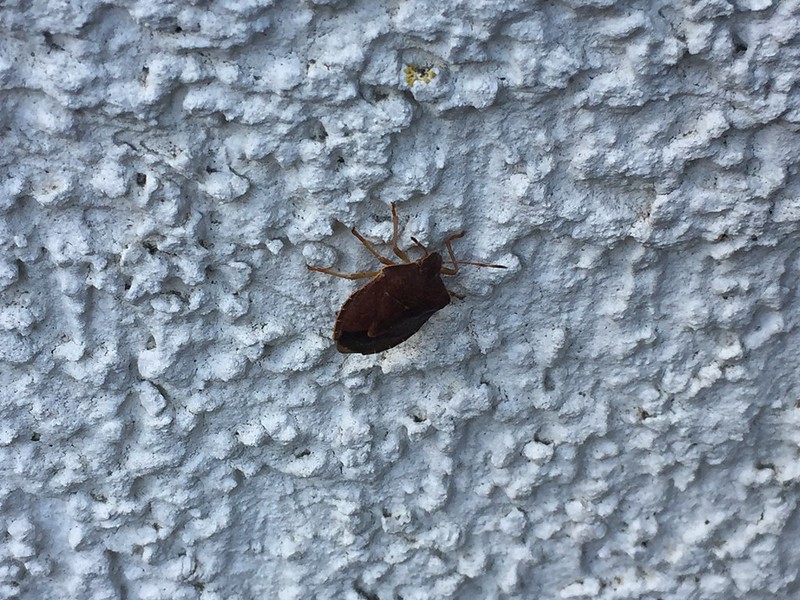 I proudly showed my discovery to  Mr. Swiss. His reaction “don’t touch it, do not go near to it, avoid it”. I was under the impression that my garden was under attack. Just a sweet little brown bug discovering the world and had probably only just slipped out of his next, or egg, or whatever. He was to be avoided, ignored, left to lead a lonely life. I only actually wanted to take a photo, which was not so easy as this bug was clinging onto a vertical wall and I only had my mobile phone camera. Anyhow here he is, so what was the big fuss. Mr. Swiss informed me that it was a perfect example of the race known as “stink bugs” and they do stink, the stink is overwhelming it seems and if I make contact with it, I will also stink.  I was so glad I had at last found something more to write about. I do not get overwhelmed so quickly these days, and now I had two things to write about for today’s prompt, snowdrops and a stink bug.

The day is not over. Perhaps I will get a phone call from the Pulitzer prize people to inform that one of my spectacular photos have been nominated for a prize. There is also a chance that one of my great blogs will be chosen as blog of the year – if pop stars can get Nobel prizes, then why not bloggers? There are all sorts of opporunities to be overwhelmed.

So to alleviate my disappointment I decided to take a look at my back garden. 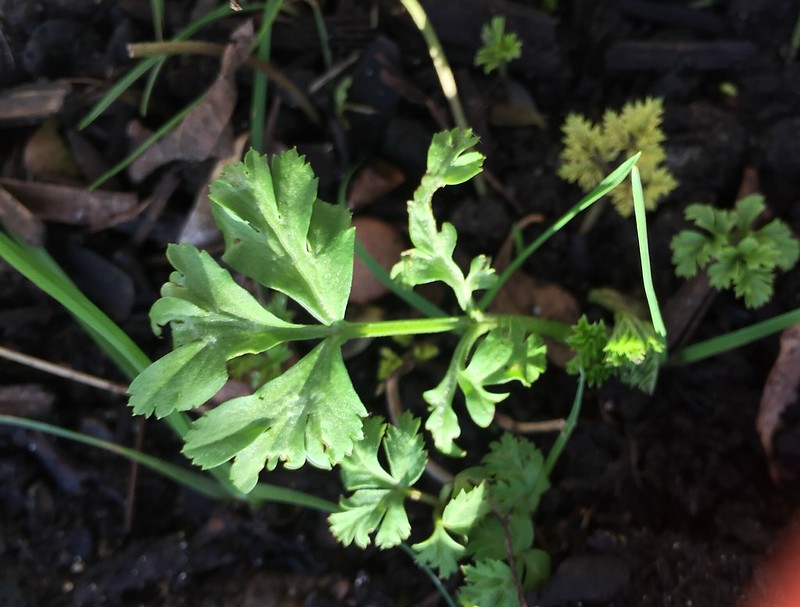 Even my anemones had survived the Winter and had begun to show their leaves. What could be better. 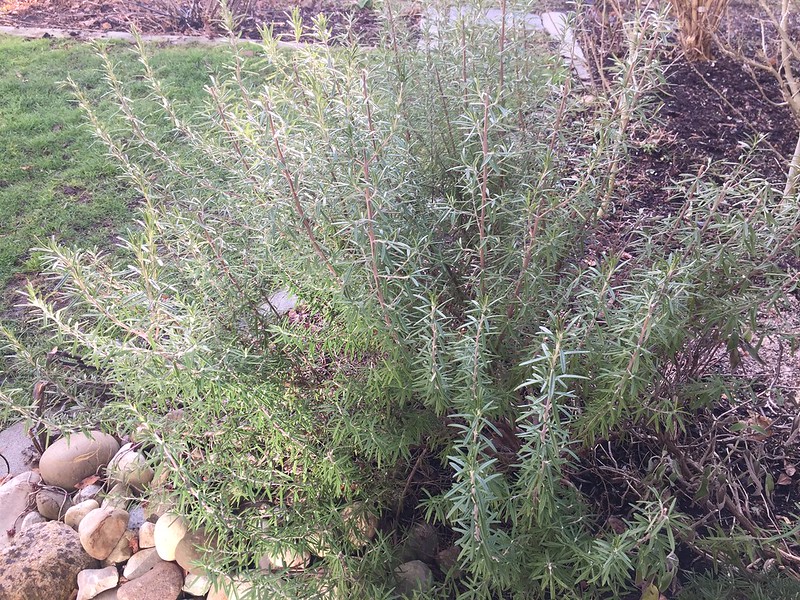 My rosemary of course: despite the fact that it was snowed on, it survived. Switzerland is not a bad country for rosemary, but it is a sensitive plant and if it survived the Winter then you have good prospects of it growing well during the year.

And the overwhelmations are now finished. Spring has not yet sprung but it seems to be thinking about it and tomorrow? Is my 48th wedding anniversary – will be back.

Daily Prompt: Time to be overwhelmed

The greeting this morning is in chinese, and according to Internet Mandarin Chinese, so I hope it is and not some sort of chinese profanity, you never know.

Otherwise my first check this morning found that Trump is still in charge, a Swis machine had to land in Canada because they somehow lost a motor and it is raining outside. 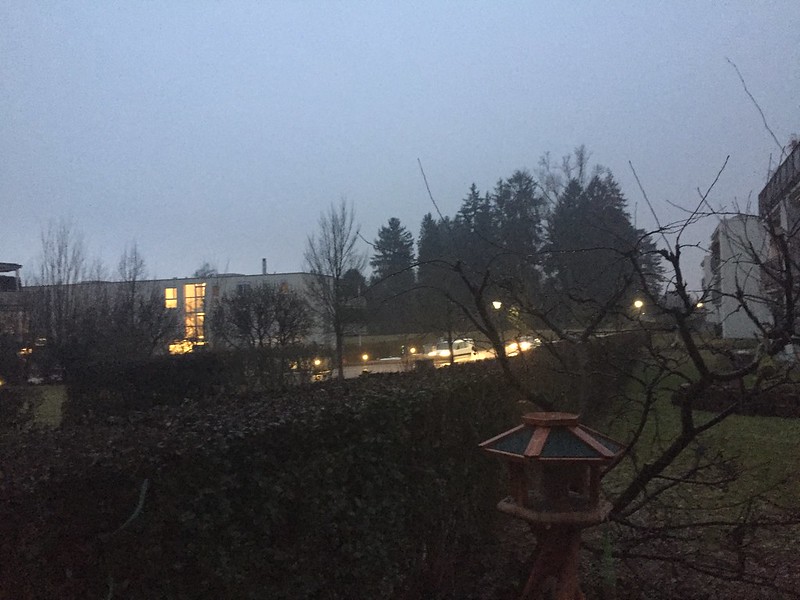 An early morning photo as our estate awakes. It was raining and a couple of cars were driving throught on our local road.

It is Friday again, time for a week-end shopping tour. The list is made, it is united on our cloud on the telephone, so two golden oldies will again be seen in the supermarket with their mobile telephones in their hand checking through everything and eliminating what is already in the shopping trolley. You have to go with the times I suppose, and as I am no longer capable of writing anything by hand that I can read myself, it is the best solution. I notice other golden oldies are not so cyberised as Mr. Swiss and I, but they seem to know what they want.  This time Mr. Swiss was the driving force when he told me yesterday evening he had made the list so I called in to check through it and add anything he might have fogotten. There were a few odds and ends, it always needs a woman’s touch somewhere, but otherwise he did quite a good job.

This morning we had a call to say the guy will be coming on Monday morning to replace our cracked sink in the bathroom. He said something on the phone about 7.30 a.m., but we managed to move it onto 8.00 as at 7,30 in the morning we are still feeding the birds and eating breakfast. Anyhow it was a prompt organisation. Probably because we still had the detailed plans from the last two times when it got a crack.

We have another voting week-end in Switzerland in a weeks time, although we have already completed our papers and sent them off – we do it by post, although our voting place is only around the corner living in a small village. I am not sure what I actually voted for, but even one of the newspapers said it was very complicated, but it would be a good thing to say yes. I leave it all up to Mr. Swiss, as he has it in the blood. I am just an immigrant in this country and a paper Swiss. I usually skim through the items on the voting list to see if there is anything that would really bother me, but generally what 7-8 milion people is Switzerland decide cannot be so bad as to change the face of world politics. Most countries are not even sure we exist, just a place to pass through when on your way to somewhere else.

And now time to go, whilst the going is good. 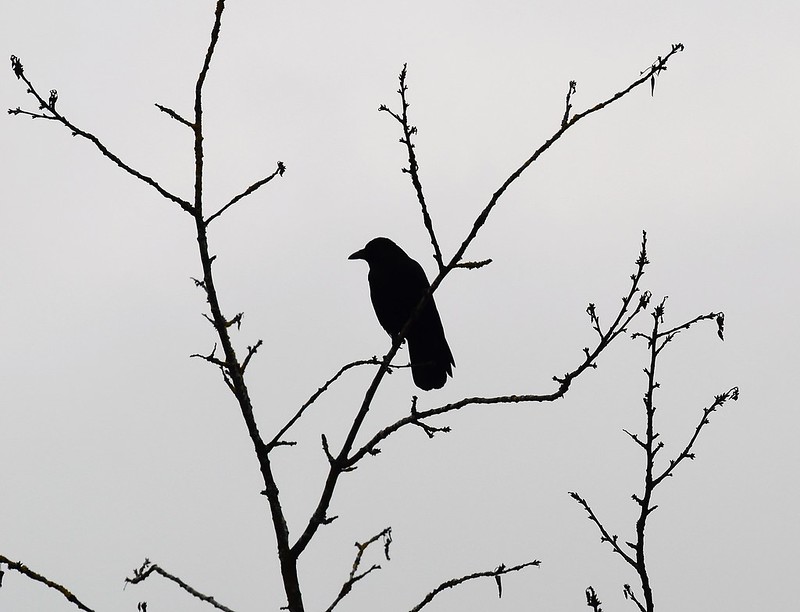 There is always a crow watching somwhere.