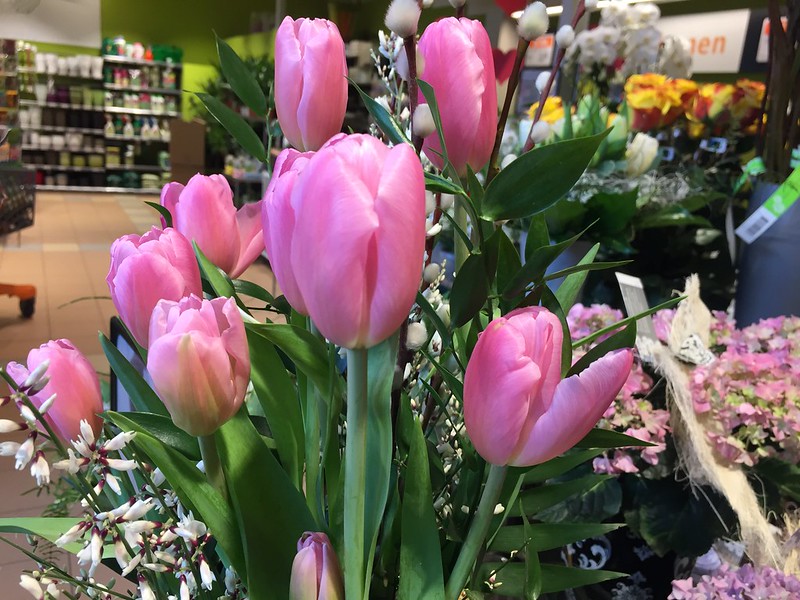 Spring is in the air – so anyone for tulips? 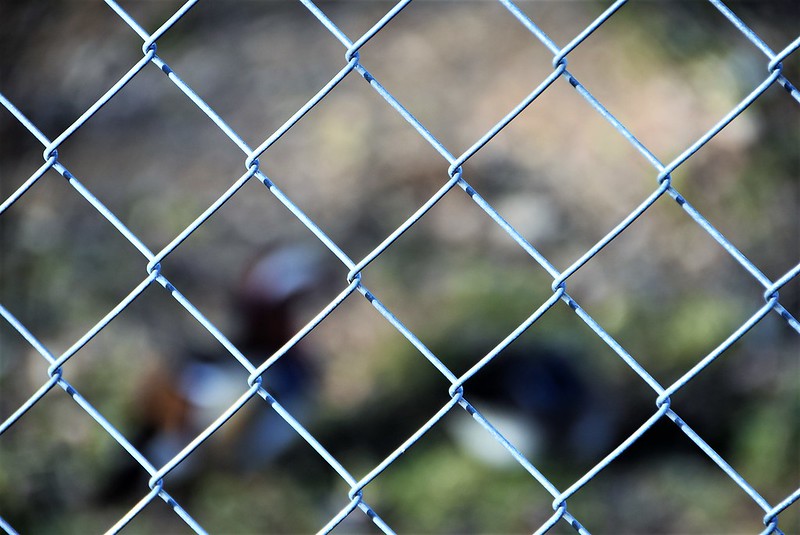 I was actually taking a photo of what was behind the fence, but my focus did something else and turned the photo into an odd ball. 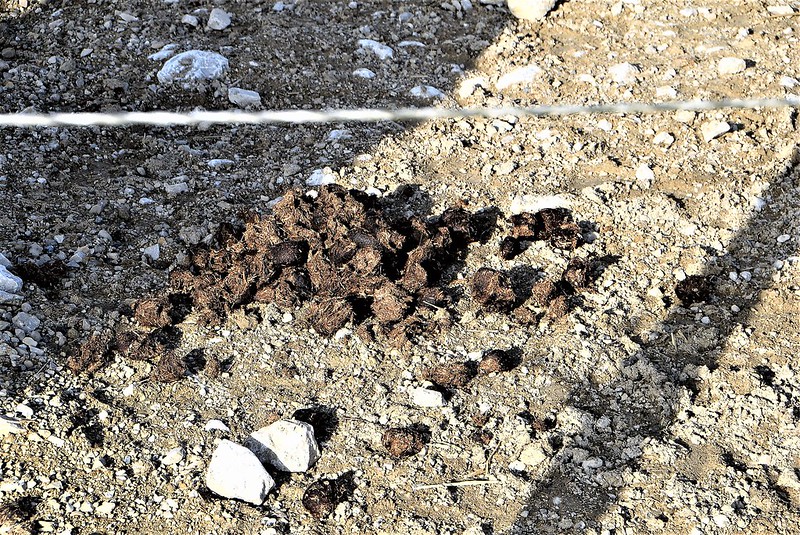 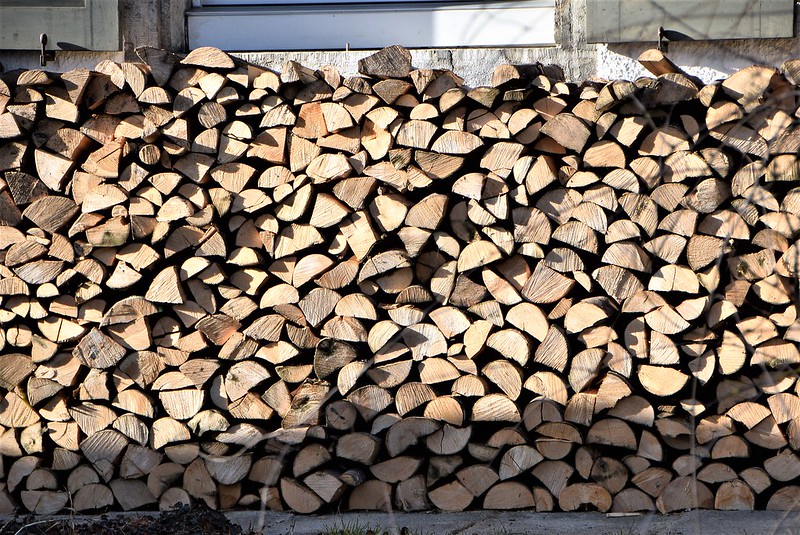 Always make sure you have enough wood in Winter for the fire. 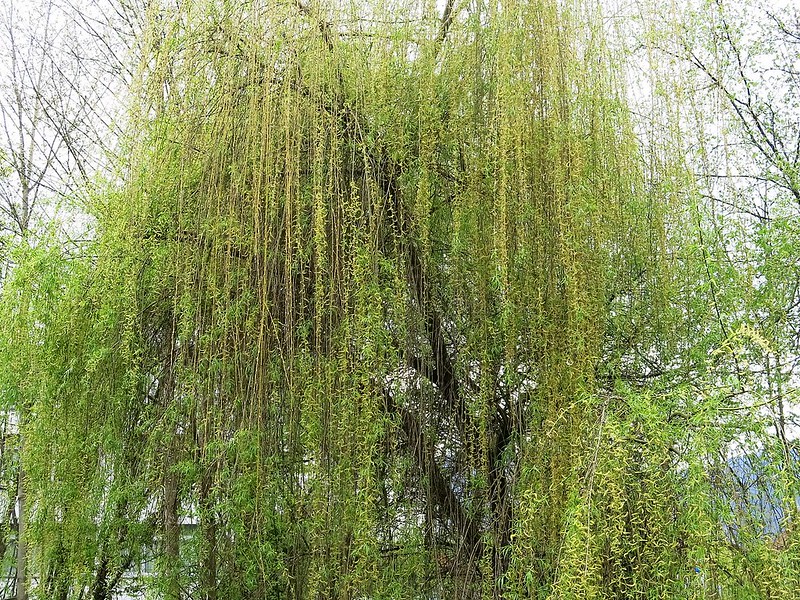 And the weeping willow is weeping yellow green tears. 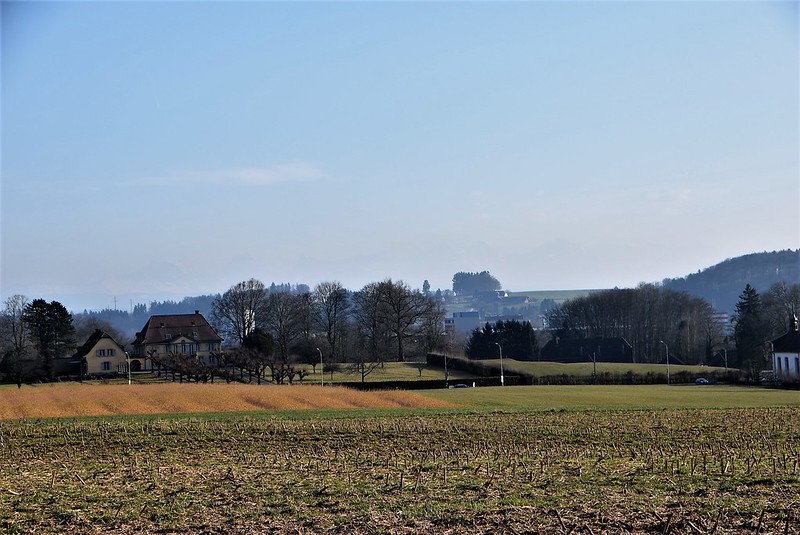 I have been in semi hibernation from November until now. The only break outs I did were the visits to the supermarket. Today was the day, I decided this morning I would escape, throw my cares aside, ignore the daily prompt, and take the camera for a walk. The sun was shining, nothing luke warm here, it was cold, but with a warm coat and shoes there was no danger of freezing. I even managed to coax Mr. Swiss to come with me, but which way? We decided to take a short walk to the stables and visit the horses, the chickens, the ducks and the geese. 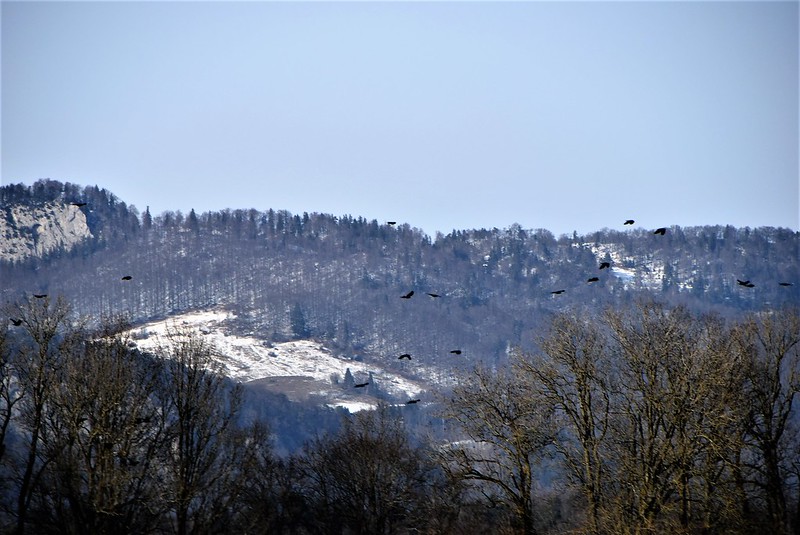 There were still some remaining patches of snow left on the Jura mountains, but not too much and I managed to catch a murder of crows winging their way across the landscape. I could say flock of crows, but it seems they prefer to be called murderous, although we survived with no pecking injuries. It is not so easy when you need a cane for support and have a camera to handle at the same time, but I can be very inventive. I can stand on my own, so I hang my cane into the opening of my jacket at the top of the zip and find a comfortable tree to lean on. I then manage to take my photo. As we moved on there were no more trees to lean on, just bushes where I could hand my cane and eventually there were no bushes. That was when Mr. Swiss insisted that I give him my cane to hold to prevent any accidents happening. 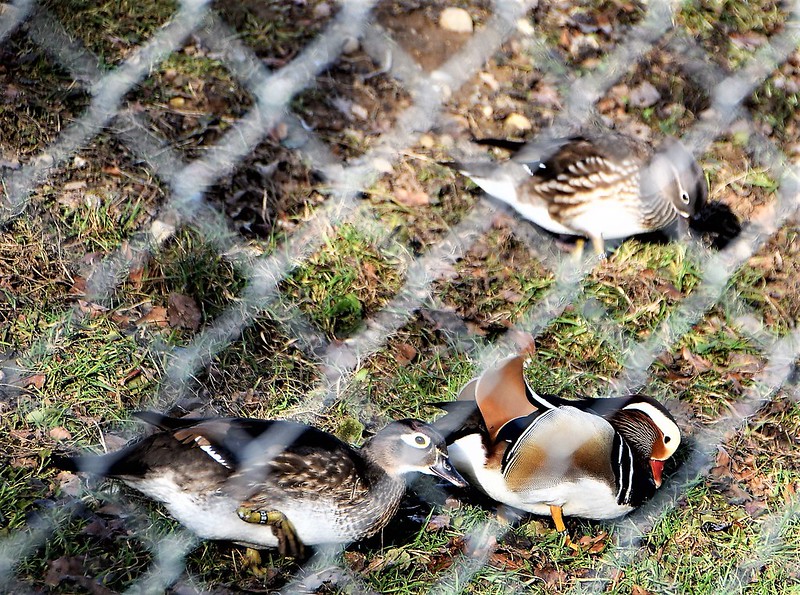 We soon arrived at the stables where they now have a few additional ducks, but not just any ducks: sort of special ducks. Sorry for the poor quality of the photo, but there is a fence in between under electricity, although a few chickens managed to stray out without getting roasted  and ducks can fly in any case. 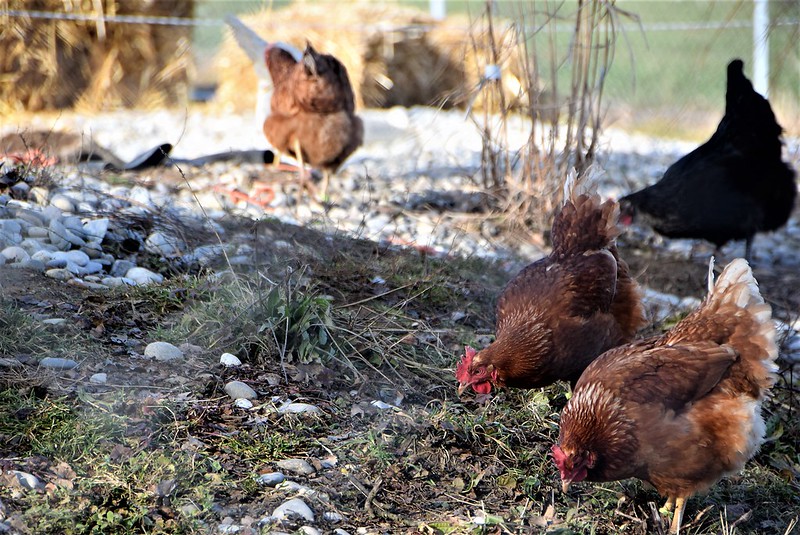 They still have the chickens producing eggs for the village population. I should really try them some time. When you know the chicken that laid the egg it gives it the personal touch. 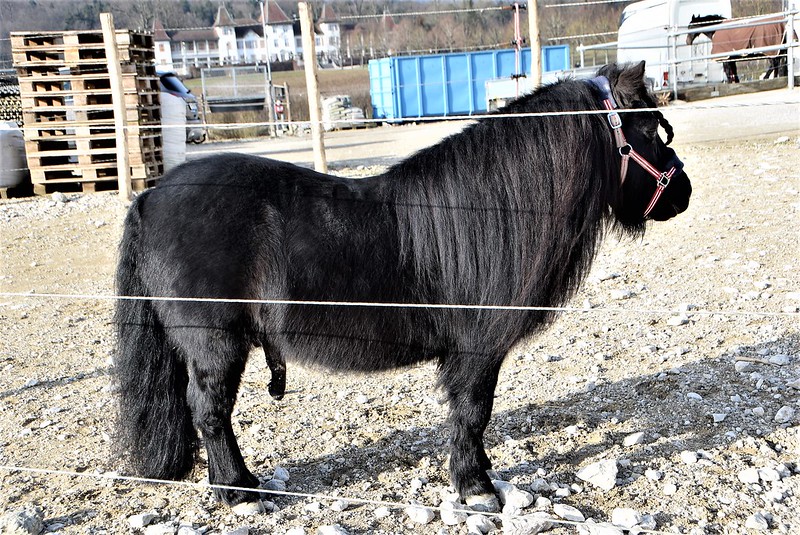 They now have a pony in the stables, a male pony it seems, for giving rides to children. 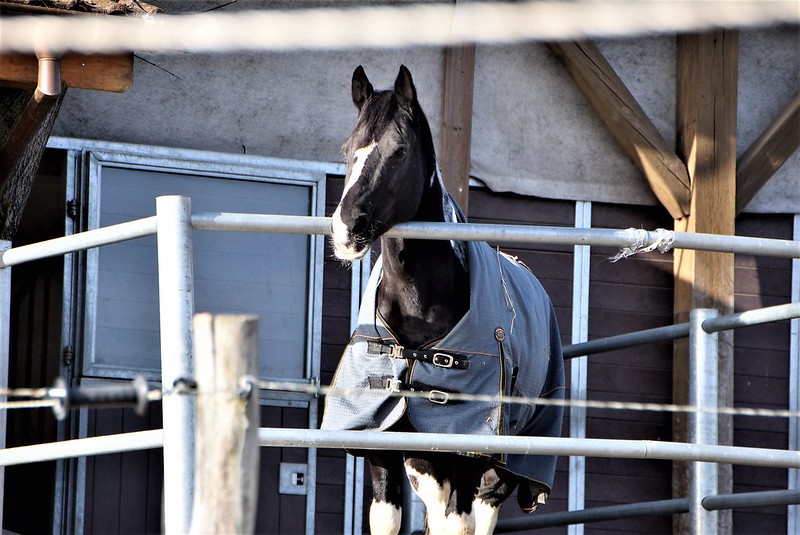 This horse got very curious as I took out my camera, so I decided to do him the favour of taking his picture.

Mr. Swiss decided after almost an hour it would be time to return home. My left leg was giving me a signal by not keeping up with my right leg. The ducks and chickens and the horses all waved goodbye to us. It was a real re-union after so long. Although when arriving home, we were both tired, but happy. It really made a change to get out into the fresh air.

I have now been busy uploading my photos, all 70 of them. That was the main reason I really wanted to get out, to take photos of something different.

We had a voting day today in Switzerland today, nothing dynamic as we have them often, so as soon as we arrived home the TV was switched on to see what the politicians felt about the results, although I retired to my computer.  In such a small country, results arrive quickly. I will not go into details about why we voted, because I do not have a political blog here. My idea of blogging is too have fun and not discussions.

I am looking forward to some more excursions into the wild, now the weather is becoming more sociable. It seems this week will remain snowless.

Today’s bilingual greeting is also in Farsi. You know, the language they speak in Iran, they are different to the rest of the arab world as they do not speak arabic but Farsi. I saw an entry in Facebook this morning by Time magazine, where they had pulled together all those “America first, may we be second” videos from various countries and one of them  from Iran. I was quite surprised and pleased that they are now joining in the fun. It was not a bad effort. One of the countries I dealt with in my export days was Iran. They were not the easiest to deal with, but it worked. Payment was always by bank business, Letter of Credit. When dealing with L/C you had to follow every little detail on the document, the dots on the “i’s” and every word had to be written as shown on the document, in spite of perhaps grammatical errors – this is not only Iran but all countries.

I got to know the Iranians and found them very nice and correct people. I remember when the goods were ready for transport, we had a guy come to the company and compare them with the paperwork. He would issue a document to the effect that it was correct – another L/C stipulation. I remember all air freight shipments had to be flown by Iranian Air, and they only had one flight per week from Geneva.I once missed a flight – no my fault, but the airport, but we got the money all the same. This was now almost ten years ago, so perhaps things have changed since.

Speaking of these Trump parodiy videos, I noticed that Great Britain have not made one, so I draw my own conclusions that they either do not want to be second or are still sorting out Brixit or perhaps do not know how to do it. I do not know why they have such a problem, but Switzerland never joined the EU, we had a referendum about it and made our decision. Now we have fun watching how the others are dealing with their escape. I am sure if GB asked Switzerland we would help them to grab their right solution.

Enough politics for a Sunday morning, I am no good at it in any case. 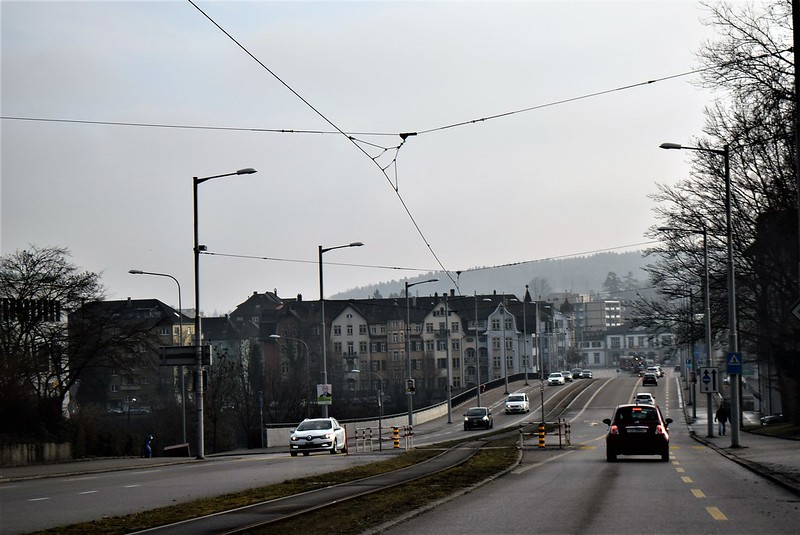 Let us have a random photo. I took it as were were crossing the bridge towards the other side of town, the station is at the end of the road. Actually the bridge is now about 10 years old. It was always there, but they had to renew it, so with Swiss precision they built the new bridge whilst the other still existed on the lefthand side. When the new bridge was finished they just demolished the old one – all a feat of precise Swiss engineering. Yes, we do not only make watches, but also bridges. I am not really sure how it was done because all the houses remained in the same place without being demolished.

Today is Sunday, another day of rest, although all days are days of rest for golden oldies. Now and again we do some housework just to show we can do it. I noticed the evenings now stay bright longer and the mornings also. I might even move for a walk in the afternoon. My camera needs something new for a photo, taking photos of the journeys to town and the supermarker can get a little boring now and again. Mr. Swiss has promised me I can drive home from the supermarket on Monday – big deal.  That will be the proof whether I can still do it, I have not been at the steering wheel for at least three months.

And now to explore other things, like how the vacuum cleaner works.