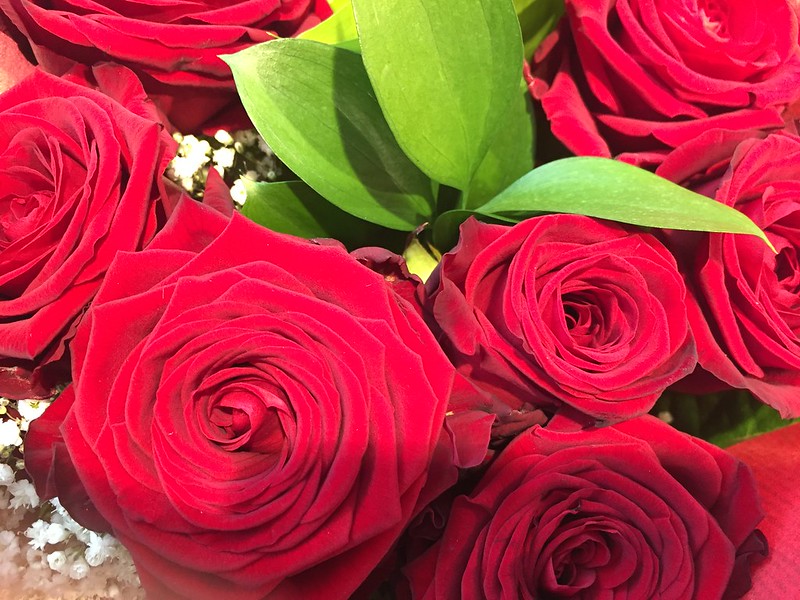 Who needs to buy roses when there are so many to photograph in the store. 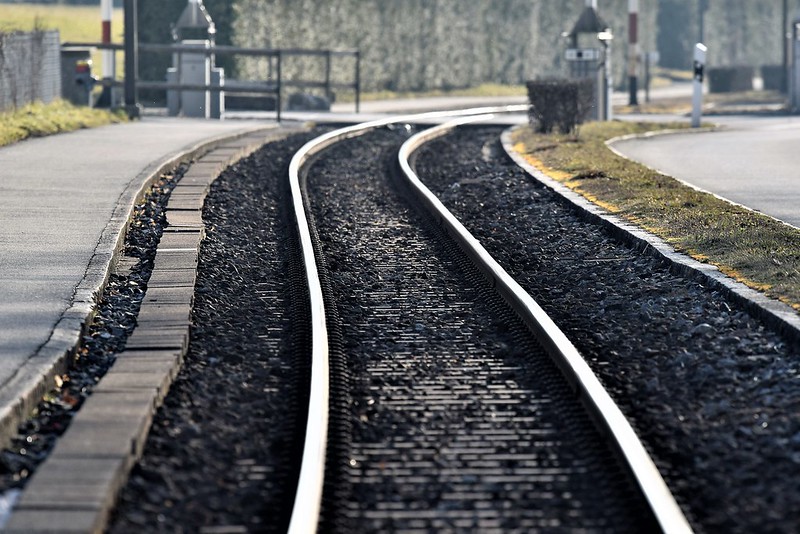 The local railway to town 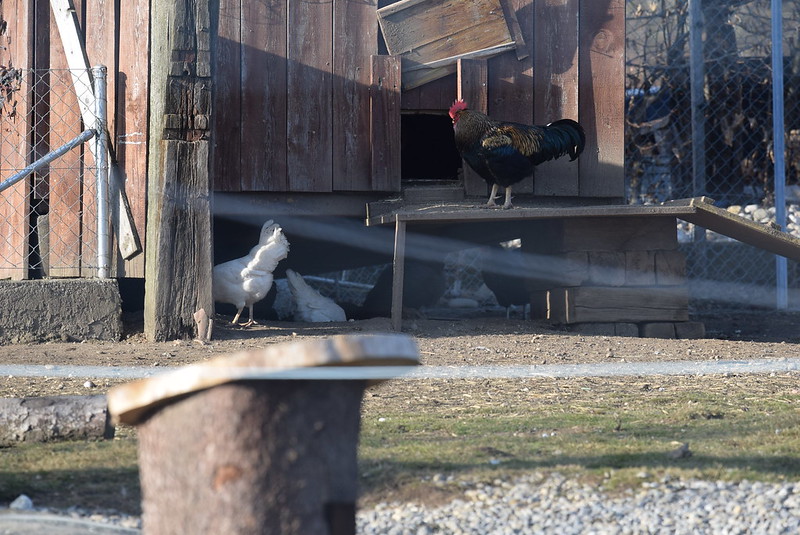 Even the rooster has his own way 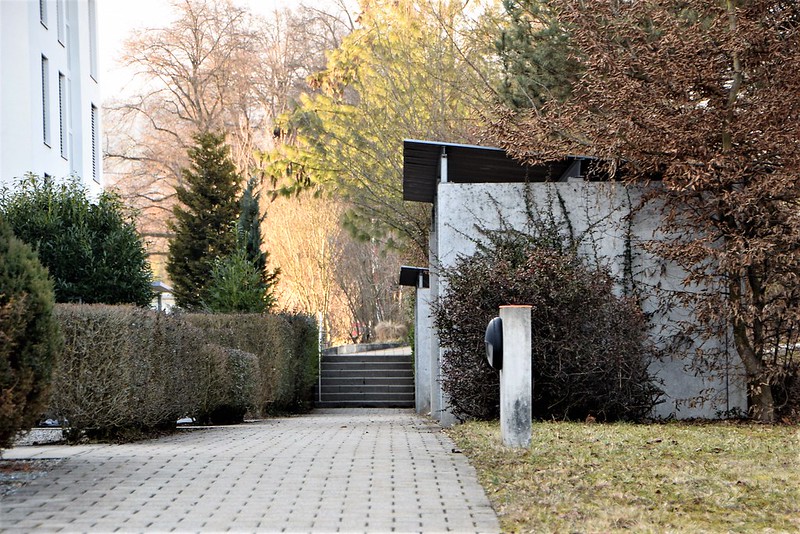 The path I take when leaving my home for a walk. 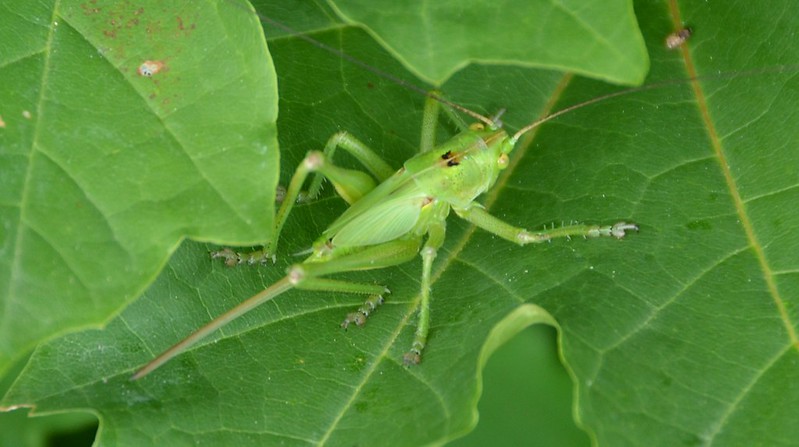 Well he is green, but am not quite sure if he is screaming. 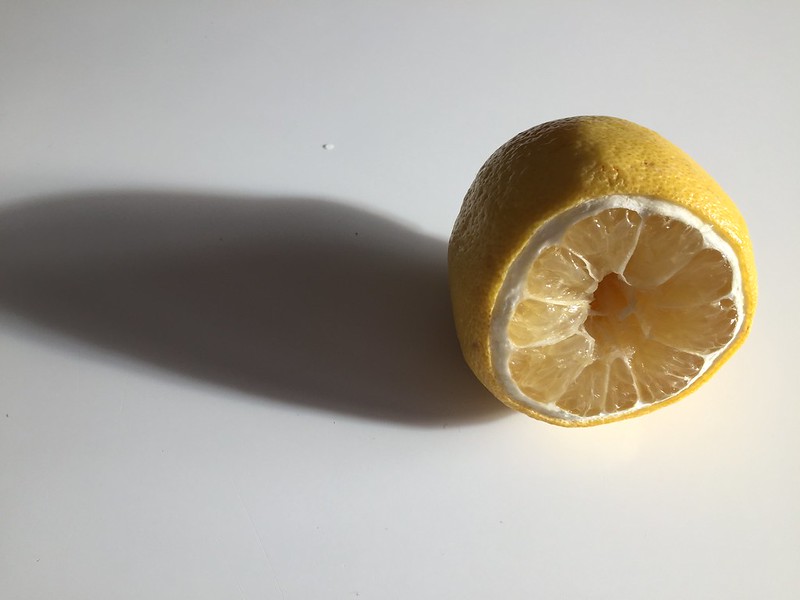 Not very imaginative I know, but like the people in WordPress, the only juicy fruit I had in the fridge was a lemon for a photo. Mr. Swiss always shakes his head when I awake from a golden oldie sleep at midday and begin to search through the appartment for strange objects to take a photo. The only piece of more or less juicy fruit I found was this lemon with part already removed. We usually have a lemon, perhaps even two according to the special offer in the supermarket, for a fish dish. It always looks good if you put a slice of lemon on the fish – real classy. I do not remember my mum ever doing anything like that when I was a kid, but then mum never went in for eating with the eye. Our fish came pure from the market, perhaps a chopped up eel, a kipper, or even a bloater.

Kippers are smoked herrings, which are usually red, and today are suspected of being unhealthy, even prone to causing illnesses which cannot be cured, because of the unhealthy substanes used for smoking. Bloaters are herrings in white, without the smoky part. They were quite bony, although not really a danger if you knew where the bones were situated, and often they were pregnant, containing a roe or two. Mum said the soft rows were female babies and the harder roes were male babies. I suppose she was right, she was the expert. I never did get down to the truth of the matter, but I quite liked them.

OK I am diverting from the subjet, but how am I supposed to write about juice when 20 words are enough. There are even people that complain about ignoring  the words of the daily prompt, otherwise we should not bother to do it, in which case I tend to ignore people that complain about ignoring the deep and interllectual meaning of the daily prompt.

I also found an orange which was forgotten an alone and lost in a glass bowl outside on the patio. I doubt that it is still as juicy as it was when it arrived, and I would date it around beginning January 2017 – the forgotten orange.

Otherwise the only juice I bother to buy is cranberry juice for its medicinal properties. Half a glass daily works wonders with the body’s waterwork sytem. It has an influence definitely.

We do not get fresh cranberries in Switzerland, but we can buy the bottled juice. It is more a thick syrup than a juice, but is very healthy according to doctor’s advice.

And now I have an appointment at the hairdressers this afternoon. She will not be serving any juice, but always offers a cup of coffee when I arrive. I do not drink coffee, so do not bother. I am a tea drinker generally.  I do not really go for juice, it makes a mess in any case. This evening we will be eating a toast hawaii – the toast with a layer of ham an cheese and a pineapple ring in the middle – that will be a little on the juicy side. 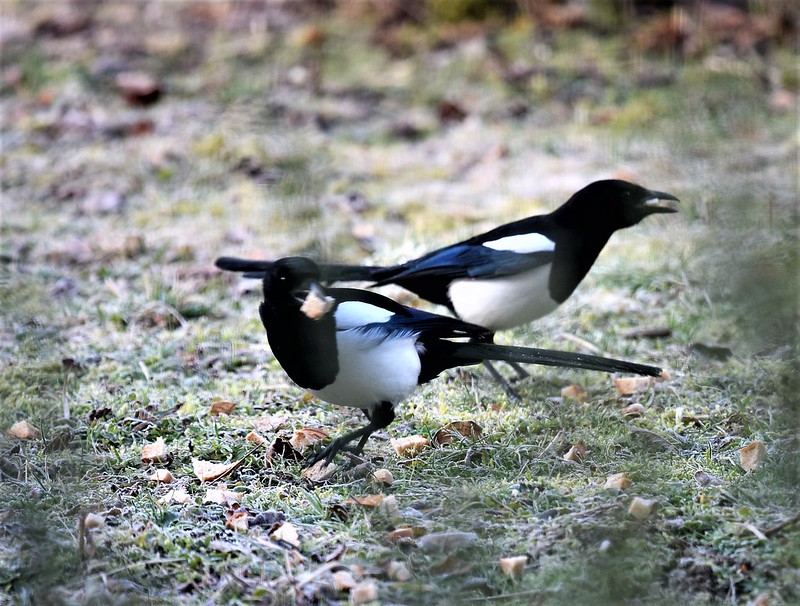 A normal morning photo after the bread has been deposited for the birds in the morning. The magpies arrive as soon as possible to have a good  choice  before the crows take over. Magpies do not have such large beaks as the crows, so only manage up to 2 pieces of bread at once. The crows are experts, they can carry at least 3-4 pieces. Afterwards they fly off. I do no know what they do with the bread, but probably had a special nest for food reserves.

Week-end shopping day today and Mr. Swiss did mention that I could drive both ways today. Perhaps he might have fogotten in the meanwhile, I hope. I have at last got an appointment with my hairdresser this afternoon and this time they are letting me out on my own with the car. Somehow I find this is getting a little too much with driving the car everywhere, but the popular idea is for me to get back into the routine. It was so nice to sit next to my chauffeur and take photos as he was driving. Now I do not even take the camera with me, although this afternoon I am in town and will see if I find something interesting and take the camera.

I have now begun to ignore some of the daily prompt subjects on WordPress. You get one word, and often I get no inspiration. How much of one’s private life can you divulge? Eventually you also run out of facts and I do not want to bring “fake news” which seems to be fashionable in some parts of the world today or write about something that has nothing to do with the prompt, which does not really bother me, but perhaps others. I decided to do my own thing, which may not be always interesting, but more interesting than writing 5-600 words about “squat” which was yesterday’s word. Golden Oldies do not squat, as in all probabilitiy they have to remain squatting until someone helps to put them back on their feet. Of course you can be a squatter taking over an empty house, but that is no longer fashion and aso I decided that squat was not an inspiring subject to write about. It now depends on the word. In any case I noticed that the pingback of this prompt was out of order for a few hours, so I did not miss anything.

And now I am moving to the daily chores. I have an appartment to organise from the day before, and I have to measure my sugar just before leaving for the shopping tour. The Swiss goverment now demands it from me, as I have reached the age of 70, have diabetes and must carry my sugar status with me when driving. I know it is silly, but it is the law and we all want to abide by the law. Those measuring plastics are not cheap, although my insurance does pay for 90% of the costs.

Time to go, enjoy the day. 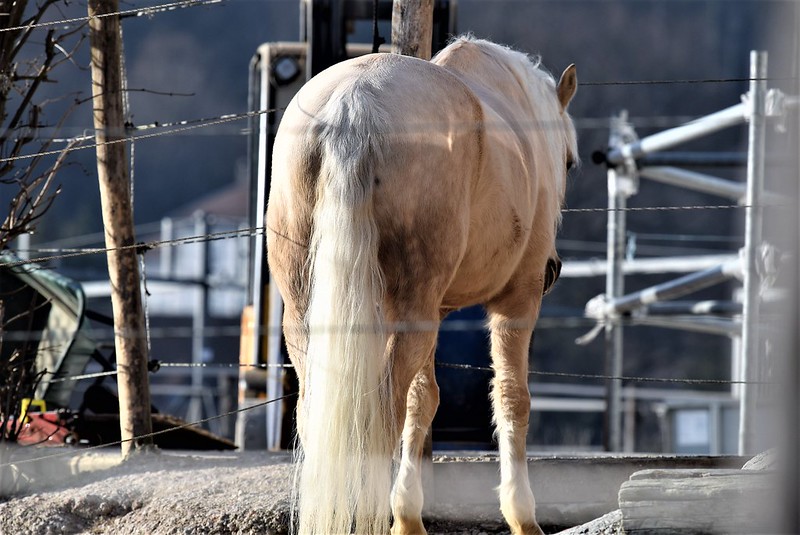