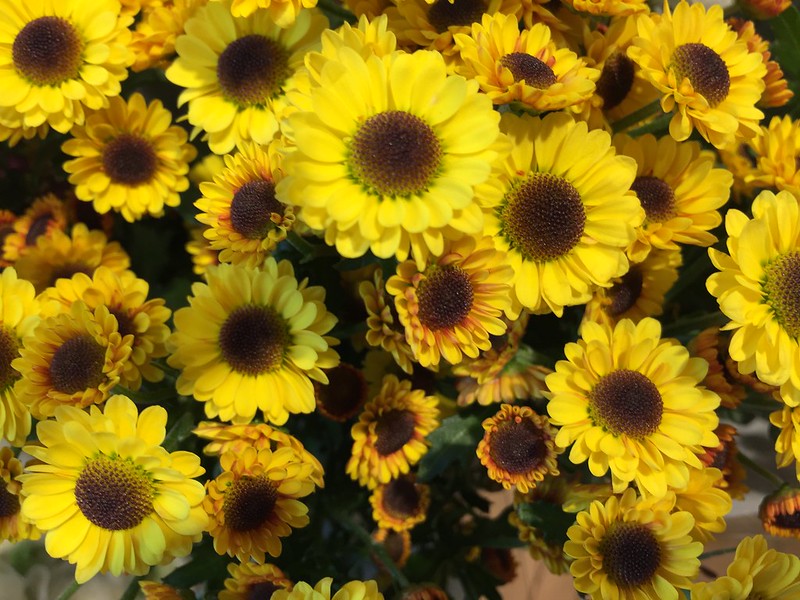 Some yellow to brighten up the day. 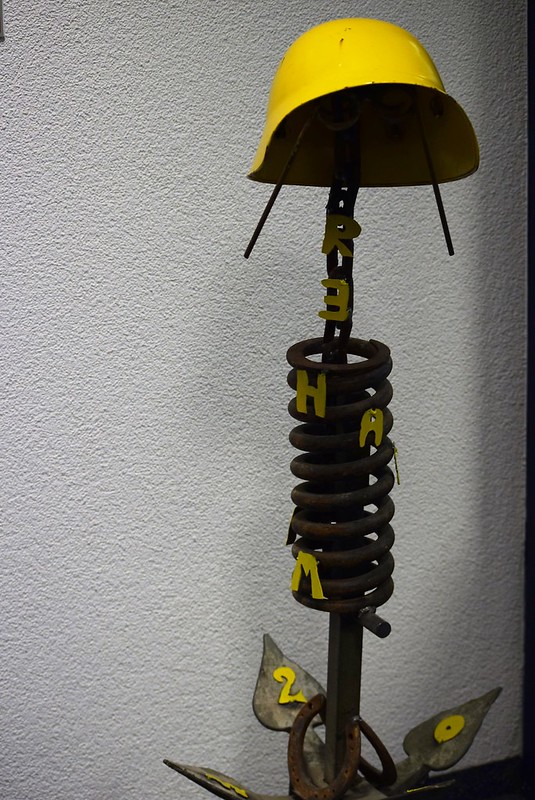 It is not a secret weapon belonging to the Swiss Army, but some sort of artistic form not being very mellow yellow.

Well it is not my condition as according to the definition in the dictionary it has two meanings, one being sexually attractive – golden oldies are past that, we are just perfect so let us remain in the garden with the lush surroundings. 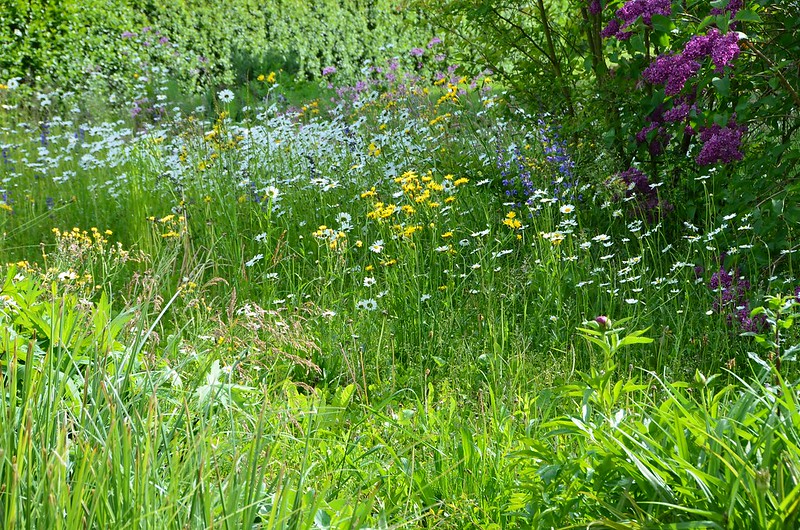 The other lush meaning can be seen in the photo.There is no room left for another weed or flower. It is rush hour in the garden and all the seeds are in competition with each other to see who makes a flower first and produces seeds. However, this all comes to an end on approximately 14th July when the gardener mows it all away. It is a space between my garden and the gardens on the other side, a so-called natural meadow where it is forbidden to cut the grass and the plants from the time when they begin to grow in Spring until they have spread their seeds some time in July, when the offspring of the original plants have secured their place for next year. This maintains the flower meadow every year. We once had a new neighbour and no-one informed him of this unwritten law and so he found he would help us all to mow it all away. I managed to stop him after half the plants had disappeared. They had not yet produced their seeds, but nature fights back and the next year the natural meadow returned. 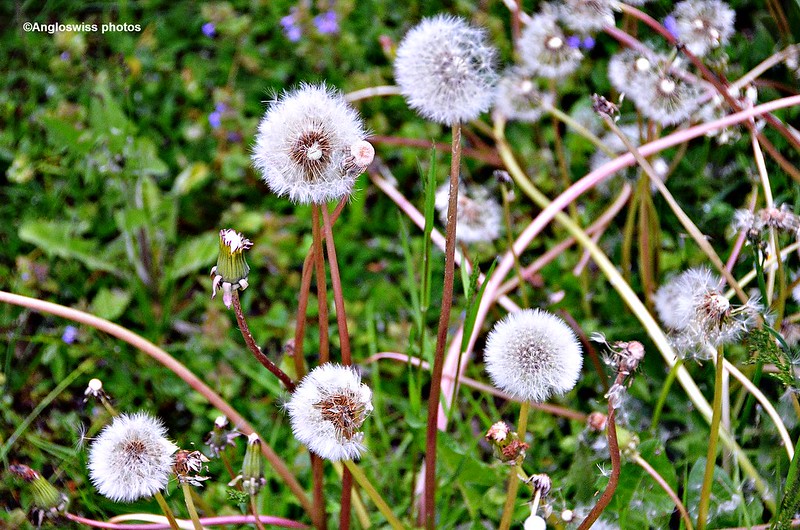 I do appreciate this outbreak of nature everywhere, but please without the dandelions. I know they have pretty yellow flowers, but they are very possessive. As soon as their seeds hit the ground they cannot wait. The roots awaken and the leaves begin to grow. Yes, the leaves which are very sly. They lay flat on the ground and suddenly the first stalks appear, not just here and there, but everywhere. In my pre golden oldie days I would attempt to remove them before they took over. I now just chop off the flowers when I see them, despite the screams and dandelions survive. If you do not evacuate them, they will be back next year, same time same place, and much bigger. Have you ever seen a dandelion root? It is not just a root, it resembles a monster turnip, with triffiidial aspects drilling down into the ground. If you want to pull it out of the ground, it pulls back – how many people have you watched being pulled into the ground by a dandelion root? Admit it, no-one wants to for fear of not being believed. Beware of the dandelions is all I can say. 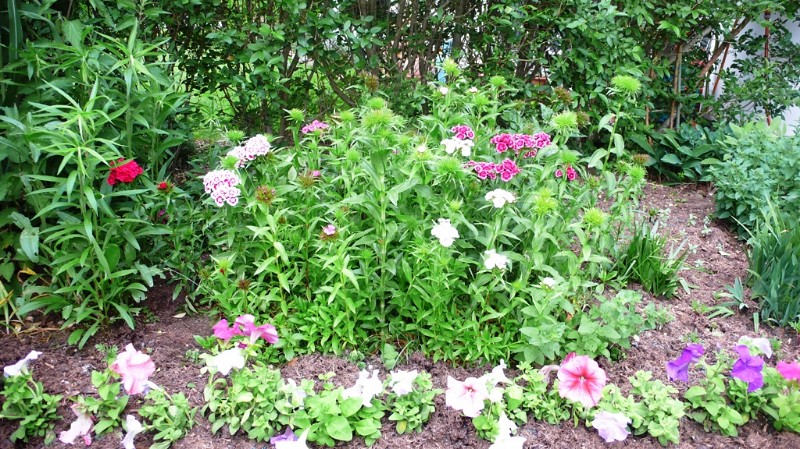 In my younger and more lush days I would attempt to do my own thing in the garden, guiding nature where I wanted her to be, but those days are now gone, we have a gardener and I keep it plain and simple. The annual plants had to go and I now stay with the perennials. Planting something new every year is no longer my thing. 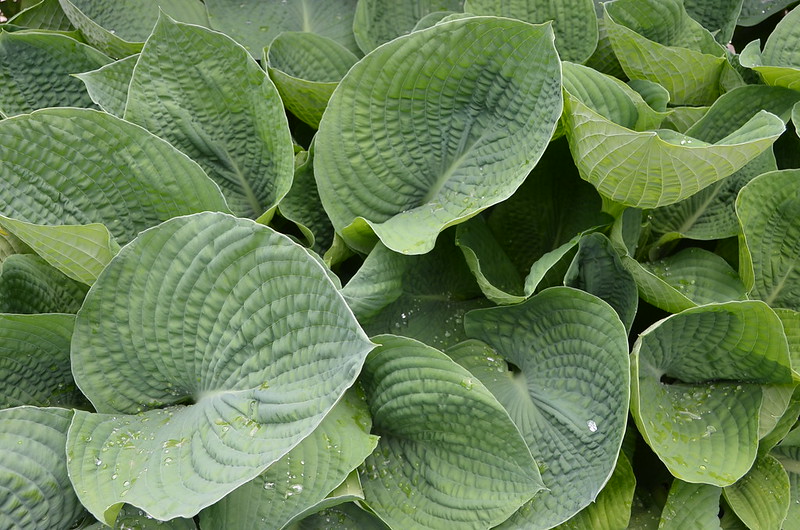 I had monster hostas last year, even the gardener was astonished. It all happened after that night when there were strange lights in the sky, and they just grew that way afterwards. Now and again they talk to me, even the spiders avoid them. My cat will not go near the hostas, but keeps them under observation.

Daily Prompt: Is lush a condition? 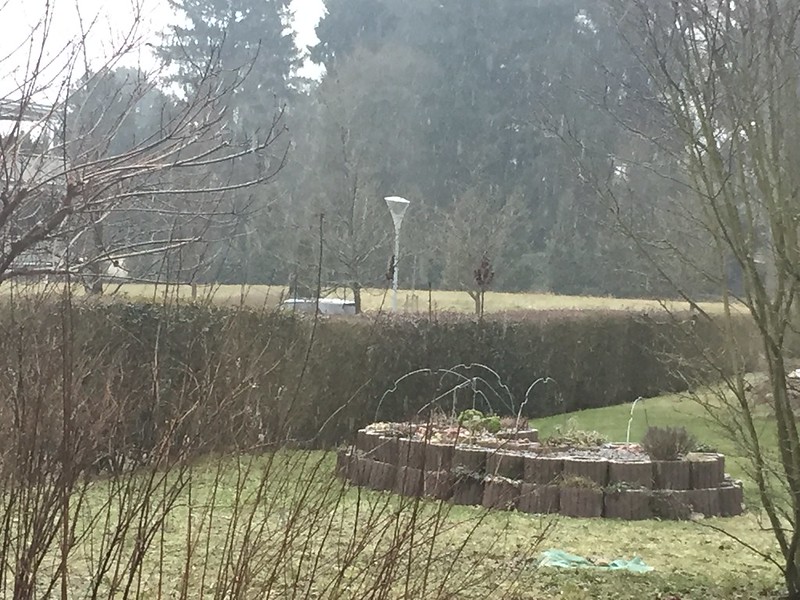 It is not a dirty mobile telephone camera lens, but it began to snow which tends to distort the photo: nothing special or a blizzard, just very fine snow flakes which could become something bigger if the cold  temperatures remain and the snow continues. We have been expecting it for at least two days, but the Swiss like to be careful with their predictions and warn people ahead.

Today is one of those days where they let me out to do some week-end shopping. We have re-organised the menue twice already. No. 1 son decided to take a day trip to Geneva on Saturday, meaning that Mr.Swiss and Mrs Angloswiss can have a candlelight lunch together, problem being the candles do not look so good at midday on the table. We decided on something quick, good and fried, like a steak, but we wanted the steak on Sunday: oh, the decisions of life. We will now wait and see when we get to the supermarket. Perhaps they have a special offer for something. 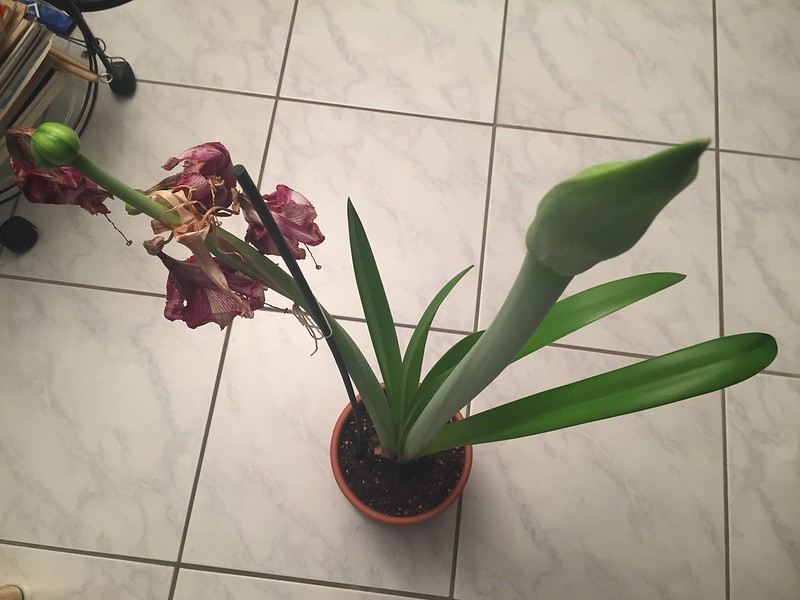 I decided it was time to show my amaryllis again.one of the wonders of nature. It flowered some time at the beginning of January and I took a few photos. I left it in the pot, thinking about what to do with it. It is so long that I had an amaryllis I had forgotten that they usually make two flower stalks. I saw some leaves appearing and in the middle a bud began to poke through. The first flowers have long wilted, but I decided to leave them, even dead flowers have their fascination. The dead flowers have also developed quite big seed pods at the base of the flower. So my new flower bud is growing fast and furious. One of the wonders of nature and all that jazz. I have now discovered an internet site where some guy explains how to look after your amaryllis and get it to flower again for the next year. I might try that one. I could perhaps even write a book about it – “how to resurrect your amaryllis from the remains of the year before”. You have to choose a dynamic title for a book otherwise it will not sell. 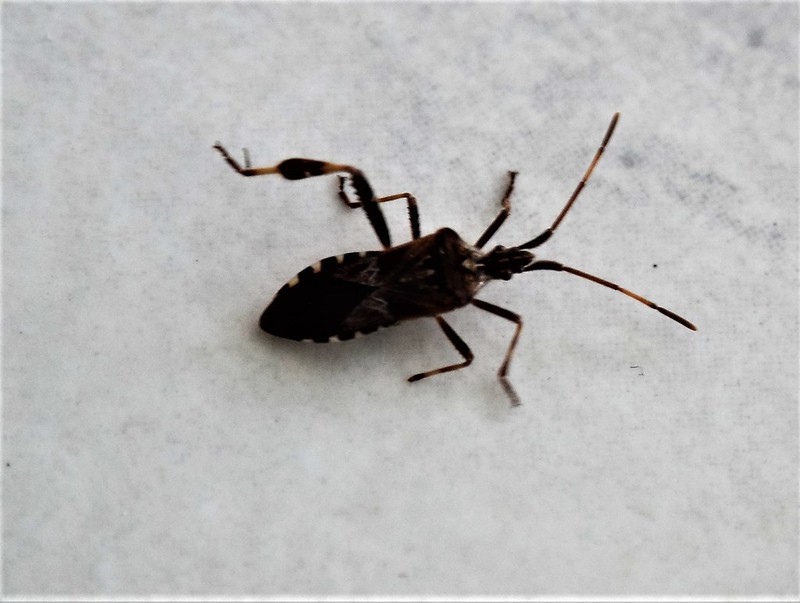 Talking of nature, I was cleaning windows yesterday morning and this little guy decided to appear from nowhere and take a walk across the floor. I had a choice, either kill it or take a photo. I decided on the photo and named it “unknown bug”. Within half a day one of my fellow viewers on Flickr sent me a short message telling me that this was an example of the  Leptoglossus occidentalis, in plain english a western conifer seed bug. In planer english, a stinkbug. Of course, I should have recognised him, although he is a refugee from another country, the USA, arriving in europe in the late nineties. These invaders should really be stopped and their documents taken way: sent back to where they came from. We have conifers in our forests, far too many, and I can now imagine a complete invasion of the unwanted invaders. In the neanwhile mine is now hiding somwhere outside. I did not notice he smelt, but I did not get close enough.

So time to go, I have a plan to keep. Even we golden oldies have to have some organisation. You cannot just sit on a computer all the time, at least not until the afternoon. Although this afternoon I have my doctor’s appointment for the idiot test to see if I can keep my driving licence. Everyone seems to think it will be a walk through, but I am prepared for anything.

See you around on the flip side.