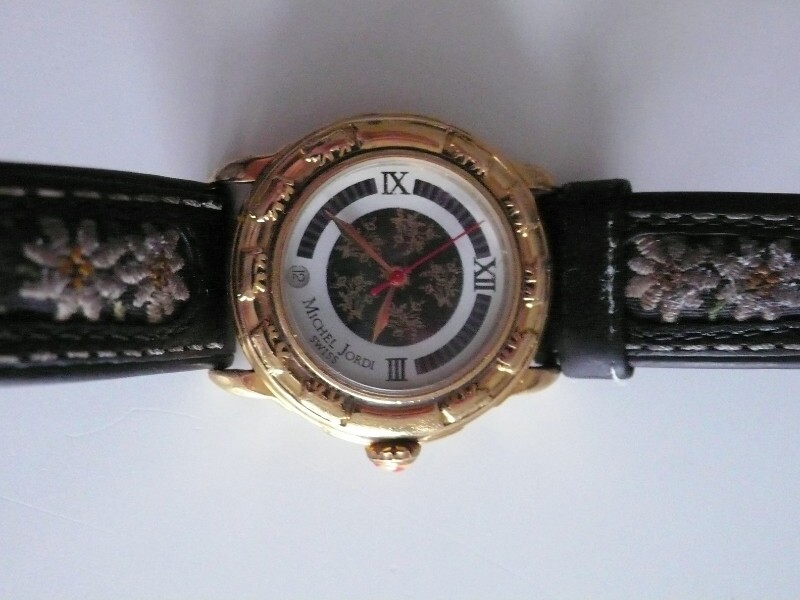 If you are Swiss, people always noticed what sort of watch you are wearing and so I joined in with the watch wearing brigade. And then the Michel Jordi watches arrived. I loved these watches. The designer made one for each Kanton in Switzerland and I knew this was the watch I wanted and so it arrived one Christmas in its box, from Mr. Swiss of course.

Although I live in Kanton Solothurn, the local watch design did not appeal to me in the colours of red and white and so mine was featuring the emblem of Kanton Schwyz. Each of the watches had cows embossed on the edge and on the back of the watch was the Swiss National flag design. Even the watch straps were in a Swiss design with edelweiss. Over the years I had to have  new batteries and it served me for many years and there were also many new straps: once a red one, then a blue one, but I like the black strap most of all.. The day came when Michel Jordi no longer made these watches, there was a problem with bankruptcy,  but I was still able to have it repaired or get a new strap

And now my watch is no longer being used. Yes, the electronic digital age has replaced wearing watches and I have my iPhone. But I still have my original Michel Jordi watch in its original box: a memory of days when watches were still worn.

And here is another example of a Swiss watch with the emblems of all the Kantons. I bought this one when travelling by Swissair from London to Switzerland. They were only available on the flights, a special manufacture.

If you are Swiss and live in Switzerland someone tells you the theme is “Watch” then you talk about watches.

10 thoughts on “FOWC with Fandango: Watch”