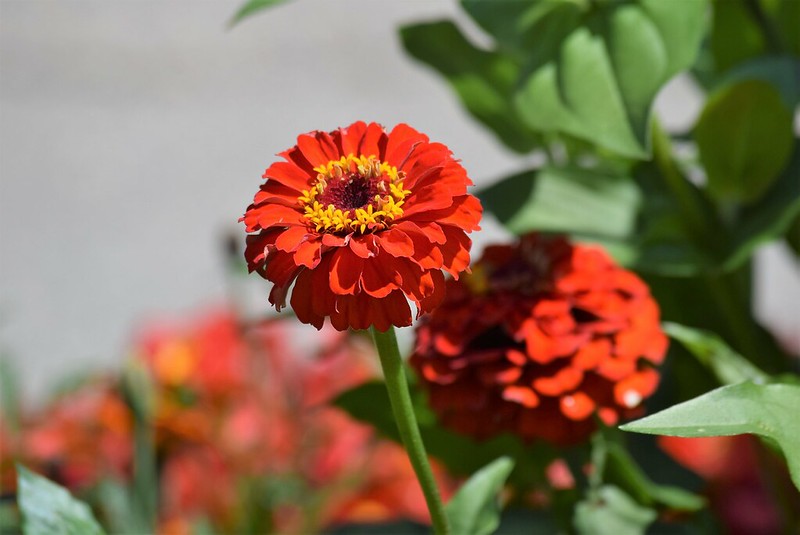 At least I think it is a Gerbera. No, it isn’t, but a Zinnia. 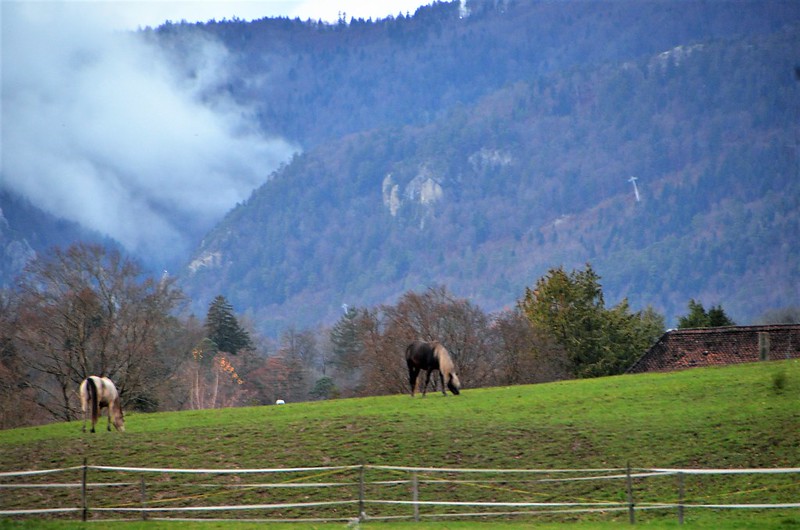 Like the horses in our village, I have regained my freedom. My many years of housewife prison and working are over, but I needed time to really realise and enjoy it. After the first days of retirement I had to find my way. So many things have changed since then, things that we do not imagine could happen.

We are both in the grey hair group now, if you still have hair (ask Mr. Swiss). Some golden oldies can still move, go on adventure holidays and discover things they missed out on when they were younger. We have to make the most of what we have. I have my freedom with an electric wheelchair and as I said yesterday, I am driving a car again and enjoying it, which I never thought I would. It is as if I have a new project to realise and have discovered there is still a life out there.  It is an adjustment in life.

I just spent the last half hour, with Mr. Swiss, talking to my son and daughter-in-law and watching my grandson. I can no longer travel so far, or Mr. Swiss. They live 200 kilometres away on the Swiss-German border, but with a phone you can do everything. The video conference is one of the new aspects to use. We talked over the loud speaker on the telephone, I could take photos of what was happening, especially of my grandson, and it was as if they were in the room with me. That is the freedom I now enjoy. Oh thank you world of communication. 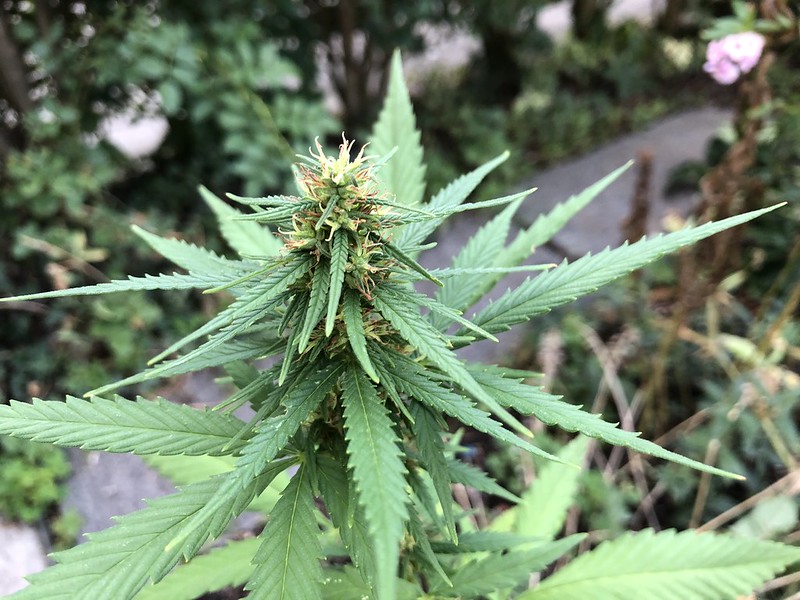 He tried sniffing glue, but that was a stress
His hair stuck together in a gooey sticky mess
The dreams were tangled in a labyrinth of fibres
Confusion was complete, too many dividers
The next inspiration was trying marijuana
He then got lost in a land of nirvana
Dreams are elusive and drugs might not work
But he never gave up even if the body did jerk
And so he tried mushrooms, the ones that were magic
The result was a headache which got very tragic
And then he discovered the ultimate key
The final solution was LSD
This was the answer and he now had the knack
He went on a dream trip but never came back

Just to add the plant in the picture, cannabis, was in my garden and no I do not grow it. It grew alone from some bird seed. But I kept it all the same. You never know, and it was a female, the nice bushy ones. Sweet dreams everyone. 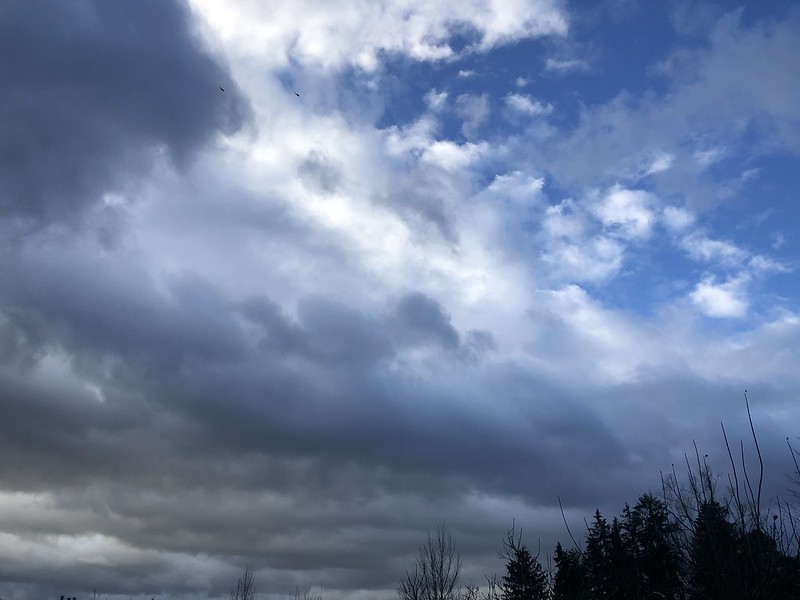 Now that was a stormy night with high winds. The good thing is that the winds moved the clouds and this morning, although quite cold, we have some blue sky. The storm clouds are still lurking at the side.

Yesterday afternoon I did something completely different and for the first time in many years really enjoyed a visit to the supermarket. 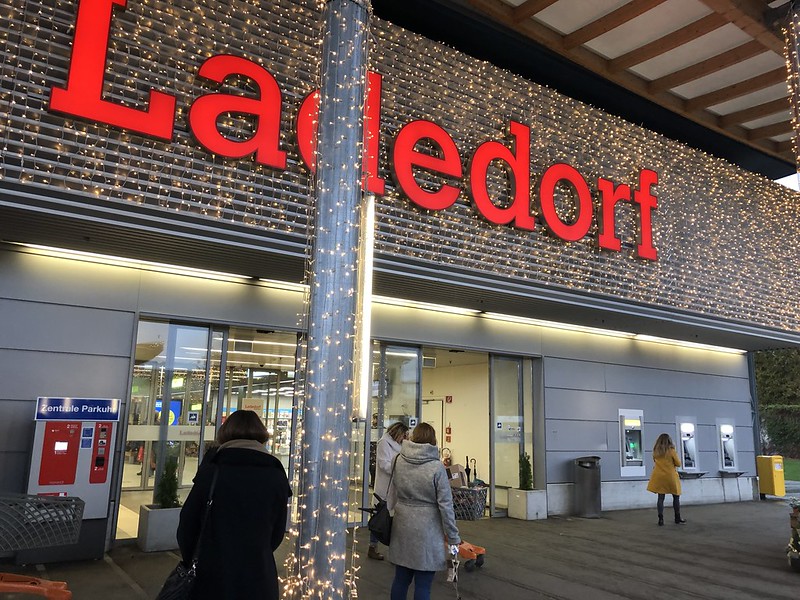 It was a dismal day with constant rain, meaning that when I arrived in the store mall it was in full lights. One of the treats of Christmas are the lights. I do my week-end shopping on Friday and when I forget a few things, Mr. Swiss gets them on Saturday morning, but Mr. Swiss no longer goes anywhere very much and so I decided that I will get the necessary in the afternoon. Our store is now open until 5.00 p.m. which gives me plenty of time. As I did not need so much I decided to take my walker with me instead of having to use the supermarket trolley. I managed to put it in the boot of the car and I was off.

When I arrived there was 0 parking places showing as free, but I decided to see if there might be a place for the handicapped. I drove past a column of about 6 cars hoping for a space at the end  discovered that all spaces were free. This was ideal. I removed my walker from the car boot and entered the store. This was ideal for me and I enjoyed every minute of my shopping. Of course there were many people there, but it is a large space in the store, and I wasalone and could do my own thing. I never thought that shopping  could be such fun. I had no stress, had a few items to pick and buy. I even enjoyed seeing the people. After the task was completed I folded up my walker, put it in the car, and drove home. It was now dark, but no problem. Traffic was not a lot on the road and I arrived home OK. I should do this more often I discovered. 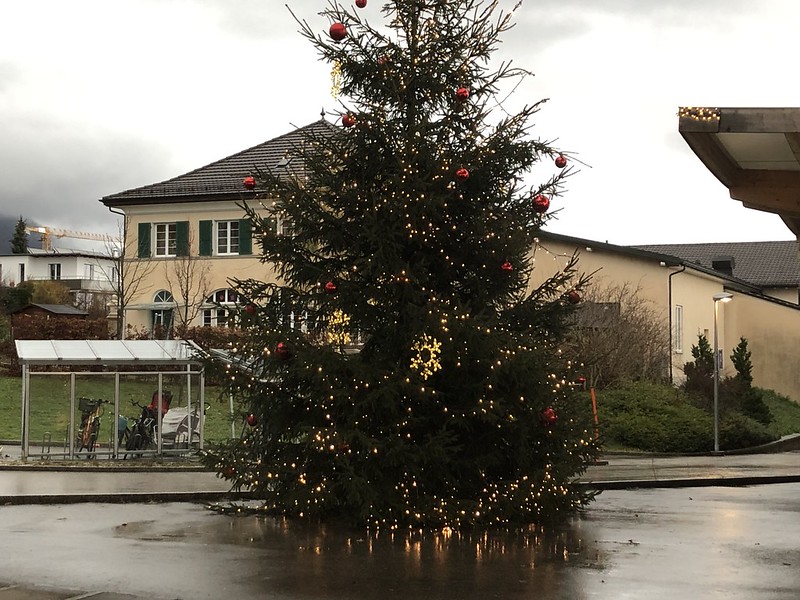 Even the store Christmas tree was showing its best with the lights on. I have not been out so late for a long while.

There was only Mr. Swiss and me at home as No. 1 son was off to Zürich for his Jethro Tull concert. I heard him arrive home about 1.00 in the early morning. It was all organised with a coach.

I should really now get busy with some housework. I had a few things to tidy up on the computer this morning, looking through the nightly visits of my online colleagues. If you are in an international site, it seems that the world never sleeps. 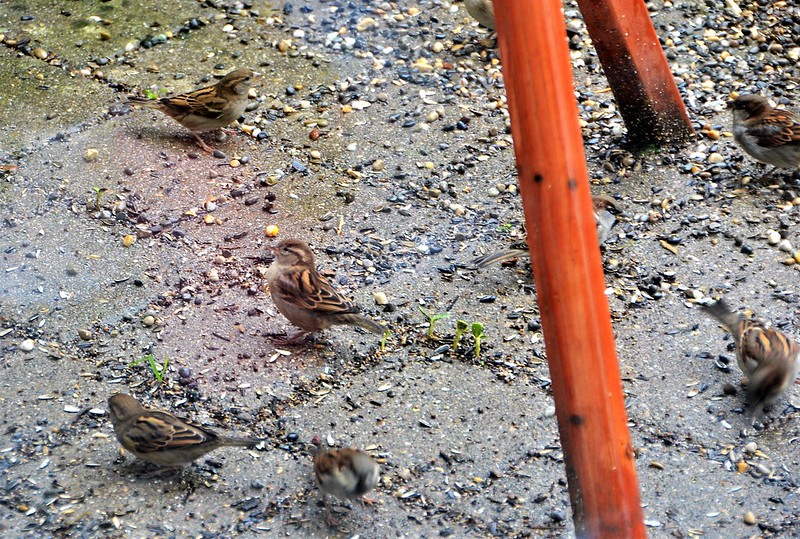 And at last I got a few photos of the local sparrows. This group was picking up the remains that had fallen from the birdhouse. 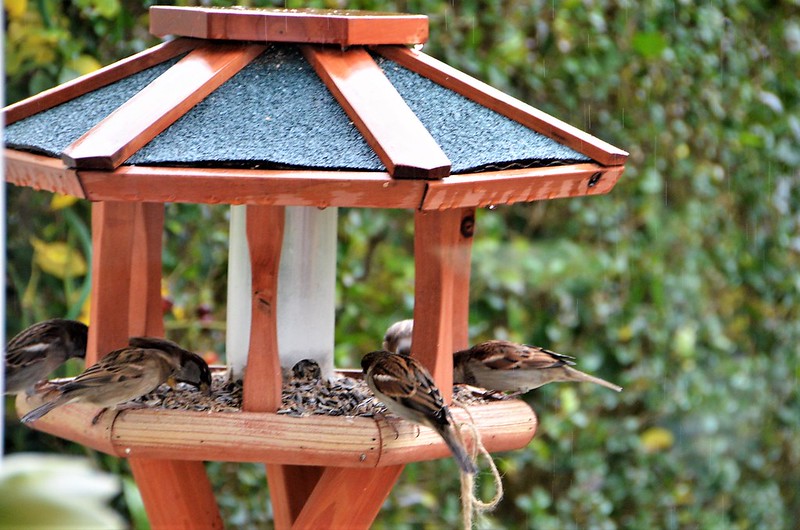 There is quite a lot of bird traffic during the day, but the rush hour seems to be towards midday when they have a group get together. We used to get finches and colorful great tits with their yellow breast, but this year I have only seen a tit once. The sparrows have taken over. 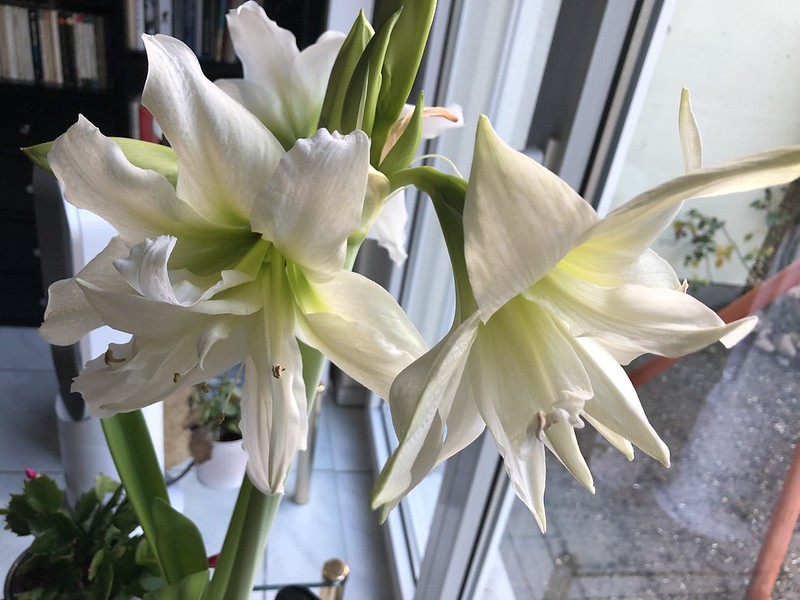 And a further installment of my amaryllis where the second stalk also now has flowers. Now I am approaching the danger of it losing its balance, so I have to keep a careful eye on it.

Who knows what the day will hold. I might even venture an outing this afternoon, but perhaps the wind will have to get less before I go anywhere.

I hope you are all keeping well wherever you are. Take care and I will see you around, or on the flip side as some say. 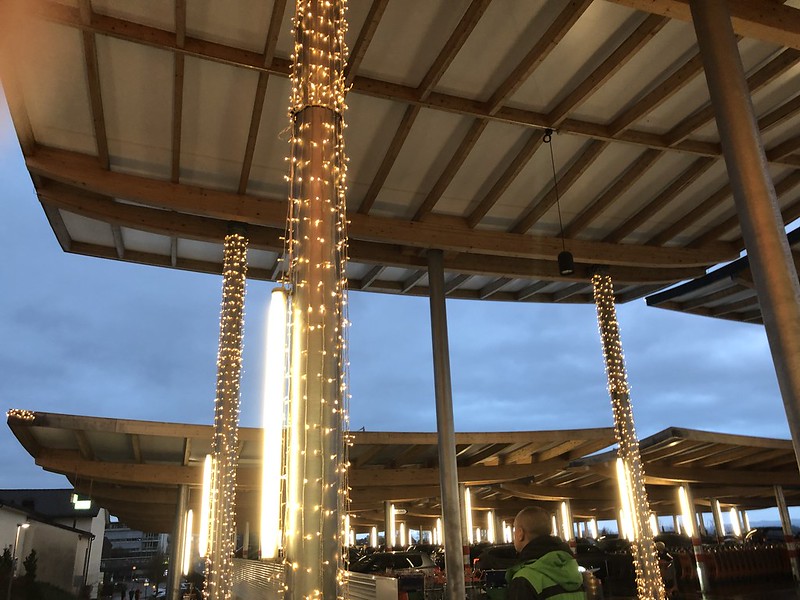