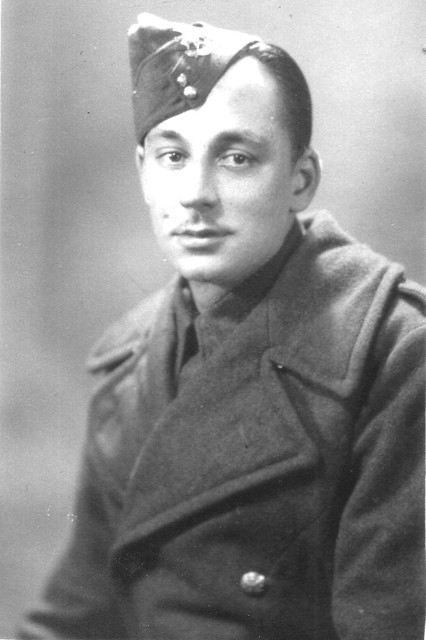 Today is so-called memorial day where memories of the fallen are re-enlived. Flags are flying on the various military cemeteries and there are speeches being held and ceremonies being enacted. It is an American celebration. We never had anything like it in Great Britain, although 11th November is always celebrated as the so-called armistice day to commemorate the fallen in the last two world wars and the end of the war. World wars? Yes because the whole world was involved. Even neutral Switzerland had her soldiers at the borders to protect their own people.

My dad was no hero, but no-one asked him to be a soldier. He was given an order by his country to appear at a certain time and date to enlist in the army. He was a young man, but orders are orders and he eventually found himself on an  amphibious craft landing on the beach at Salerno in Italy according to his story. He learnt to love Italy, the wine and the country. He found it a shame they were at war. He also got to see Egypt with the pyramids and sphinx and  a country that he always called Palestine, although it eventually became Israel. Dad was one of the old school and names never really changed for him.

He told us of being in an army cantine in Italy when Beniamino Gigli, the great Italian opera singer, entered with his daughter and sang a few arias. Engish soldiers were enthralled, although not exactly opera fans, but this was something different to patrolling in dangerous areas. During the Gigli concert the military police locked the doors and inspected the soldiers papers that were now trapped in the cantine. Dad said there were many arrests made that day for deserters.

He told me of marching in Italy when the ground suddenly caved in and below was a wine cellar containing the farmers store of Italian wines. He said there was not a sober man in the regiment after they found the liquid treasures.

He was heading for France, Paris, when the war ended and saw the Eiffel Tower. Their money was allied money, in billions due to the inflation, but they were not rich. According to dad’s stories of war, you could imagine it was one big holiday for the british soldiers.

It was only when I was older, married and had children of my own, that he would tell me about a march where some of his colleagues trod on a mine and were killed in front of him. About when he was climbing a mountain slope in Italy and German snipers were firing with their rifles. He said luckily they were climbing with mules and could hide behind the mules as they were being fired upon.

My dad’s only war injury was when he dropped a shell from a gun (he was in the heavy artillary) on his foot and was lucky that the ground was soft mud and his foot sank into the mud instead of being crushed. He had a couple of malaria attacks in Italy and said that is not an illness he would like to go through again, shaking from the bouts of fever he had.

Dad came home on a Friday, was married to my mum the  next day in his army uniform because he had no other clothes to wear. He had only seen mum for a few hours one evening when they met in an english pub whilst he was on leave. Their romance developed by letter. This might not be the story of a war hero, but my dad was my war hero: Albert Stanley Relf 1915-2016. 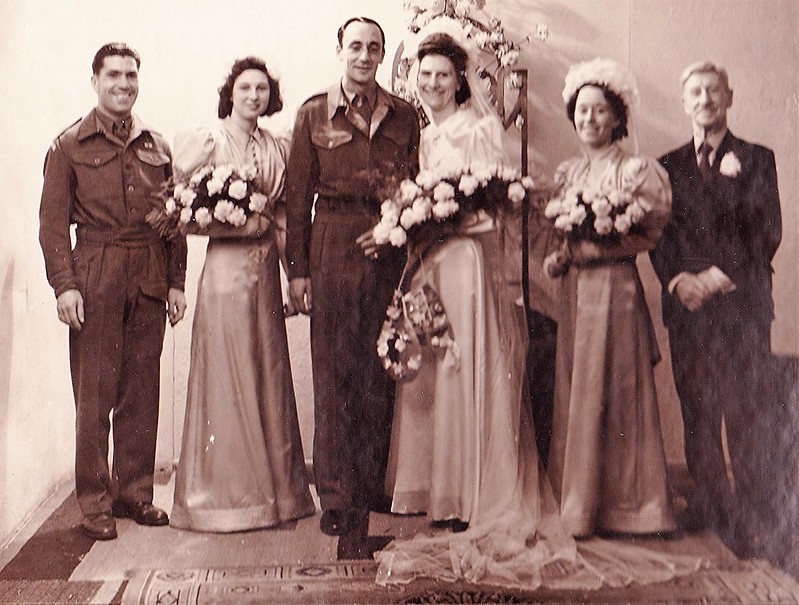 Mum and dad’s wedding photo. Her brother on the left, also in uniform, returned home after 4-5 years prisoner of war. On the right my grandfather, mum’s dad. Second on the right my mum’s sister-in-law and also school friend who married mum’s brother. The other lady is a friend of mums.