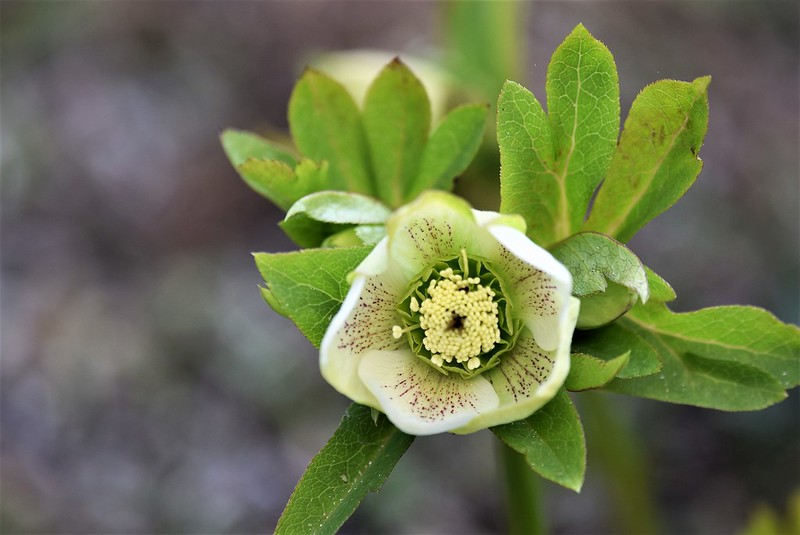 This is my very own Christrose that is now flowering in my garden. I was so pleased and surprised. Last year I noticed I had one. I remember planting one and last year it appeared. This year there was no trace, as they usually begin to flower at the end of December, beginning January. I have many Lent roses, which are the same, but pink (Helleborus). This week I saw that my Christrose had returned and this flower was the first, standing upright waiting for a photo. When I looked closer I saw that the plant is full of buds, so I am anticipating the remainder. 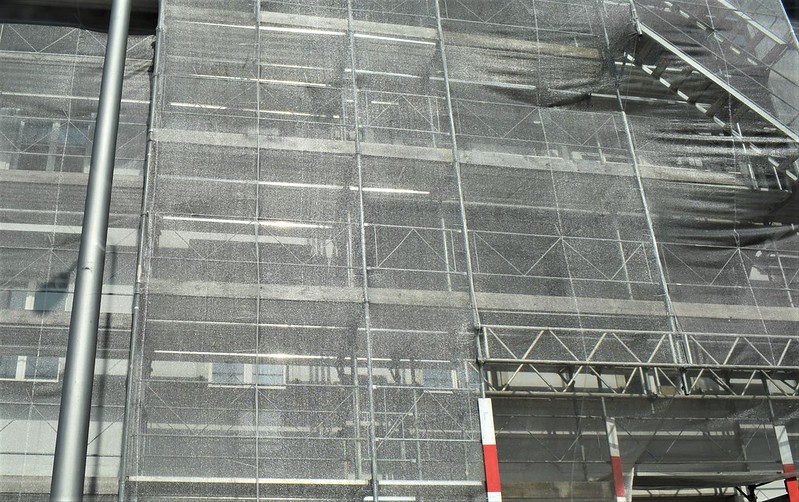 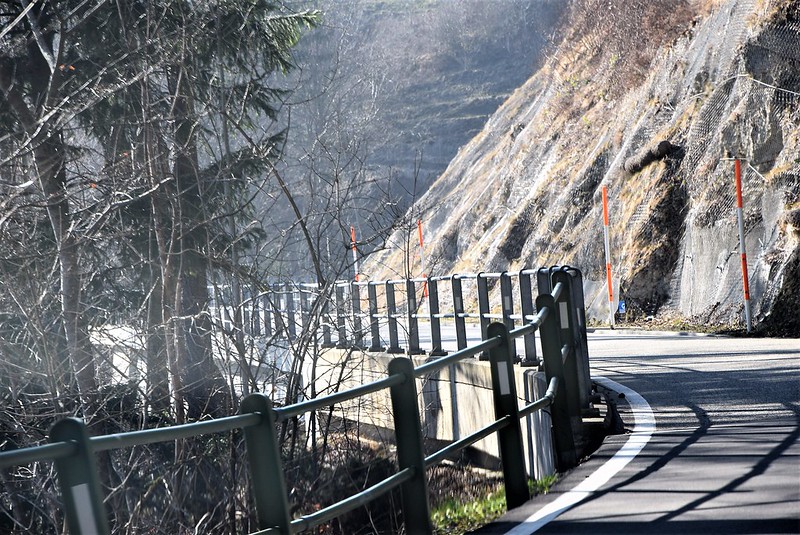 Driving up mountains in Switzerland (Balmberg) is always a curvy thing. The long orange and white posts are left during the Winter to mark the road in case the snow piles up high, then you always know where the road should be. 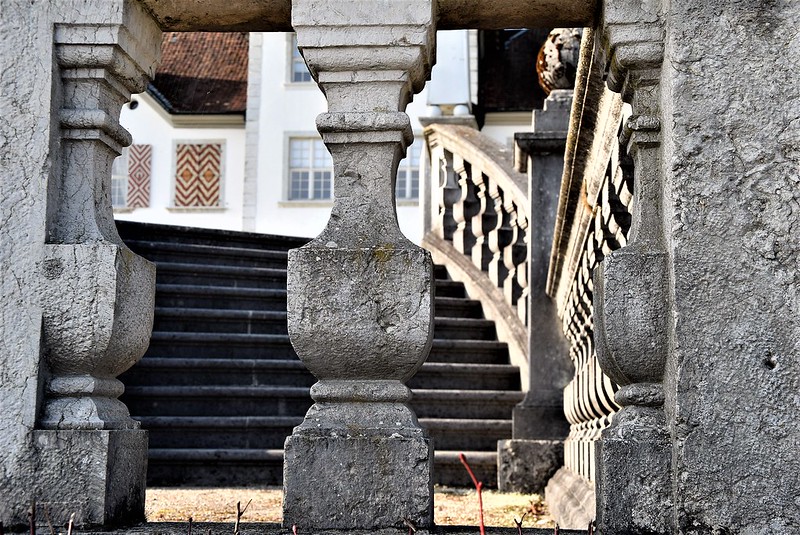 The local castle Waldegg, in my village, also has a few complicated ways. 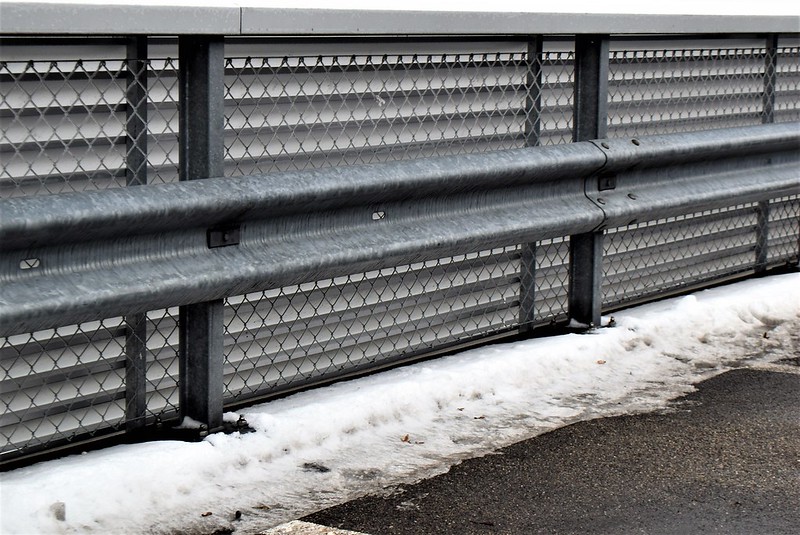 It all looks grey to me. 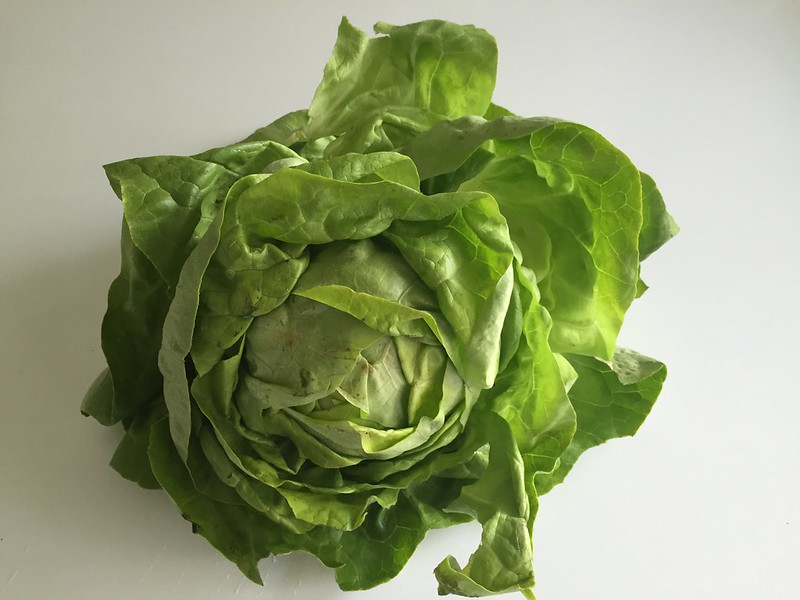 This is a head of salad and it is the way I buy it. Our supermarkets now decide to sell the salad already chopped in correct sized pieces, washed and in a plastic bag. Ready prepared salad costs more, of course, but it is time saving. You do not have to wash it and make sure there are no living objects left in the salad. All it needs is a salad sauce and everything is ready. You can even buy ready made salad sauce in various varieties. I do neither. My salad looks like it grew somewhere, I wash it and cut it myself. I was reading an article in a Swiss online newspaper today. It was the headline, and it was all about what might be included in the plastic bag with the salad leaves.

I do not buy this kind of salad, as the country of origin is not Switzerland, and a ready packed salad travelling by plane or train or lorry to switzerland is not my idea of fresh, even if it is refrigeration. So what did the lucky buyers of this salad find.

The bag of ready cut salad was taken from the fridge and suddenly her husband noticed that the plastic bag moved inside. After a further examination a living small frog was discovered sitting amongst the chopped salad leaves. The salad had been in the fridge for two days, before being used and probably the frog had been happily munching through the chopped salad leaves before it was discovered. Naturally the salad was returned, together with the frog, to the shop where it was bought. As compensation the customer was offered a new salad, free of charge of course, and chocolate. The staff of the supermarket chain said that the frog must have hidden itself between the salad leaves when it was being washed, otherwise it would have been found.

In another plastic bag of ready salad a customer found a gecko, a sort of small lizard. This lizard lives usually in Spain from where the salad originated. This time the customer decided to keep the gecko, gave it a name, and it now lives forever after in the customer’s home. He was a lucky gecko. I do not what happened to the giant grasshopper that another customer found. He probably hopped away. The case of the dead mouse will no longer be explained, he was probably not a vegetarian.

So beware of the salad you buy. You might be lucky and find an invader that would be worth keeping as a pet. I had to laugh at the remarks made by the readers of this article. One found why bother to return a living frog together with the salad to the supermarket. For the few francs the salad cost is would not be worth it, and the frog should have been released from his unpleasant state into the places where frogs like to go. Most of the reactions on this piece of jounalism took the side of the poor trapped animals.

Yes some frogs, geckos and grasshoppers are lucky in their choices of where to live, and others just have to hope that their luck will hold out when discovered.

Daily Prompt: The Luck of the Draw 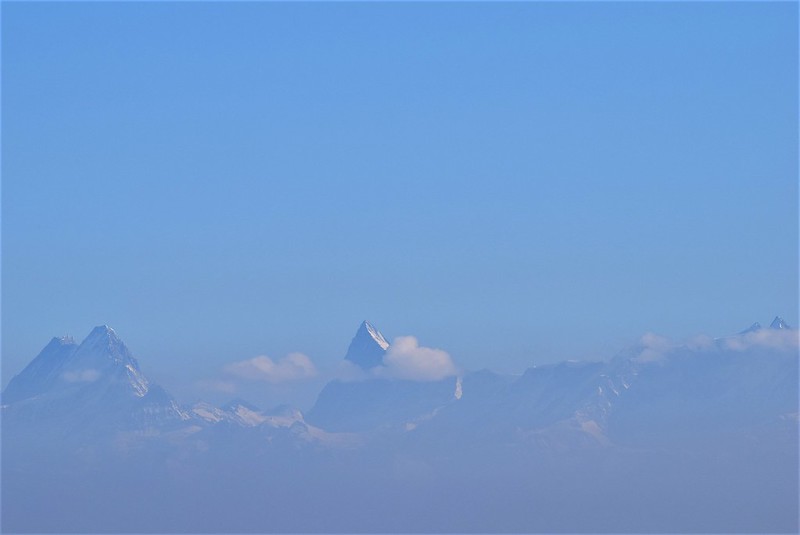 Not the view from my garden, unfortunately, but from a mountain near where I live looking towards the Bernese Alps. Yesterday we went for a short drive and a longer walk up in the highlands, just behind where we live. It was wonderful weather, and we had the place almost to ourselves. There were few walkers on their way, more cyclists.

Today I will be recovering from the exhaustions. I spent about 2 hours uploading photos yesterday, naming them and sorting them. Mr. Swiss also made a contribution so we were busy. In between I ate something for the evening meal and afterwards continued with bloggy stuff. Usually I am finished with the computer latest 8.00 p.m., although I am not going anywhere or doing anything else in particular, but I like to get the job done with. Mr. Swiss called me if I wanted to see my favourite TV soap, East Enders, which is all from the area where I grew up. I told him to get on with it, blogging first. Just as I was putting the finishing touches to my promp(s) of the day (have to write for my feline on her cat blog as well), there was a ring at the door. Knowing that the postman only rings twice and it was evening, I realised it must be someone else.

Mr. Swiss opened the door and there stood son No. 2 who does call in now and again, only living a half hour train journey away. The problem was now solved temporarily with East Enders, but I shifted my computer to the living room where I could partake in the conversation, whilst finishing a couple of routine jobs on the computer. Mr. Swiss and son had a couple of political discussions, so I decided let them get on with it and I got on with my stuff. I was just finishing when No. 2 son had to go, he had a train to catch. We were now ready for the East Enders, although I get annoyed everytime I watch because the scriptwriters never write what I actually want to see.

Today is another nice sunny day, so I will probably be on my way again this afternoon, but locally. This golden oldie has had a little too much stress lately. 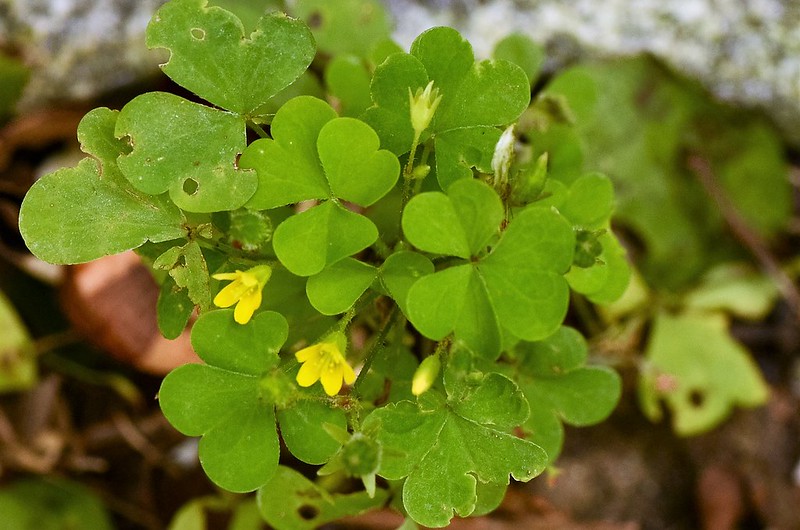 Today is St. Patrick’s Day it seems, so I found a photo of shamrock in my records. The stuff grows everywhere here during the summer months and I have spent many back breaking minutes removing it: perhaps we have leprachauns at the bottom of the garden.

And now to move on, it will be a busy day today shopping and at some time I will be at the steering wheel of the car to make sure I keep in the routine. Yesterday Mr. Swiss did the driving up and down the mountain. I could have done it, but it is not so advisable. It is quite a good road for a mountain road, but not very wide and with many curves. There is a bus that goes up and down the mountain about once every hour and it was our luck to cross paths on the way down. However, there was enough room with a few centimeters to spare. I was glad to arrive home eventually as taken photos from the car on a curvy road is not exactly the ideal: something like a ship on a rough sea.

And now to attend to the daily chores, you just have to love them. In the meanwhile Mr. Swiss had a disagreement with the vacuum cleaner as the dirt container opened and spread its contents on the floor. He was using the portable Dyson where this seems to be a integrated mistake. The big Dyson never does it. I was occupying the electric plug to upload my iPhone, so it was all my fault I suppose.

We all have our obstacles to overcome during the day, and I dare say there will be more on the horizon, but I will continue in spite.

Enjoy the day, tomorrow is week-end – a word I have almost eliminated from my vocabulary since becoming a retired golden oldie. 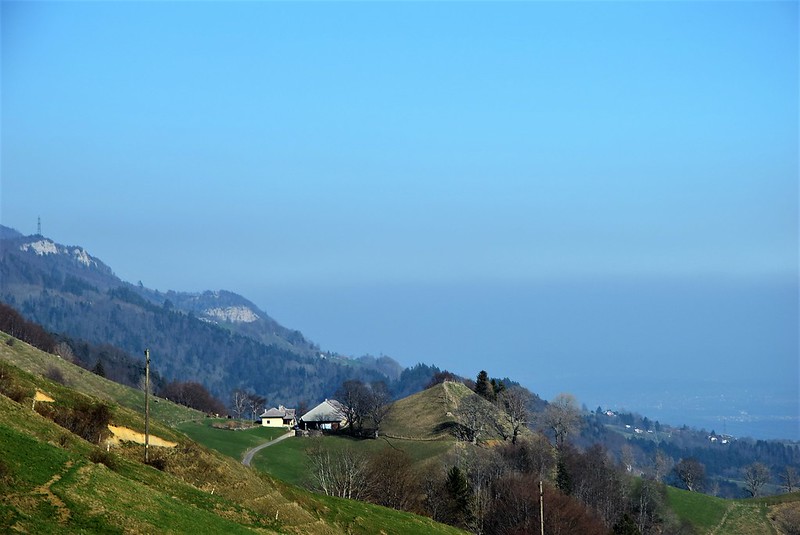