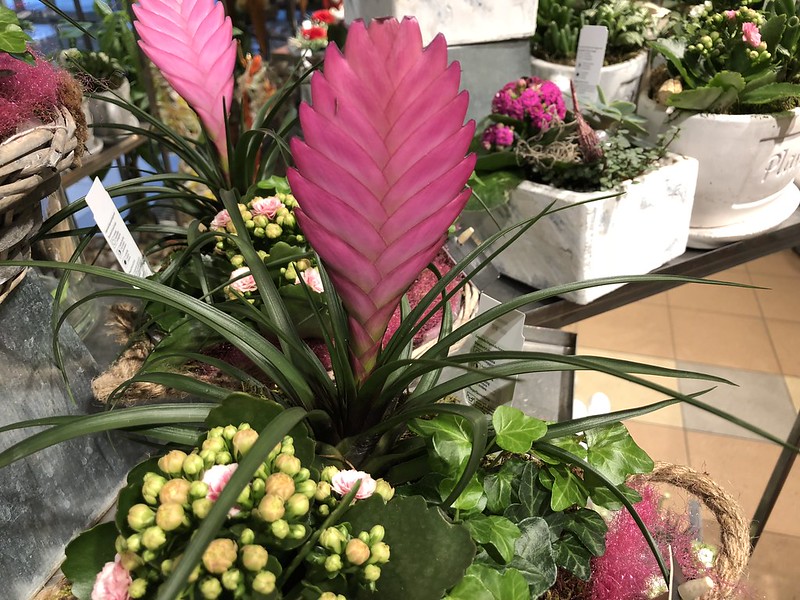 Bromelia come in all shapes and sizes and colours. I once kept a bromelia and it began to make small plants between the leaves but I eventually lost patience with it. 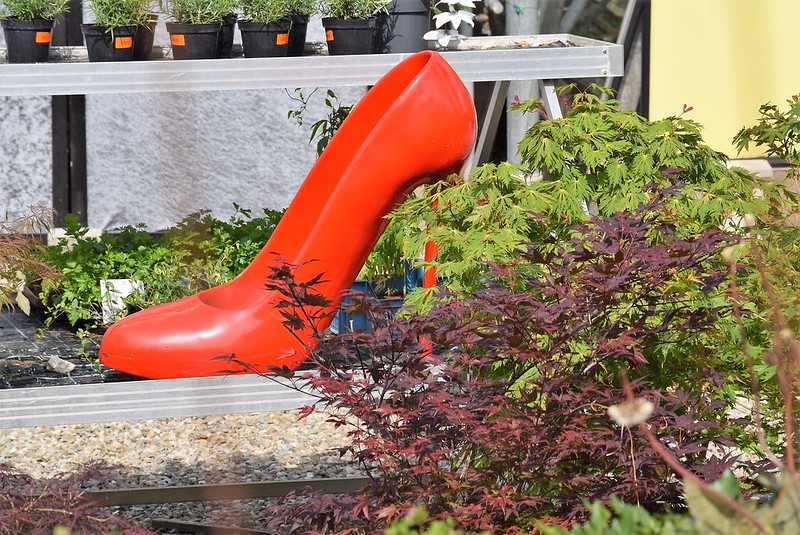 I have a funny feeling that when Prince Charming finds his Cinderella he might have a shock. 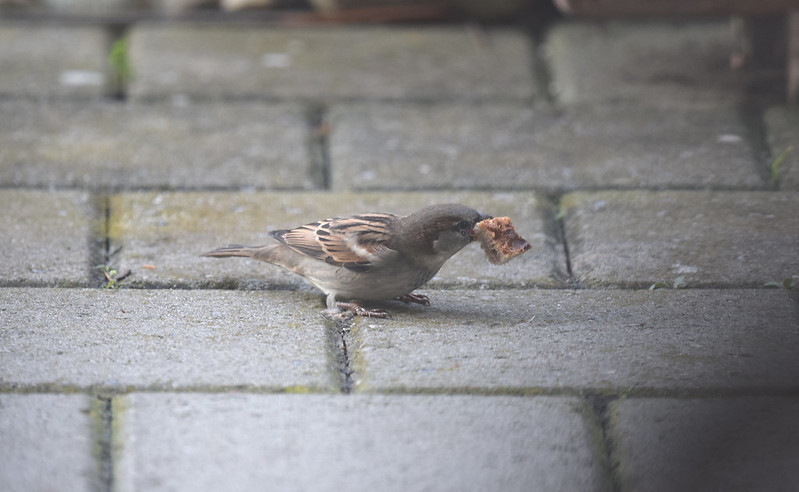 This sparrow seems to have bitten off too much 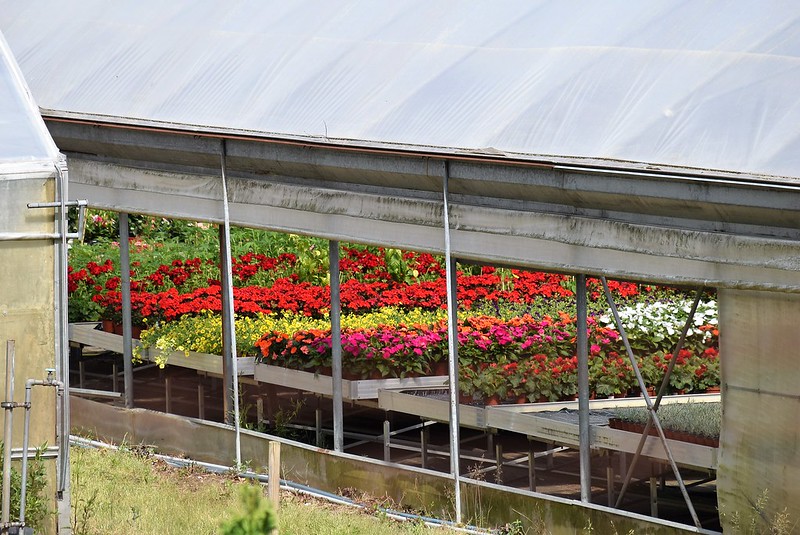 Sometimes there is too much choice 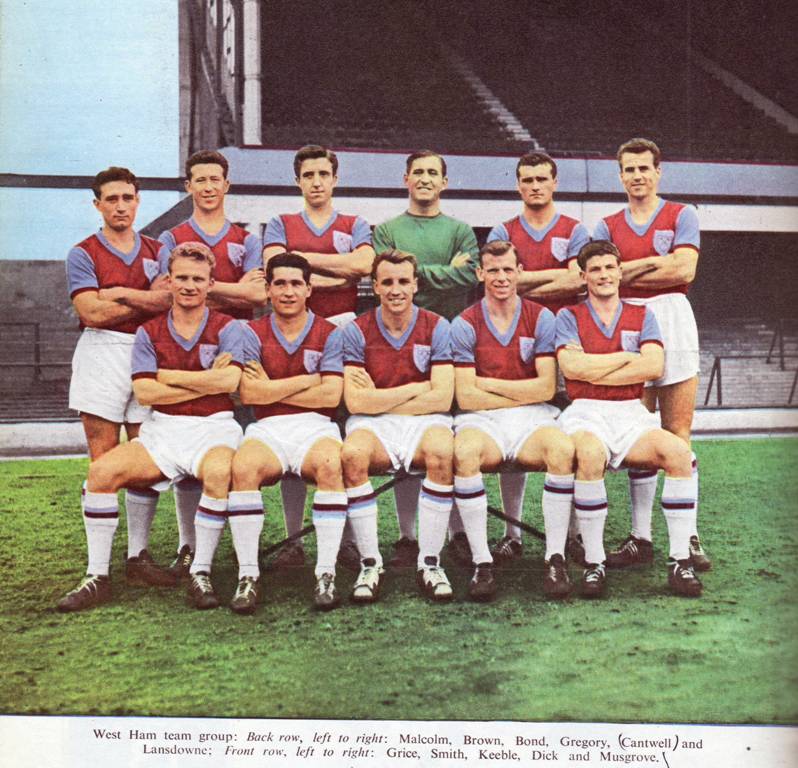 Perhaps not what you expected, but we all had our limerences when we were teenagers I suppose. I had a good friend at grammar school, it was a girls only school, but she was a keen football supporter and like her father was a fan of Leyton Orient football club. My dad was a West Ham United supporter and so that was my team. We discovered a link somewhere and today, about 60 years later, we are still good friends. She is the godmother to my No. 2 son and on my visits to London to my dad, I was always sure of a bed at her house

But I am drifting. We were both football supporters, In my classroom at school I had a photo of West Ham United on our notice board. The teachers did give it a strange blink now and again, but I think they secretly got to like those sexy legs and muscular men.

My friend and I were both East London cockney girls and lived near to each other. What did we do on Saturday afternoons? We visited our football teams for the match. As West Ham and Leyton Orient were both neighbourhood teams they did not coincide with home games. so we would alternate by visiting the match at West Ham on one Saturday and the following Saturday we were to be found at Leyton.

Of course we had our heroes. I had a soft spot for the goalie, Noel Dwyer. Unfortunately he is not on the photo, but Ernie Gregory the reserve goalkeeper. My friend was all for Ken Facey, the half back captain of Leyton Orient. We would collect newspaper cuttings of the matches held and of various articles about the players. We both had quite a collection of scrapbooks from the years that we were ardent supporters – the early sixties I would say. It is so long ago.

Football has a season and is only played in the Winter months, so what do you do when your heroes are not playing. You look forward to the season beginning and go on an excursion to the football ground. At Leyton Orient they would have training sessions of the players during our school holidays and so we travelled by underground to the stadium to see if anything was happening and it was. Our heroes were training at the ground and when they were finished they would leave the ground and my friend and I and a few schoolboy supporters would be waiting outside with our autograph books ready.

The West Ham club owned houses where most of the players lived, in a place called Barkingside, a nicer country part of Essex. I remember we made an excursion there to see if we were lucky, but Barkingside is big and everywhere there are houses, so we had no real success. 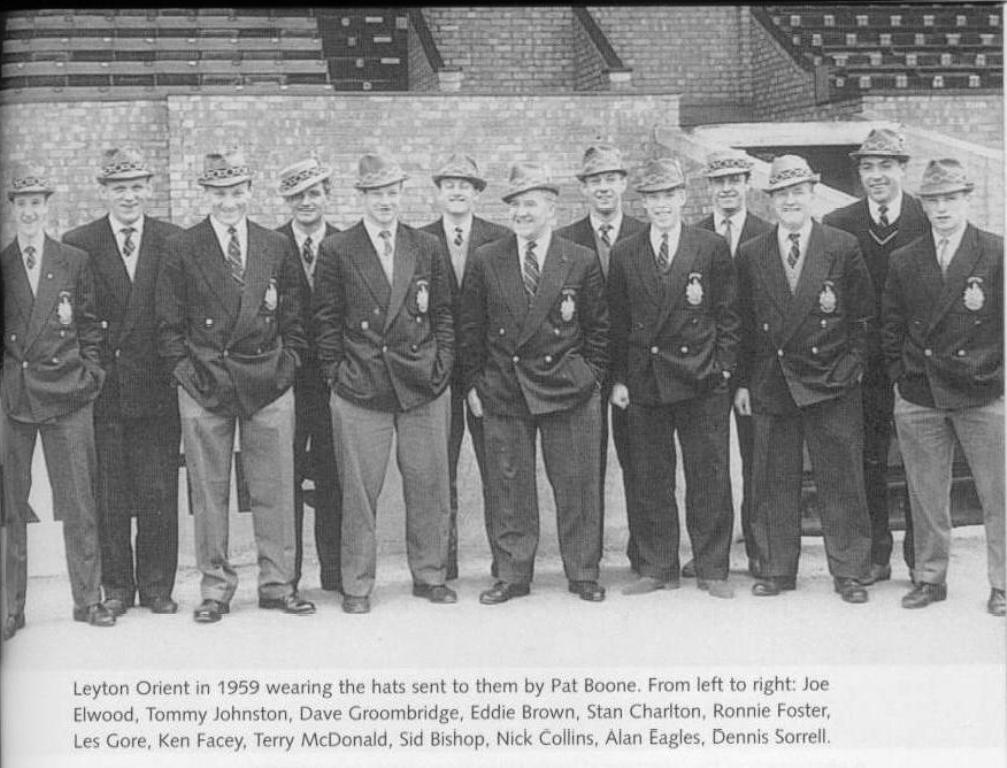 And here is a photo of the Leyton Orient team wearing the hats sent by Pat Boone. My friend and I would always stand in front of the stand where the directors and other team players would sit when watching the game. One of the directors was an impresario and his job was managing various show stars. Often one would be sitting in the stadium behind us. I remember seeing Cliff Richards, he was then a young man, and Pat Boone on a trip to England.

Of course we both had our colourful scarves to wear at the match. Leyton Orient was blue and white and West Ham claret and blue. If only I still had these autograph books and scrap books, but when I left for Switzerland my mum and dad moved from their East London Bethnal Green slum and everything no longer needed was left in the house which  was afterwards demolished.

Of course there was nothing sexual about all of this, we were then about 12-15 years old and had no time, there were exams to study for at school, but a little football in our spare time accompanied by hero worshipping made a pleasant change. 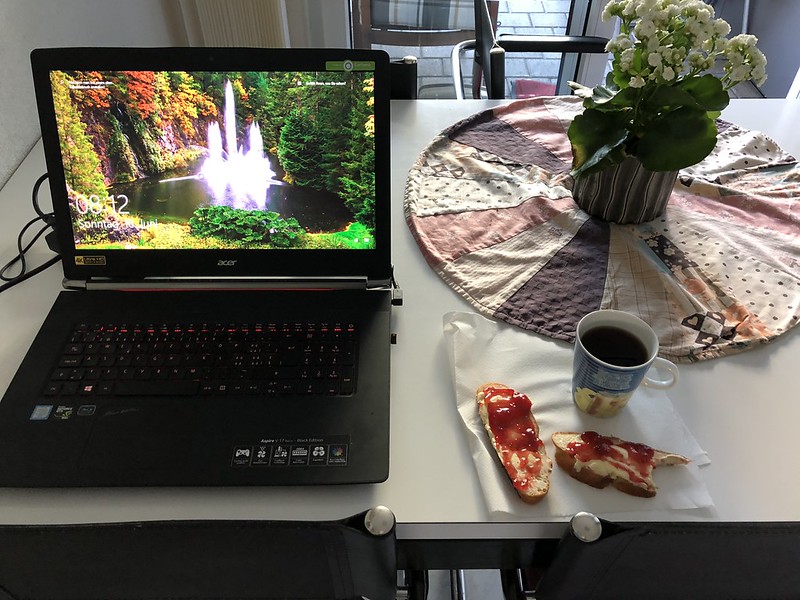 It is a good morning when you can begin the day with something to eat, a cup of tea and of course a computer. Since the last up date on my microsoft computer they rewarded me with various wonderful photos of landmarks around the world before I enter the internet world. Note my plant on the table, a kalenchoe complete with over pot. It was a larger example as the normal and quite reasonable in price. Imagine my amazement when I saw that they had been reduced in price last week. The were still looking good in the store and cost only a quarter of the original price. I decided to take advantage of the special offer and now have two. I put the the new one in the living room together with the others. 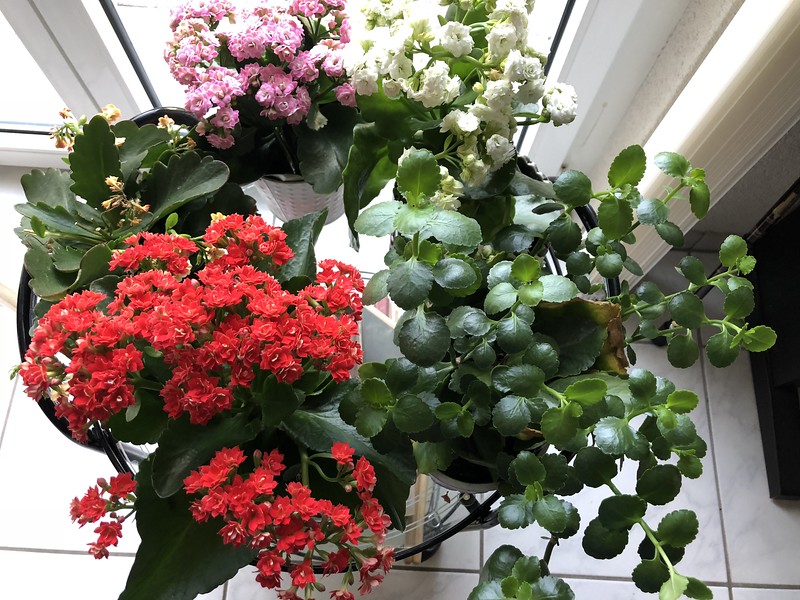 I just love these kalanchoe. They are reasonable in price and flower for a long while. Afterwards you can throw them or keep them as I do. The plant on the right has no flowers, but I have had it for at least a year and it is still growing. Now and again it makes a couple of flowers. Just water them once every 1-2 weeks with a little bit of fertiliser and forget them.

Yesterday I went nowhere and stayed at home. The weather was great, but I just felt too tired. With three different prompt sites now in WordPress, I have enough choice, although I do not manage more than one a day and neither does my cat Tabby, who does her own daily prompt, from a cat’s eye view of course. 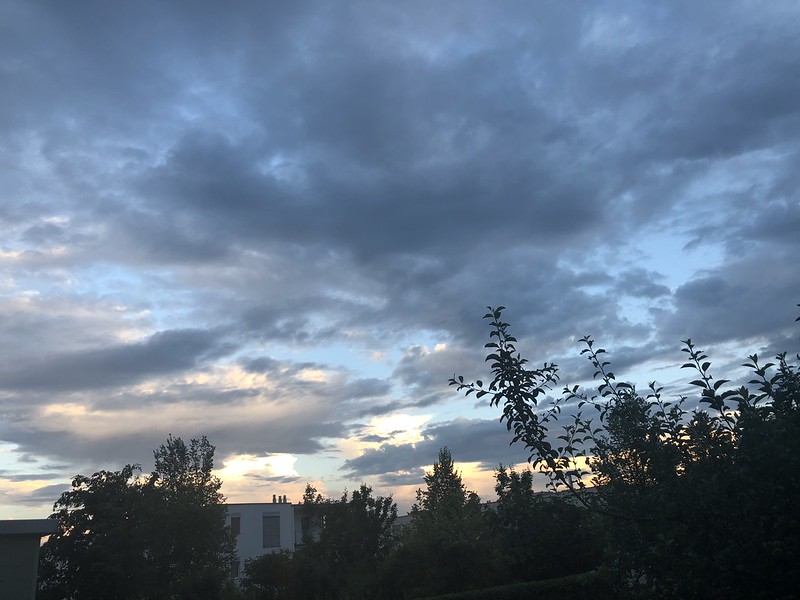 In these summer days we now have the wonderful sunsets in the evening. We thought there might be another storm brewing and there were some dark clouds in between, but the rains stayed away, although it did get quite cool in the evening. I had one of those TV evenings for a change. I was reading but noticed my eyes slowly closing and awoke half an hour later, deciding it was time to retire. I am hoping for more action today.

My next task is to cook a Sunday roast pork. Mr. Swiss mentioned I have not done a roast for some time, and I like to cook it slow in the oven. It is now 9.00 a.m. so it should  be ready for midday lunch, I hope. It is going to be a day of 30° temperatures so summer is here. 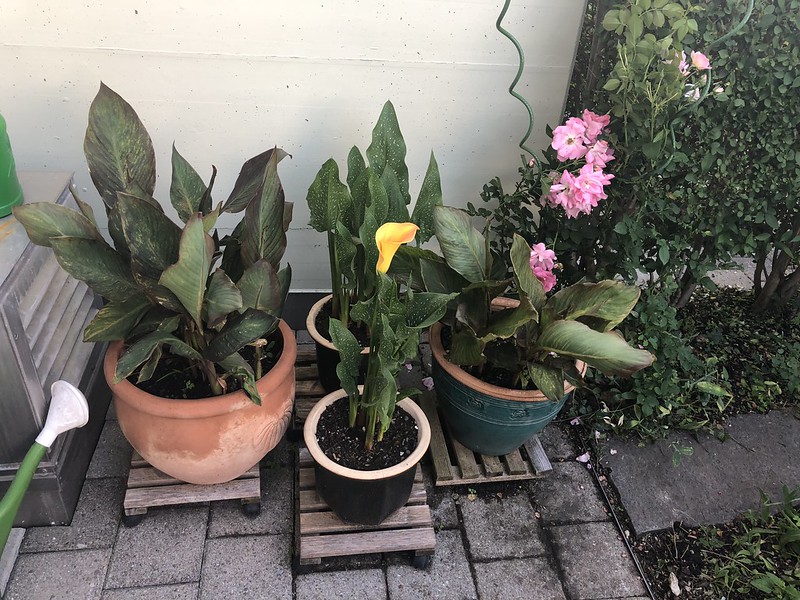 And now my calla is flowering, I have had the plant for at least 10 years and it never disappoints when I return it to the garden after the winter in the cellar. My climbing roses are also back again. I had to do some precarious organising yesterday with a support as they were hanging towards the floor and their blossoms got lost somewhere in the background.

Enjoy your Sunday, take it easy and be kind to your computers, you may need them. 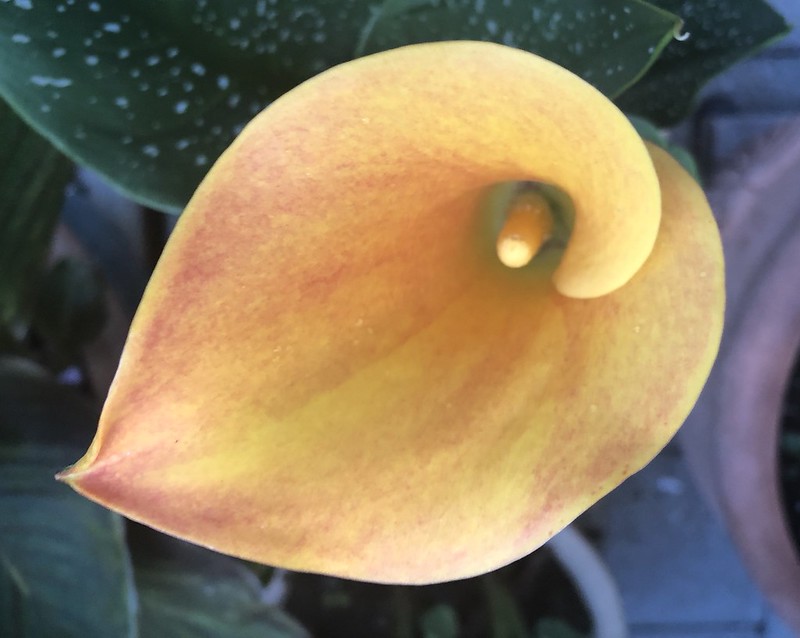