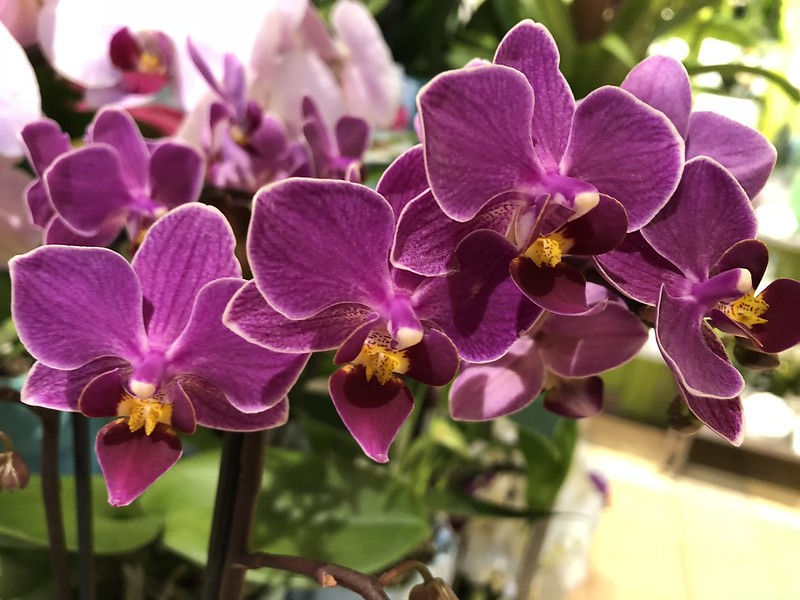 And another different colour. 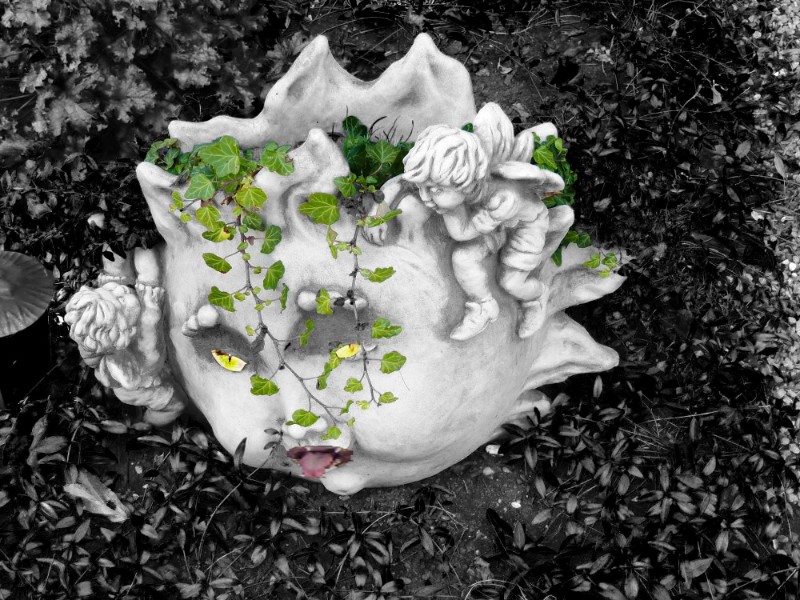 “He does look a bit different to the others”

“But do you think he will fit in?”

“I am not sure, I knew him since he was a kid and he never had any friends. He was always a ragabash.”

“All a matter of putting him in the right place at the right time.”

“So what shall we do with him.”

“Put him in the back row and ignore him. He might melt into the surroundings.”

“I don’t like that tongue. Close the mouth and the eyes”

“I will do not such thing, we had enough trouble getting him here. he always was something completely different.”

“But you cannot put him there with the others.”

“Why not, no-one will care.

“Of course there is, look”

“But you shouldn’t have done that, there will be problems.”

“Yes there will, so let’s go home and leave him to rest. The problems can solve theirselves.”

That night strange things happened. They found another one on the street with those strange marks on the neck, another bloodless corpse. They should have left the stake in the heart, even if the body did not fit in the coffin. 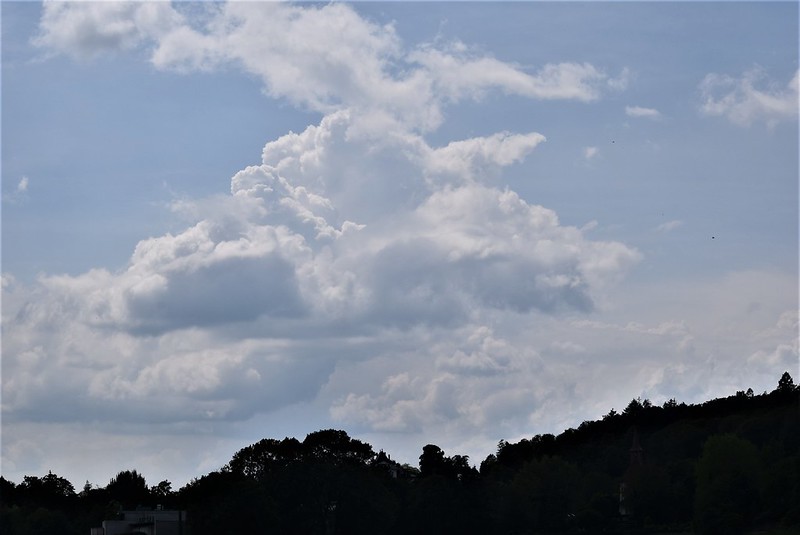 Yesterday afternoon I was determined to go somewhere for a wheelie, come what may. Mr. Swiss had an appointment at the doc in the afternoon but I managed to get myself prepared before he had to go, I can managed to leave the appartment on my own with my wheelchair but it gets a little complicated. If someone helps it is much easier. Not only that but I cannot just say goodbye and go. I have to make sure that I have my mobile phone. I have to prepare my bag with a camera and two extra lens. Do not forget to hang the cane in the holder of the chair. It might be that I have to leave the chair and walk somewhere, you never know and walking free handed no longer works so well.

It was cloudy and a storm was again predicted, but it was the early afternoon and if I could go somewhere for an hour or more I would be satisfied. We now only have one key that fits the main door, but we have ordered 5 new keys that fit our new fireproof lock that has been fitted. I took the key with me as Mr. Swiss was underway with the car and did not need the key for opening the garag door, he has the remote. Our keys still fit the apartment door.

I decided to stay more or less local, via the castle, village and cemetry. This time I took a new route via the senior home. 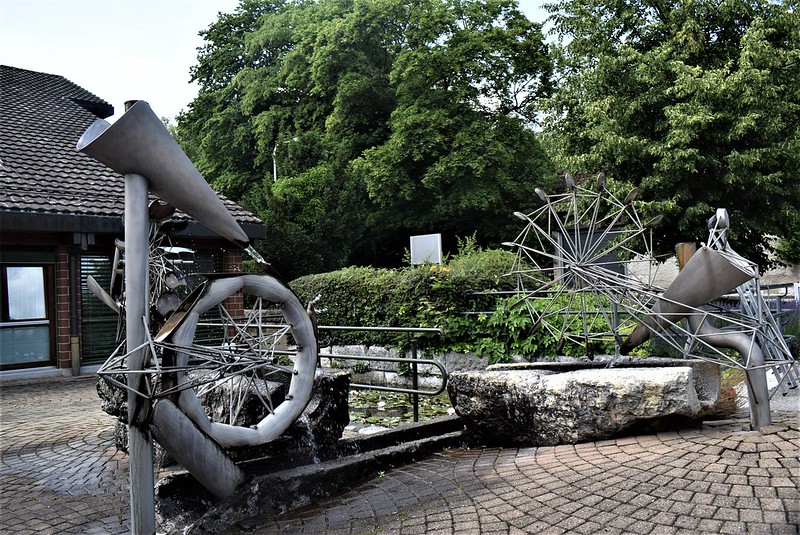 The residence was built about 20 years ago and is quite modern. The inmates have their own rooms. There is a restaurant open to anyone and outside I noticed this very interesting fountain. Who knows one day in 20 years, but at the moment I am quite independent. Mr. Swiss is older than I am, and I find it important for me to keep as active as possible despite my various health problems.  I was quite glad to take this route as I wheeled on further and discovered new possibilities for my camera on the way. It can get boring now and again when you always visit the same places.

I also noticed that the famer was busy mowing his field. The grass is afterwards left to dry in the sun on the surface and the cows can munch on the hay during the Winter. 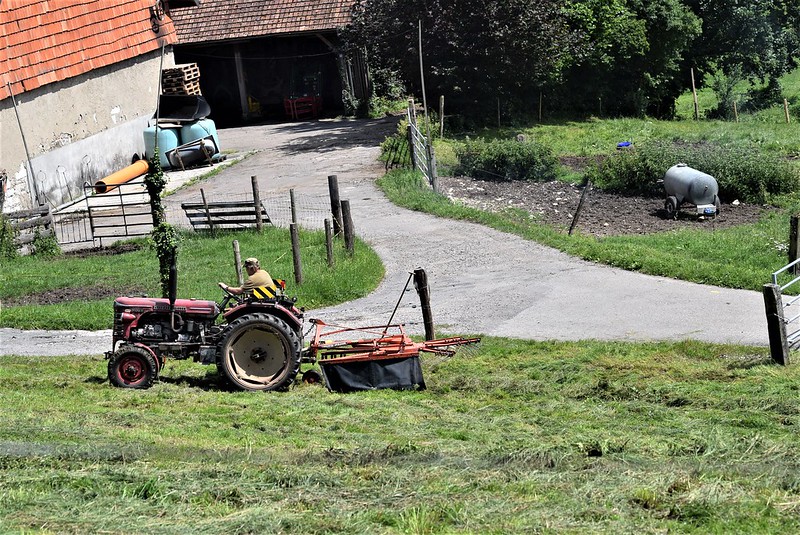 I decided to call in at the animals in the stables, but even they were taking it easy in the afternoon sun. Have you ever seen a chicken relaxing? 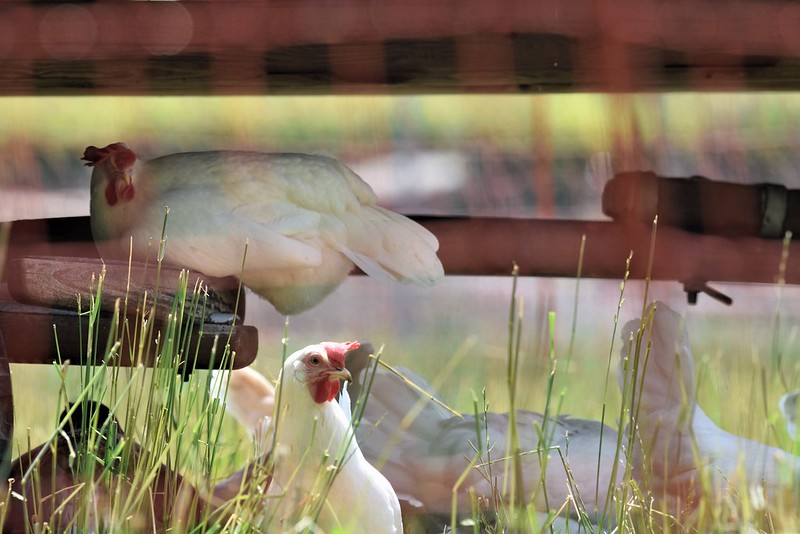 It was new for me, but they like to get comfortble in all sorts of strange places. This particular chicken was resting on the lower part of an agricultural machine in the shade. The other chickens were ground level below the carriage. 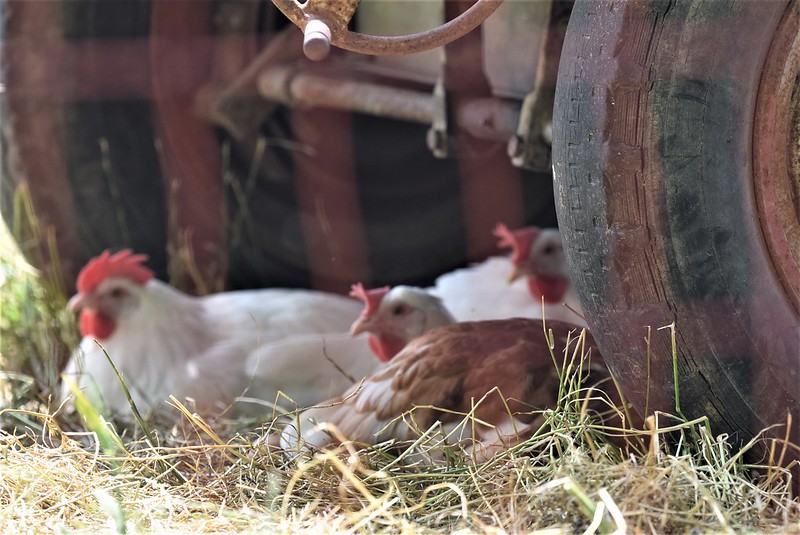 Otherwise there was not much action. All the animals, the geese and the ducks as well as the horses, seem to still be having their siesta in the shade.

I wheeled on through the cemetery where there was not very much action. The inmates were all having their eternal sleep. As I wheeled on towards home my telephone began to vibrate somewhere. Mr. Swiss was ringing to say he was back home again and where I was. There were the distant sounds of thunder and he had heard an ambulance somewhere near. I reassured him that I was wheeling home and would soon arrive. I arrived safely and worked on my computer outside on the porch and then it began to rain. It was almost a deluge so I shifted into the kitchen. After half an hour it was over, although left us with some very dark skies, threatening to return.

It is a good summer this year. We have the nice sunny days and afterwards it cools down with plenty of rain, so no big operations to water the garden.

Today I am planning on a quite morning at home and perhaps a wheelie in the afternoon. I am getting quite adventurous with my excursions. One of the gardens I wheeled past had a European Smoke Tree in the front garden. I also have one but mine never flowers as good as this species. It is for this reason we know them in German as “wig bush”. 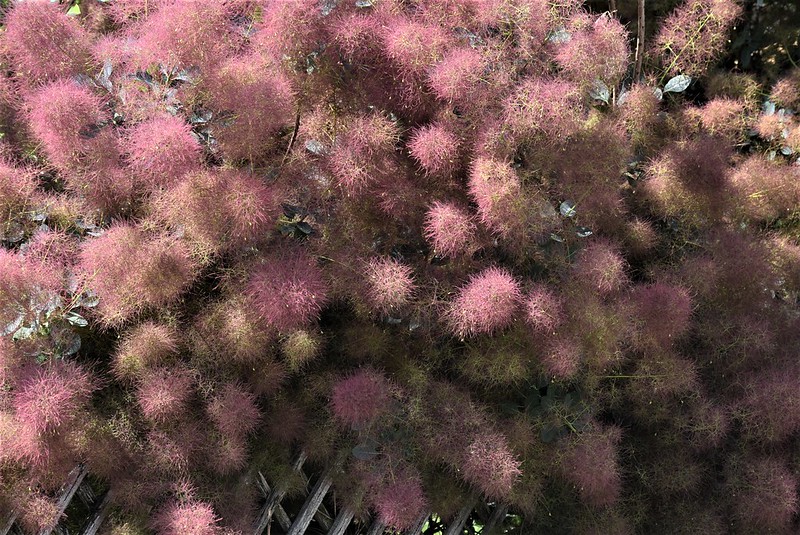 I will now leave you to do my daily chores and enjoy golden oldie life. Take it easy, do not rush, and see you around.