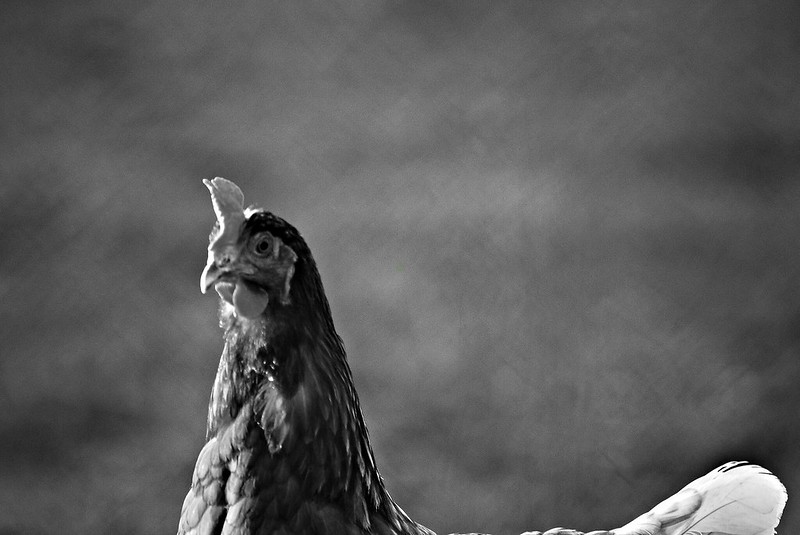 Portrait of a chicken 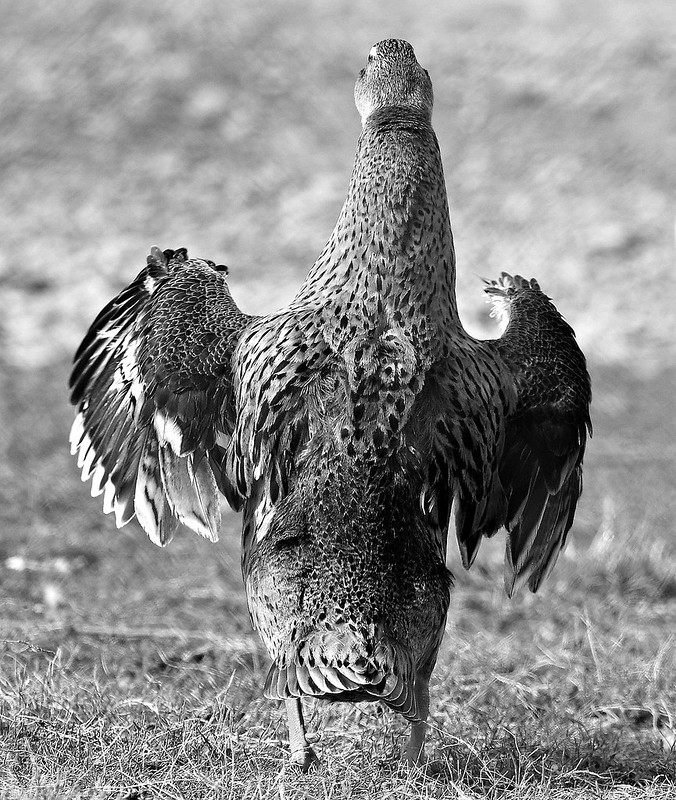 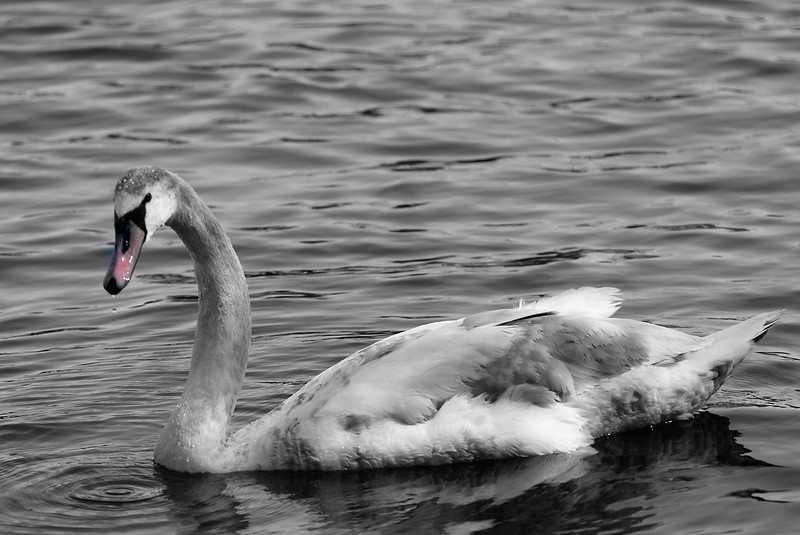 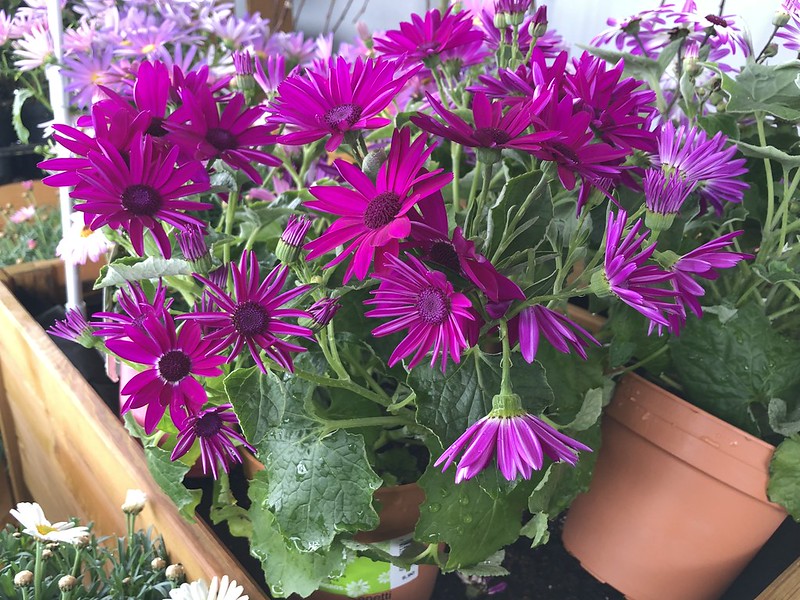 If you do not know the name and it has a middle with petals surrounding it, it must be some sort of daisy, although I am sure this one has a special name. 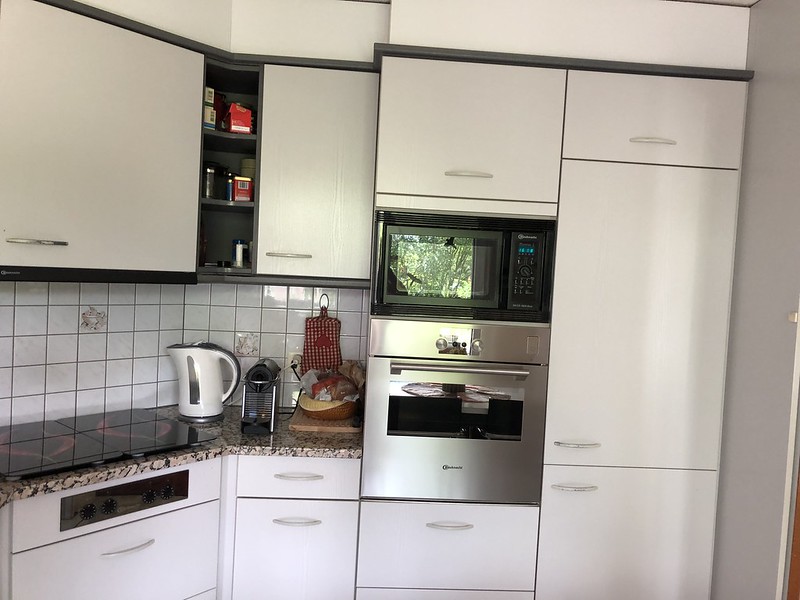 My kitchen is probably the biggest power eater in my apartment: the fridge, freezer, microwave, oven, cooking range – they are all on stand bye.

Life has become one big battle of reductions. We all do it the wrong way. My ancestors lit a candle or later used gas. No-one really asked where the gas came from. Everyone had a so-called meter and you fed it with change when the gas was no more. You would be cooking a cake in the oven, perhaps  the meat and vegetable were on the flame and suddently the flame got smaller and weaker and it was no more. It was time to put money in the metal box, the meter, to get your supply of gas again. The funny thing in those days was no-one cried  to save the gas. People were not rich, but paying as you go seemed to be more manageable than having a monthly bill through the letter box.

Perhaps it was growing up in these surroundings that gave me a basis for not living as if there was a second world around the corner. If we left a room in our little house in London we switched the light off. It was a normal state of affairs, you save electricity. My mum remembers her mum as being one of the first in our back street in the East End of London to sign for the street to be opened up to lay the electric cables. We continued to cook by gas because the gas pipes were already there, but now we had an electric light and no longer needed to light the gas holder for light. This electricity was new, and my grandparents, as well as my parents, learned to care for it.

Growing up under these circumstances, it was in your system. I have now been married 50 years (next year) and I am still switching off the bathroom light when the bathroom is empty. The kitchen is the place where this electricity is mostly used, but our dishwasher is only in use from 9.00 p.m. in the evening, as we have half price electricity from 9 in the evening until 6 in the morning. This is the same for our washing machine in our linen room in the cellar and that is only switched on for a wash at 9.00 in the evening. The biggest wash, the white wash, is just 1 hour 20 minutes so I can easily hang it in the evening and it dries by the morning.  Perhaps you might think this complicated, but our electricity bill remains normal.

I even recharge the battery in my wheelchair from 9 in the evening. Our electric life mainly exists in the night hours.

I am not an environment freak that wants to save the world, but just like to save my own money. I remember once seeing an elderly lady in the supermarket with her granddaughter. She was buying eggs and the granddaughter intervened. “No granny, not those eggs, they are not environment friendly. take those from the hens living in natural circumstances”. They were 50% more expensive, but granddaughter was being kind to the hens If granddaughter had known what she was talking about, she would have realised that battery chickens are forbidden in Switzerland and they all have room to take a walk on their farms. I am also sure that grandmother did not have so much money to buy the more expensive eggs.

However it goes without saying that I am careful of what I use in my daily life and avoid using plastic where I can, or at least give it back to the recycling depot. Even our newspapers are collected once a month for recycling. Of course we have computers and a television, you just have to keep everything in its place. I switch my computer off and disconnect it when it is not being used: it is just common sense. I do not live a life of reduction, if I had wanted to, I could have become a nun I suppose. 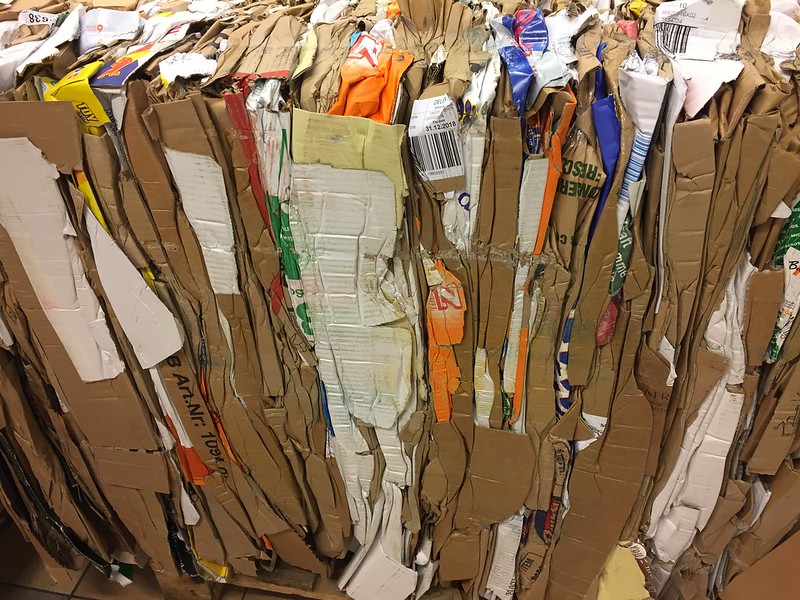 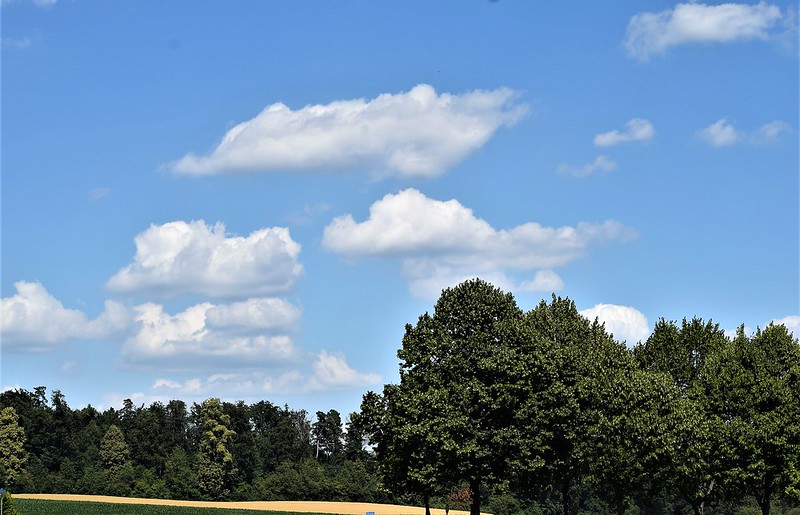 Floating clouds seen on a wheelie I took yesterday afternoon in my chair. I just love those clouds that seem to hang in the sky, really one of nature’s paintings.

My start to the day was one of those that I am not so keen on. It is again time to change the bed linen which becomes quite a strenuous task as you get older and less mobile. We split the work, but for both of us it is not so easy. I do the duvet covers and cushions and Mr. Swiss struggles with the fitted sheets and dusting the bed frames and hoovering beneath. No matter how much you split it up, is it still strenuous. The washing of it all is the least work as the machine does it, just the ironing of the duvet covers,  which is my task, although sometimes No. 1 son might help or Mr. Swiss. 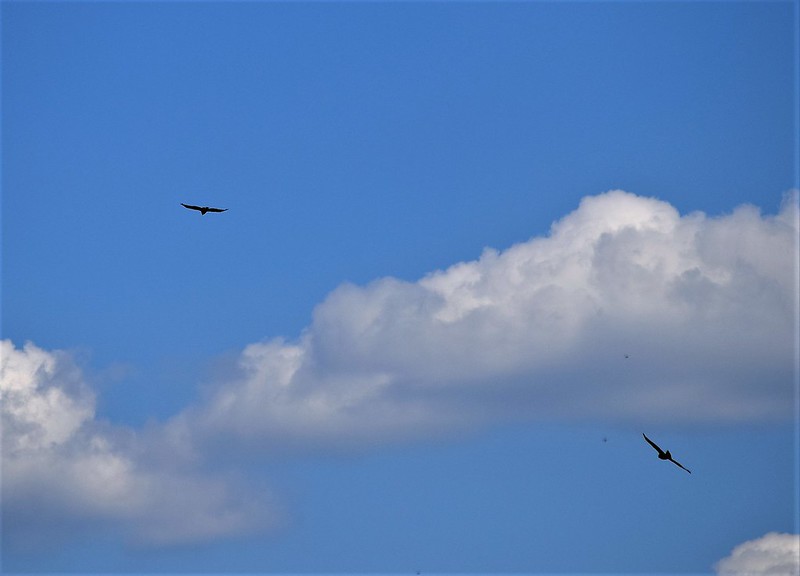 I saw two big birds in the sky yesterday, but it was not superman.  I had my zoom lens with me but always have difficult focusing with it, getting a blur most of the time and not finding the objects I want to photograph in the vast expanse of sky. I did this one with the smaller lens, but I found them. I met a colleague on my wheelie and she said that the chickens at the stables saw the birds, which are red kites, and they all scattered to the shelter of their home. They probably thought they were being attacked from invaders from outer space. 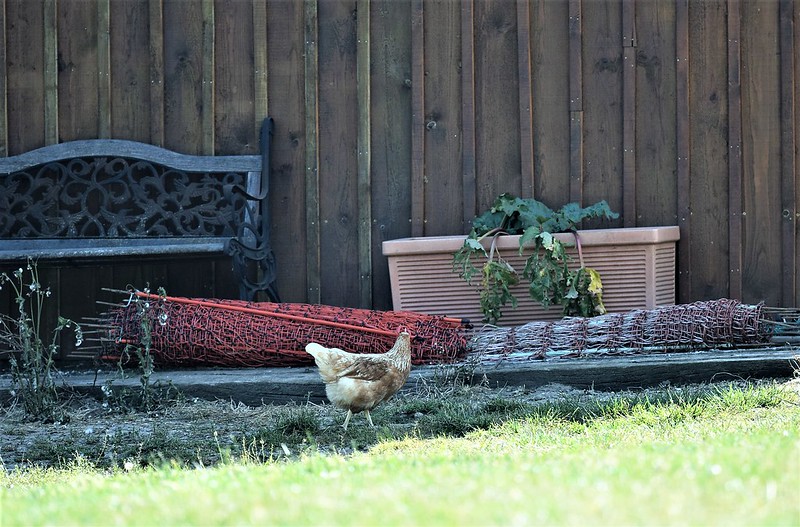 This one was still looking for somewhere to hide. My friend said that all the animals seem to be disappearing. The horses have left the stables, and even the ducks are less. I was actually on the search for some cows yesterday, but the meadows are empty, although their empty hay troughs are still there, hopefully waiting for some new cows. 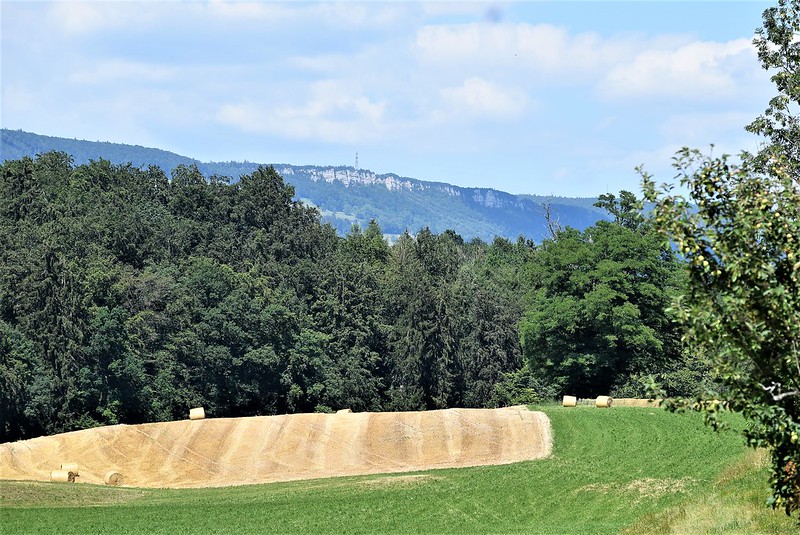 At the moment the farmers are busy with the first harvesting and the fields have had their first hair cut, removing the wheat. 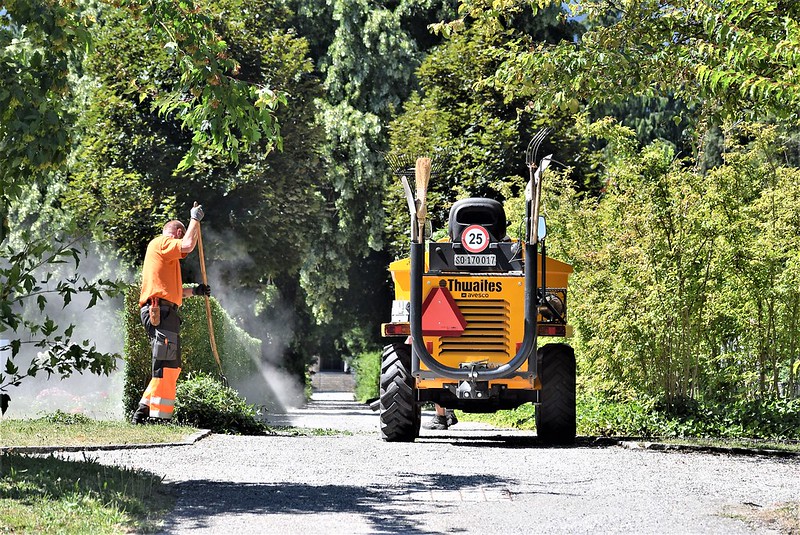 The gardeners were even busy in the cemetery mowing down the fields of grass and pruning bushes. This was the result. 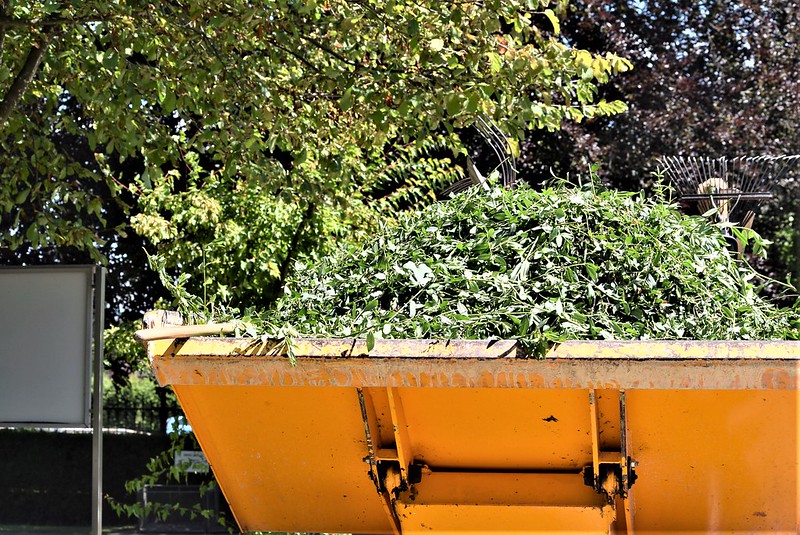 I noticed on my many wheel-throughs at the cemetery, that there are more empty spaces than occupied ones. I do not think there are less people leaving this world, but being buried no longer seems to be so popular. The little cremated stones are increasing which need less space. I think big funerals are becoming too expensive for many, which I can understand. It is nice to have a memorial celebrated with a stone and all the carvings, but it has become a pricey thing. Graves are a limited choice in Switzerland, unless you have the money to actually buy the ground for a family residence. I think the limit is 30-40 years before you are disposed of forever, but am not sure.

Otherwise it was another sunny day and after my wheelie and the evening meal I spent the evening outside on the porch uploading photos and with my Kindle and watering the garden. My hibiscus bushes are now full of buds which are the last to flower in summer.  I think most gardens have a hibiscus somewhere in our area. I bought one once, but now have four, the others grown from the seeds from the original hibiscus.

Today is a day at home. No. 2 son will not be home for lunch as he is invited, so it is just me and Mr. Swiss taking it easy at home. I will be doing my daily cleaning chores for an hour and might fit in a door cleaning session: as they are clean, it is just a refresher.  One of the problems living in Switzerland is that you automatically become a Swiss housewife and actually feel good when you clean something. After breaking my leg I could not do so much, but now the indestructible Angloswiss is back in full power.

Only another two days to the week-end so make the most of the working week left. I leave you with some flowers I saw on my walk yesterday,  but have no idea what they are. Every day I see something new. 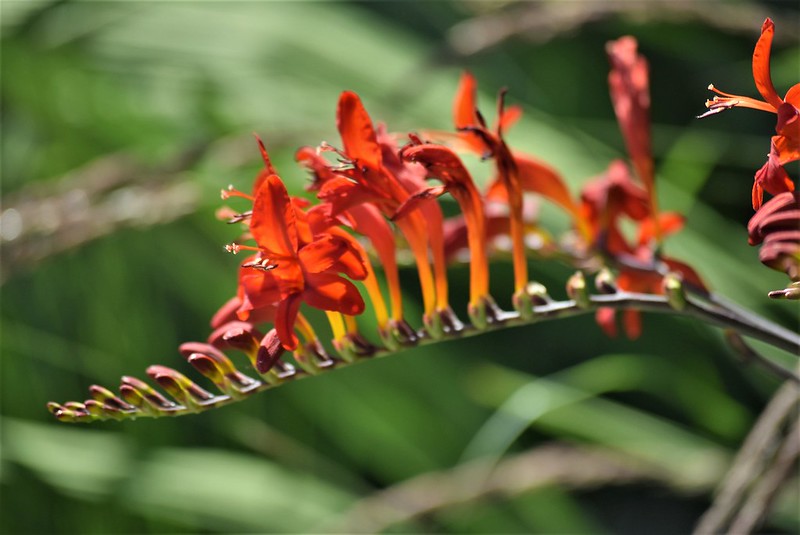