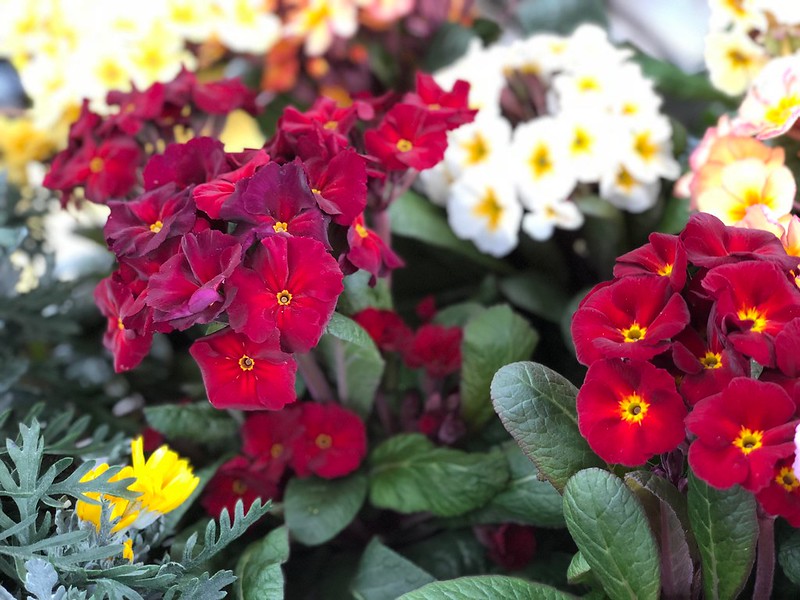 Another one of those special flowers where I have no idea what they are. 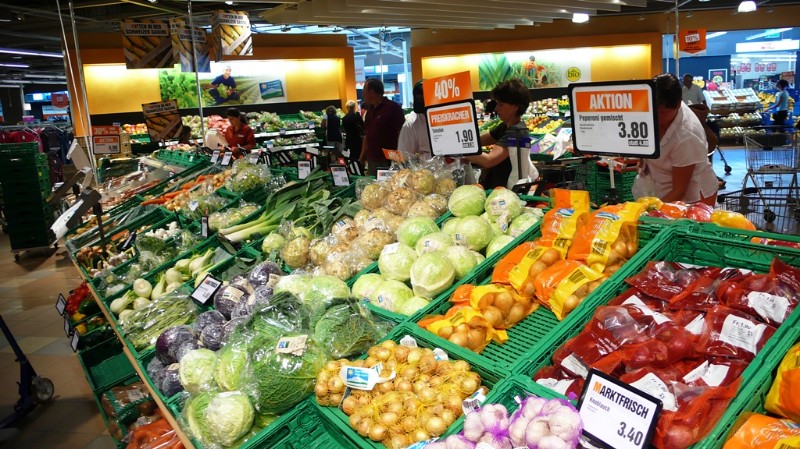 The general idea is that mum is the best cook. Then the kids get married, or move away and they discover there are other ways of cooking and preparing meals, so mums, forget it. There is always someone that does it better. It is one of the reasons that I like to try something different sometimes, although often the ideas fail me and so I go back to the same old thing: everyone likes it, everyone eats it, and there is nothing worse than having a plate full of leftovers after a meal.

My mum had the best method. Mum could not cook, but she cooked the same as her mum did and her mum grew up at the end of the 19th century beginning 20th century. There was no such thing then as organic food in those days, although no that is not true. Everything was organic because the idea of leaving nature to itself was then the only idea, so perhaps grandmother had more natural qualities in her vegetable. However mum’s first ideas of cooking were when tinned food was invented. Stew was always no. 1 on the list, with dumplings of course: the pastry clumps you cooked with the meat and vegetable. If mum put carrots in the stew they usually came from a tin, but she cooked them together with the meat for at least a couple of hours to make sure they were cooked.

Dad loved everything that mum cooked, but his mother also grew up at the end of the 19th century. In those days the longer you cooked it, the better it was, especially if it was meat. Mum never realised that liver only needed a few minutes to cook, and you usually had to chew her liver because she cooked it for half an hour at least.

Dad was really convinced that this was the best way. Later when mum passed away, he was left to his own devices. Pork chop was cooked in the oven because mum always did it like that, everything was cooked in the oven.  He usually cooked it for at least 1-2 hours to make sure it was tender. I remember his words when he visited us in Switzerland with his girlfriend. They were both golden oldies. He was making excuses all the time when I cooked a meal saying “they like it that way”. I did not ask him what way or who “they” were, as it was safer.

The general opinion at home was that I could not cook and my old man (meaning future husband) should be pitied as he would be living on fish fingers and chips for all his life.  I do make them now and again, but rarely. Mum cooked vegetable until it fell apart, I prefer mine to have a little bite to it.

Is it a wonder that I dislike precedents? It makes life boring. I like a bit of oomph in my life, trying perhaps a different spice, mum only knew salt and pepper. Mum never made spaghetti, but she was sure it grew on trees. 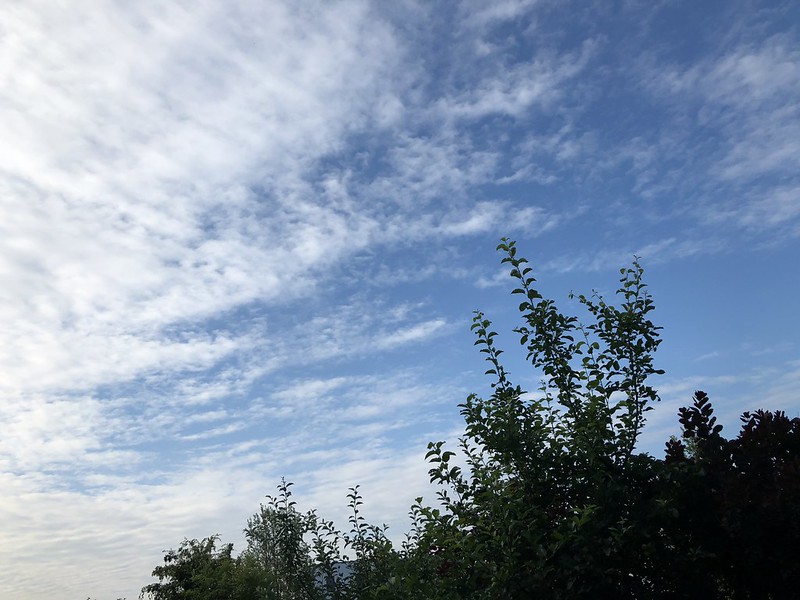 And another summer’s day arrives somewhere in Switzerland, in my back yard. Mr. Swiss did ask me what sort of clouds they are, but my cloud knowledge is not good enough so I told him some sort of stripy cumulus, although I do not think that officially exists.

Today is Monday again, so back to the usual weekly routine. I usually awake around 5 in the morning for a visit to that place most of us go first thing and then I hang my mobile phone on the electricity. It only needs just over an hour to give it full power, but this morning I forgot. I though I had done it but did not. OK, no big deal as it still had 70% power, but these are the little things that can annoy when you forget. I only need my phone for a couple of photos early morning as taking sunrises with the camera takes to long to upload and my Flickr photo programme uploaded automatically. 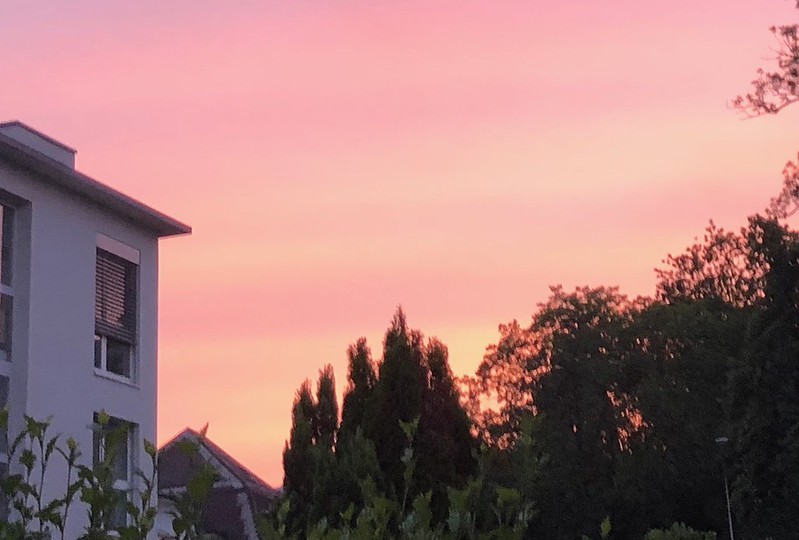 I usually sit outside reading on my Kindle until about 9,30 in the evening. The daylight is slowly fading, but you can get some colourful effects from the sunset in summer. This view was looking north. As it got darker a plane flew over, quite low, and you could see all the lights. This was not one of the international planes to and from Zürich or Geneva, as we lay in the middle. It seemed to be heading for our local airport in Grenchen and was probably a Lear jet hired by one of the business people.

I had a day at home yesterday. Actually I spent more time hugging the bed at lunch time and afterwards it was too late for me to do a wheelie. 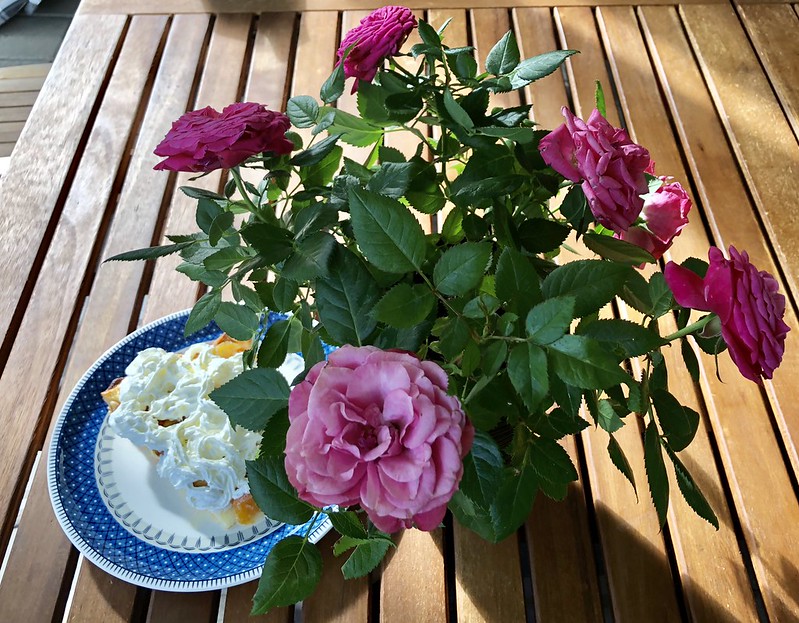 I heard Mr. Swiss being busy in the kitchen and when I eventually returned to the normal world after my midday sleep there was the aroma of a baked tart in the kitchen. He had been busy with an apricot tart. Something like this is ideal for a Sunday tea, as it has eggs and cream in the topping and I usually cover it with whipped cream just to make it all worth while. It is now the apricot season in Switzerland, mostly coming from the Valais area. We have a farmer up on one of the local mountains that also has a couple of apricot trees, but it is not normal where we live.

The roses in the pot on my table outside are still flowering. They are special potted roses they sell in the store every year in summer. They last quite long, always produce new flowers and when they are finished I plant them in the garden. Sometimes they grow again the following year and begin to develop. They are reasonable to buy and a lot cheaper than a king sized rose bush.

And now to make my way to the housewife talent show although everything is under control. In the meanwhile Mr. Swiss has completed the overture in the living room with the vacuum cleaer and I will perform the main acts until I reach the finale before going shopping, fitting a shower in for a interval.

It is only five days before the next week-end so make the most of them with dilligent work and enjoyment. Life goes fast enough. 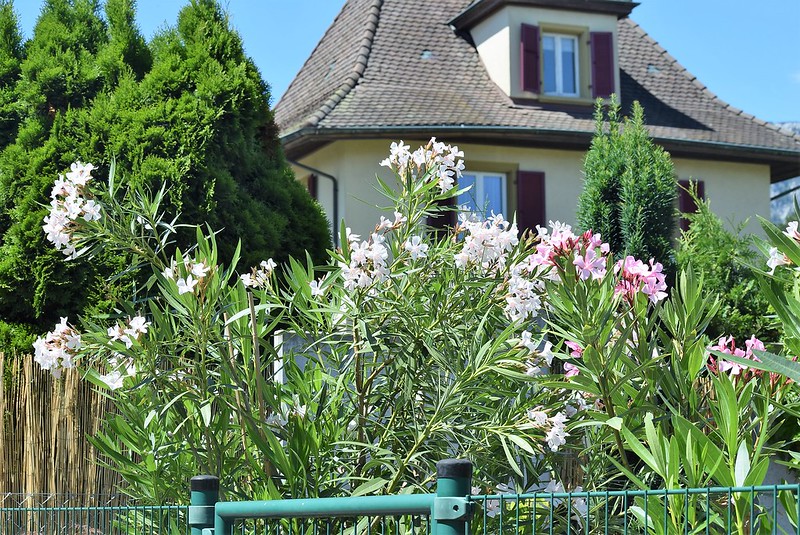