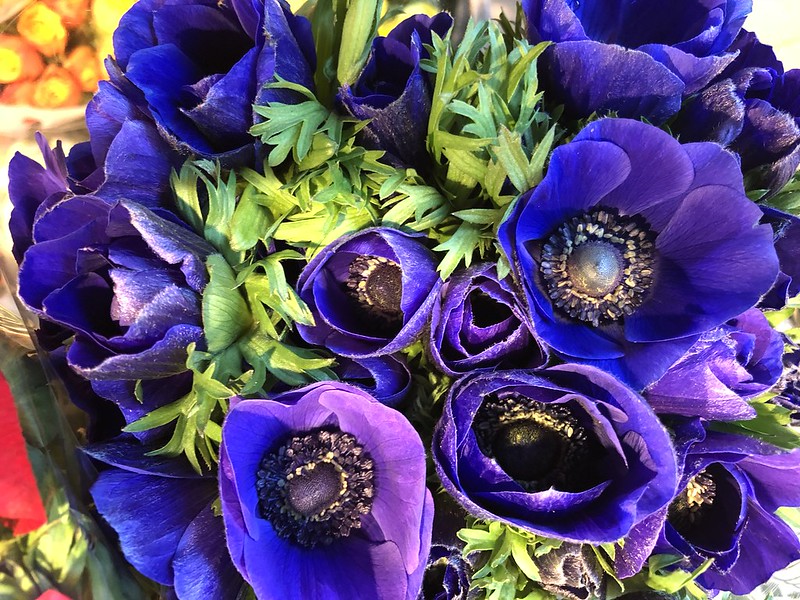 I love anemones, it was one of my mother’s favourites. I have often planted them in the garden but they never seem to survive for more than 1-2 years. 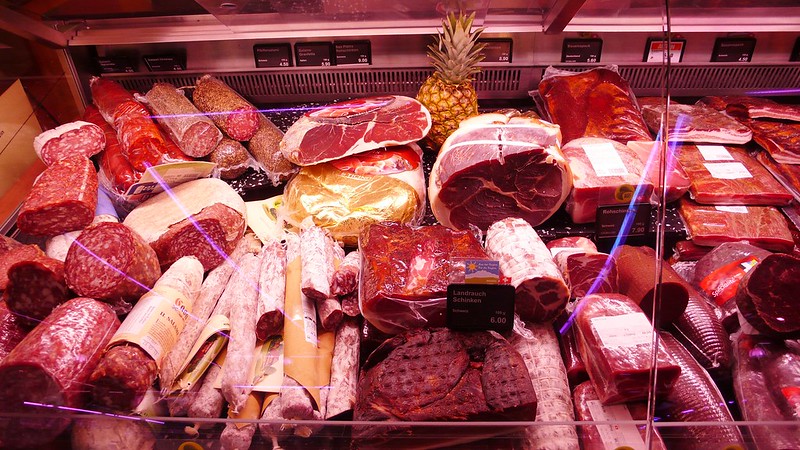 Every evening, no, most evenings we eat cold cuts and cheese with bread and some salad veg like tomato and cucumber, and sometimes even garnished with radishes. Three times a week we shop for our evening food and I usually buy at the counter. Prepacked is OK, but I like to have fun when shopping.

This is the selection we have on average in our supermarket and we really do have an agony of choice: about 6 sorts of salami and three types of ham, as well as the Swiss specialities of dried alpine meat (although I would say an acquired taste).

Somthing is wrong somewhere. How comes Mrs. Swiss and Mrs. Germany, Mrs. England, Mrs. Italy and the rest of us Europeans can choose from so many different kinds of meat. When the day is done there are remainders which are put in the fridge for the next day. And when the week is done and there are still remainders. There must be a end solution somewhere is a great dumping ground for the food not eaten.

Your smorgasboards are brimming over with a 100 varieties of some sort of sandwich. When I was a kid mum would make a sandwich but no fancy trimmings and sauces. You had cheese and tomato, perhaps a ham sandwich, and of course the good old spam sandwich which was some sort of meat, basically pork mixed with other undefinable ingredients. It usually came in tins and was a question of survival food in the last world war.

We all know about hunger in the world and I am not going to make big statements about it all because nothing really happens. I am sure my supermarket will still have more varieties of meat that I can count on one hand for the next many years, until perhaps one day even our food system will no longer function, but that always happens to the others doesn’t it. 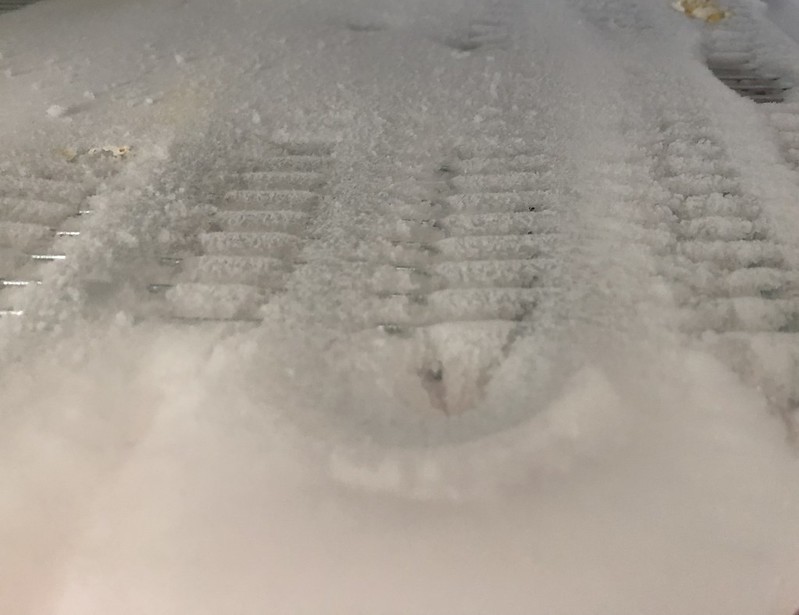 When the inside of your freezer looks like this, then you know it is freezing as it should. There are a few centimeters of pack ice on the shelves and when you close the door you have to give it a kick, a shove, to close it properly.

Yes, it is time to defrost. The contents are removed, and all sorts of frozen objects suddenly appear. Some are indefinable as they have collected so much ice and snow their shape has been deformed. And the boxes with remainders of strange frozen objects that you will never eat after being frozen for at least a year. This is not to mention the frozen peas which now resemble an iceberg with green spots in the bag. When did I buy them? Cannot remember.

And so two bowls of hot water are placed on the shelves and lets forget it for a while, but no too long. You might suddenly have a river on the kitchen floor. However, no big problem. Now and again thumps and crashes can be heard as the ice dislocates itself from the bars and falls to the shelf below. Eventually all is well, you now have a fully functioning freezer with space for a new collection and the garbage can is probably full of those surprise discoveries you made on the way. You will even be saving money because the electric freezing mechanism no longer has to work so hard fighting the pack ice.

Remember the last time you did it and swore on oath that you would never again wait so long. Oh well, why bother. You notice when it is time to do it again, when you can no longer close the door because the ice is coming towards you. 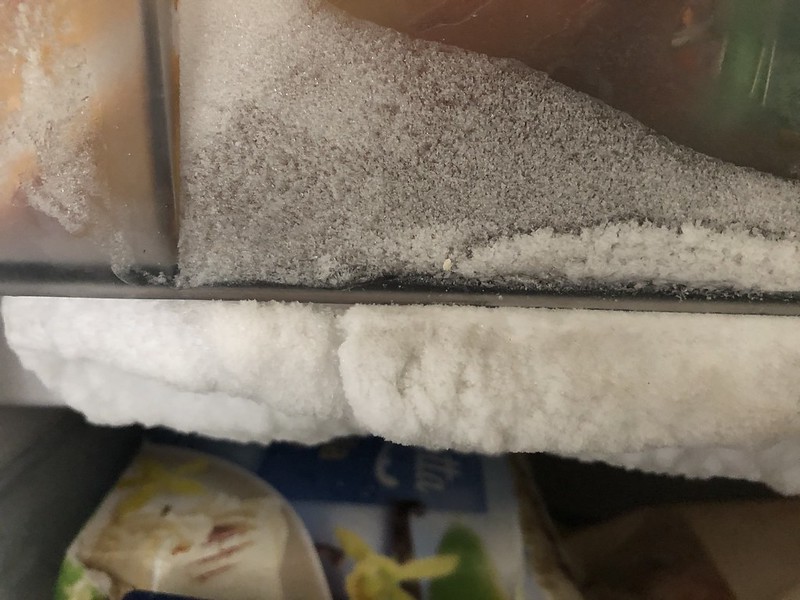 Weekly Weather: Cold (in the Freezer) 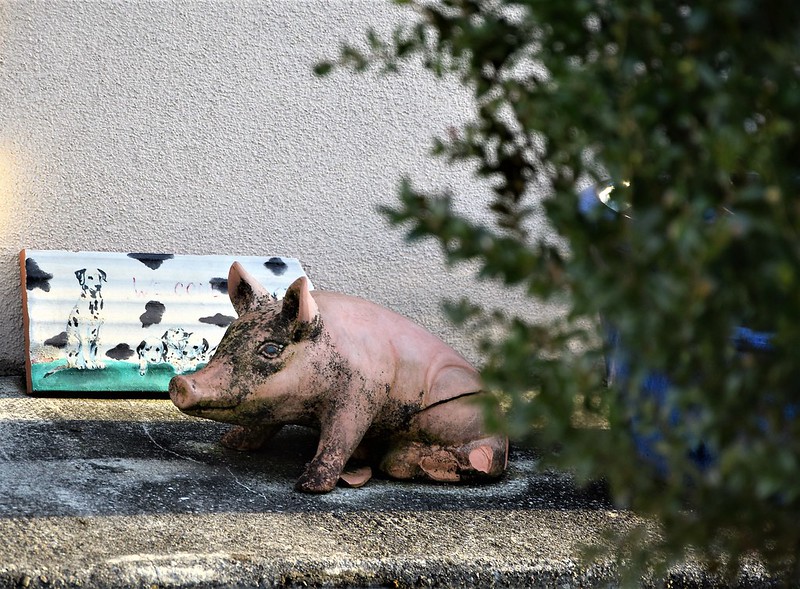 This is the real pig as we imagine it. Nice and dirty, fat and getting on with life, because it will probably be a short one. This little piggy used to be in our village in a garden, but even this one had to go. 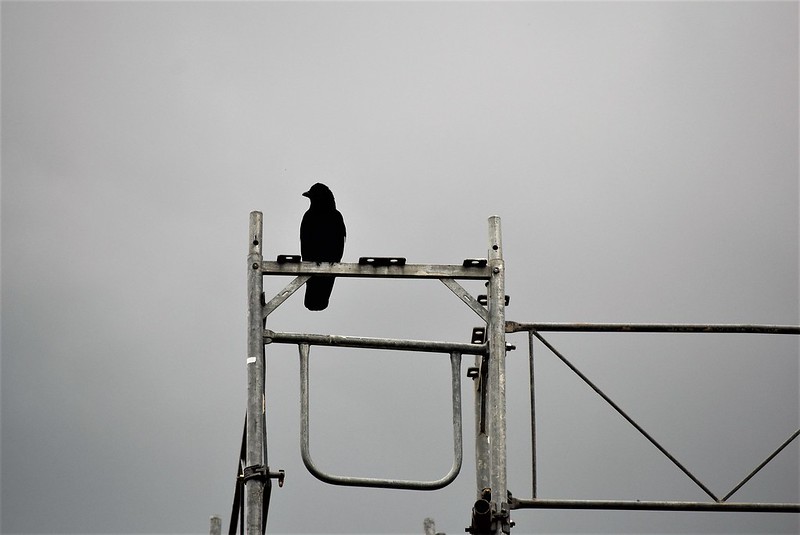 This lonely crow sitting on the scaffolding on the block opposite ours says it all for today. We have a solid grey sky and it rained almost all night, not just rain, but a downpour, a monsoon. We have had so much rain lately that even a news report said that it is a record for Switzerland. The days are following the same pattern. In the morning dull and miserable with perhaps some rain and then brightening up in the afternoon with some sun through to the evening. As soon as you head hits the pillow you hear the drips outside. I was uploading my photos outside on the porch and this crow suddenly appeared. I put my photo chip back in the camera and managed to grab a few photos on top of the 60 I was already uploading.  That was really a last minute photo.

Yesterday afternoon I really wanted to get out to make the most of the break in the weather. The cleaning lady was due for her two weekly clean of the kitchen but Mr. Swiss was at home so he found I should go when the weather is stable. I decided to stay near on our side of the village nearer to home in case it began to rain again: no castles or river, although you see the river from a distance, but they have some interesting gardens and there are cows. 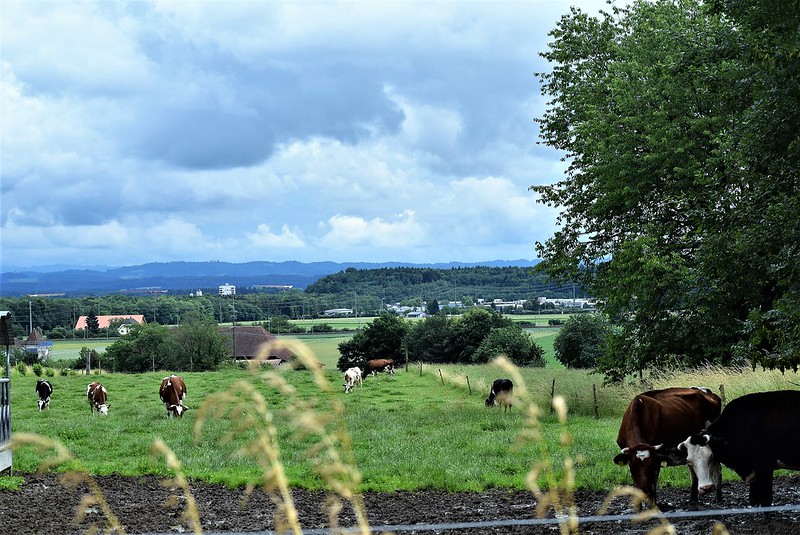 I set off in my wheelchair and it is a comfortable ride, all on paved surfaces and no stones or rubble for the wheels to bounce around. At the end of the village, before the forests and agricultural plantations begin, the farmer has his cows. This is really one of those nice picturesque scenes with the hills in the distance which are in front of the Bernese Alps. I was glad to see some cows, as everywhere else in the village the cows have disappeared. My usual cow pastures are empty, although due to the heavy rains we have had I noticed that it was quite muddy for the cows in places, although the mud did not seem to bother them. They still walked around almost knee deep in it. 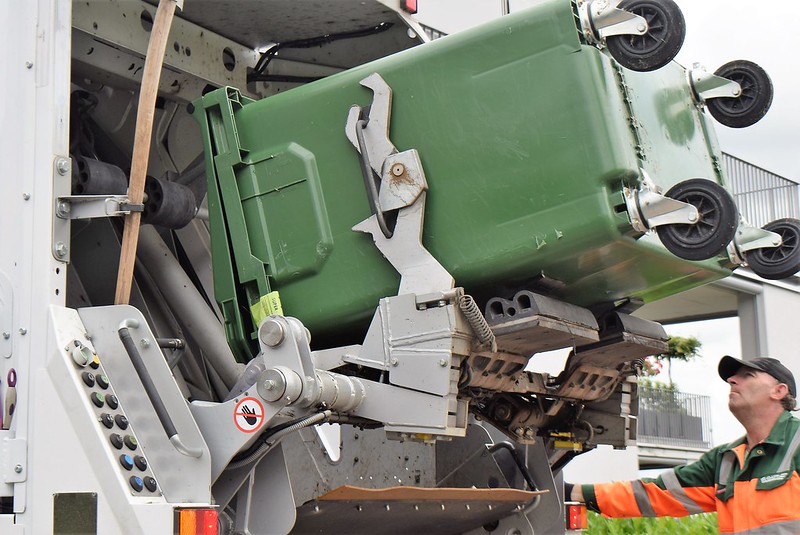 On my way through the village I met the garbage truck. I had to wheel past and so I took the opportunity of a few action photos. Our garbage trucks are quite clean and our rubbish is collected in containers which fit nicely onto the truck. It is all automated and the garbage men just fix the container to the truck. This was at the beginning of my wheelie. After I had done my round trip and was on my way back home I met the truck again and the garbage man laughed and greeted very friendly. 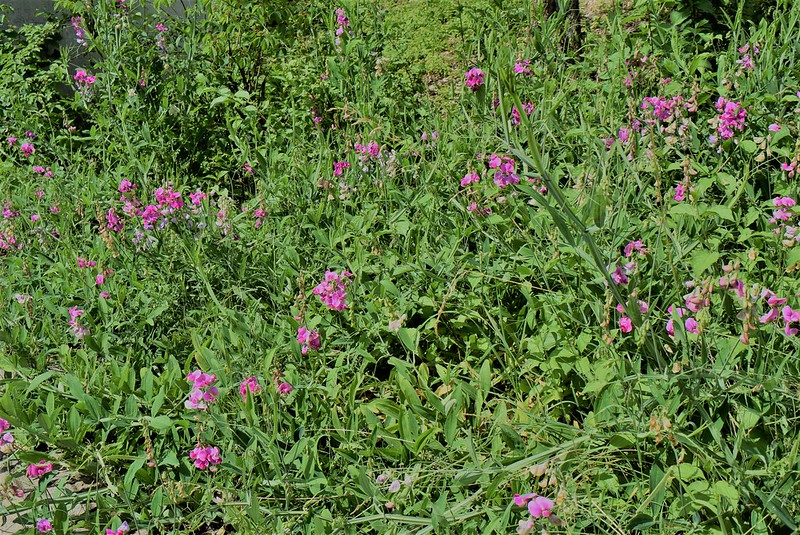 I noticed on our estate we have beds of sweet pea everywhere, the everlasting sort. They are also in our wild meadow opposite my apartment block. I feel a little guilty because when we move in there were none. I decided to plant some in my hedge to brighten it up. I certainly did, but the seeds spread everywhere and this bed in the photo is opposite our entrance as a result, so it is all my fault.

It was quite a nice little wheelie. I dressed in my t-shirt with short sleeves as I thought it might get a little chilly, but when the sun came out it was burning down as usual.

Have a good day everyone. I will leave you with some mushrooms I found growing beneath a fence to a garden on my wheelie. I do not know if they are edible, they look like champignons, but could also be a poisonous sort. I was surprised to see them. 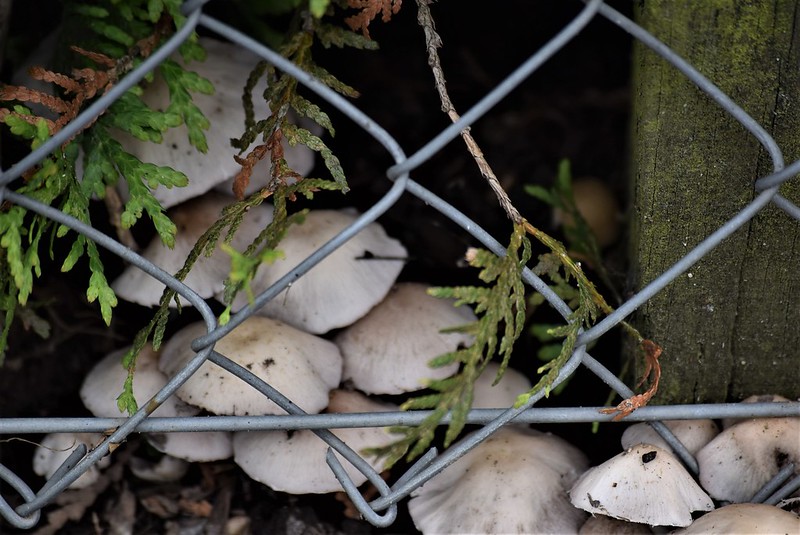