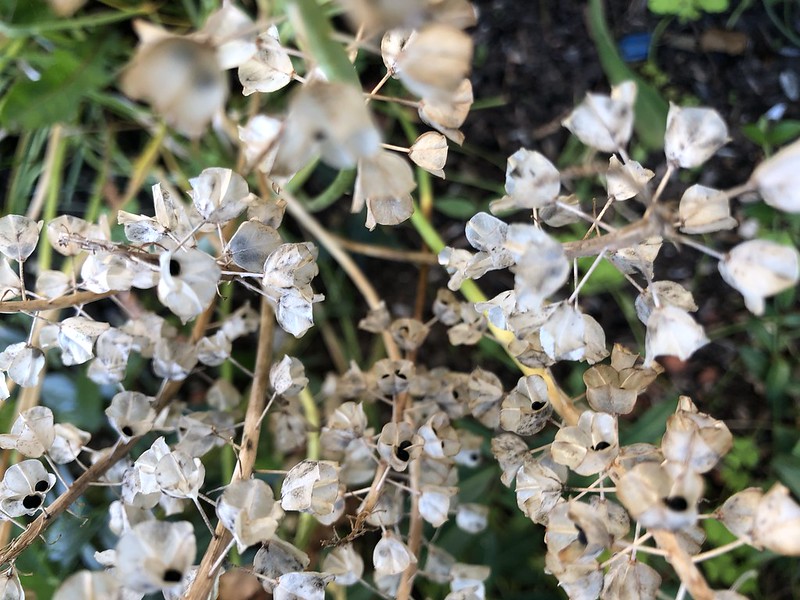 Grape Hyacinths after the flowers where the dry seeds remain. 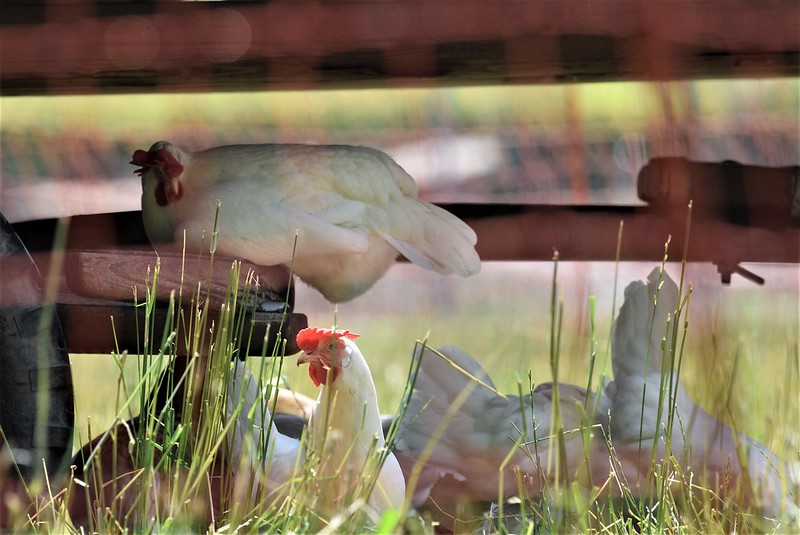 As a chicken I do like to get away from it all now and again: a peaceful place to rest my weary feathers and have a quiet sleep. 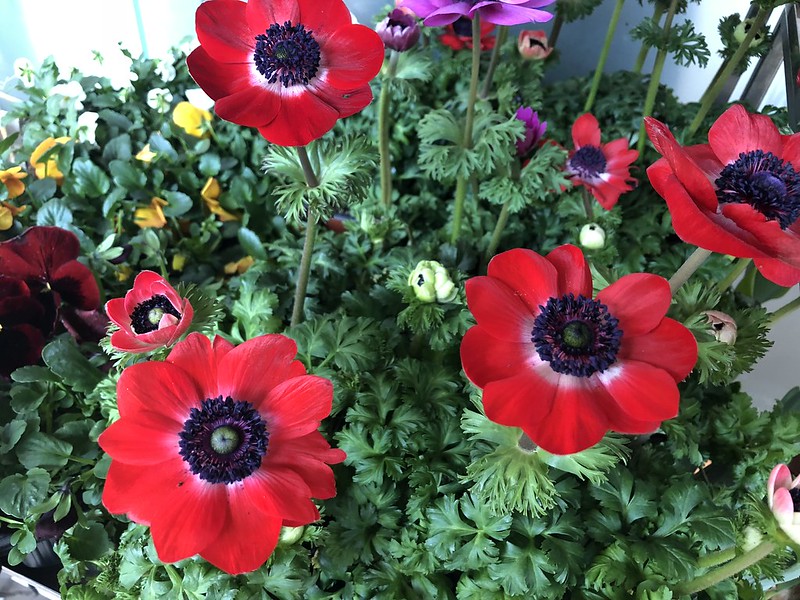 They are really beautiful in red, with all those details, Even the leaves are something special. 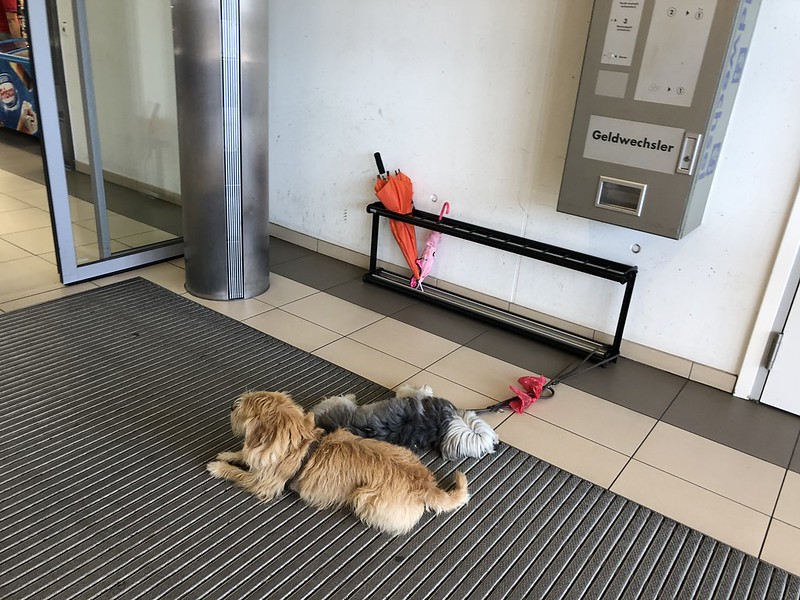 “Hey Monty, do you think she has forgotten us. Monty, Monty, I am talking to you.”

“Is that all you have to say, just “wuff”. It has been an eternity since she tied us up to that post. I have read about dogs being left like that. She could at least check now and again to see if we are still here and not stolen.”

“Wuff and cool down Cuthbert. I am enjoying this rest and no-one steals dogs who don’t know who there daddy was. They prefer a pedigree, like who was your great great grandfather and all that. Puts a bit of value on the ransom money.

Do you really want to be locked in one of those dog boxes outside? The last time she did that there was a poodle in the next box. He wouldn’t even share a bark with me, too busy trying to chat up the pekingese in the next box, said he didn’t have time for a rough one like me. No, this is comfortable so she should take her time.”

“But I am hungry and am fed up with all those strangers walking past and patting me on the head. I am slowly getting a headache. They could at least offer a biscuit now and again.”

“Stop moaning Cuthbert, you are too fat in any case.”

“Look I think she is coming, but she is talking to that lady she knows, the one with the bulldog.”

“Not that slobbering one. The last time he turned up I had to have a complete wipe down on the car seat and even that didn’t help. Nothing worst that sitting on a car seat full of bulldog slobber.”

“Keep calm Cuthbert, I saw the bulldog outside locked in the pen. All the other canines moved away as far as possible from his cage, they were getting sprayed all the time. What are you doing, stop acting so stupid standing on you back legs and wuffing all over the place.”

“I am just showing our owner how much I missed her Monty. You could also show some appreciation. It would mean double biscuits.”

“Double biscuits, might be worth a try. On the other paw I will stay where I am, she will give me a biscuit in any case. No reason to stoop to canine begging level. See, she gave me one  and I did not have to do degrading doggy stuff to get it. Cuthbert you still have a lot to learn.”

“But she returned, she did not forget us.”

“Of course not, she is a human doggy owner, they never forget their dogs and she had to pay for her dog licence, money talks all languages, even bark. Have you ever seen a hound left at the entrance to the supermarket. Even the slobbering bulldogs are taken home.” 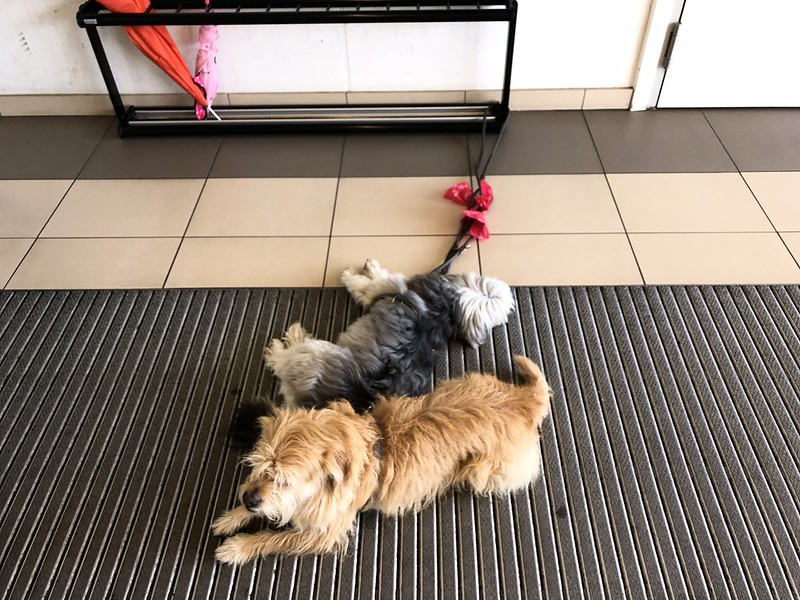 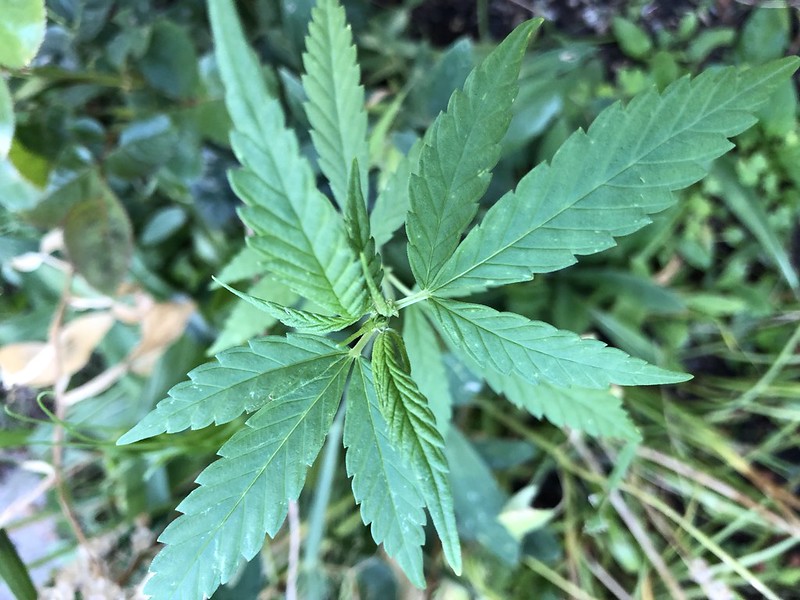 Let us begin the day with a plant, but not just a plant. Actually the gardener discovered it growing in a flower bed, he discovered quite a few, but decided weed(s) does not belong in a garden and gave me a sideways suspicious look. “Must have been from some bird seed” he said. I nodded in agreement. I could not have him thinking that Mrs. Angloswiss was planting cannabis in her garden, although they looked a little weak. I told him they are probably the male sort. He sort of nodded in agreement, astonished that I knew there were two types,  I told him not to remove all of them as I would like to keep one weed to see how it grows.  I noticed yesterday it is growing quite well, so another surprise in my garden. It probably was from bird seed, as some years ago I had some seeds from a colleague and they were the real thing. Even the neighbours were impressed, never having seen this plant before. 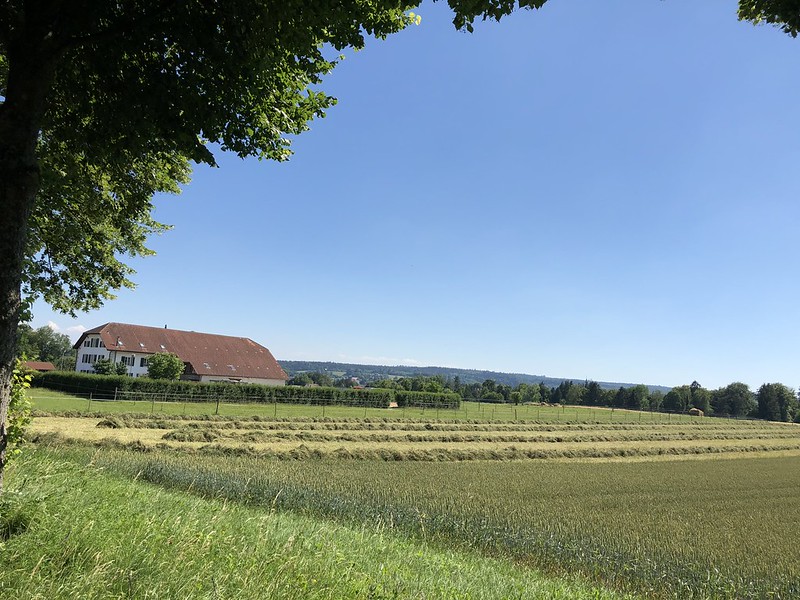 And now to something completely different. I went for a wheelie yesterday afternoon for lack of something more interesting to do. The heat wave days are slowly approaching and the sun was beating down on the wheelchair. I noticed I am developing a nice brown colour on my skin. Who would have thought that you could get such a colour in a wheelchair. And so I seemed to be alone on my journey, as the walkers do not like to go out in when the hot sun is beating down. It seems the farmers are now busy cutting the wild meadows as it is ideal weather for it to dry in the sun during the day, and to gather the hay to store in the barn for the animal winter food. 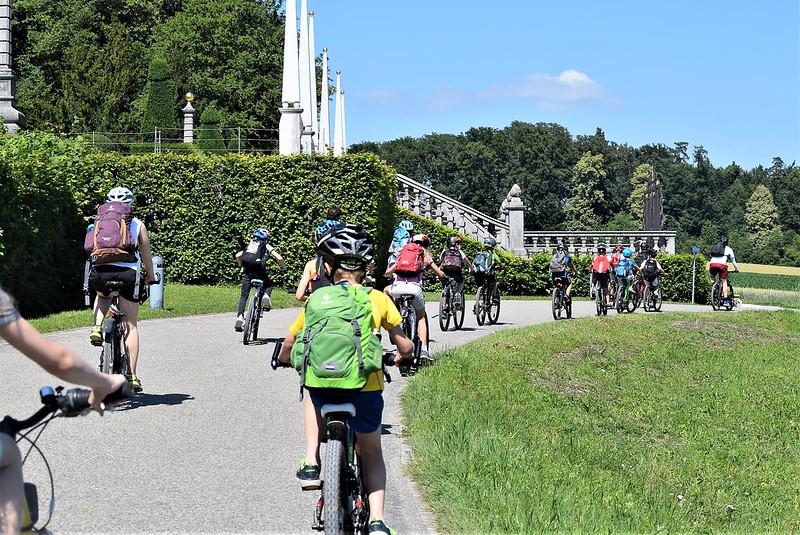 On my way around the castle I saw a  group of school children on their bikes. They had crossed my path a few times from the main road up to the castle and it looked like an organised excursion as the teacher was with them. Two days ago on our local roads, they had the bike tests for the school kids. They have to drive a certain marked route, with mini street signs around the town and surroundings and on the way they are watched by various police to see if they are doing everything as they should. It has been done for years in our Kanton, probably all over Switzerland, and is a good idea for the kids to know how to behave on the roads. I think this excursion I saw was a treat from the teacher with his newly qualified bike professionals in the class. They seemed to be having fun, and the weather was ideal of course. 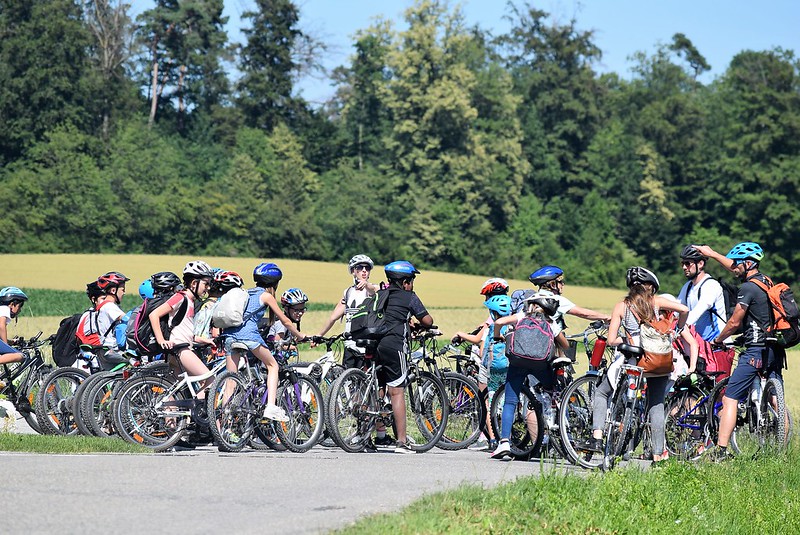 After and hour’s wheelie I decided it was time for home. It was really hot on the paths. The cows are still missing from the fields, but the grass is growing in their meadows, so they might be back, although probably some different cows. It is sad really I suppose. They have such a good life on our meadows, but a relatively short one. Today I think I will cook lamb for lunch, that usually comes from New Zealand, at least it is imported.

It is really a perfect wonderful summer this year. Plenty of sunny warm days and in between a real drench of rain to keep the balance. 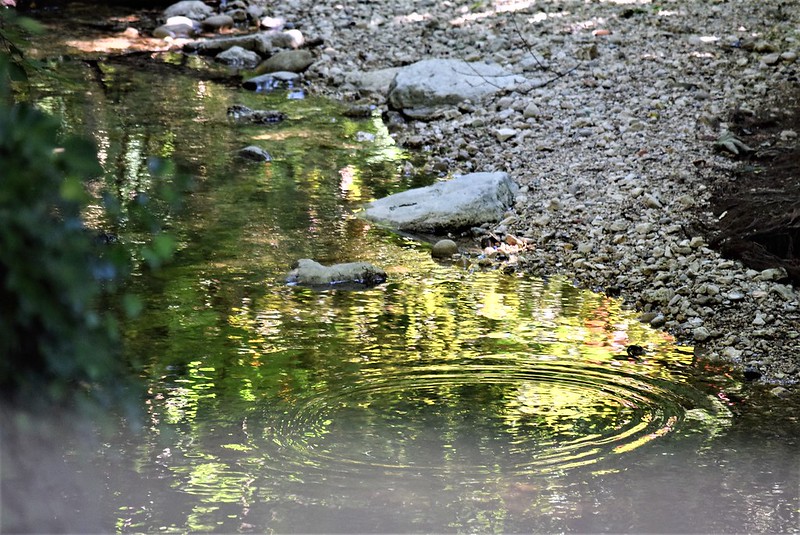 There are streams everywhere with enough water.

Yesterday we had a crisis at home. There was only half a bottle of Pepsi in the fridge left. I did report this the day before. The idea was that Mr. Swiss would buy six new bottles, but somehow it did not happen. It was then I heard that our enterprising autistic No. 1 son had bought cola on his expedition in town in the afternoon. I though how good of him to think about it, but when I saw his cola was a small can for I, me and myself, I decided to forget it. Anyhow I survived until the evening.

Our supermarket has a special offer at the moment. You fill a card with stickies and afterwards can exchange it for a small cardboard suitcase filled with various supermarket articles. There was a bottle of fizzy cherry drink, ice tea and orange. The orange looked very orange. Mrs. Swiss said it is cleaning liquid, I maintained it was to drink, but had another look and yes, it was cleaning liquid. We golden oldies should really be more careful, although I must admit it did look quite suspicious.

So now I must close down and get a move on. It is shopping day today (for six bottles of cola) and I have not yet said good morning to the vacuum cleaner. Enjoy you day and be careful what you drink, it might be floor polish. I will leave you with some daisies I saw growing in the village near the church. If you know their name, please let me know. 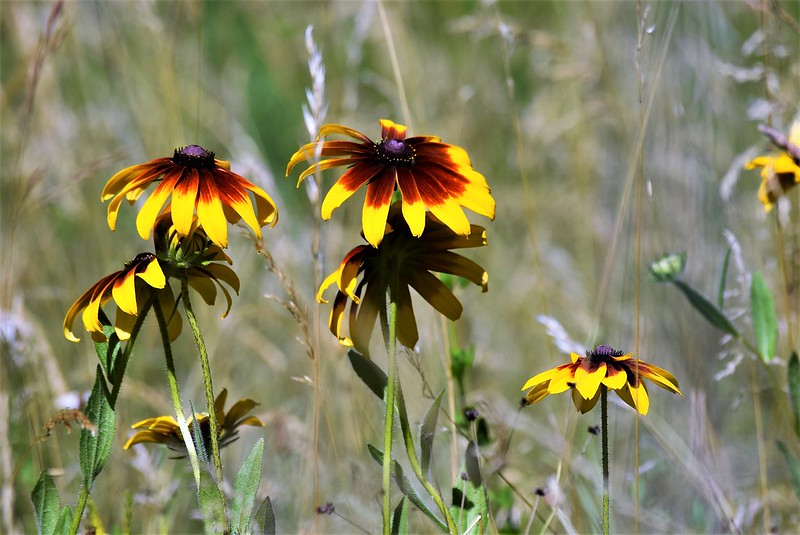