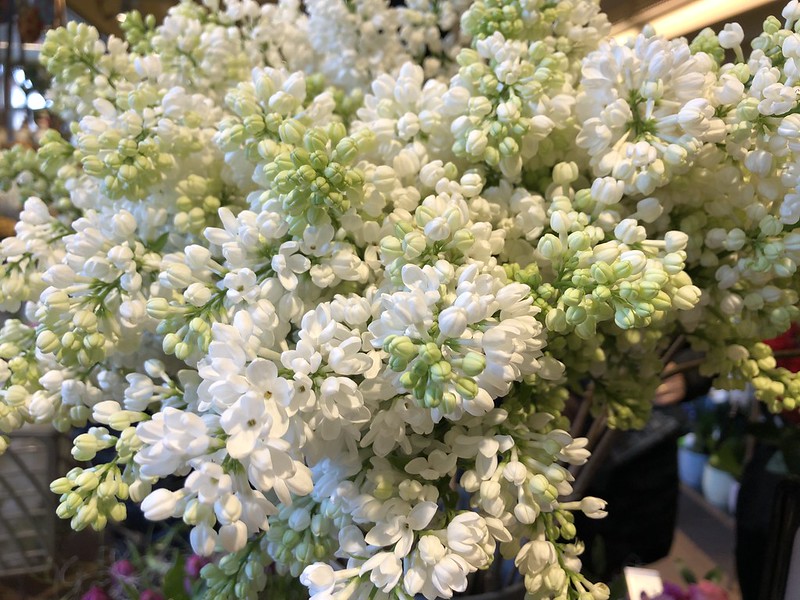 Another one of those flowers that I am not sure of the name, but there are certainly plenty of flowers making a great show.

My heart was bleeding but then it was dry
John slept with my best friend, I hated the guy
I poisoned his coffee, and then he was dead
I missed him at first, in my empty bed
And then I met Frank, he was the man of my life
He had plenty of money, so I became his wife
He had a weak heart, but was 70 years old
I pushed him down the cellar steps, and his body was cold
But life on my own was not very good
It was then I met Robert, he belonged to the hood
Life was exciting, he was chief of the guild
I had an accident with a gun, and then he was killed
My life as a widow was becoming a wrack
I only had dresses in many shades of black
There is a moral to this life, you should never get bored
Change your husbands like underwear, set up a record
Somebody told me it all rhymes with heart
But the only words I found were “’till death do us part”. 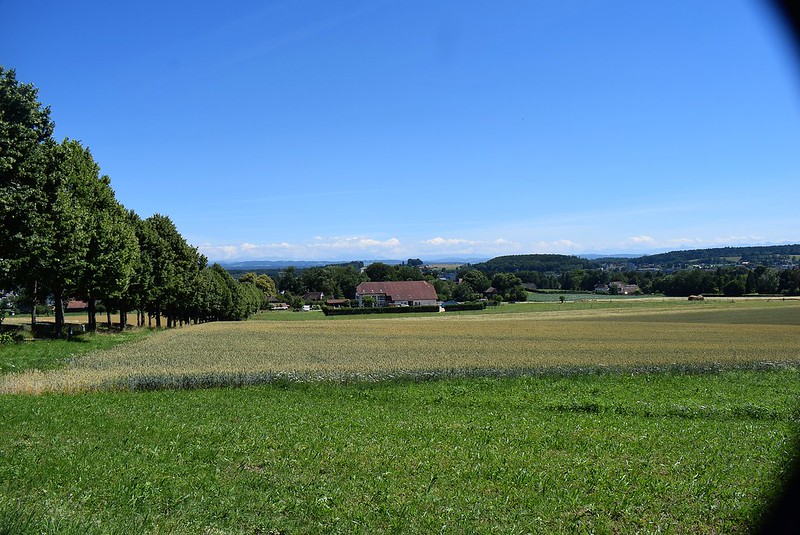 I was out and about again yesterday afternoon on a round trip. We had wonderful sunny weather, a bit of a breeze, but for a wheelie it was fine, so I went on my way dressed in shorts and a sun top with a bag containing a camera with two extra lens. There are advantages to sitting and travelling, not having to carry everything. I headed to the top of the hill where the castle is and had a wonderful view across the flat plain which eventually leads to the Bernese alp range, although the atmospherics did not give such a clear view to the high mountains.

The farmhouse on the photo is where the stables are, with the chickens, goats, swans.  ducks and geese: not forgetting the horses, although they seem to remain inside when the weather gets hotter. 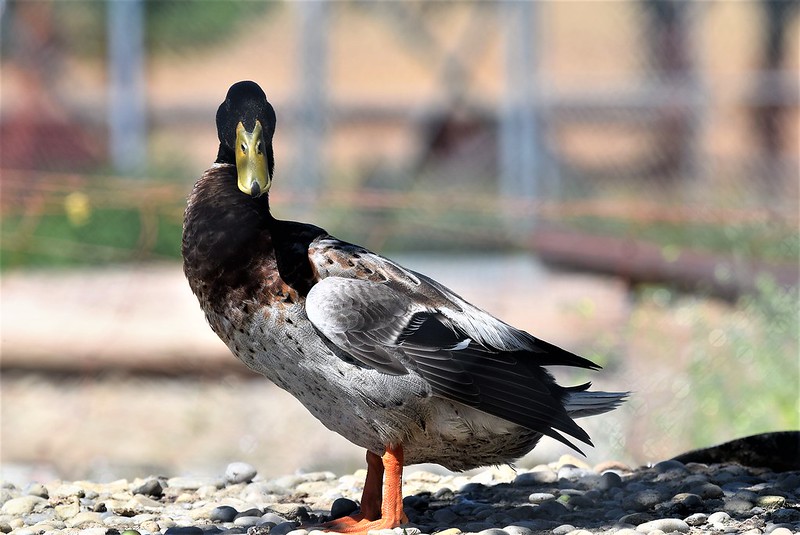 This ducks seems to have got a little curious when he saw me. Actually the ducks were all gathered together: it seemed that there was a conference being held. 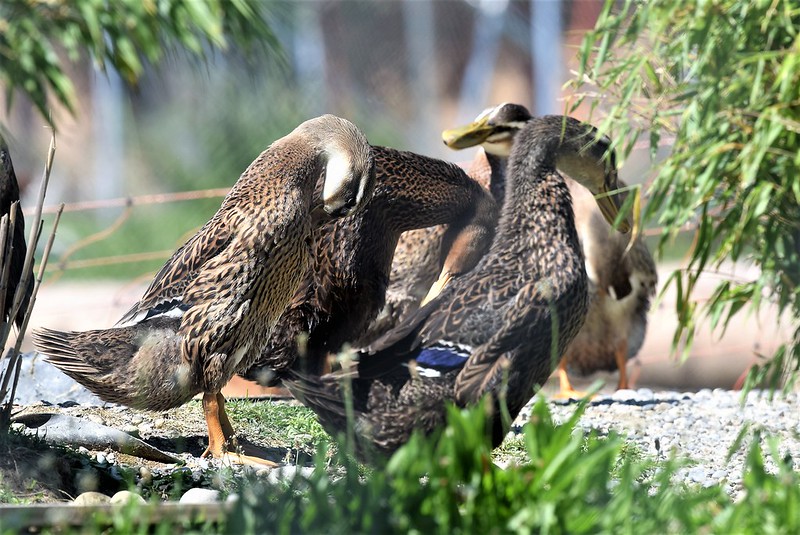 Although I think the dicussion was more on about how to clean your feathers and the latest duck feather fashions.

I decided to move on as I was on a little quest to take a few photos of the only pond we have for a blog. In the senior residents home they have a water lilly pond. I noticed they had put a small circus tent outside the castle in the grounds so had a wheel up to have a look. 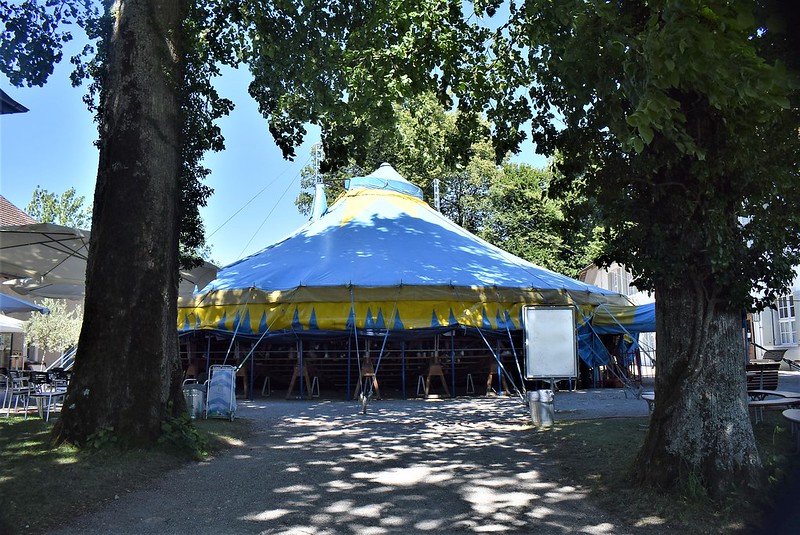 The tent was full of people watching some sort of action. There were no animals, just actors and I think it was to do with the problems of health care in other countries and how the doctors were trying to help. I stopped and watched a while and then moved on. 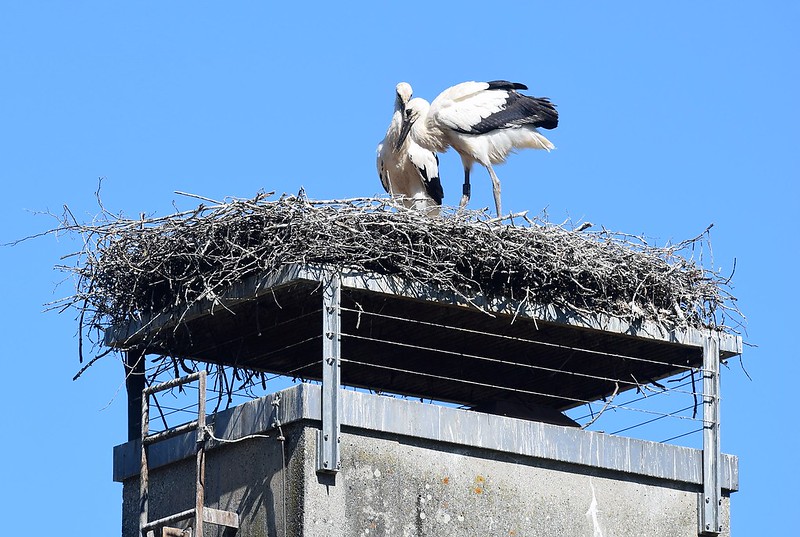 I passed the local stork family up on their tower in the grounds of the local high school, but it was only mum and dad. I think the three kids have now flown off and beginning to build their own life. When baby storks are no longer babies, they need quite a lot of room in the nest.

I eventually decided it was time to go home, not wanting Mr. Swiss to get worried, although he never seems to be worried. I was away for two hours, but time goes fast when you are having fun with a camera and enjoying the fresh air. Before my mobility problems began to happen, I never really went walking very much, just now and again. Since I have my electric wheelchair I am out almost always in the afternoon, when the sun is shining.

Yesterday I almost had a little stress, yes even we golden oldies can have stress. I returned, wrote a blog on a prompt, and then prepared the evening meal: nothing spectacular, but now and again I do it myself. It is usually a Mr. Swiss chore, but I decided on a prawn cocktail with avocado served with toast, which is a bit more than a plate of cold cuts and tomato and cucumber.

After the meal I still had a couple of things to do on the computer and then uploaded my 80 photos I had taken on my wheelie trip and labeled them all. Afterwards there were a few bits and pieces to iron and it was already 10.00 in the evening. I moved onto to giving myself an injection for my MS and then eventually sat down in front of the TV to watch the one and only soap that I ever watch. Actually the only programme I bother with. Luckily Mr. Swiss records it so we can watch it in leisure: it is East Enders, with the usual families and petty dramas they have. I grew up in the East End of London, one of the reasons I like to watch it. They speak the same type of language that I speak and I can associate with some of the situations although we never had so much drama at home.

Eventually I sank into my bed and was soon in dreamland.  Sometimes life can be almost a full time job. I had a strange dream. I was in the office where I used to work and the owner of the company walked past my desk and saw that I was surfing in internet. “That will be blocked” were his words. The funny thing is I never surfed at work. They were the days before I was even a member of Facebook. Gaming and all that stuff only started when I was a pensioner at home and eventually I decided that was not the essence of life so did a cold turkey and stopped. The only thing I now do on the computer is pay my bills and write some bloggy stuff, as well as working on my photos.

And now to move on. I do not go anywhere on Saturday morning, I send Mr. Swiss for any bits and pieces we may need.  I will take it easy, living the luxurious life of a housewife, building up to the daily lunch. 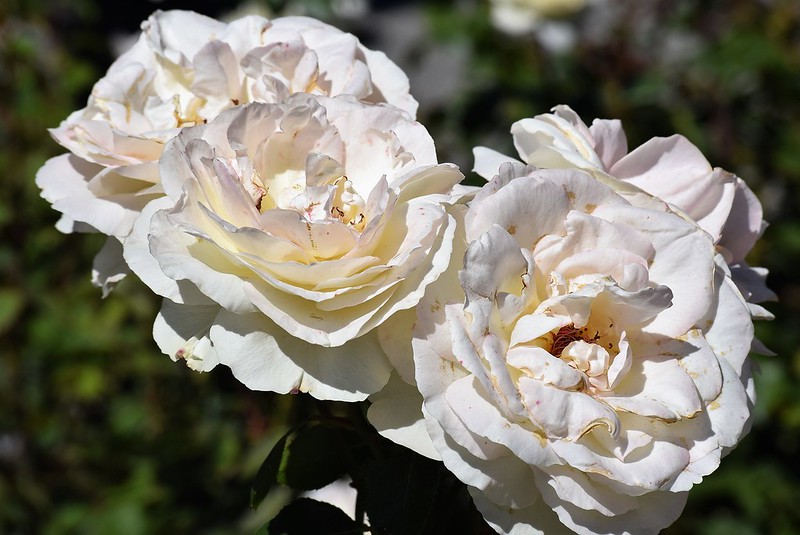 I will leave you with a rose greeting from the small garden of the local senior citizens home. Enjoy the day/night and see you around on the flip side.