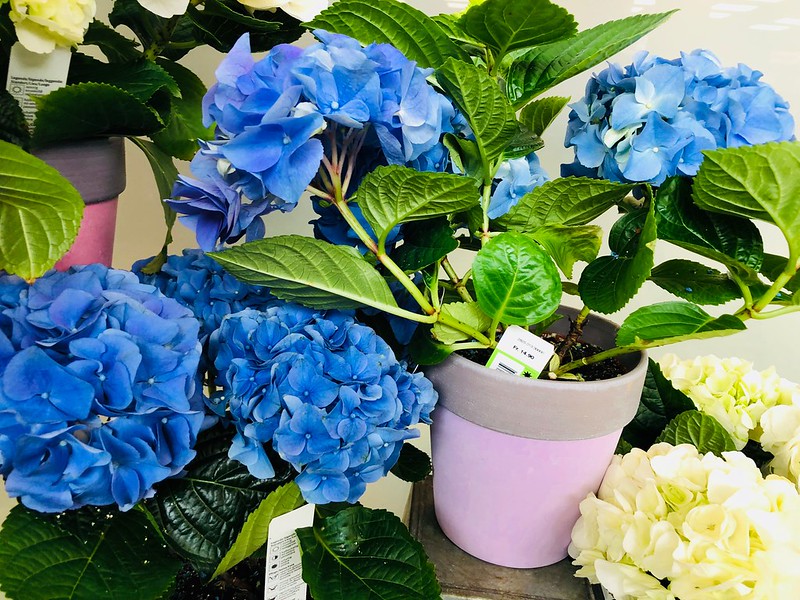 It seems you have to acidify the earth if you want to keep your hydrangeas blue.

Does it have to be something I like to eat.? Not really, because there is a point when it is no longer an indulgence, but a regular thing. I like to eat potato chips (what I knew as crisps in England), the finely sliced potatoes with a salty flavour, perhaps with paprika, or …. well you know it, there must be a dozen varieties of taste and flavour, but that is not an indulgence, nothing special, I do it when I feel like it, mainly in the evening when reading. 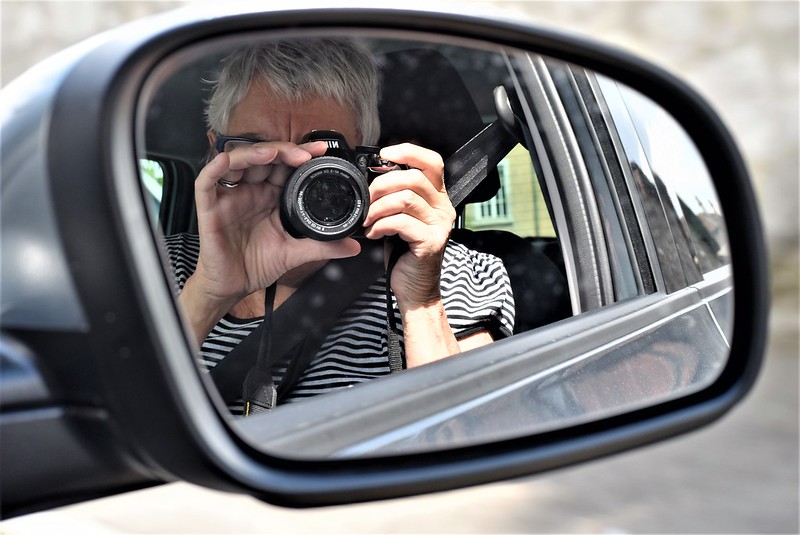 I take photos, wherever I am I have a camera. I sit outside eating dinner and suddenly a fly arrives on the table, cannot blame him, they like food. I take my mobile phone and manage to get a closeup of a nice fat green fly as he sits and ponders about his meal. The phone camera is only a small part of the equipment. It is handy, always there, and since I indulged in getting an iPhone X it is a clear case. I even have a direct connection to my online Flickr photo album, so my photos are automatically uploaded in a few seconds. 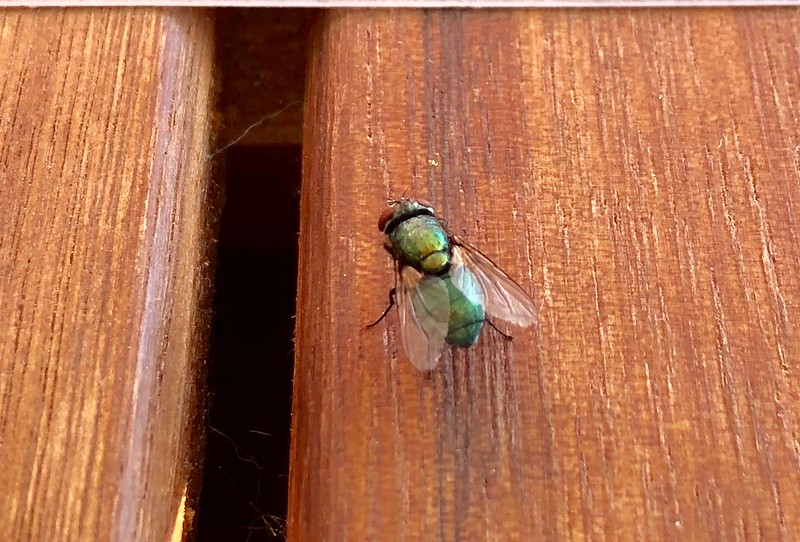 Long walks are no longer possible, but I have an electric wheelchair. Do not pity me as I make the most out of everything and anything. I used to make do with one standard lens on my Nikon because I was then managing with a stick, now I can take a camera with lens, and two extra lens in my shoulder bag in the wheelchair. If the weather is good I am on my way taking photos of trees, of cows, ducks, rivers, fire trucks, tractors and perhaps just garbage heaps or building sites. There are so many possibilities. If the sun is casting a shadow somewhere different, then take a photo. If you see a nice big spider, then he is the next subject. You might even capture the hairs on his legs. Flowers? they are everywhere, so get them in the picture, the closer the better,  and if there is a bee or wasp having a pollen lunch, all the better.

Shopping is done by car, but no problem. As you can see in the picture above, a photo can be take from a car window. Today I had a little tragedy, I forgot my camera when we departed for the supermarket. No problem: Mr. Swiss found I can do without as an exception, but where you have an iPhone or whatever, you can still take photos. This afternoon the sun was shining, there were clouds everywhere, the nice artistic big ones with the sharp edges. They were floating in the sky and inviting me to take their photo. I take photos of everything and anything. Is this an indulgence or an addiction. It makes no difference, it is fun. 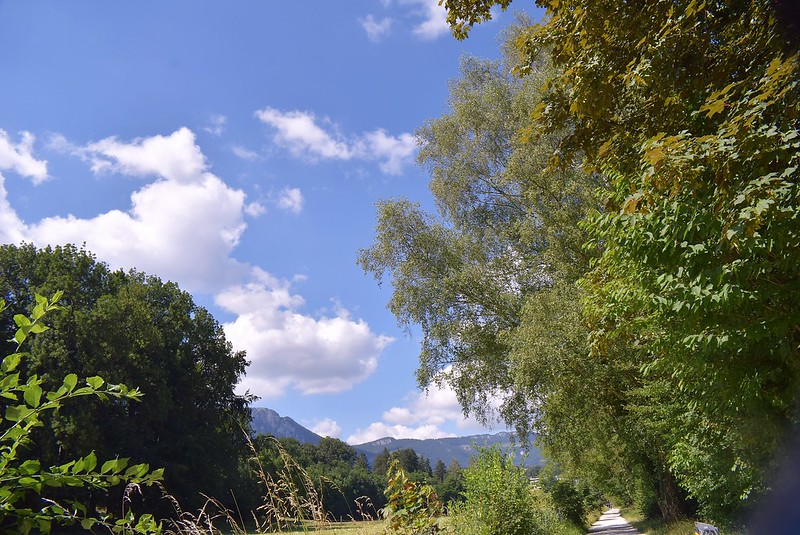 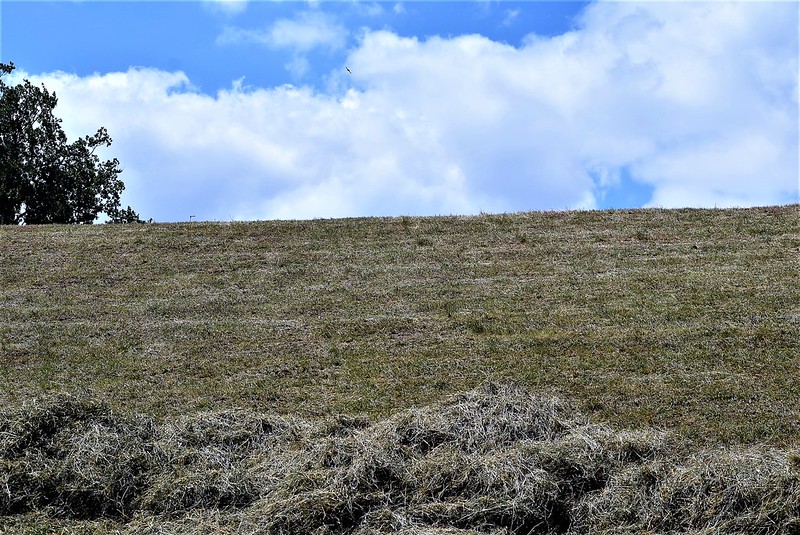 This is what a meadow looks like when it has been mowed down and the dried grass left to be collected for the hay in winter for the animals. Everyone does it where I live in the village, and nothing is wasted. Even where I live we have a space between the appartment blocks that belongs to no-one in particular, perhaps the ground owners, and so we also have a meadow. 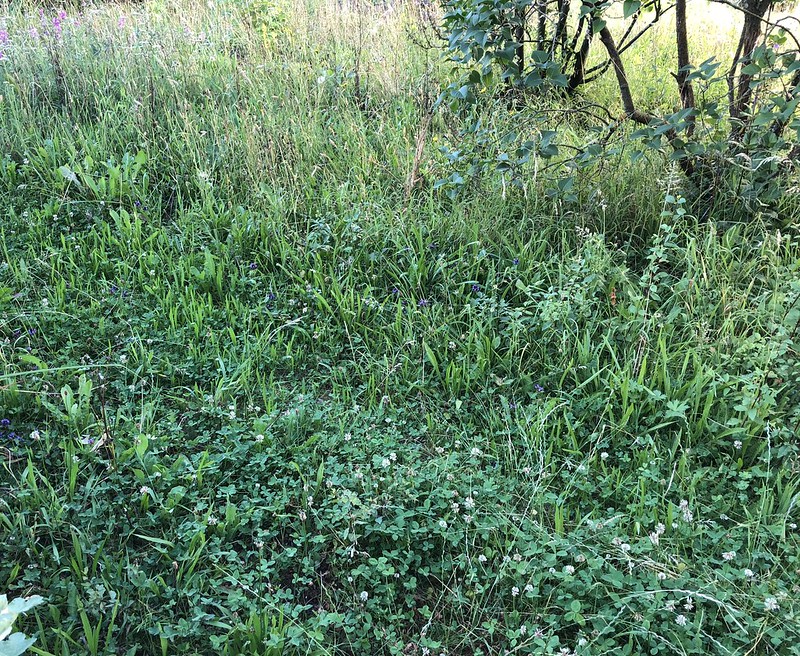 This is what it now looks like. The dandelions disappeared some time ago and left their seeds behind somewhere. The cornflowers have also gone, together with the daisies and now we are left with clover. This is a tradition where I live. We once had a neighbour that decided it was a mess and mowed half of it down before we explained that you do not touch this meadow until the second half of June to ensure that the seeds have spread and will grow again next year. The problem this year is that it will be July at the week-end and the meadow is still growing. It seems we have been forgotten this year. Luckily my gardener always cuts a narrow border between our garden and the meadow to keep it away from my garden, otherwise my lawn would become an ideal place for cows to graze, or sheep. 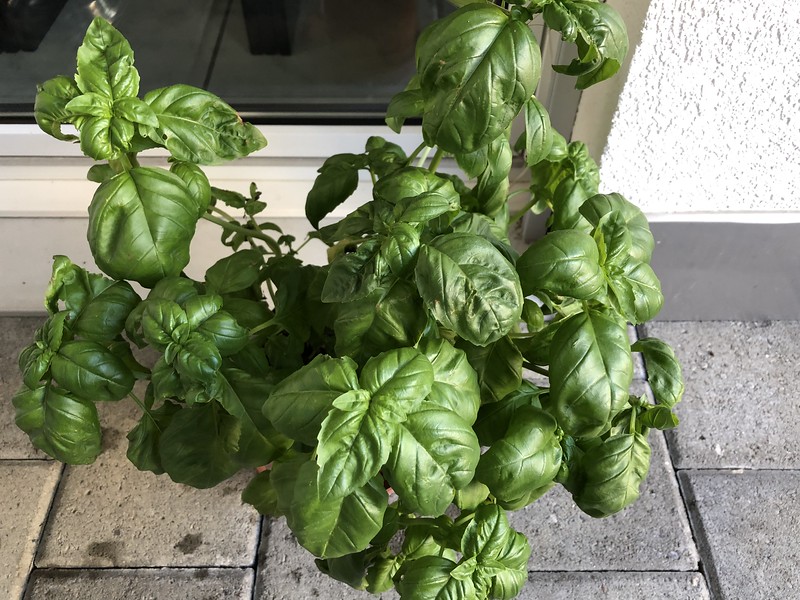 They were again selling basil in large pots in the supermarket, so I treated myself to a pot. I like the basil leaves in a tomato mozarella salad where you alternate the slices of tomato and mozarella with the basil leaves and cover it with a salad dressing according to your taste. This has not yet been done, but I am thinking about it. When I bought the plant we still had a few rainy days and I put it in a spot where the sun afterwards arrives. This seemed to be a staple diet for slugs and I noticed that my nice big basil leaves had chunks removed by the 2-300 teeth that a slug has. We now have the sunny rain less days, and I have shifted the pot to the shade in a corner where it seems to be developing. 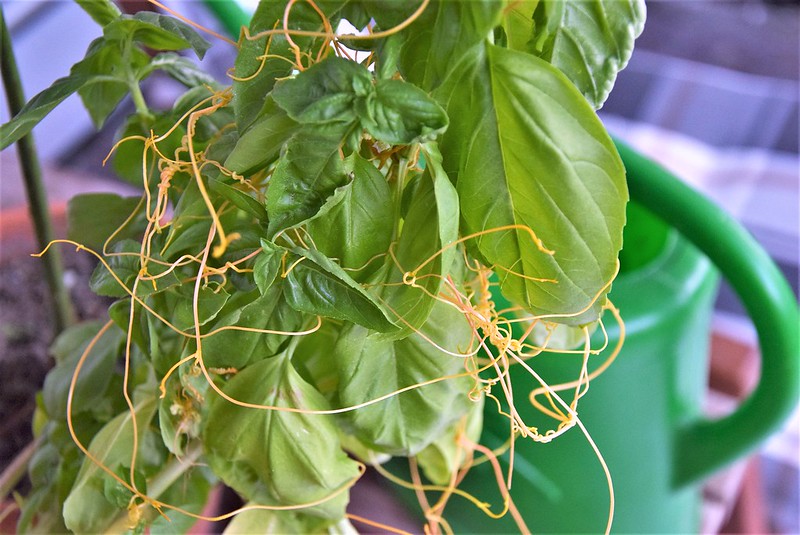 I also had such a plant last year and at the beginning everything was fine, until this strange growth began to appear. At first it was a lonely thin white stalk and I though that the basil was growing roots at the joints of the leaves, which can happen. It began to grow and encase my basil in its creeping stalks. Eventually an expert in WordPress (thanks Tony) told me it was probably dodder. I had never heard of this plant, so did an exploration in Internet and the result was that eventually my basil was put in the garbage before it decided to take over my garden. As it was in a pot it was isolated. Apparently there are places where dodder takes over a garden with its parasitic abilities. I do not know where the supermarket gets its herbs, but this year I did an examination of my basil before buying.

Yesterday was a day at home as I had things to do. The cleaning lady did a perfect job. Every second week she does the kitchen as well. I do a general cleanup daily, so it is just the details she deals with. She is a real pearl. I was reading an article on a page I often visit about MS experiences written by people like me and it was about the financial side of the disease, that if you can afford a cleaning lady  it is a great help. I discovered this myself. I still do my daily housewife chores, it keeps me fit, but cleaning a bathroom or shower has got too much for me and I have been lucky enough to find a lady who does exactly the work I need.

Yesterday was also No. 2 son’s 44th birthday. He lives on the other side of Switzerland, but works in a town near us, so he also has an apartment there and paid us a visit yesterday evening. Time goes so fast, and he is now father himself, but I still remember the days when he was the same age as his 9 month old son. When he tells me of the first walking attempts of his son, I remember those of my son, and he was also walking independently at the age of 10 months.

Today I am again on a safari in the supermarket. so I will now move on to my daily chores. It looks like another good weather day, so I will probably be out an about this afternoon. See you around later, look after yourselves. 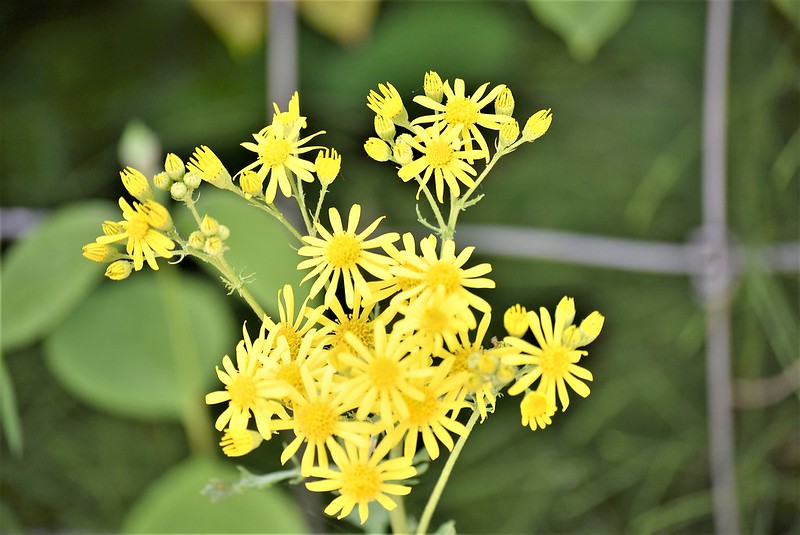