Things your felines should know 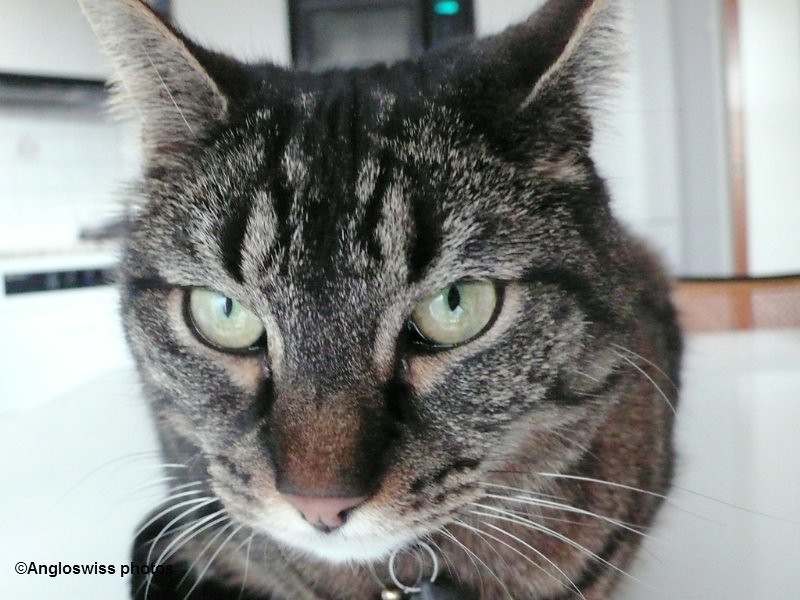 While walking on the beach you stumble on a valuable object buried in the sand — say, a piece of jewelry or an envelope full of cash. What do you do with it? Under what circumstances would you keep it?

We do not have beaches in Switzerland, at least not with an ocean to accompany it. We have lakes that have beaches and the only things that might get washed up are empty cans, bottles and food wrappers. The jewellery and money are all nicely kept in the banks.

However, we do not despair, a Swiss active pastime on holidays is hiking: walking on paths through forests, up and down mountain slopes and it might be that something is laying on the wayside waiting to be found.

Some years ago when the kids were still kids and Mr. Swiss and I were active members of the human race, we went on such holidays in the Swiss mountains. One of our favourite places was the village of Gstaad. Your might have heard of it. It is where the rich and famous spend their holidays in their luxury chalets or five star hotels and they are waited on hand and foot by the normal people. The village has quite a few shops, mainly in the exclusive line of things. If you want caviar for tea or smoked salmon for breakfast, they have it. They have shops selling exclusive watches which only the rich can buy. Of course there is also a supermarket for the common people. Curd Jürgens, Gunter Sachs, Julie Andrews, Roman Polanski are just a few of the chalet owners of Gstaad, their chalets resembling wooden palaces. I have been there and seen it all and it is a pleasant Sunday afternoon walk in the exclusive areas where the gardeners are busy attending to the gardens which resemble parks.

Of course there are normal working people, as me and the family, that spend their holiday in a rented chalet somewhere on the edge of the village that can perhaps afford the cost for two weeks. That is the situation, so what does family working class do during the day? We go for walks in the countryside, all the paths nicely marked with a yellow sign. Yellow means for the beginners. If you stumble upon a red and white marked path, then ensure that you are wearing hiking boots for a good grip, as that would be a mountain path. Basically we all wore hiking boots with nice thick comfortable socks to keep a grip, whether a footpath or mountain path.

It happened one day that family Angloswiss with two sons departed around tenish in the morning (we liked to take it easy, no six o’clock morning tours for us) and took a planned march to one of the smaller mountains. They are not all snow-capped, that is reserved for the mountaineers. On the way Mr. Swiss made an exclamation. I checked to see that he had not fallen into a crevasse in the rocks and broken his leg. This was not the case he was standing quite firmly on the ground with a watch in his hand.

“Look what I found on the path” he said “it is quite a nice watch, but not such an expensive watch” and he put it on.

“You are not planning to keep that watch, it must belong to someone” was my answer, thinking of the owner now furtively searching in the nooks and crannies of the Bernese Overland for his timepiece.

“I cannot see anyone looking for it” said Mr. Swiss. I could not believe my ears, thinking of a tired wanderer without a watch. Before I could reprimand Mr. Swiss, we heard footsteps coming closer and a family approached us with their noses turned towards the ground, obviously searching.

“Are you looking for this?” asked Mr. Swiss.

“Yes” they answered with thanks in their voices: not exactly tears in their eyes, but it was only an average watch and not exactly a Patek Philippe, Rolex or Cartier. They thanked us for finding the watch, not knowing that it almost became a holiday souvenir: after all, you can always use a new watch. You do not just throw them away and let people find them, leading them into temptation.

There was another occasion; this time also in Gstaad (yes the paths are strewn with keepsakes in this mountain village) and family Angloswiss were marching to the Launersee, and well-known lake in the area. On the way we decided to take a rest on a bench. They often plant benches on these paths for tourists dying of thirst or exhaustion. It was my turn, I found a camera on the bench. Before someone could say anything, I put it in the rucksack (another part of the tourist uniform) and told Mr. Swiss when we reach the restaurant I will ask the waitress if a customer had missed a camera. We arrived safe and sound at the restaurant: I remember there was even a Puma helicopter parked there from our army, the crew probably wanted a beer before flying further: or was it just for the tourists?

We ordered our refreshments and I told the waitress of the camera. Did she thank me, did she praise my honesty? She told me I should have left it where it was as the owner would return to find it. It was none of my business to take it with me and I was being very stupid. Oh yes, we Swiss are so logical when it comes to honesty. I was speechless (a rarity for me), but said nothing. Mr. Swiss was ready to say something, but we kept our remarks for afterwards. After returning to the village of Gstaad I called in at the police station, manned by one solitary policeman, and gave him the camera. He thanked me and took my particulars. I think he was the only policeman in Gstaad as an hour later I saw him directing the traffic on the main road.

I thought no more of this event. After a few days we returned to life in the lowlands, with some happy memories of two weeks spent in the Bernese Overland, the playground of the rich. I received a telephone call from the camera owner, praising my honesty and happy to have his views of the mountain scenery and family again. He even wanted to reward me. It is actually custom; almost law, in Switzerland to refund 10% of the value of lost property. This is something I have never claimed as I find it insulting. The man who had lost the camera showed his gratitude with some sort of gift, I think either chocolate or a bottle of wine by post.

So there you have it, the Swiss are an honest nation basically, if you find the owner of the lost property otherwise, we are just human.

Daily Prompt: Finders, Keepers? The Paths are strewn with Souvenirs if you are lucky