When was the last time a stranger did something particularly kind, generous, or selfless for you? Tell us what happened! 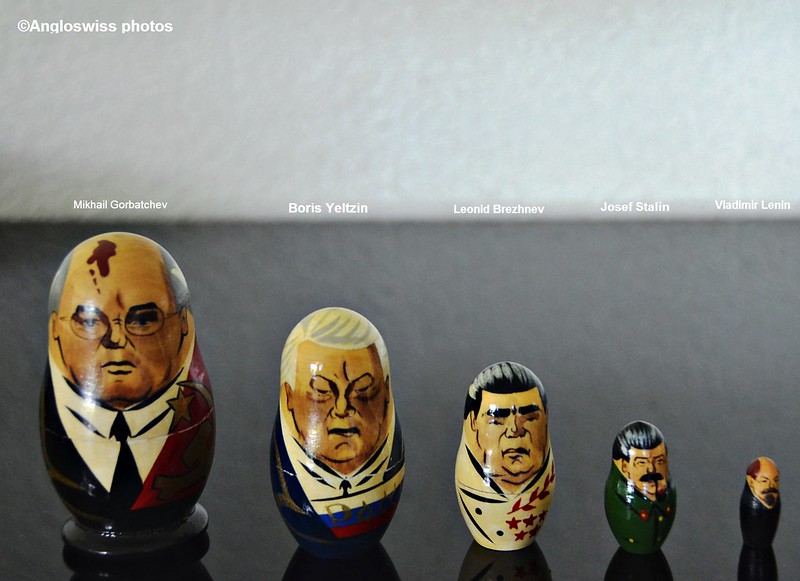 What do these models of past Russian Presidents have to do with the theme of today’s prompt? It is due to the kindness of strangers that you remain on this blog, reading further, and not deciding to leave, thinking who is this crazy Angloswiss with models of Russian Presidents. We only know each other through blogs, through pingbacks (those that are not allergic to pingbacks) and meeting on the daily path of prompt, when it works.

First of all a little history to these little models of past Russian presidents: it was many moons ago when I decided to learn Russian. I was then at the interesting age – around fifty years old, when you know everything but no-one believes you. I was again one of the oldest in the language course. Some of the younger members were agile enough to risk a few months in Moscow learning the language where it was spoken and the acts of kindness were that they brought you a present. There is a souvenir in Russia known as “Babushka Dolls” (Babushka = grandmother) with lots of little old ladies put inside each other, but as I was probably on the wrong side of 50 for such a gift, my friend brought me “President dolls, which still possess a place of honour on my bookshelf. They can be screwed open in the middle and placed inside each other, Lenin being the smallest and Gorbatchov at that time the largest. I almost lived with them all, except for the two on the right, Lenin and Stalin. Lenin was the daddy of it all, the no. 1 communist leader (although he borrowed the idea from a guy known as Karl Marx) and Stalin died when I was ten years old, so I really only have a vague memory of his funeral on the TV.

I suppose there might be a more modern version today, showing Mr. Vladimir Putin as the daddy of them all, so if he is not stabbed, shot or poisoned, he will still be the No. 1 of the President dolls.

So now I have been able to show the photo of my little souvenir brought from Russia as a gift of kindness, and you may now relax, having got it all behind you.

Unfortunately during my life of toil, blog and unexpected happenings I cannot remember one physical case of a stranger being particularly kind, generous or selfless. Do I have a “Beware of the Dog” sign hovering over my head? Are there two long corner teeth resembling fangs and dripping blood? Perhaps it is the general unfriendly aura that surrounds me when I walk through the streets pushing people out of my way.

I remember once, a few years ago, on a working day when I paid a visit to my physiotherapy bloke. I believe I was recovering from my broken arm and he was manipulating it back to the normal arm world. On my way to the station after the visit I had to cross the road and there was an open manhole cover: before you grip the sides of your office chair and clutch the keyboard in fright, no I did not fall down the manhole. I am very careful with manhole covers. Unfortunately I was so careful that I did not notice the two cables leading into the manhole and yes, I tripped over them. No problem, I suppose I did resemble a nun giving her vows as she lays prostrate on the church floor, but this was the pavement, and I was not praying, just cursing under my breath and checking what was broken.

Luckily nothing was broken and yes, no-one bothered to help. It resembled one of those film scenes, where the victim is beaten and left lying on the ground, and the crowds ignore him and walk past. I believe it was a Lino Ventura film where it happened, but so long ago that the grey cells of the brain that are never renewed when they die, took the memory with them. Anyhow to continue, there I was the star of a gangster movie and ignored.

I pulled myself together and discovered that my two legs were still functioning so I stood. My jacket had a black stain from the ground and I believe there were a few other marks on my face and body. Where did I fall? Just a few steps from the entrance to my doctor. This was perfect, so I dragged myself into the practice and arrived at the desk. The nurse threw a glance in my direction, and immediately called the doctor. No words were really exchanged. Within a few minutes I was lying horizontally on the bed and being examined. I was cleaned up, the cuts and bruises doctored and released with the warning to take the day off and not return to work, which I did not intend. I walked limped to the railway station, which was luckily just around the corner, and arrived home. I called the office to say I had an accident and would remain at home for the day. Through my history of accidents that just happen most of the time, my boss told me to take it easy and only to return to the office when I feel OK. I have a certain reputation for falling down in the wrong places.

So there we are. Sorry no stories of Swiss heroism, William Tell similar occasions and if he had to shoot the apple off my head he would probably have shot through the head and not the apple, the story of my life. So thank you blogger colleagues for your visits to admire my gifted writings, and I will see you all on the flip side on the grid, if it is working. That would be another story, but as I have not yet received an apology, explanation or acknowledgement of my complaint from WordPress, I will be patient. I realise they have such a stress, especially after the great new look.

Daily Prompt: The Kindness of Strangers?