As a kid, what did you want to be when you grew up? How close or far are you from that vision? 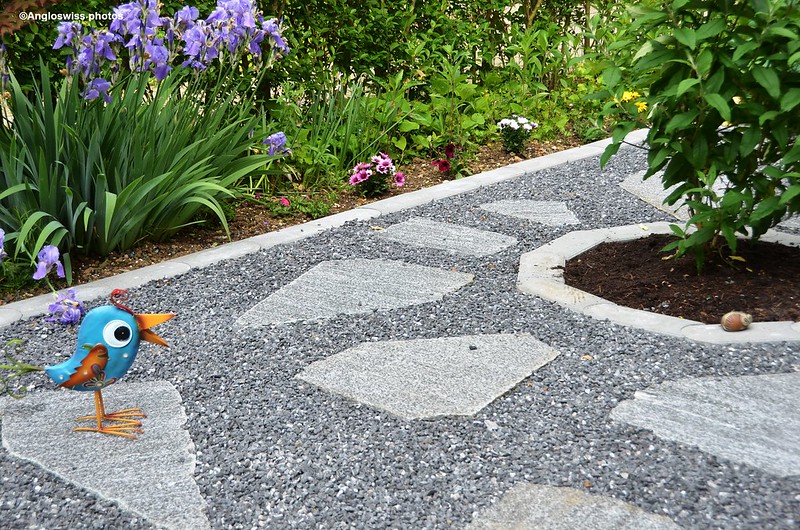 I made this little bird happy when I adopted him the day before yesterday. He was sitting, forgotten and lonely in the corner of the flower department in the supermarket. He did not even have a price ticket on his sweet little claws, like his brothers and sisters. He was a blue bird and all the others were green, so he felt more left out, excluded from a happy life guarding his own territory and then I came along.

They had a special offer going for orchids. I collect orchids and I had one spare orchid container for another orchid. I now have the non-flowering collection outside on the porch hoping they will go forth and flower, but the flowering orchids are inside in the living room. Mr. Swiss was in a generous mood, which he always is really I suppose, coming to think of it. He pressed a twenty franc note in my hand and said buy one. They were half price (otherwise I would not have bothered) and I selected my orchid. In the meanwhile Mr. Swiss had disappeared outside the supermarket. He needed to breathe the fresh air of escape from the relentless traffic of trolleys filled with hunting trophies. It was the day before Ascension day when Switzerland has a national holiday, and everyone was buying food to cover the day of famine.

He did not actually say keep the change, although the orchids were only about eleven Swiss Francs. It was then love at first sight. The little blue bird looked at me with metal tears in his eyes and I pounced. A week ago my lawn in the garden had been transformed into a stone desert and he was the dot on the “i”. He had his price, nineteen Swiss francs. You see I was not being greedy. Mr. Swiss gave me twenty, I spent eleven on an orchid and nineteen on a metal bird, so I even donated about ten swiss francs myself, it was all in a good cause.

Another advantage was I spent more time than programmed in the flower department, so Mr. Swiss was impatient to go home. No questions asked “that’s a nice orchid” he said after a quick glance through the plastic bag, and then “What’s that?” followed noticing a mysterious clank when I settled the metal bird into the car boot. “Just something for the garden” and we drove off. He did ask “how much was the bird?” and I gave him a truthful answer “nineteen Swiss francs”, but no further questions were asked. The only problem was that my artistic arranging gift was questioned. He replaced the bird in the garden as I had it too near to the apartment window, but we are now all happy. The bird is happy, my orchid is happy amongst its brothers and sisters, and I turned twenty swiss francs into thirty, but only paid ten. Oh, we women are so clever.

Today was the day after the Swiss National holiday in the supermarket. The shoppers were ripping the food from the shelves, I even had to queue at the butcher’s counter for my meat and we forgot the milk and grit for the cat tray. Tomorrow is another day and Mr. Swiss will go on a quest tomorrow morning for the missing items. We still have two litres of milk and the felines can use the garden in the meanwhile.

And now to the prompt. I am sure you are all waiting to hear what I wanted to be when I was younger, the problem being I cannot really remember. I did not want to collect orchids or have a big metal bird in a garden. There was something about being rich I think, but we just made do. Then I really wanted to be a cowboy like the Lone Ranger, but without the mask. Of course I wanted a dog, something like Rin Tin Tin, but mum said no and when mum said no, dad usually agreed and living in a house built in 1884 with an outside toilet and no bathroom would not be the ideal place for a fully grown Alsatian. I wanted a cat, and I got one, but I was then eleven years old already. The only reason we had a cat, known as Whisky because he was black and white, the same name as the whisky brand, was because we had many lonely mice in the neighbourhood looking for a place to live. Mum did not like mice for some strange reason; she was actually terrified of them, so the cat moved in. I do not remember him ever killing a mouse, but she felt safe, so a childhood dream was half fulfilled, we had no dog, but a cat.

As I did not have visions, I cannot be close, but I succeeded in achieving a few that I never had. I think we have all been there and done that on my blog journey before so I will not bore you how I left the safe shores of England for foreign parts, known as Switzerland, met my rich Swiss banker, who was not a banker or rich, and ground the Swiss Family Robinson Angloswiss. My dream of becoming a well-known blogger is yet to be fulfilled. I once ordered a WordPress t-shirt, yes really – no joke. It arrived. I ordered the largest size possible, but discovered it was too tight to fit my contours. I have it. I complained and had the option to return it, but sending goods with TNT/UPS/DHL would have cost more than the original t-shirt, so if anyone would like a WordPress t-shirt in dark blue with white lettering, you can come and pick it up.

My dad is arriving home again in his apartment today. A week ago he was delivered into hospital, had a pacemaker fitted to his heart, terrorised us the main part of the week saying someone had stolen his telephone (he forgot he was in hospital) and someone stole his Swiss army knife (a present from Mr. Swiss, which he had not taken with him to hospital). Eventually he decided he could not walk any more. Two days ago this miserable state of golden oldie terrorism changed. He was moved from a single room to a ward with three other platinum oldies. Things started happening, and he no longer had time to worry. Thanks to my good friend in England, I had contact with him through my iPhone. He is 98 years old and of course he is always right. I am always right, I am in training. I will be 68 years old this year, so just imagine the nuisance I will be if I reach 98, but one thing I know, I will still be blogging. I might start my own blogging group, “Blogging with the Golden/Platinum Oldies”.

Have a nice week-end – see you all on the flip side.

Daily Prompt: Futures Past, A Bird, Orchids and a few childish Dreams – and my Dad