Write a post about any topic you want, but in the style of an author or a blogger you admire. 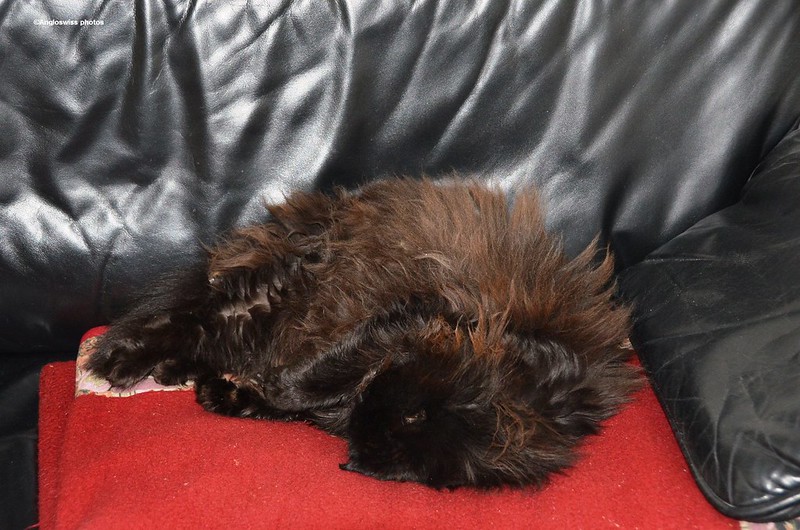 I might have a few admirers, like Mr. Swiss, my three felines and perhaps even others that may be addicted to my daily words of blog, but please do not even attempt my style, I have enough difficulties with it myself. In this sense, I will repay the favour and not attempt to copy any styles that my colleagues-in-blog have, no way. Even my faithful feline decided that it would be more worthwhile to take a catnap than read my words of wisdom.

Now I am left with any topic I want and what could be more suitable than a Voting Sunday in the Life of Switzerland. Yes, today our votes will be cast again: a regular event in the political life of this little country, about once every two months according to our great new ideas of improvement. Last week Mr. Swiss thrust an envelope in my hands and said “sign”. Of course I wanted to know what I was signing, although I do trust Mr. Swiss, but his ideas are not always mine. He had neatly completed the voting slip with Ja and Nein according to his ideas (yes and no) and all it needed was my signature of approval, although he did not say so much about approval. Here a small description of what I am to decide.

In the case of citizens that confuse Sweden with Switzerland a small explanation. Switzerland is much smaller and it might be that you enter our country and leave without even noticing you were there. Sweden is much larger, but there is a connection and not only the name. Today Switzerland is giving its approval (or not) to our government to buy a Swedish plane to replace the planes at the moment in use in our Swiss Air force. Yes we have an air force, it is just the navy that does not exist as we also have no ocean.

The Swiss government are very clever, they chose a plane that it so new that when they decided to buy it it only existed on paper, a design, but it looked quite pretty and it seemed to have everything that a plane should have, like wings, an engine and a tail end. To fill you in on details it is known as Gripen – you have never heard of it? Neither had I. Eventually one or two examples were seen flying over our alp scenery, being followed by the keen eyes of a couple of politicians and many camera lens belonging to a few Swiss Citizens who happened to be in the right place at the right time. Of course these aircraft looked good, very dynamic and there was even a film on the daily news programme. However, Switzerland is a federal country, a democracy and before the government pay a few million to the Swedish for their new, super, never before bought aircraft, the people give their consent. Today the deal will be made or not. I will not say what Mr. Swiss voted (which is also my vote – we almost always agree), but I am really only interested if my car is OK as I cannot fly a plane.

Of course there are other points on the list. We are voting for a minimum wage. It seems the amount stipulated by the government, 4,000 Swiss Francs per month, is considered a little high by many. In fact so high, that if accepted, it would probably mean the ruin of many small companies. I do not wish to go into details, but I have a handicapped son (autistic) working in a local factory. If something like this is accepted, then he and many others in his situation would probably no longer have a steady job, so there again Mr. Swiss and I agree.

There is also something about doctors and medicine and I really do not know what it is about, so I left that to Mr. Swiss and just signed regardless. He being Swiss understands it all much better than me. It is sometimes very confusing living in a country with almost eight million population to decide on how things should carry on.

There are a few other local issues, something to do with energy and a new organisation. Another point is to decide on which days you are allowed to have a kantonal (Kanton=State) holiday or not. Being a golden oldie, every day is a holiday, more or less, so I have no idea what I voted – I am sure Mr. Swiss put the Ja or Nein in the right place. We also have to decide on a law in connection with hooligans at sport occasions. Who pays for the damage, searching people attending the occasion etc. etc. I do not attend sports, but prefer to watch on the TV, so there again, I just signed.

As you can see everything is Switzerland is organised, planned and runs like clockwork, although our banks might sometimes make little mistakes costing a few thousand, but that’s life.

Otherwise the weather is perfect, sun, fun and voting to do – and up to now no magical grid with the new great look, but things can only get better.

And I have written this blog in my own style, not the best, not the most perfect and definitely not worth a Nobel or Pulitzer prize (but who knows?). It did say a blogger you admire and as I walked past the mirror and caught a glimpse of my reflection …….. I am sure that tomorrow our grid will be up and running again, all our hard written blogs will be seen and acknowledged. Nobody is perfect and we will kill the WordPress grid demon eventually.

Daily Prompt A Form of Flattery, the Swiss Voting Day and where’s the grid

Is it me, is the revenge of the daily prompt demon again active, or perhaps I am imagining it. We have no entries it seems, so I sent a little message on the forum to remind them to do something.

I will write something, although I must say I am not so inspired by today’s prompt, as I write in my own style and that gives me enough problems. Nevertheless, I will carry on regardless and see if something might happen.

Oh, and here is the link to my forum complaint, in case anyone else wishes to add on to it. Naturally I reminded them that today it is not working again