Tell us about a time when you managed to extract yourself from a sticky situation at the very last minute. 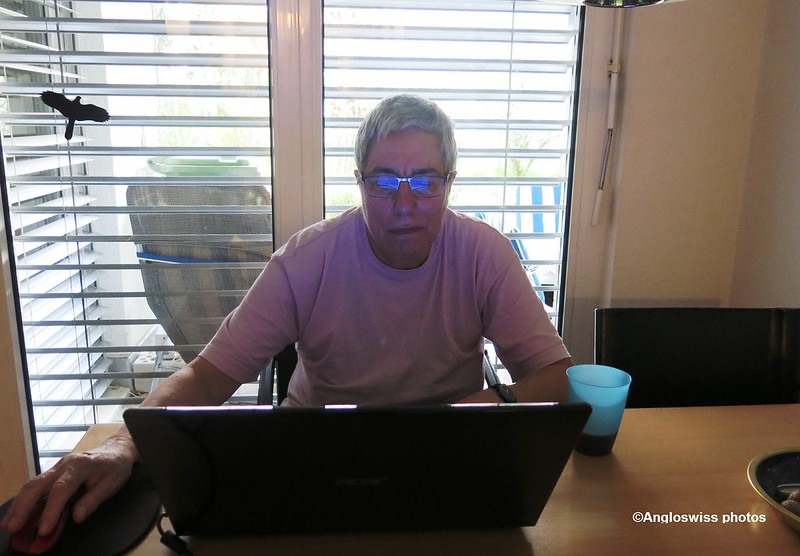 Here I am in action, ready to attack the daily prompt. My computer is alive and I am delving into the workings of WordPress to see what in on the daily menu. Will it be a request to tell about a time when my success in the blogging world of literature changed my life? I do not think so, they are still busy with the great new look and so am I.

Otherwise my life is full of sticky situations; it is a wonder that I reached the status of golden oldie. One of the biggest sticky situations I have regularly is writing the Daily Prompt. I awake from my golden oldie midday sleep and my computer sits on the table ready to go. The problem is often, that I am not ready to go, still feeling the wonders of relaxation in my brain and not ready for a remarkable blog full of the events in an Angloswiss life.

Today is Sunday when nothing really happens. I have no spectacular visit to the local supermarket, no events in my apartment cleaning programme, just complete nothing – except for the Daily Prompt. I am told to write about extracting myself from a sticky situation at the last minute. Do I have a sticky situation? Of course I do, I have to tell everyone how I get out of this. No Problem, I could ignore my computer, and tell him today no blog. Then I have to sooth his nerves, stroke his bytes, and perhaps remove the milk stains from the keyboard, caused by my breakfast cereal in the morning.

“What about the daily prompt?” I hear a digital voice.

“Did someone say something?”

“Yes, your computer. I am sitting here ready to digest your brain waves and your ideas. Without me you would be nothing, no-one would know you; your blogs would not exist and I do not want withdrawal symptoms.”

“Ok, so what do I write about today?”

“I am not here to think for you, I just carry out the orders, so start typing.”

“Shall we ask Mr. Swiss, his computer has a few sticky situations? It even lost contact with the cyber world last week.”

“I know, we had quite an exciting conversation about it, but thanks to his comprehension of Son of Bill Gates Microsoft he solved the problem, although we did have a few thrilling and breath-taking moments. Microsoft Office went on strike; it was neglected now and again. I think it wanted more attention. For a while you could hear a pin drop, the air was alive with suspense, but around midnight the solution was found. The next morning life began with a new meaning, even Outlook was re-installed (in French?), but we Swiss are multi lingual.”

“There you are Mrs. Angloswiss, you did it.”

“Wrote your daily prompt: my bytes and circuits are now exhausted with your ideas and I am ready for a shut down, but don’t forget to empty my storage of all those strange sites you visit. Facebook blocks my brain with useless rubbish. Let the crap cleaner run to cure any blockages and of course the Malware bytes as well. I do not want strange things poking around in my components, or in my sensitive parts.”

“Are you finished computer? Computer? No answer.” Perhaps I imagined it all, computers do not hold conversations. And now to clean away the milk stains on the keyboard – you never know.

Daily Prompt: Saved By The Bell – The Daily Problem