If one of your late ancestors were to comeback from the dead and join you for dinner, what things about your family would this person find the most shocking? 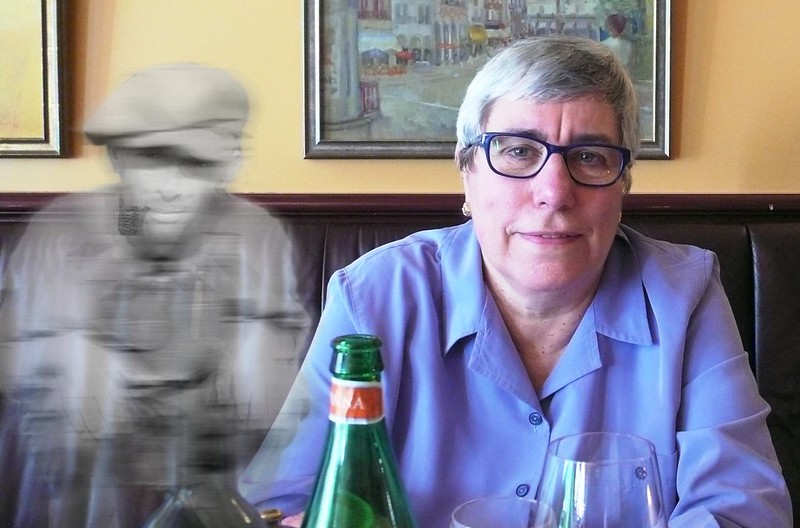 “Someone is at the door”

“But we are ready to go out to lunch in our favourite restaurant. It is Sunday and I was looking forward to a nice relaxed lunch.”

“I will open the door and see who is there.”

There was suddenly a crash and bang and Mr. Swiss came running to see what had happened.

“Well I knew you would be glad to see me again, but I did not expect that reception.” And granddad was standing at the door. In the meanwhile I had recovered and had pulled myself up to a standing position.

“But granddad, I thought your were, well, like dead. We buried you more than fifty years ago. I was at your funeral .”

“I know, you was,  the one that threw the bunch of flowers on my coffin, nearly woke me up. Now I am here for lunch.”

“Grandad, people that have sort of gone on to the happy hunting grounds do not return for lunch. Is this a joke?”

“No it is not a joke and I am hungry. After 50 years of starvation I am longing for a nice Sunday roast with all the trimmings and lots of gravy. Your mum always put a lot of gravy on my food. WordPress said that you would be expecting me today, it is the daily prompt and their boss, Nick, told me to just knock on the door. You would love to see me and be able to write all about it on the Daily Prompt.”

“Err, well grandad, it’s like this, it seems there will be no daily prompt today. The system is not working and we cannot post it on the Daily Prompt grid on the computer.”

“What’s a computer? Where I come from the only grids I know are the ones with fire and smoke. I have not got the time to wait for a letter to be posted. How comes there is no inviting smell from your apartment of food cooking. Your mum’s place was full of the aromas of cabbage, stew, apple pie and custard. It smells like nothing here.”

“That bloke looks like your grandad” said Mr. Swiss, “although a bit transparent. I thought he was dead.”

“Who’s that geezer and how comes he ain’t talking English like we did.”

“Yes grandad, well Mr. Swiss is Swiss, he is my husband and I live in Switzerland. He is only talking English so that you can understand him.”

“What’s wrong with London. It survived two wars if I remember rightly and it was good enough for me to live there with the family.”

“I moved and met Mr. Swiss and we got married.”

“Oh yes, but one does not live here and the other is not around at the moment.”

“It’s Sunday, the family is always together on Sunday.”

“Things have changed granddad. The world has got smaller and the old customs are disappearing.  So now you are here and WordPress have told you to arrive, I suppose we will have to take you with us for dinner.”

“I ain’t going nowhere, I want to eat with my family.”

“Climb in the car, we will take you with us, otherwise you can starve” and Mr. Swiss spoke a commanding word. After more than 50 years of no food, grandad decided to come with us.

It was a bit strange in the restaurant having a sort of transparent person sitting at the table. Worst of all was when he ate the food served. It was sort of visible as he swallowed it and he said he did not like it. I suppose spaghetti al pesto was not the sort of thing granddad would go for. He qualified it as foreign muck, although I noticed he asked for a second helping. He got a few strange looks from the personnel in the restaurant and other guests, but probably because he kept his cap on all the time.

After drinking a few pints of beer and smoking about ten cigarettes, which he brought with him as he always rolled his own, he said he would have to go. Old Nick, his boss said not to be too late, he was expecting a few new visitors and wanted granddad for the welcome committee. There was a sudden green puff of smoke and granddad was gone (which was a relief).

And now to post today’s offering and hope that no puff of green smoke will hide it from the others. Today is one of those strange days, grandad arrives at the door and the grid has sort of gone to another dimension.

Daily Prompt: Modern Families and no connection available on the daily prompt

If one of your late ancestors were to come back from the dead and join you for dinner, what things about your family would this person find the most shocking?

Ok, today there will probably be no prompt from me because the super duper wonderful WordPress grid system is again no working. There are zero entries as far as I can see, but this is not true, there are many, only my super new great new look is not showing them and this time I am not wasting my energy to write something on a page where other entries are not visible to me. I will post this and if it works will be back.