In honour of Labor Day in North America, tell us what’s the one job you could never imagine yourself doing. 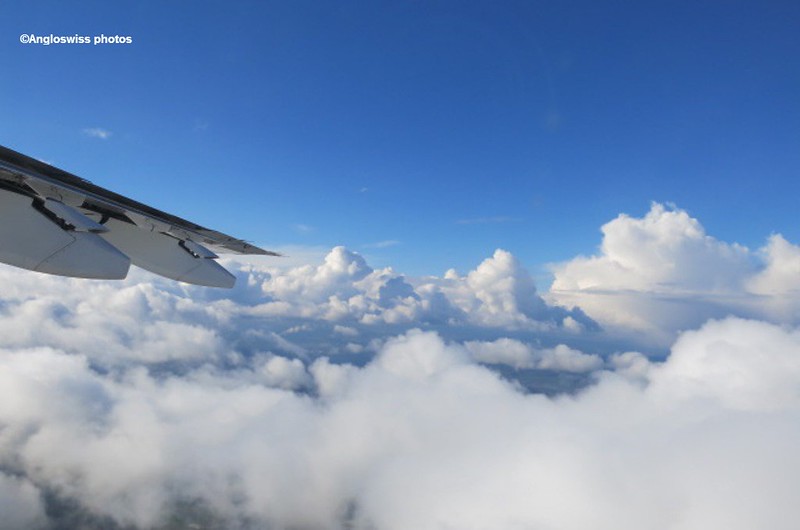 Definitely not pilot. It is Ok to sit in a plane to get where you want to go. The distance between the soles of your feet  to firm ground is too far to actually enjoy it, but it was a nice photo to take somewhere over France I think.

We do not have a labour day in Switzerland. I believe we have no labour days anywhere in Europe. We just go to work to earn our living, if we want to or not. I like the thought of a labour day although the idea is strange to me. Does everyone stay at home and do nothing, something like the jewish Sabbath on Saturday? I remember my mum telling me that when she was a kid there was some pocket money to be earned doing jobs for those of the jewish faith, as work was not allowed on Saturday, but correct me if I am wrong.

Mum told me all sorts of things when I was growing up which I discovered were not true. She even told me she found me beneath a gooseberry bush when I asked her where babies came from. Of course this was wrong, she found me beneath a rose bush, or did the stork leave me in front of the door wrapped in a cloth that he had carried in his beak. I never did get down to the truth.

Anyhow the job I could never imagine myself doing is the one where someone tells you what to do. Unfortunately this sort of job does not exist. Even if you are the boss, the bank tells you what to do, it is one vicious circle. Unfortunately it seems that people were born to work and obey. Even ancient caveman was told by his wife “kill animal for food and light fire” and ancient caveman would drag his caveman wife by the hair to the fire and say “wife, cook animal”. Wife would cook animal and man would eat it throwing the bones all over the cave. Who actually had to clear the bones away is left to discussion, but someone had to do it, and so labour arrived.

I have done most things in my life. Served in a restaurant, cooked daily for 40 kids and 12 adults in a children’s care place, been an export clerk and even taught English in evening classes. I was accountant for the local first aid society, but that was the worst job of all. I was given the job because I was the only person in the organisation that knew how to use a computer. Dealing with accounts is not fun, especially when you have an audit once a year. It was a job I did at home, but it was a job with a lot of responsibility. It was not a paid job in the sense of the word, but I did get my perks. There was always someone that knew everything better and I was glad to give the job up. I had problems finding someone to take over, which was obvious. Not everyone likes to do such an unthankful job.

Why did I go to work? To earn money, to put food on the table and clothe the kids. Mr. Swiss naturally also worked, for the same reasons. We did not really have a choice. At one time we had four kids and they were not working kids, they were either at school or babies.

I could never be a vet. I would probably come home crying daily about the poor little animals that would suffer. Being a soldier would also not be my thing. You get action when there is a war and what do you do in the war? Yes exactly, not my sort of thing.

I never really found my dream job. I often wondered if undertaker would be something. You are unique, no problems with unemployment and the money is good. The clients are quiet, do no argue about their treatment and those that pay for the service do not generally question the costs. There are also variations on the methods used to bring a little variety into the work,  but we do not really want to go into details.

Now I am a simple housewife and Mr. Swiss is a houseman. Are we happy in our work? We receive a monthly wage from the government for being retired and have no-one to tell us what to do. We arise and retire when we want to. We now work as being senior citizens. Some might say end station, but we just say you never know what is around the corner, so why worry.

On this happy note I will leave you and enjoy your labour day.

Daily Prompt: Nightmare Job – all work is a nightmare