Do movies, songs, or other forms of artistic expression easily make you cry? Tell us about a recent tear-jerking experience! 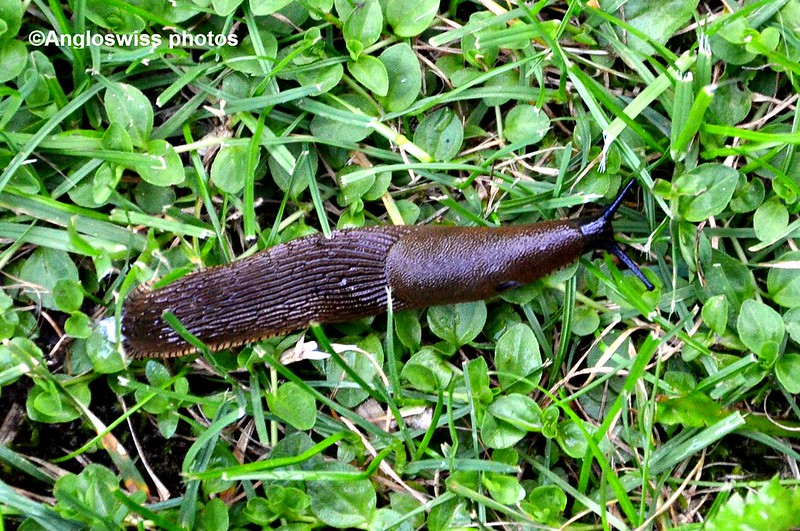 Perhaps a slug sliming its way over my garden might be an artistic expression of movement, of nature at its basic best. Not that one slug made me cry, it is only in the evening when it is time for the daily slug gathering that I am near to tears. I do not feel sorry for them and tears fall down my cheeks whilst I am removing them from the garden, throwing them in the nearbye field and hope that they make a crash landing and perhaps depart from their worldly existence. I hope they are gone forever, although it is obvious that the next day they return, at least their offspring. How many kids do they have when they give birth? Must be at least a hundred, there is never a shortage of replacements.

I avoid watching movies about animals that might be killed or reading books on the same subject. This could move me to tears, so why should I read those books. There is a film called War Horse about the usage of horses in the first world war. I read about the so-called “pit ponies” that were used in the coal mines of Wales. This is not entertainment for me.

A constant cause of tears are politics. I do not want to write a political blog, it would not change the world, but the way that our so-called leaders are organising things at the moment it is a cause for tears. They all seem to think they know it better and no-one really does. I am convinced if there would be a war, no-one would really know why or how it started. Each politician has their own interpretation of what is going on and the pawns in the game are the people, like us. We are moved around on some sort of Google map and have no way of objecting. If that is not a reason for shedding tears, I do not know what is.

For a happier theme I happened to chance on a spoiler for the only soap I watch on TV. Actually the only programme I bother to watch. I told Mr. Swiss not record it next week as I do not like the developments described in the spoiler. Doom and gloom and a few dead ones (might be babies – they did not say exactly who will be killed in the house fire), but I am not a happy bunny. I am not a disciple of a soap series to be disappointed by turns in the plot that do not comply with my ideas of a happy-go-lucky soap. If they want to kill off the villain that makes everyone’s life a misery, then OK, but not exterminating complete families by an accidental fire for insurance reasons. No, that is not my sort of thing.

Then, of course, we have the Daily Prompt. Now if that is not a source of tears, I do not know what is. Every day we are at the mercy of a WordPress t-shirted guy that has a dream. Admittedly he has good dreams, but now and again they crystallise into genuine nightmares. One day I am 68 years old in a 12 year old body, sometime  before Jane Fonda was giving advice about pains and gains, not to mention a t-shirted guy called Wordy that decides to remove all my mirrors and build a tunnel to somewhere I want to go. I am not even asked where and if I want to go anywhere. In the past I have even been asked to write my own obituary and this twice, when the t-shirt forgets that we have done that one before – and you talk of being moved to tears. These are often beyond tears, almost hair tearing and foot stamping, but – yes we all return. I must be a sucker for punishment.

I almost cried when the grid appeared on my WordPress site and when it disappointed me many times by not appearing as there was a problem. The staff at WordPress had been partying and forgot to organise the new prompt, or it someone put the whisky bottle on top of the main computer and the screen was invisible due to clouds of cigarette smoke. I was almost happy last week when I saw the new posting experience. One day later I was again near to swamping my keyboard in salt water as I became frustrated with the new system. I recovered when I noticed that we could switch back to the old posting experience.

There we have it. I am a completely emotionless person. I feel near to tears when I have to pay my sickness insurance. I feel sad when at the end of the shopping trip I pay at the cash desk. It is a moving experience when we fill up the car with gas. Gas is not free.

I am now thinking about a new computer. I am not sad about this, I would like a new computer and am 99% certain that Mrs. Angloswiss will be organising a Macbook. I have planned this financial settlement some time at the end of the year, beginning next year. Bill Gates go home and shed some tears, I do not like you anymore. You have one chance left – if Windows 9 will be a grown up programme and not a picture book like Windows 8, which I never bought, I might return to the fold, but to be quite honest I like Mac, I love it.

Have fun everyone and shed no tears on this daily prompt, just think it can only get better.

Daily Prompt: Moved to tears – don’t cry for me WordPress