A second #RoyalBaby will soon be joining the Windsors in England. Given the choice, would you rather be heir to the throne, or the (probably) off-the-hook sibling? 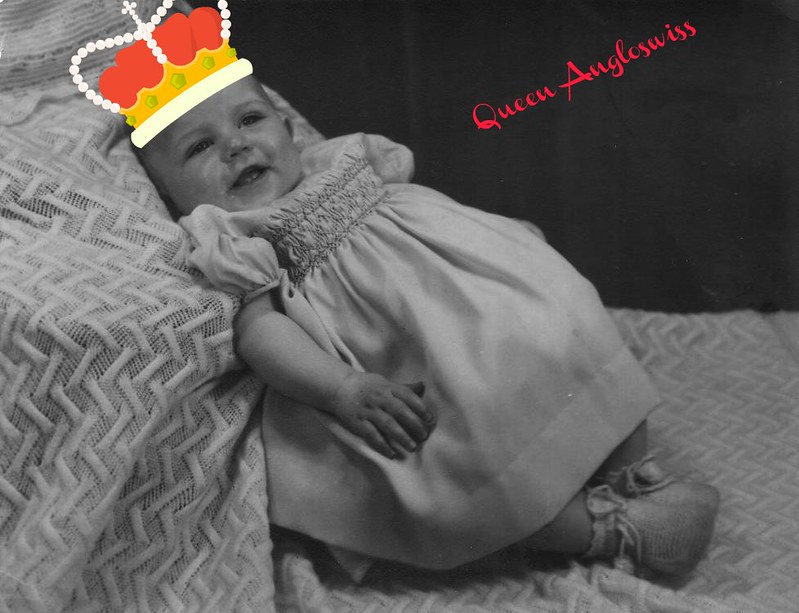 I know I am a modest person, and I like to move discretely in the world of WordPress. Who am I to show off, but in this case the truth must be told. When I arrived at my parents’ house, there was a soft knock at the door and my mum and dad approached to see the tip of a stork wing just leaving. They found a small basket in front of the door containing a baby. I had arrived. Unfortunately the stork made a mistake and dropped me at the wrong door. If she had flown for another thirty minutes, as the storks fly, I would have arrived at my true destination. Buckingham Palace which was not too far away. They were probably misguided by the bomb damage in London as it was 1946, just after the war and must have lost the way.

So there I was, complete with crown and name tab, ready to go. The first thing that happened was that my crown was removed and sold. At least there was enough money to buy the diapers and the milk. As I grew older I realised that something was wrong somewhere. Instead of having a maid to wait on me, I had a mum that did almost everything. I was not eating from bone china, but just crockery bought at the local Woolworths store. There was no private tutor and I had to go to a place called school which I had to share with many other girls of my age – how common. My royally equipped brain told me that something was wrong somewhere. I felt uncomfortable in bought store clothes, mostly made of cotton. I was sure that this was not for me. Pure silk and satin would have been more my thing.

They called me Pat, which I thought was strange. If I had been called Patricia I would have understood it, but of course I was expecting Your Highness or Princess Patricia. Something was wrong somewhere. I tried calling my parents mother and father, but they took no notice, so to oblige I said mum and dad as the other commoners called their parents. .

The most difficult part of my early life was having to obey orders. I was there to give orders. I was even expected to clean my room; this was definitely not the intended purpose of my life. Luckily my mother/mum made my bed. I think I would have been insulted if she had not made it. A princess, ongoing queen, does not make her own bed.

I remember when my adopted parents (they could not have been my real parents, they did not wear a crown or drive a Rolls Royce) showed me Buckingham Palace. When I saw it for the first time I felt in my regal body that this should have been my destination, this was where I belonged. I approached the guard at the entrance and entered. I felt a hand on my shoulder and the guard looked at me beneath his bearskin hat.

“Where do you think you are going?”

“To see my family of course.” I was surprised that he did not bow to me.

“I think your family are outside the gates little girl. Your mother and father are waiting for you.”

and he turned me in the other direction. I stamped my feet and refused to go. My mother/mum seemed to be quite embarrassed and mumbled an apology to the guard, telling him that I always had a fascination for royalty. I was still stamping my feet and screaming “I want to see the queen”. I was convinced that this was my real family. At this moment I was scooped into my mum’s arms (how degrading) and we moved to one side. A large carriage pulled by two horses left the palace and I saw all the crowds were cheering and waving. I waved as well. I am sure the Queen saw me, but she did her normal hand wave and moved on. She did not recognise me.

Was I disappointed? Actually not so much. I saw her imposter children and decided that they were not so pretty as I was. They were dressed in silly clothes. No, that was not my sort of thing. I then realised that I should be satisfied with what I have, even if my foster parents did sell my crown and never bought me the corgi dog I always wanted. We did have a cat at home, but that was because of the odd mouse that wanted to live with us. Mum did not like mice.

So there we have it. I grew up in a common family, had to fight my way through life. I even had to work to earn money. I went to Switzerland and met Mr. Swiss thinking that all Swiss have gold bars under the bed and I eventually my status in life would be recognised. Unfortunately, even in Switzerland there are exceptions to the rule.

I never told my children of their real inheritance, I did not want to disappoint them. Being an off-the-hook sibling (what is that) has its rewards. Today I visited my Tai Chi class and when I arrived home I found Mr. Swiss had tidied the garden. Of course a gardener would have been better, but in Switzerland they do not have Kings and Queens, just so-called Bundesrat. One thing is sure, I am probably the only person with royal blood in my veins that writes a daily blog. Who wants to be a Queen?

Daily Prompt: Next in Line – The Stork made a mistake