Clothes and toys, recipes and jokes, advice and prejudice: we all have to handle all sorts of hand-me-downs every day. Tell us about some of the meaningful hand-me-downs in your life. 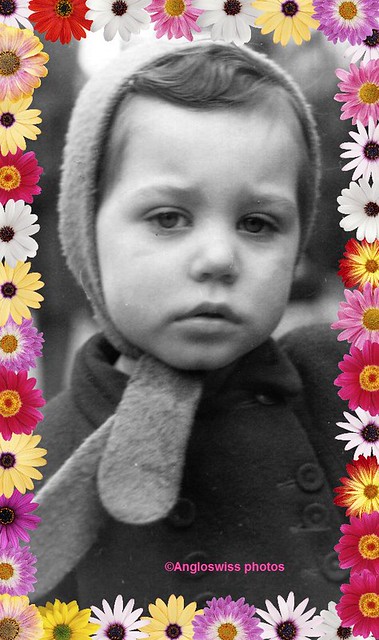 There were times in my life when I wished I had be given hand-me-downs. Anything would have been better than this cheap felt bonnet and Princess Anne look-alike coat. “As long as it was cheap it will do” seemed to be the motto at home. I was a unique child, so unique that mum decided I would be the first and the last. I was probably very lucky. If I had had an elder brother, I would have been walking around in short trousers and shirts. It was 1946 and the lucky part about this new generation was there were few hand-me-downs. The men had returned from the war and married. The baby boom would arrive nine months to two years later and I was part of this boom.

Few of us had older brothers or sisters, we were the first and so everything we were given was new. Unfortunately it was post war style. It was produced with anything that you could lay your hands on and so not the best quality. On top of this your mothers had to be creative. My mum was not creative, if it was cheap buy it. She won’t notice. Mum forgot that years later when I delve into the treasure chest of old photos and discover that I was a post war child and mum was probably colour blind. Who cared if they matched. Luckily I only wore the felt bonnet on cold days, bright bows of yellow or red ribbons in my hair were used for the warmer days. In some photos I resemble a Russian school child in the days of communism.

Our home was one big hand-me-down. I do not remember that my family bought furniture without a background story. Either it fell off the back of the lorry or an uncle’s family no longer needed it, because they had something new. “That will do nicely” was mum’s motto and dad was always happy when he did not have to delve into his trouser pocket, where he kept the family bank, to pay the full price for something.

Sometimes a relative died, although they were usually the ones that were quite ancient, almost mummified. There was always some furniture to inherit, or artifacts. We never bought a book, although we had books. They were heavy leather bound books with gold letters “Battles of England”, “The History of India” and “The History of England” in eight volumes. As they were inherited from grandad who had bought them as a young man some time at the end of the 19th century, beginning 20th century, they were regarded as treasures. No-one actually ever read one, but they might be worth a lot of money. I even organised the transport from England to Switzerland as my dad decided they should stay in family hands. I checked on Internet and actually found them, but not a valuable find. It seemed every Victorian family had a set at home: probably they were given one free with the daily newspaper.

My family loved free things. My dad had a great collection of DVD films. He got them with the newspaper once a week. When the newspaper arrived my dad would scan it for a coupon showing discounts on various food items. It was his hobby in his golden oldie years (he is now platinum oldie). He would cut them out of the newspaper and organise them in little piles according to the products. He showed me with pride the coupons enabling him to buy a jar of instant coffee at 20% off. Unfortunately my dad did not like coffee, but that was not important. It was the thought that counted.

My dad moved at the beginning of this year to a new apartment in an extra care home. He was so lucky. It was modern, clean, fitted carpet and all he could long for. He took a few items of furniture with him. I joined him on the moving day. He had moved his settee. Sorry, but if anyone sat on the settee they could not stand up without difficulty. The seating was so old that it caved in if you sat on it. I organised a new settee in the week I was with him, but I am sure he still regretted that his old settee had gone to the happy hunting dump. He found it was a good one. He got it from a friend of a friend. I know he had it for at least twenty years. He moved a wardrobe. It was a mini wardrobe, although at the age of 98 you no longer have so many clothes. It was my old wardrobe. Mum and dad bought it for me when I was 15 years old and it was always too small for me, but ….. it was a bargain.

In spite of this I did use some hand-me-downs in my family. I had two sons and so of course the younger looked just like his older brother with his baby clothes. It was a matter of common sense.

I do not really have meaningful hand-me-downs, just meaningful memories of how it all happened. I survived. It was another time, another way of life. Today we are the throwaway generation and now and again a little bit of recycling. I am actually glad that recycling was not discovered when I was younger. I dread to think what my mum would have organised and how we would have furnished our home.

Daily Prompt: Hand-Me-Downs – I was unique